A customized tour of artisan Venice: Luca and Michele’s typogaphy

Discovering Venetian arts and  crafts Walking in the area of Santa Maria Mater Domini, a precious corner of the so called hidden Venice, it is quite easy to notice a fairly particular shop: to enter it, you have to step down, instead of stepping up.
The question that immediately comes to one’s mind is “how do they handle floods?".
If we observe their shop window, we then notice that the goods displayed are mainly postcards, bookmarks, posters, business cards, all obviously hand crafted: definitely, water can be a real danger for this kind of goods… 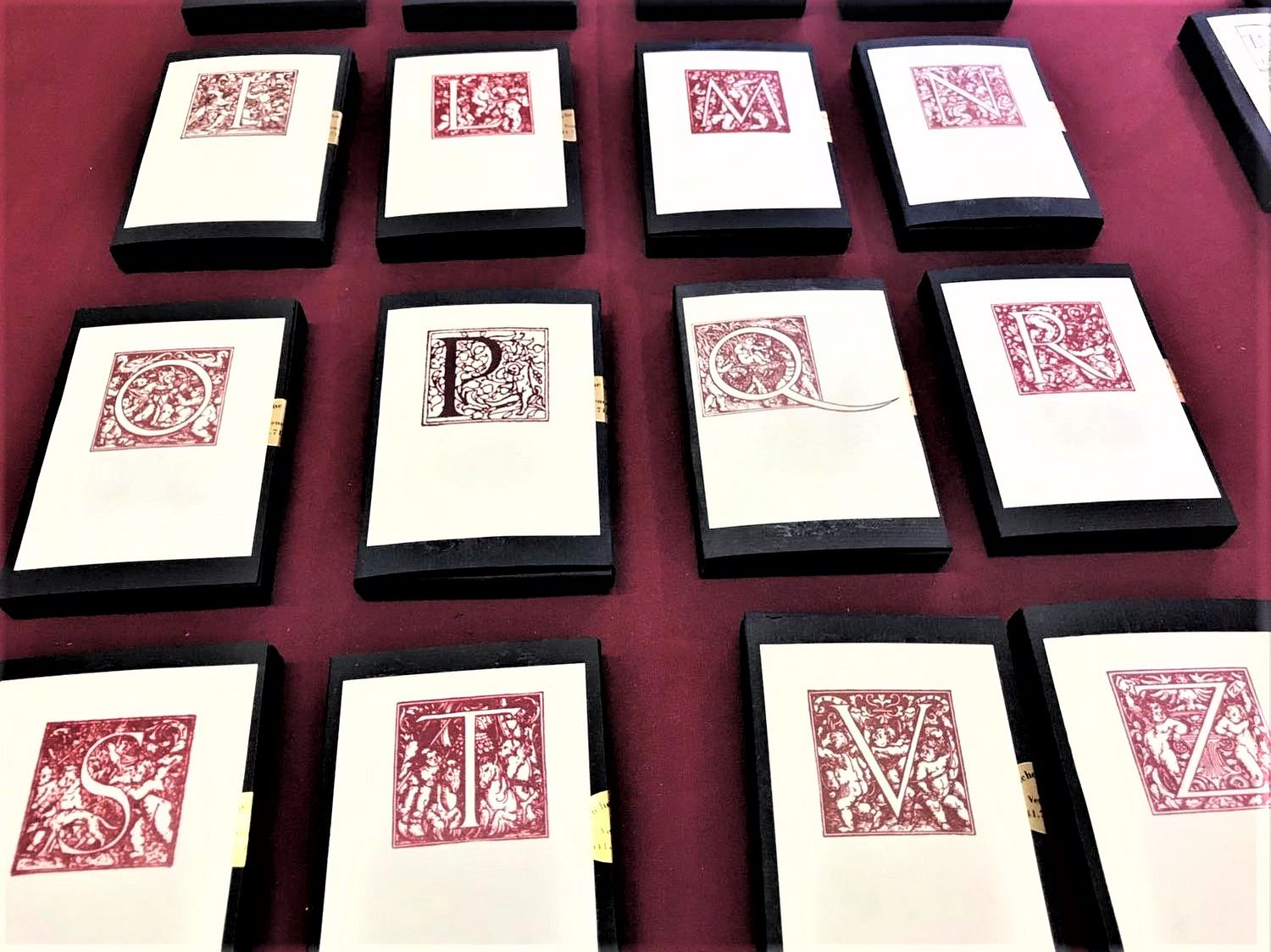 Still, Luca and Michele have been working here since 1989, after they purchased the business from their predecessors, who had started it in 1956.
Here they produce art and craft prints of high quality, using quite old machinery: a printing press with movable types of 1950 and a modern lithographic machine of 1968, both of which were produced in Germany by the Heidelberg company.
These machines need to be regulated entirely by hand, which means that great skills and experience are necessary requirements of the craftsmen that operate them. 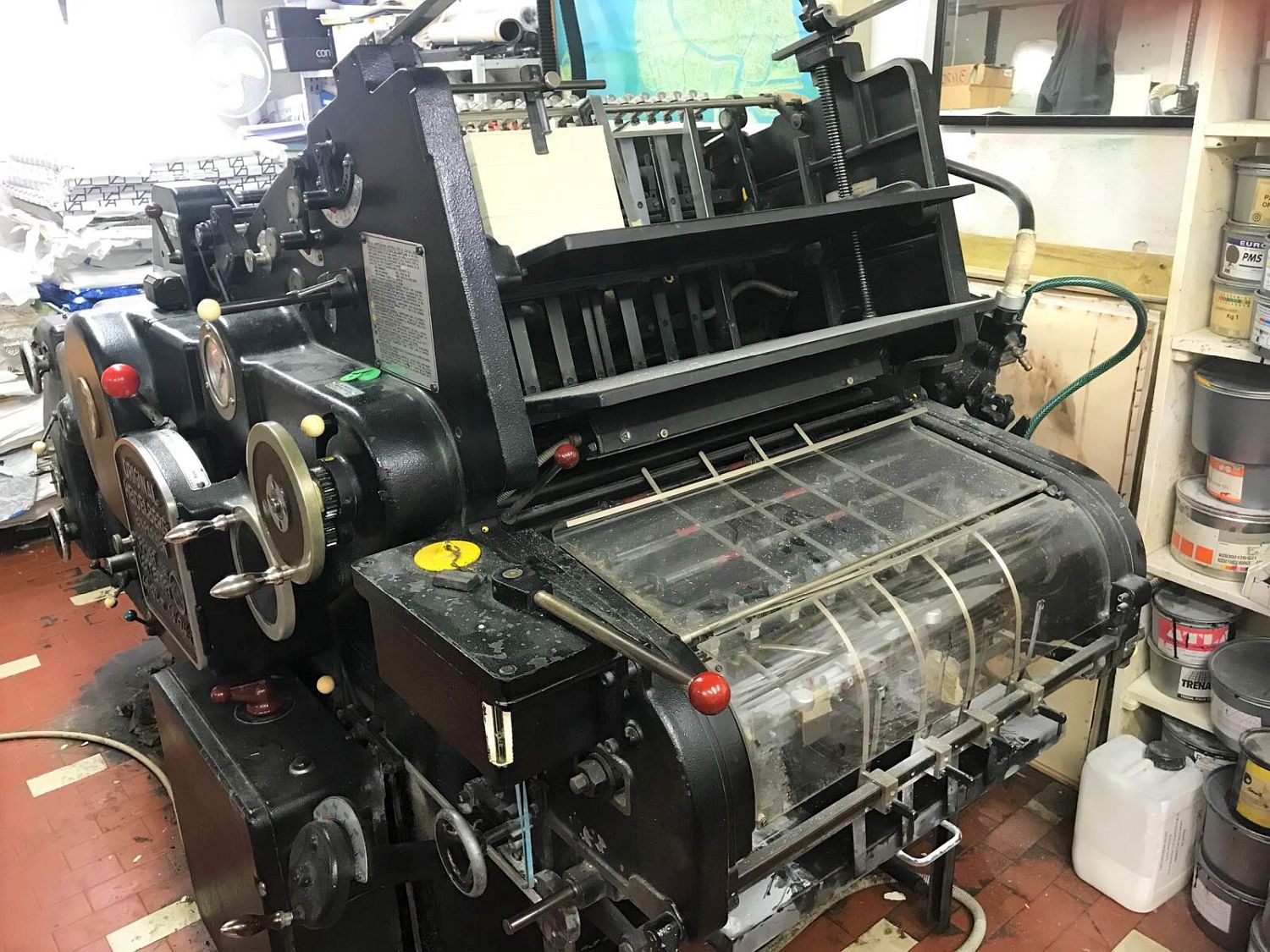 Immediately our thoughts go to Gutenberg… and then to Aldo Manuzio…
Gutenberg in 1455 invented the movable types for the printing press, thus starting a real revolution as far as book production was concerned.
Aldo Manuzio was the greatest book editor in Europe in between the end of the 15th century and the beginning of the 16th. He printed an incredible number of books in different languages. Among his renowned editions, perfect in every detail, we can find Hypnerotomachia Poliphili by Francesco Colonna and the critical editions of Ancient Greek and Latin writings. The so called aldine editions are still among the most precious printed texts. 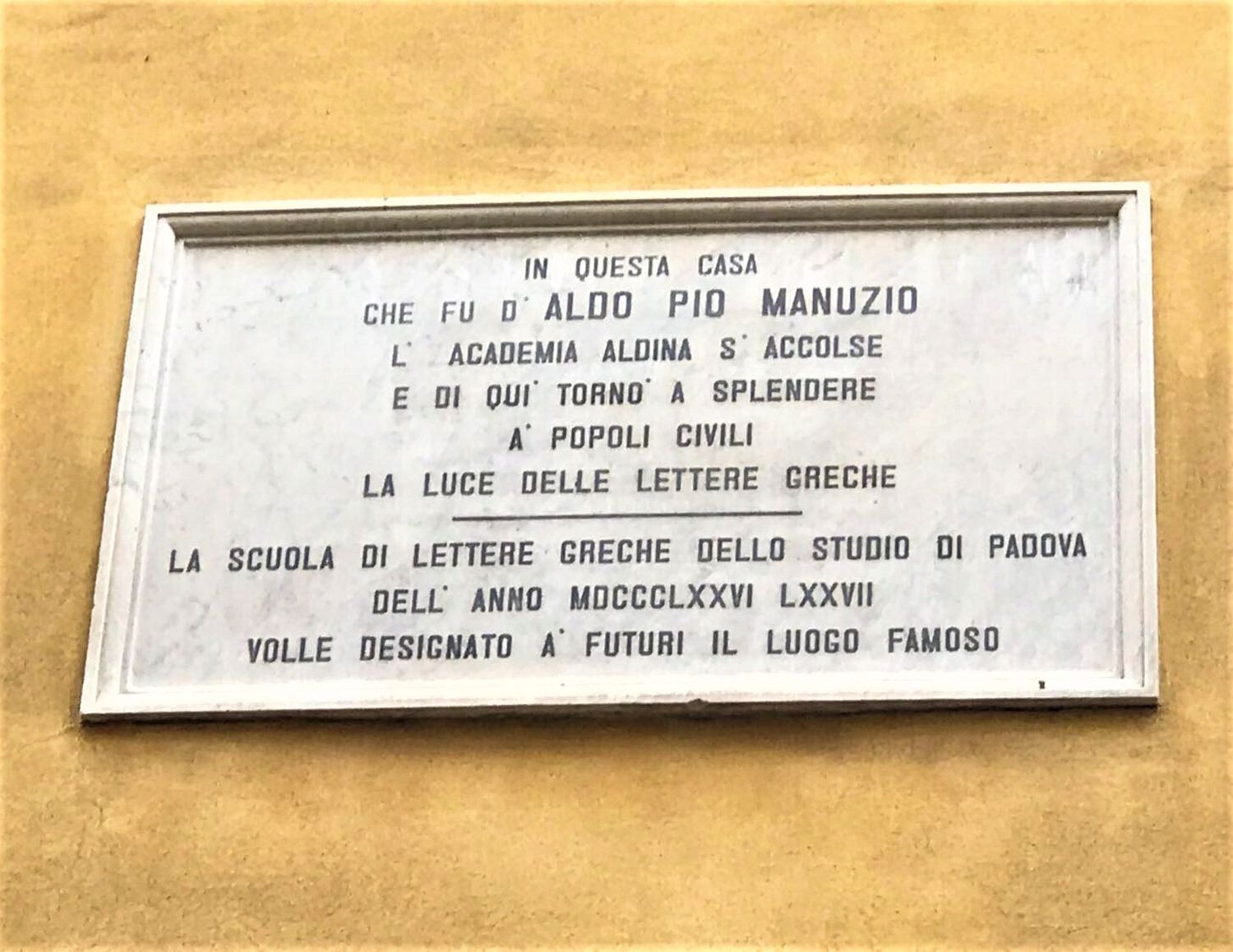 With great sacrifice, patience and passion, Luca and Michele try to continue an activity that has recently suffered from the strong competition of the modern digital technologies.

Luca opens the workshop very early, at 8 in the morning, as all workshops used to do in the past. Michele prefers to sleep longer in the morning, so he comes around 10 a.m. and then stays up to 7 p.m., when he closes the shop.
The one that was trained as an artisan of the printing press is Luca, whose father used to do the same job, employed at the Gasparoni Typography in Venice. Roughly 30 years ago Luca decided to open his own business, and he asked his friend Michele to become his partner: Michele answered with enthusiasm! 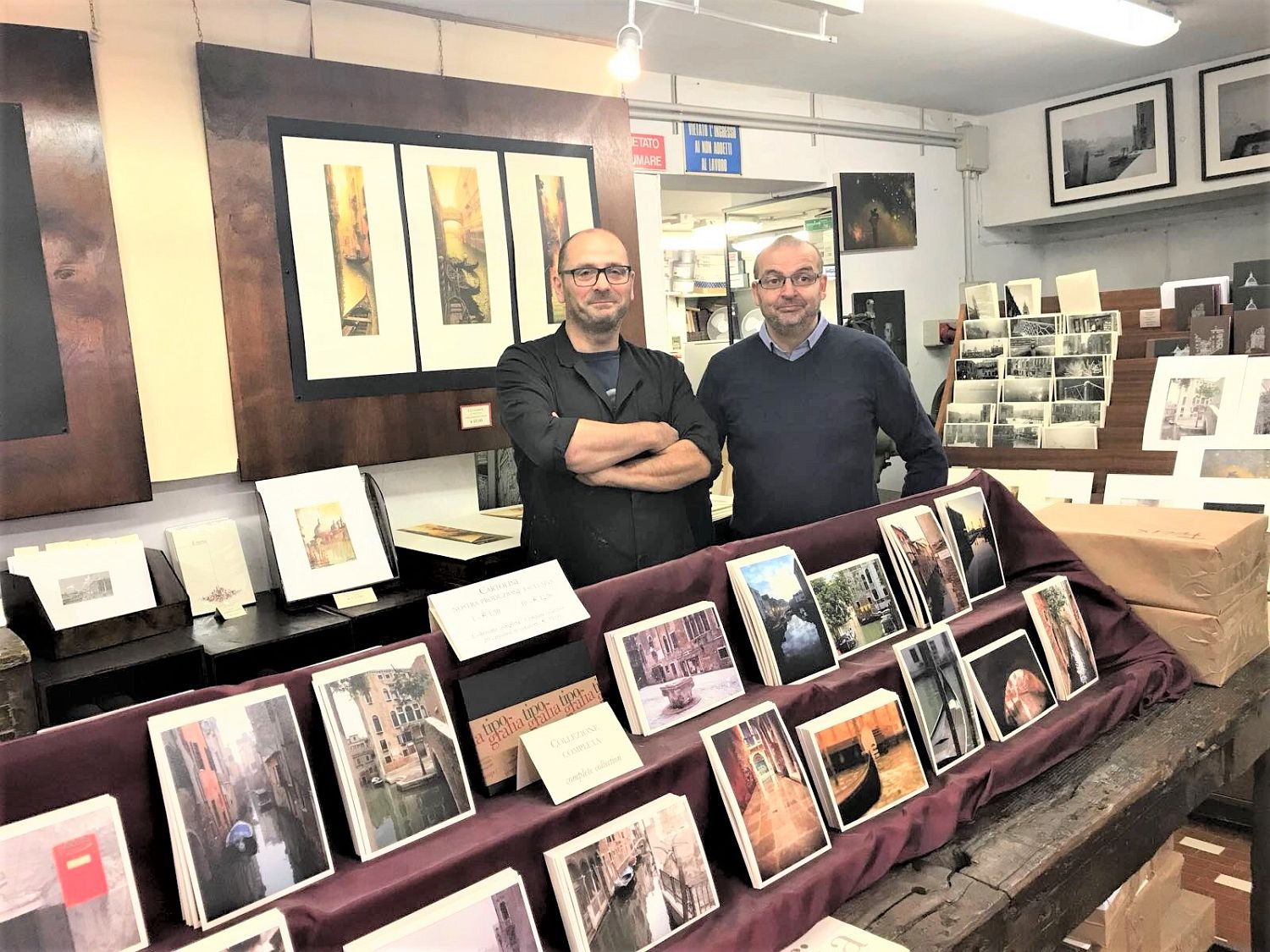 Luca and Michele in their workshop

To be artisans does not only mean that you continue ancient traditions, it also means that you have to keep the pace with modernity, as to meet the different, new tastes of your clients without betraying your own vocation. It means that you have to be extremely creative, inventing new forms which allow you to express your own personality. It is then necessary to make experiments over and over again, correcting and improving your creations, aiming to perfection. 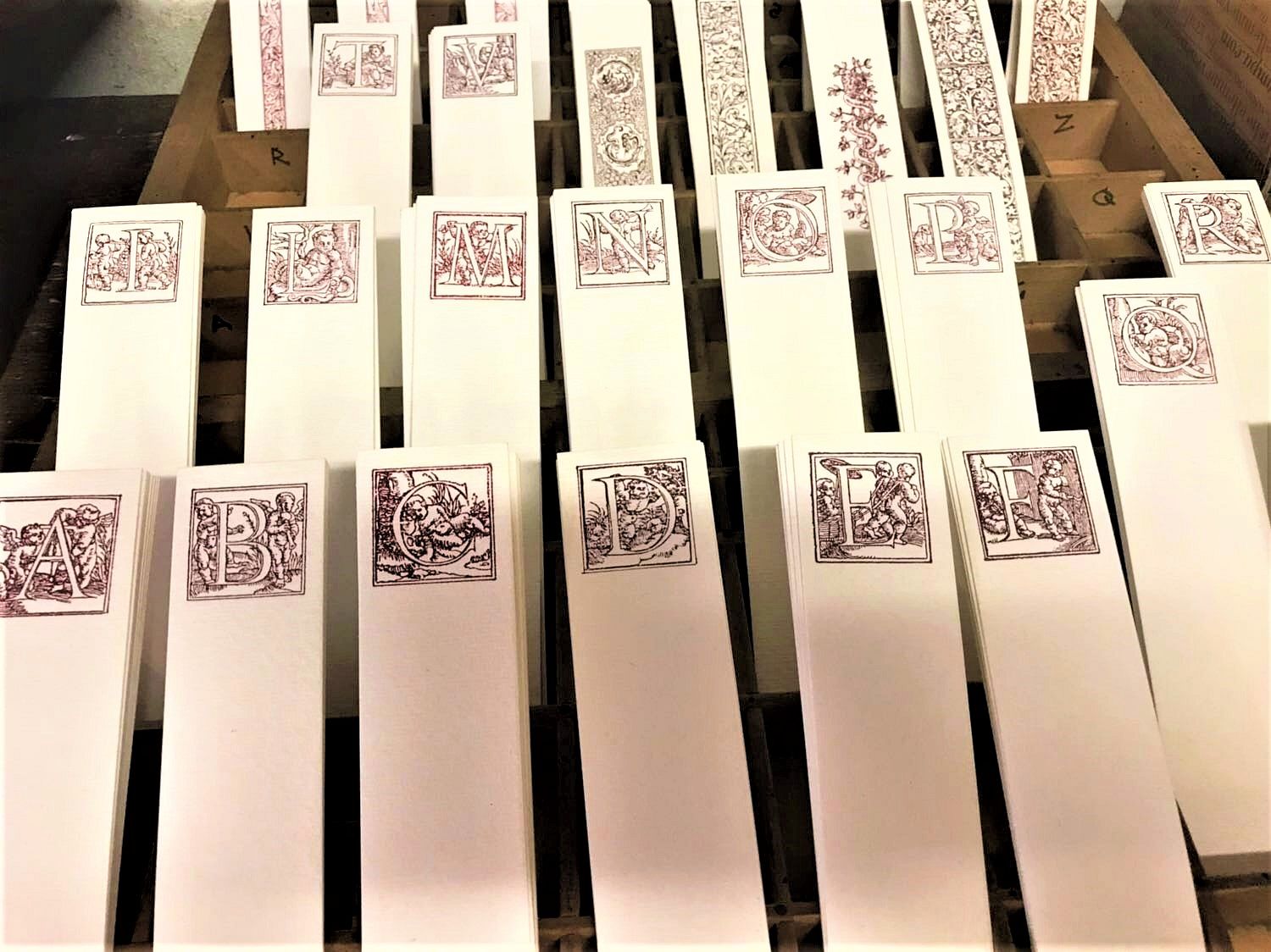 Together with the classic business cards, brochures and commercial prints, in this workshop we can find a series of original ideas.
For example, the ex libris… Ex libris, what’s this? It is a Latin phrase that indicates a small piece of paper or cardboard with original drawings or capital letters: attached to the frontispiece of a book, the ex libris refers to the owner of the book itself. It is a refined detail, with some sort of ancient flavor, something that we are no longer used to… But wouldn’t it be a great idea to rediscover it? You choose the ex libris you prefer, and Michele and Luca print it within a few days.

Luca is also very fond of photography, so he frequently walks around Venice with his professional camera in order to catch peculiar views, details, atmospheres of our magical city, and he eventually transforms such pictures in unique postcards. 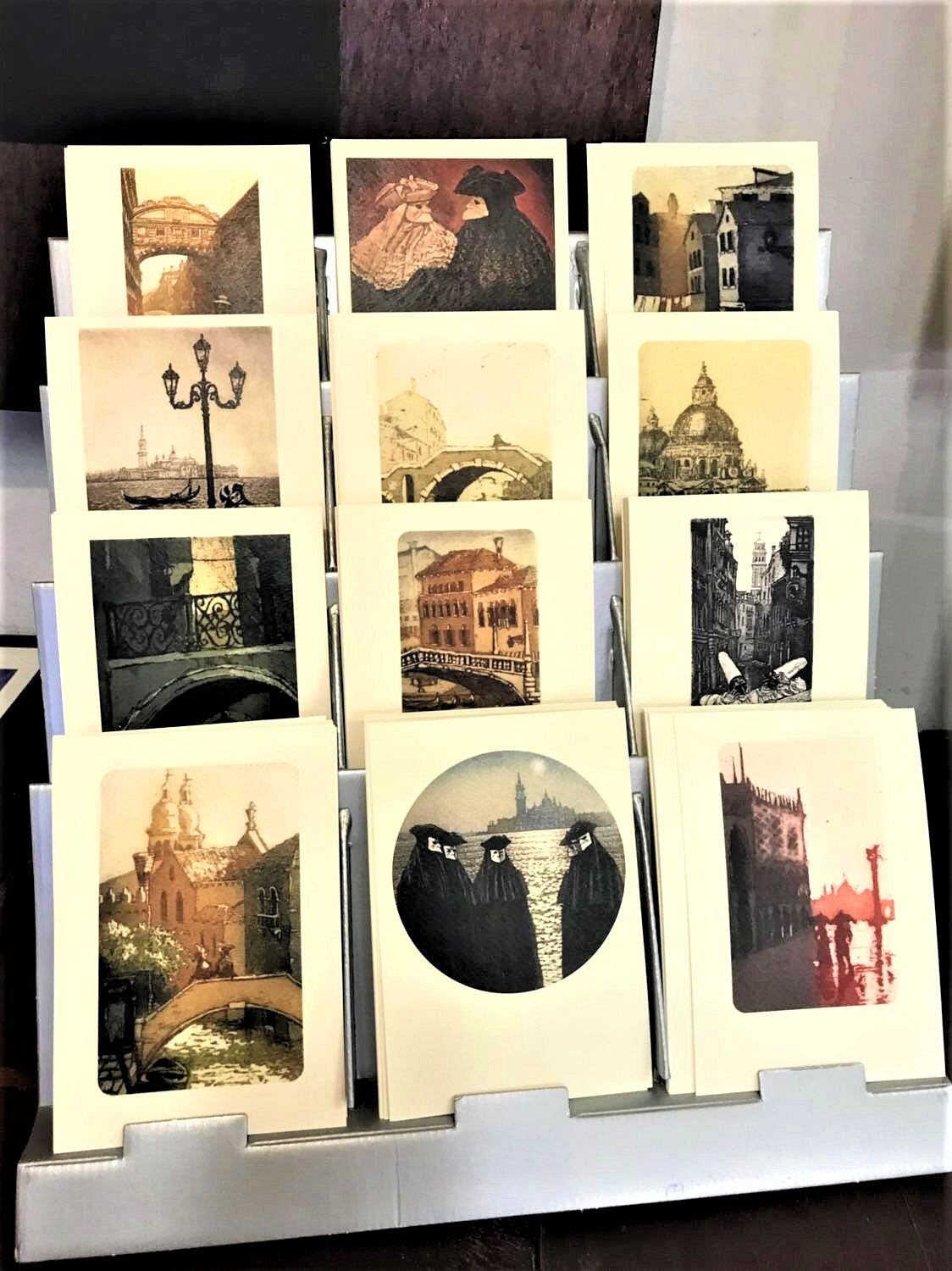 Quite a number of Venetian artists cooperate with this printing workshop: they create original etchings, representing mainly Venetian views, which Luca and Michele then transform in beautiful lithographies. Their aim is to distinguish themselves and their crafts from the dominating mass production.

The posters dedicated to the Venetian Carnival are particularly colorful. They are different every year, chosen among the great number of drawings that Luca and Michele’s friends make for them. These posters really express the true soul of the Carnival in Venice. 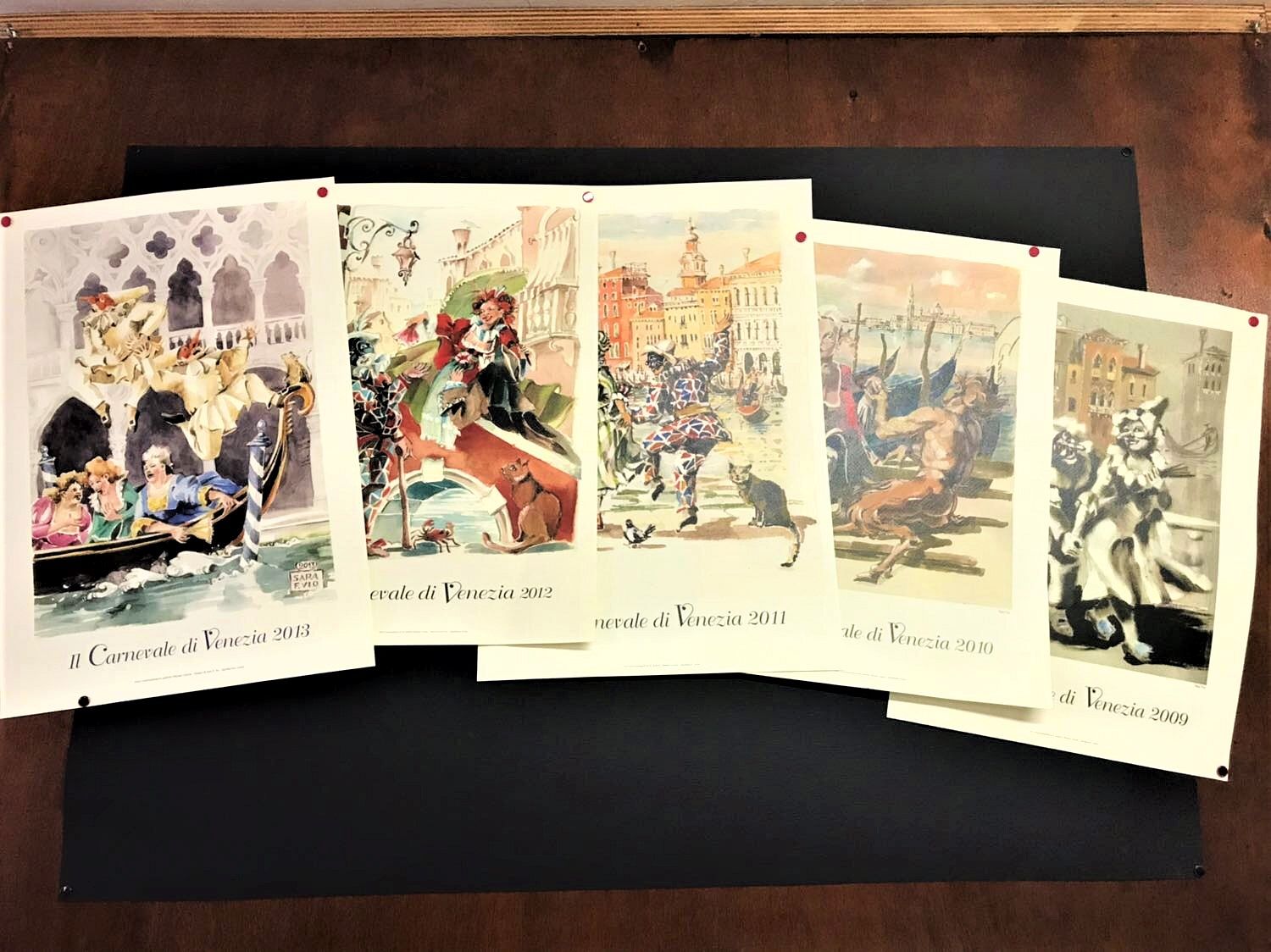 As we all know, time passes and tastes change, but sometimes to rediscover past traditions can become a new way to live our present days. This is the reason why Guided Tours in Venice (which is always the three of us of course, Marialaura, Monica and Cinzia) would like to suggest a private tour to find out how the unusual, hidden Venice, with its ancient as well as modern atmospheres, is still full of life.

Let us go back now to our initial question… how do they handle the high water (i.e. floods)? Luca and Michele spend hours, both during the day and at night, to pump out the water during floods. You can apply some barriers to the doors to prevent the water from coming in, but such barriers are never completely hermetic.
Isn’t it a proof of how attached Venetians are to their city, of how much they love it?
However difficult it might be to live here, they keep going, with great patience and determination.

So here we are, waiting for your Venice private tours with us: we are sure that to get in touch with the arts and crafts in Venice will allow you to bring back home authentic satisfaction, as well as small fragments of the real soul of this unique place.

Note: the author of the drawings is Sara F. Vio ©veneziastampa