A guided tour in Venice: the Pulcinellas at Ca’ Rezzonico

At the end of the Venetian Republic Giandomenico Tiepolo painted his answer.... During a private tour at Ca’ Rezzonico in Venice, we definitely suggest to spend some time in the Pulcinellas’ room, to admire the frescoes painted between 1793 and 1797 by Giandomenico Tiepolo for his family house in Zianigo, nearby Venice.
They can be considered a major masterpiece of this painter, who uses the Neapolitan mask of Pulcinella (or Punchinello) with the specific aim of representing the critical period, from a historical, economic, social and moral point of view, right before the fall of the Venetian Republic. 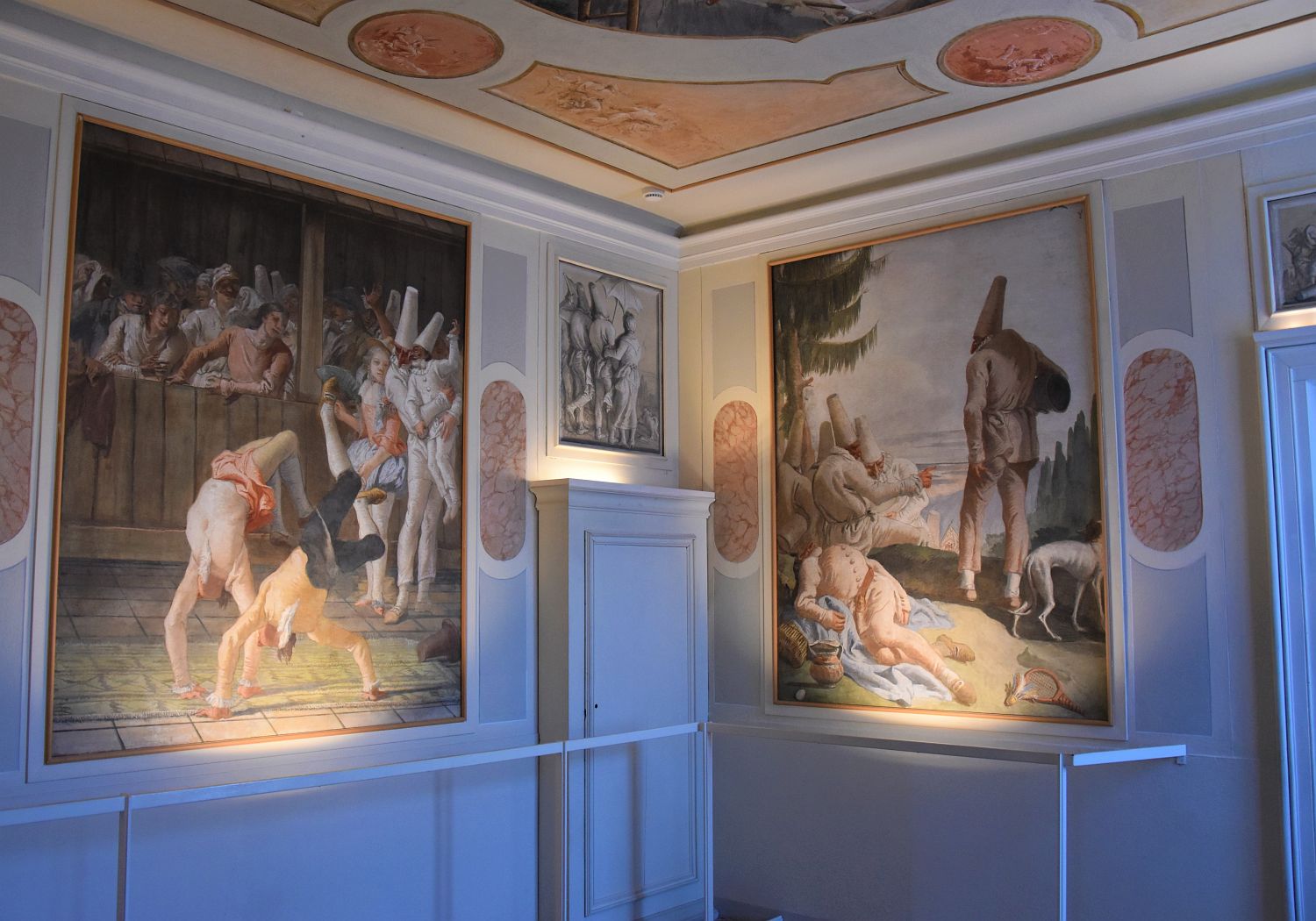 Pulcinella room
Pulcinella: The Mask
It might be interesting to remind about the origins of the name of this mask. Some critics think it might come from “piccolo pulcino” (i.e. little chick), whereas some others maintain that it has something to do with a peasant whose name was Puccio d’Aniello, who inspired Silvio Fiorello, an actor of the 1500’s, to create this original character.
Pulcinella is a sly and lazy servant. To make enough for a living, he works as a baker, a waiter, a peasant, even a thief, if this can be considered a job…
He is always in movement, he cannot stand still. He definitely cannot keep any secret. 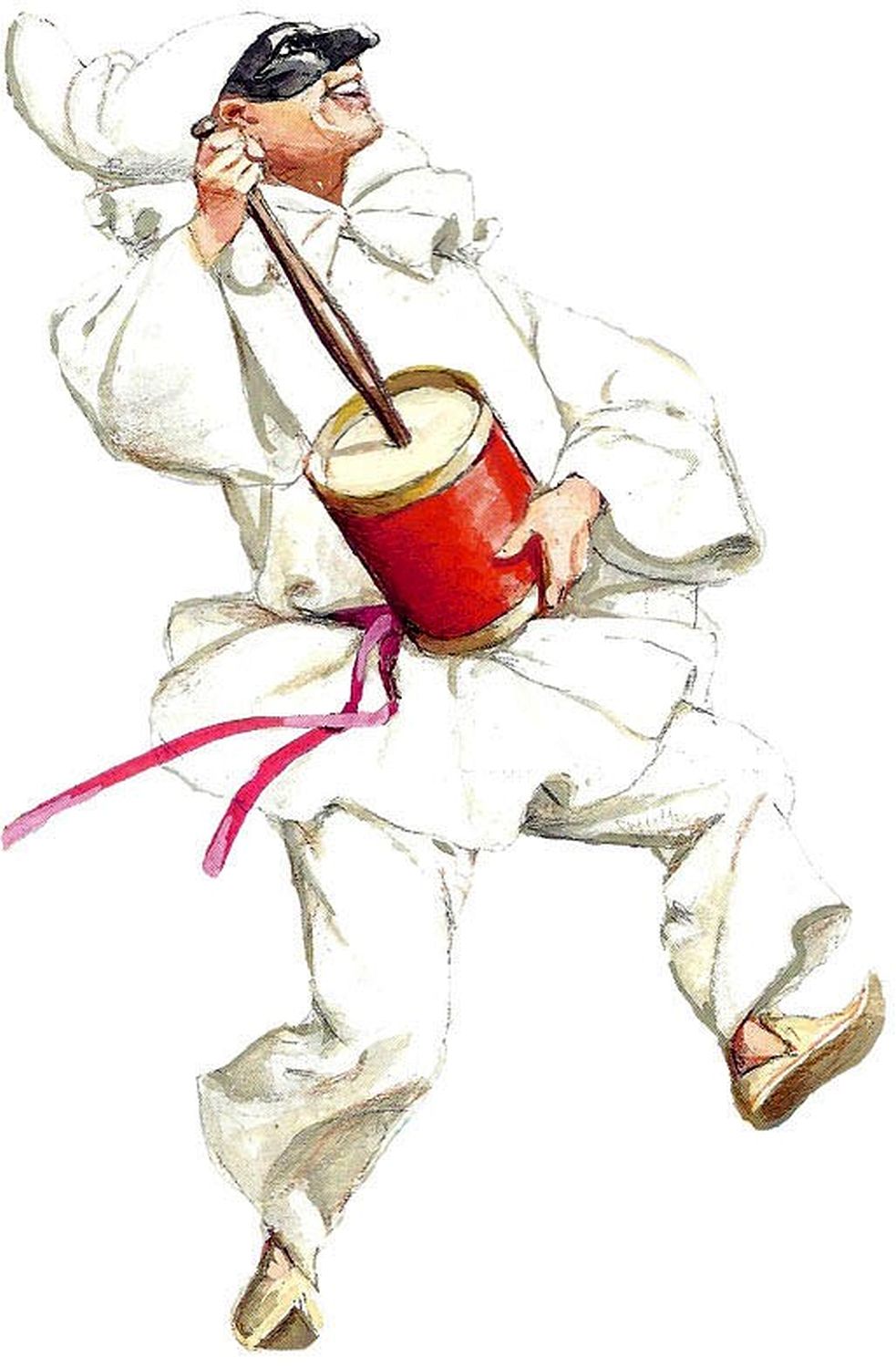 He frequently speaks loudly and vulgarly, he does not walk but jumps, his typical face expressions result in ugly but funny grimaces. Generally all the spectators like him.

Tiepolo’s Pulcinellas at Ca’ Rezzonico
In Pulcinella’s rooms we find ourselves surrounded by scenes of everyday’s life, both on the walls and on the ceilings. We can immediately feel some chromatic unity in all the frescoes: Tiepolo uses airy, delicate pastel colors, which contrast with the ugliness of the masks of the main characters.
The activities represented are exactly those that at the time were popular among the Venetian nobility, but this time they are performed by members of the lower classes.

We can admire, for example, “Pulcinella in love”, who, with no moral restraints, touches a lady’s breast… and the woman, being a Pulcinella herself, seems to be pleased. 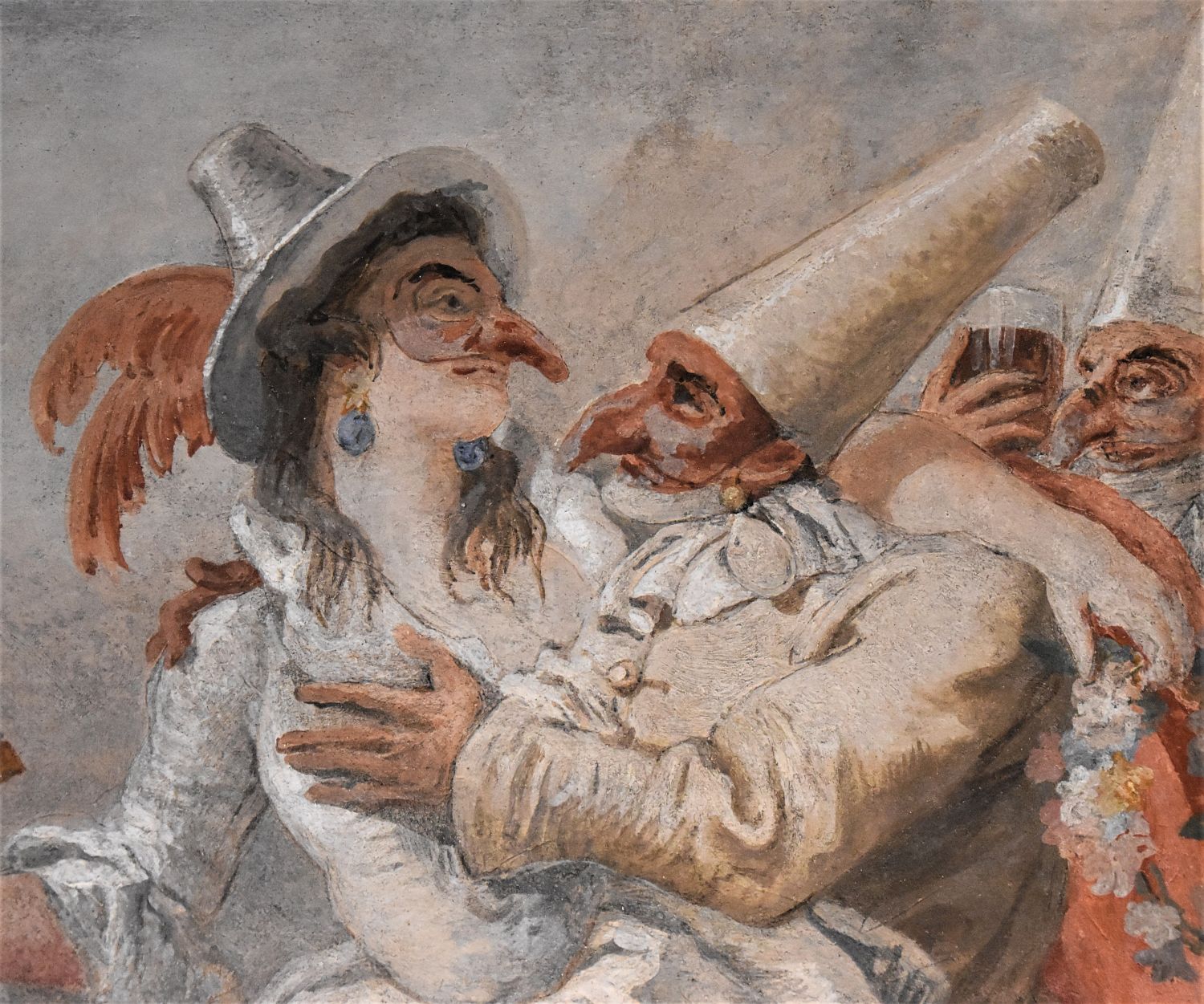 Behind these two characters, some others drink and have fun. All their gestures look quite natural, far from the hypocrisy that dominates the lives of the Venetian upper classes during the fall of the Republic.

Fun and joy come first: this is what another fresco seems to suggest, the one representing “Pulcinella and the acrobats”. 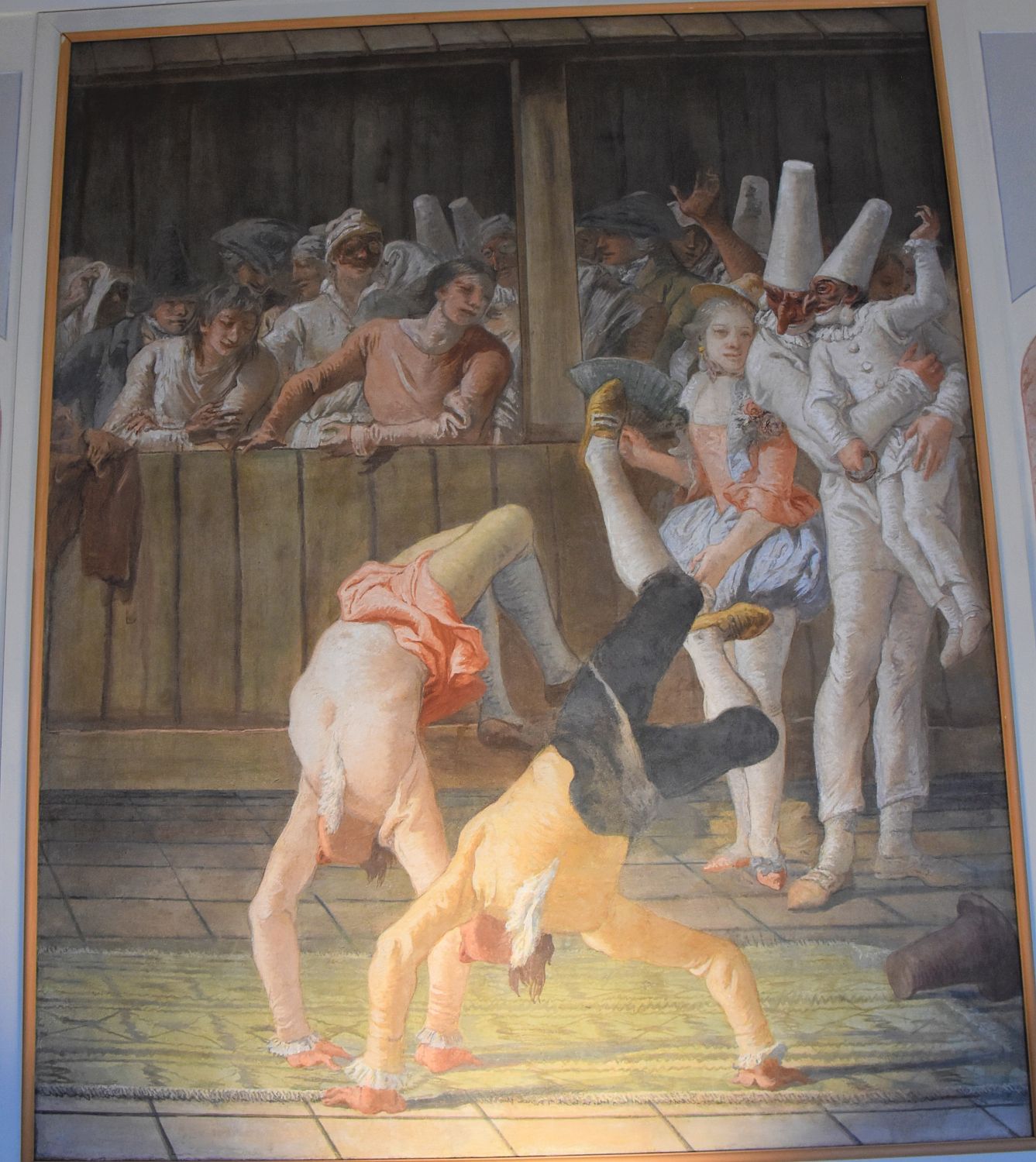 Pulcinella and the Acrobats

Two acrobats occupy the centre of the scene. Pulcinella the father holds in his arms Pulcinella the son, and the two of them enjoy the show together.
The chromatic mood here is slightly different: except for the two white figures, the dominating colors are shades of yellow and brown.

In “The Departure” we can admire quite a number of Pulcinellas: the one standing, with his back towards the viewer, leaves, holding a vase under his arm; some others, under the tree, chat and seem to point at something; the one on the foreground on the left, having already emptied a pitcher of wine, sleeps… in this fresco all of Pulcinella’s vulgarity is displayed, as in the scene where they play badminton, once again a reference to one of the nobles’ favorite hobbies. 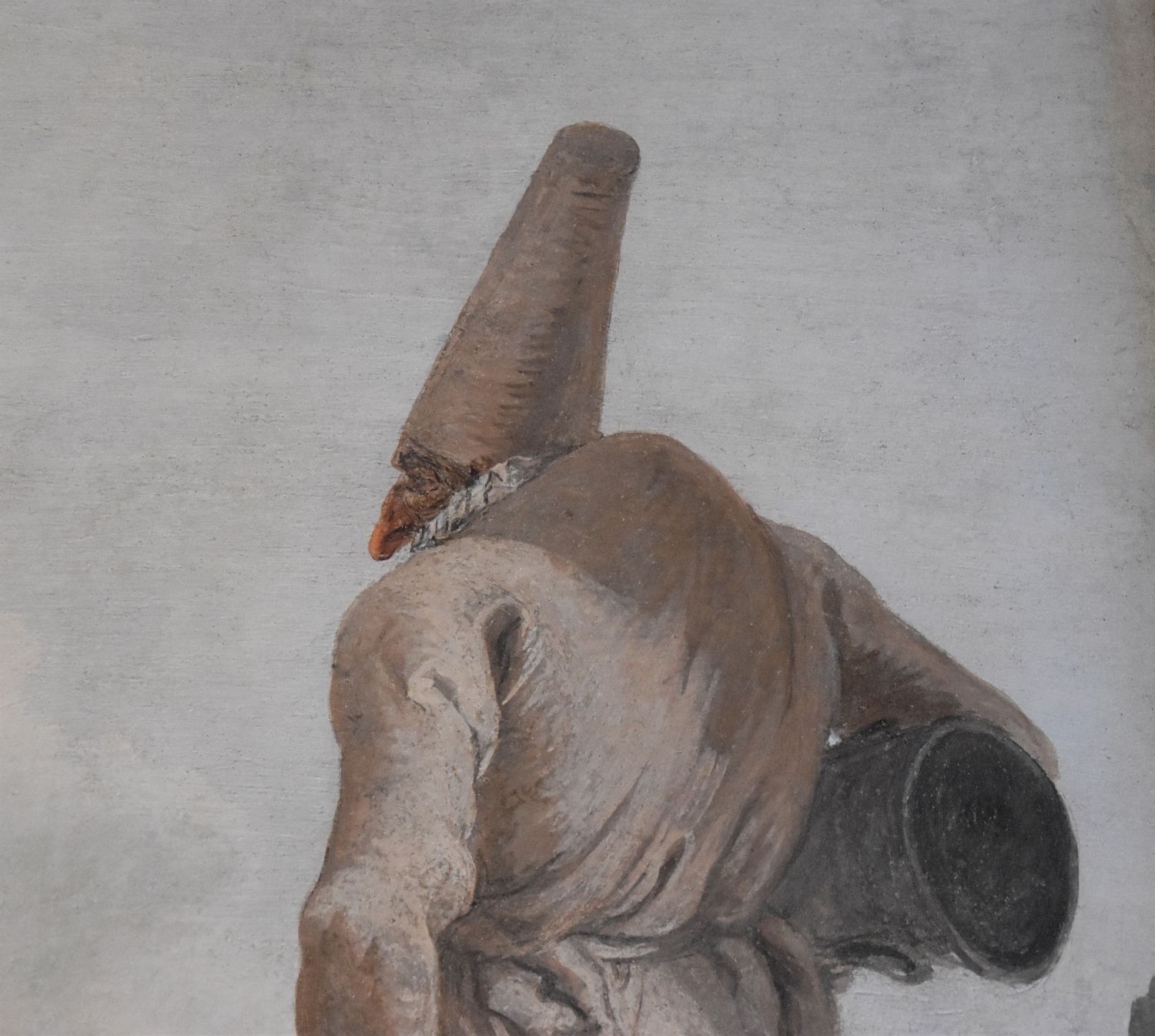 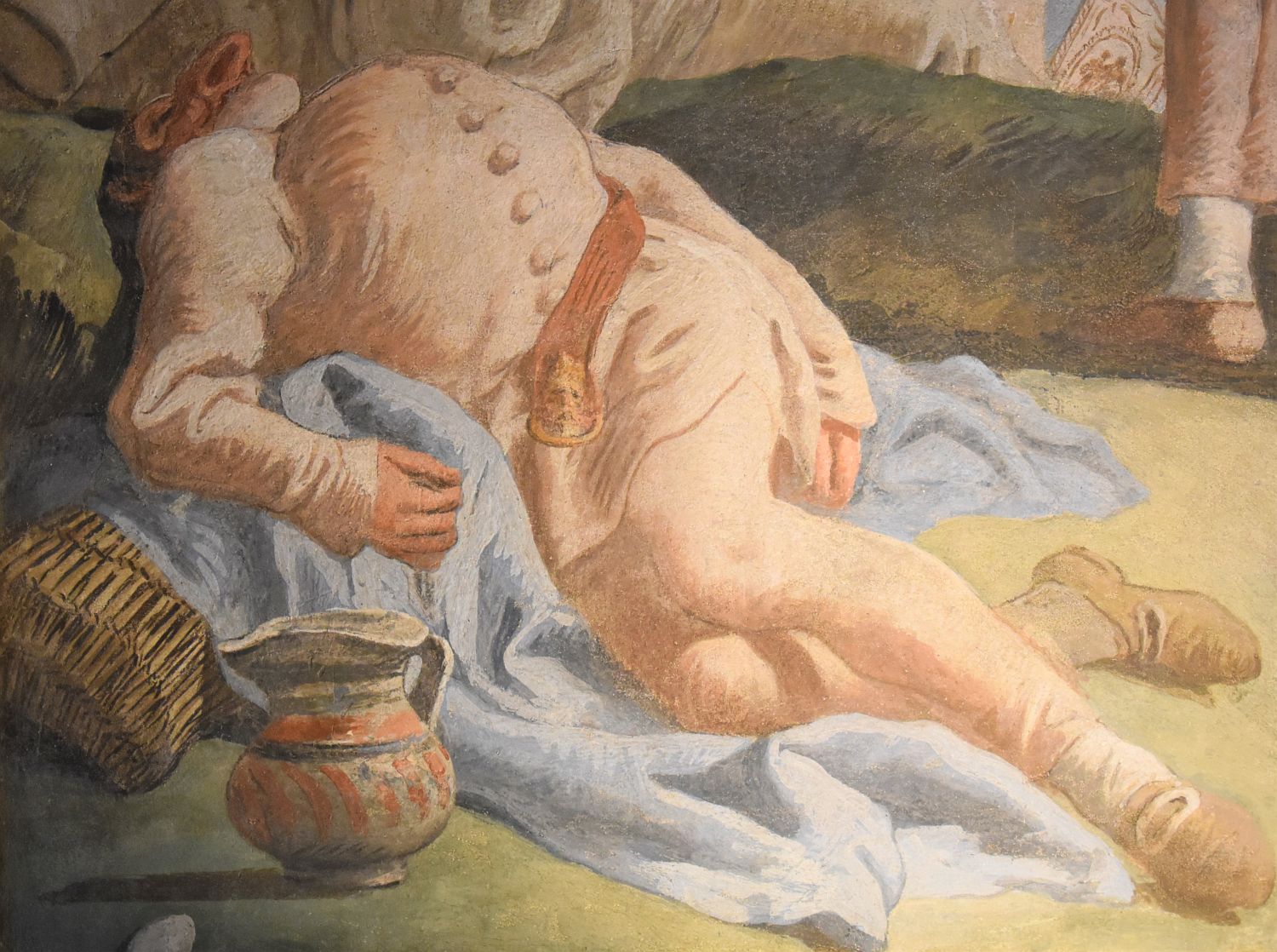 On the ceiling we can admire probably the most poetic scene in these room: “The Swing”.
Some Pulcinellas climb a wooden ladder up from under the earth, with the aim of enjoying the swing. Their poses and gestures, however, are not quite as elegant and refined as those of the aristocracy. 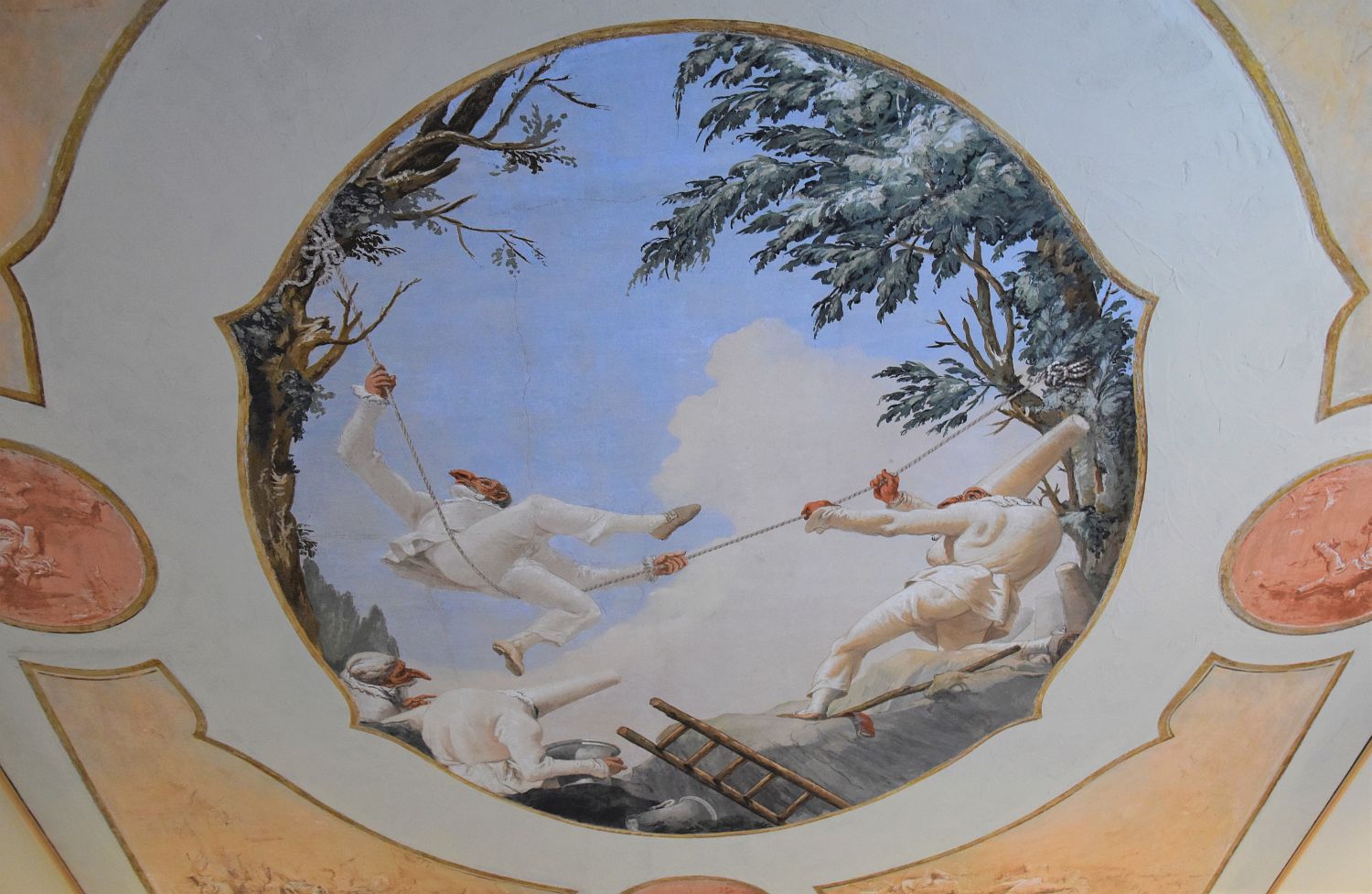 Giandomenico’s message
In these frescoes the master clearly criticizes the society he lives in: this is the way Giandomenico perceives the catastrophic historical situation present in Venice at the end of the 1700’s.
It is an apparently funny social satire against the members of the Venetian nobility, which does not accept its evident destiny of decay.
It is quite a prickly and severe satire, instead.
What are the nobles expecting? How do they imagine their lives after the imminent fall of the Republic? Why do they continue, ridiculously and anachronistically, to live as if nothing had changed?

Giandomenico seems to have found an answer to all the problems that afflict the Venetian society of his day: the answer is a world of Pulcinellas, where there are no social differences, where all people are the same and enjoy the same simple actions, without wasting time with false moralism.
The Pulcinellas wear a mask, but they are nonetheless genuine, sincere, instinctive, vital, clumsy and vulgar, all at the same time. There is no shame in their actions and attitudes.
The old aristocracy, instead, goes on with an absurd life, hiding behind masks of hypocrisy. 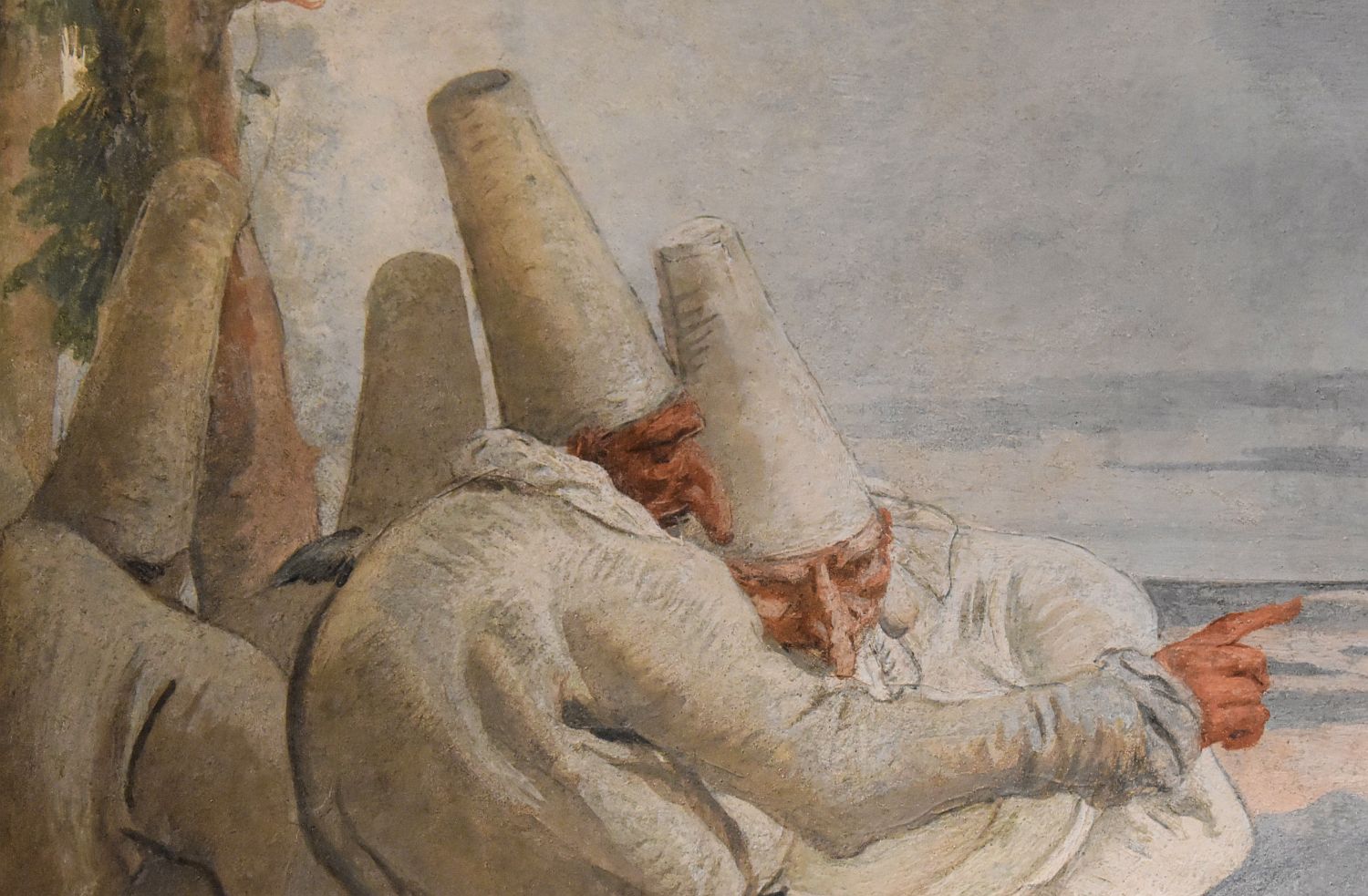