Art in Venice: Gualti and his Jewels

A unique Venetian artist We would like to introduce to you an exceptional artist, who has chosen Venice, or maybe has been chosen by Venice, to express all his creativity in unique works of art that are to wear as jewels.
During one of our guided tours in Venice we might pass in front of his atelier, and it is then worth it to stop for a minute to admire such great beauty.
Dear guests, here is Gualti.
http://www.gualti.it/
http://www.facebook.com/gualti.venezia 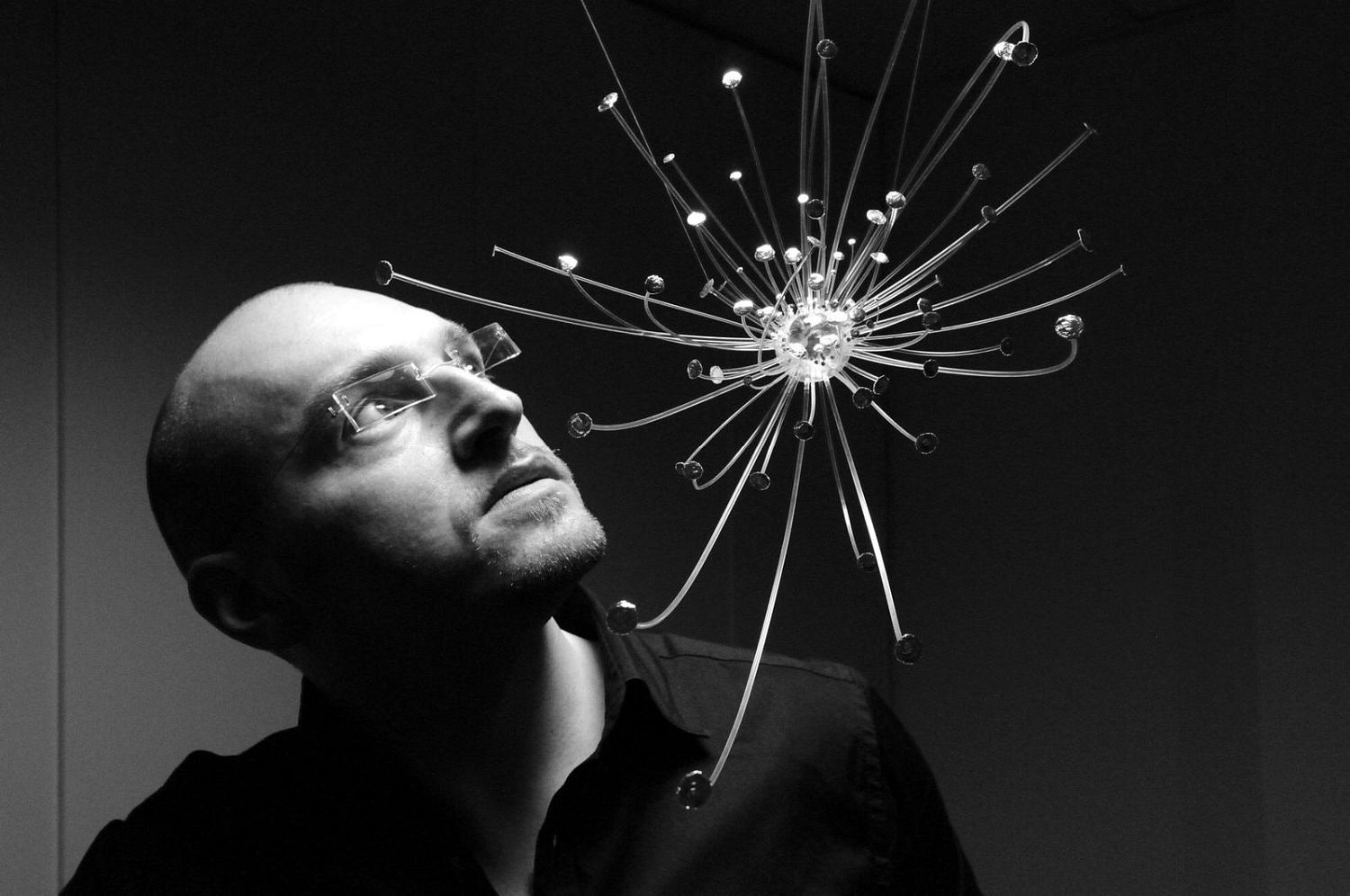 A tough childhood
Gualti was born in a little town not far from Padua and since his very early childhood he showed particular artistic abilities, as well as unique sensibility…even his kindergarten teacher noticed it. He liked sitting on the grownd, touching rocks, exploring the hidden essence of the plants by observing their roots.
He would frequently state that he would become an artist, although at that stage he was not fully aware of the grandeur of his dream.
His family acknowledged his potentiality, but they were not able to support this deep desire of his, so at the age of 13 Gualti was sent to work as an apprentice in a workshop of artistic ceramics. His desire for art was partially satisfied, but the environment was too suffocating for him, he felt as though he was living in a cage.
However, he soon found a way to express himself in another workshop, where he would go after work to create his own works of art, in particular jewels, using materials such as ceramic, wood metal…
At home he would use common objects, such as spoons and forks, and mold them into something totally different by curving, twisting and bending them: it was his way to give a form of eternity to the simplest objects of everyday life.
He would also spend time painting, taking photographs, listening to music…
He then started his endless search for new, original, unusual materials with which to create unique works: synthetic resins, nylon thread, aluminum fragments, glass spheres, glass and crystal beads, mixed or fused together; he experimented with them as if they were ingredients of new magic alchemies…

The redemption: Venice
After having spent 11 years in the ceramic workshop, and after one more demonstration of the narrow mindedness of his working environment, Gualti decided to quit that job. He was willing to accept nearly any job. By chance he read an advertisement about a company in Mestre, in the Venetian mainland, that was hiring artists. He called, but over the phone he was shy, he wanted to try to get the job but he was not sure if he could be good enough… The lady he talked to cut the conversation short and told him to go and meet her the next morning for a three day trial.
In Mestre he met Signora Marisa, a stubborn, almost masculine lady, endowed with uncommon sensibility. Marisa understood immediately that the young gentleman would be perfect for the job, but she also realized that Gualti had much greater potentialities. She then gave him a bus ticket to Venice and told him to find his future there.
Gualti had never been to Venice before… and he immediately fell in love with the city. He walked a lot, observed it in its details, got lost in the maze… at some point he stepped on top of Ponte dei Pugni (the Bridge of the Fists), in the Dorsoduro District, and he understood: that place was calling him! 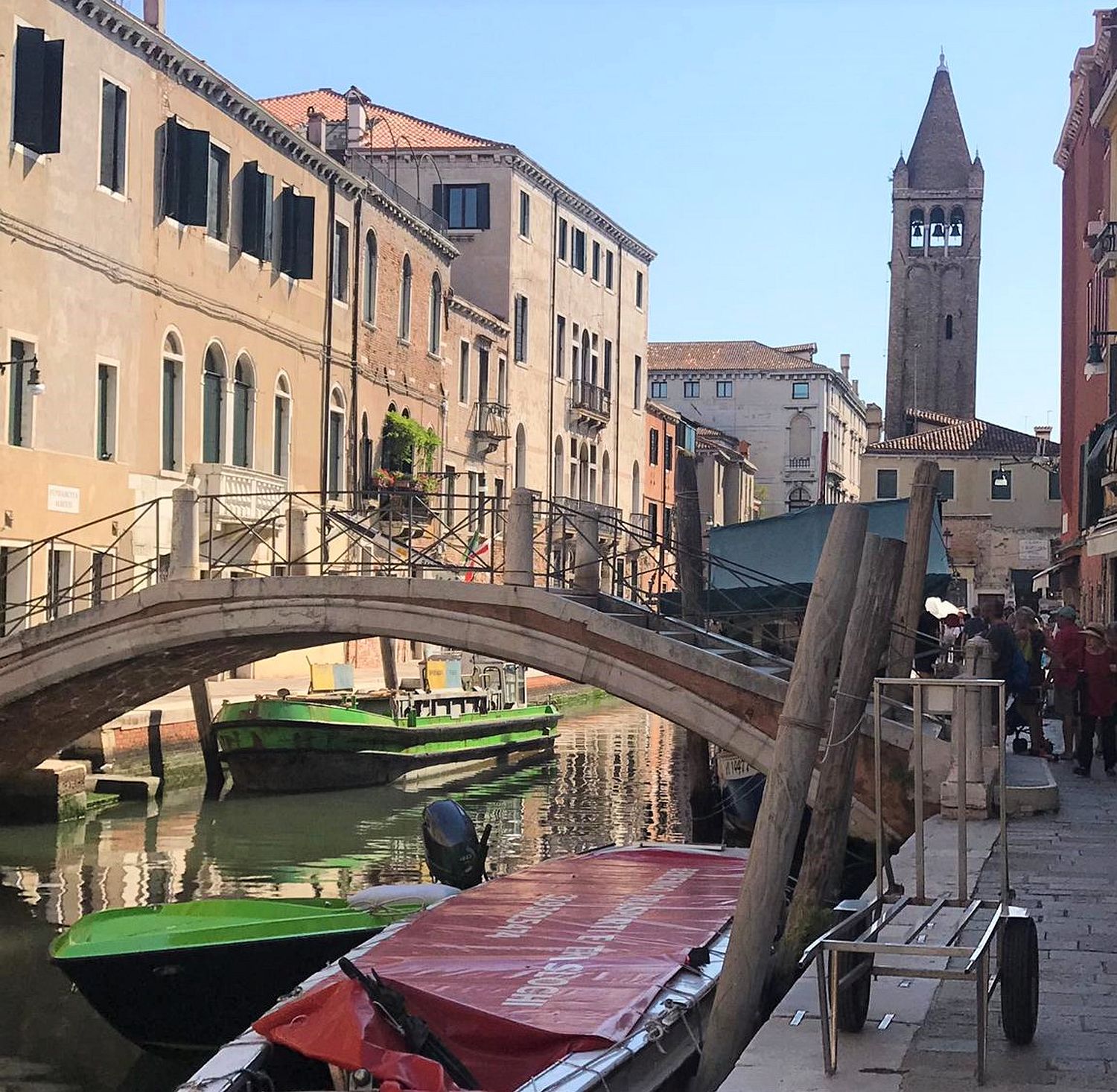 Signora Marisa had told him he would immediately recognize his magical place. So Gualti’s new adventure started from here. If guardian angels exist, the name of Gualti’s angel is Marisa for sure.

The new adventure: Gualti’s jewels in Venice
On September 13th, 1998, Gualti opened his first very small atelier, where he displayed his magical creations. It was a triumph! Venice and the Venetians met him with great enthusiasm. Indeed, the transparencies, the reflections, the colors of his jewels perfectly represent Venice, they seem to capture the essence of our magical city. Gualti’s tenacity won in the end. 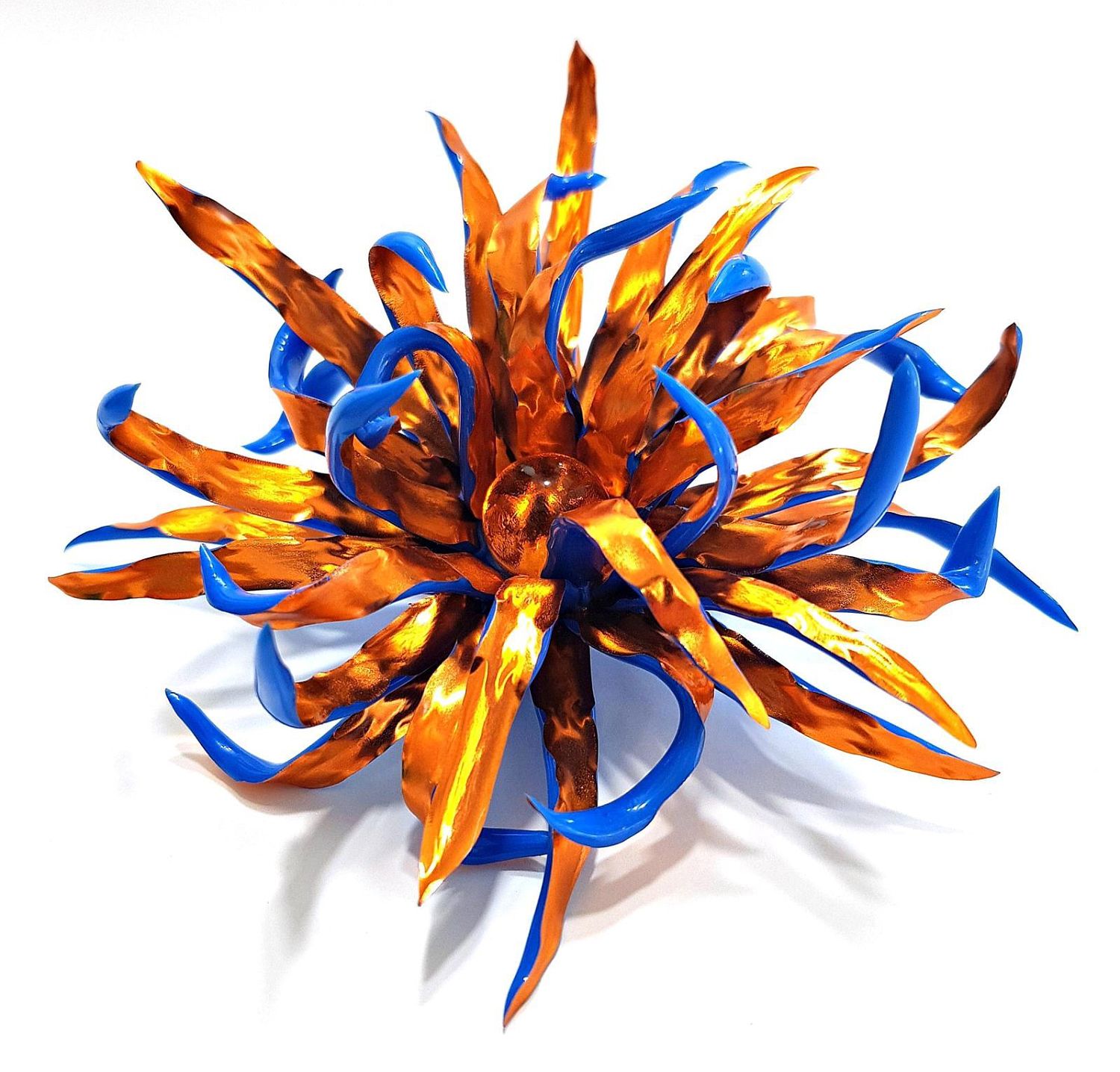 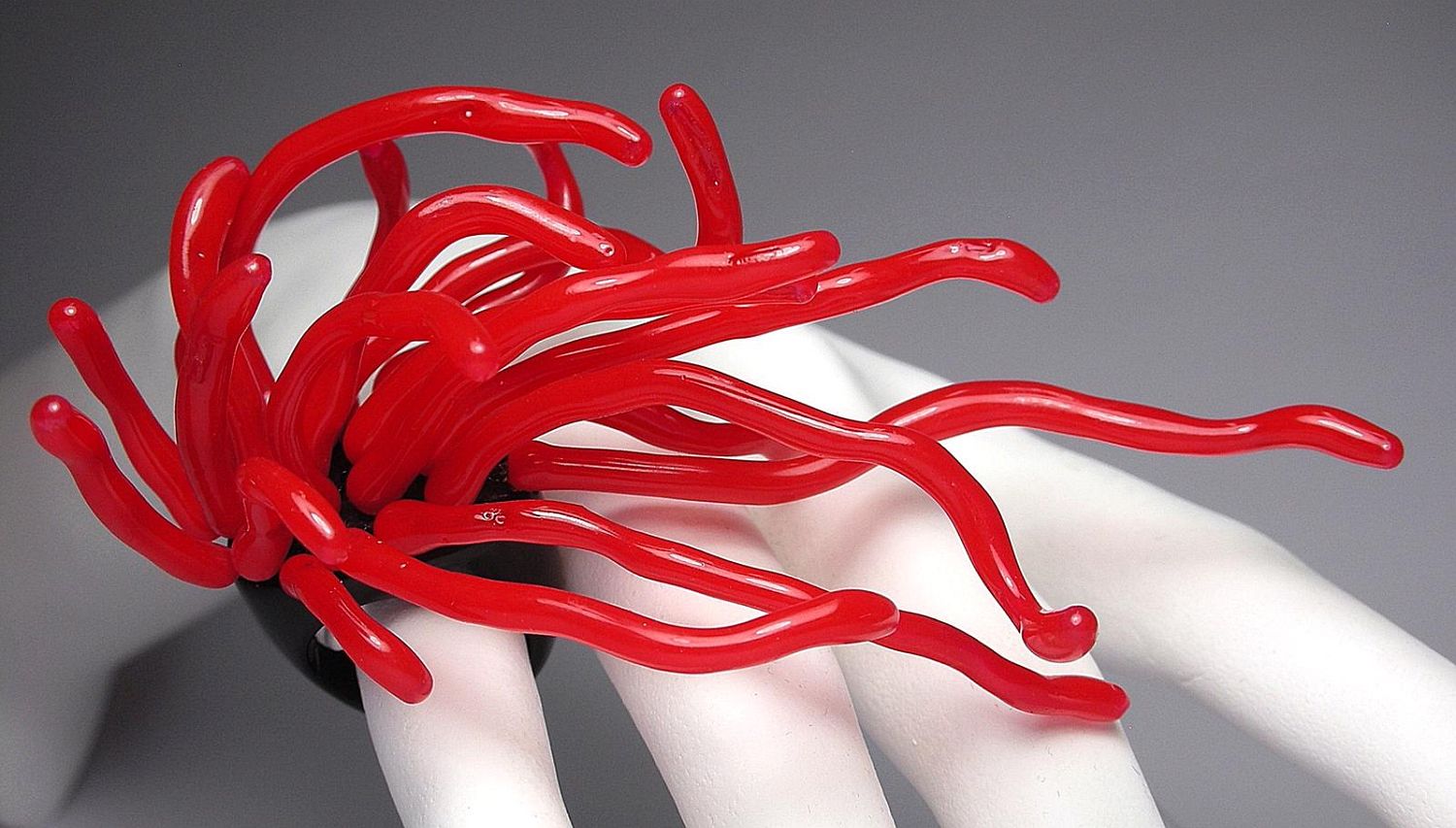 Alongside with the jewels, on the white walls of the atelier several scarves and wraps stand out: they look like sculptures, soft and stiff at the same time. The wavy ones remind of the water and of the seaweeds of the canals, of the Lagoon… a perfect match! 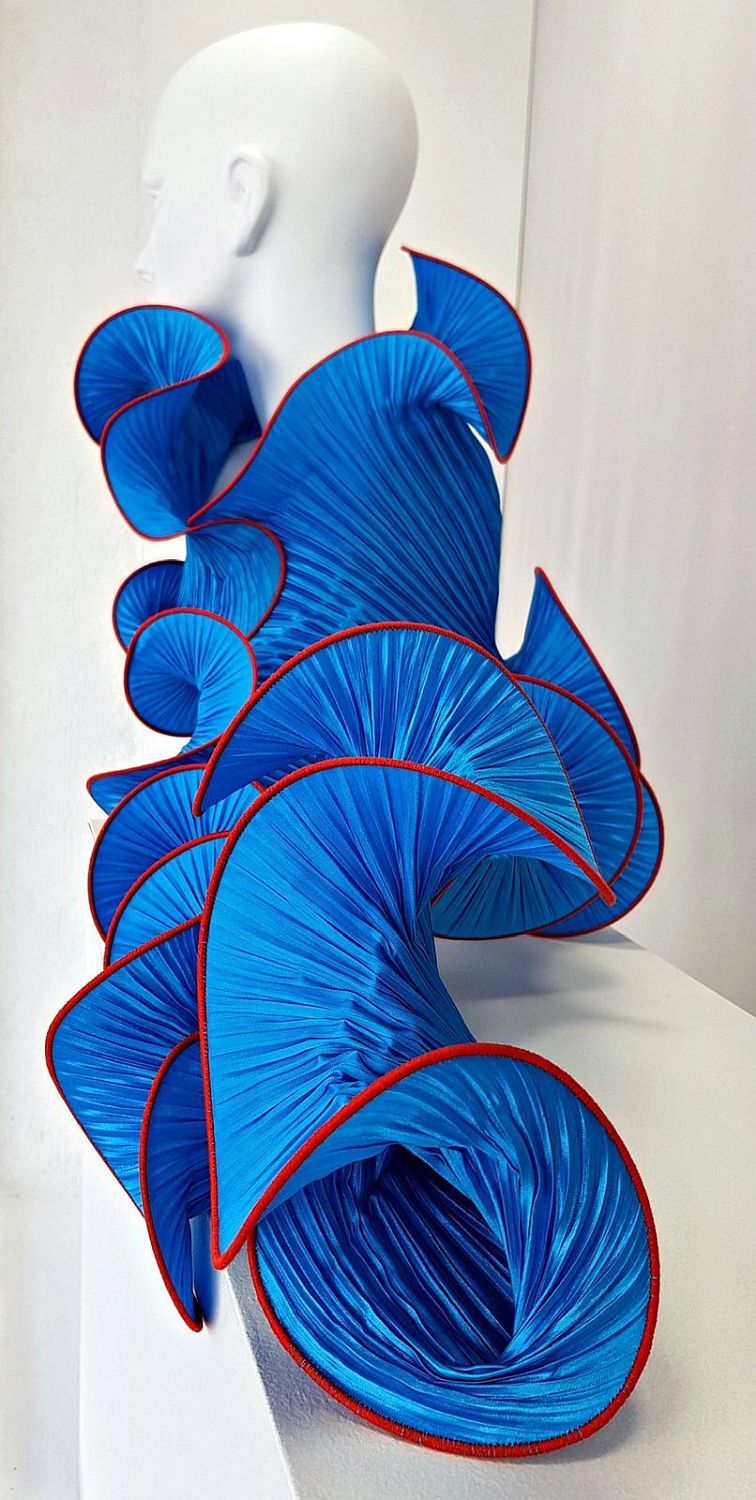 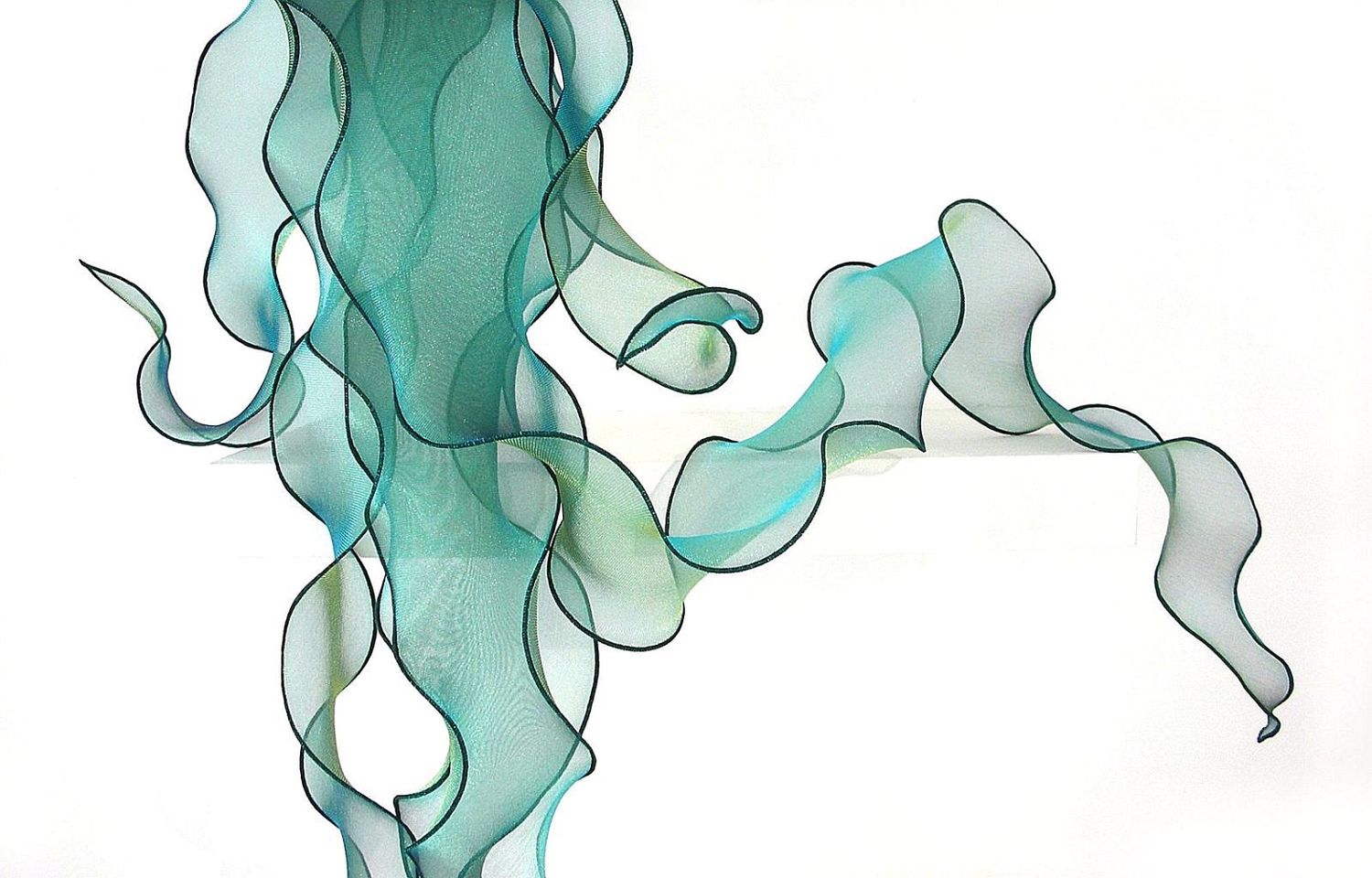 Gualti’s artistic jewels today
Those who enter his atelier find a man that frequently wears sober black clothes: he does not need to express his personality by wearing original outfits, since all his personality comes out of the jewels he creates.
Today you can find them in his new shop, on the other side of Ponte dei Pugni.
Someone said he is like an alchemist, who with secret potions and ingredients creates explosions of colors that materialize in his jewels. The real main character of his art is definitely color, and color is also one of the main peculiarities of Venice.
Gualti’s jewels are frequently inspired by flowers, seaweeds, beautiful elements of Nature…
We would like to end this post with some pictures of his creations, that are definitely more powerful than words.
If, like Dostoevskij wrote, “Beauty will save the world”, Gualti will sure occupy a little great place in the process.
We are looking forward to taking you on one of our guided tours in Venice: it will be an honor for us to show you this enchanting, real Venice, full of beauty and also of marvelous people and unique artists.
info@guidedtoursinvenice.com 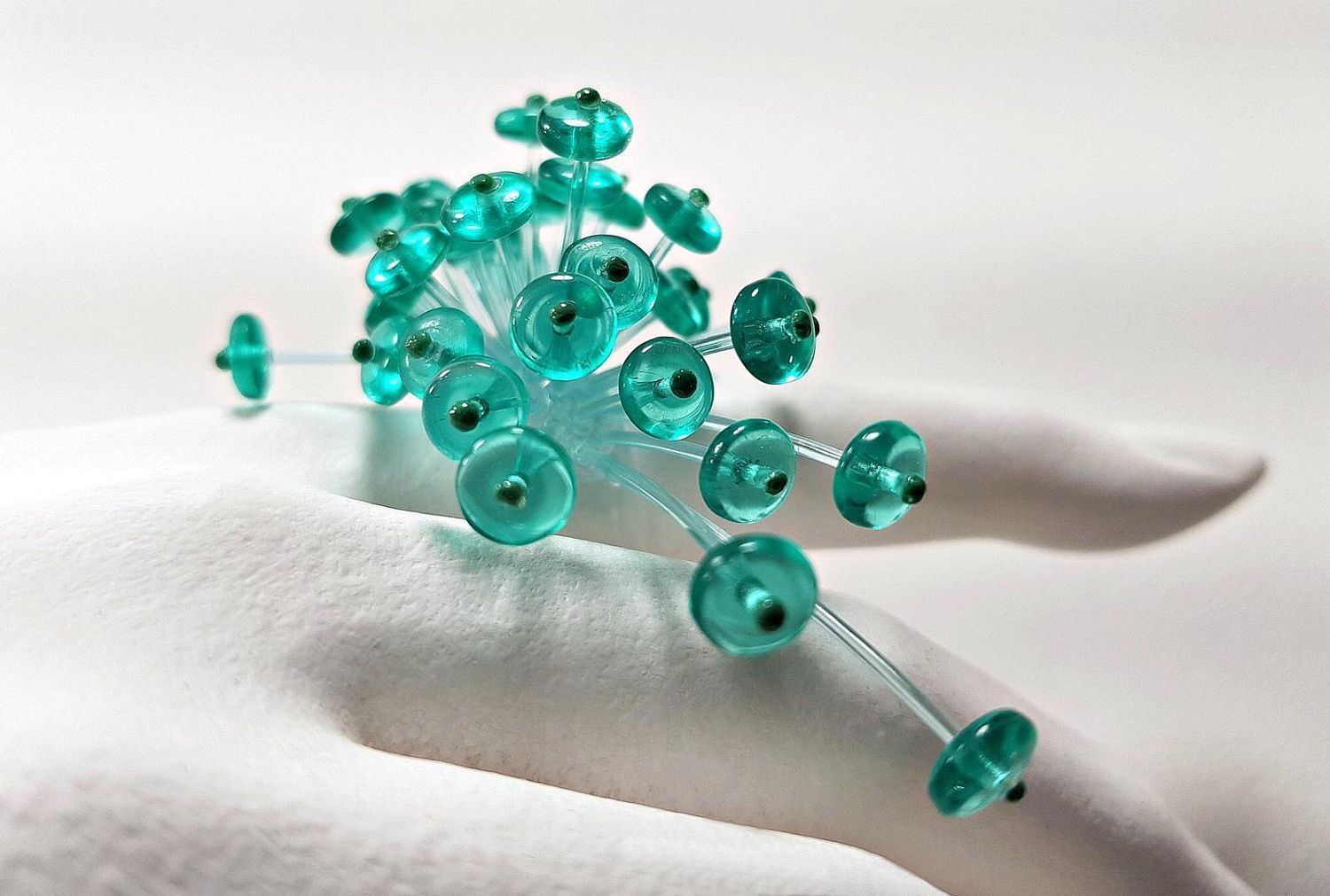 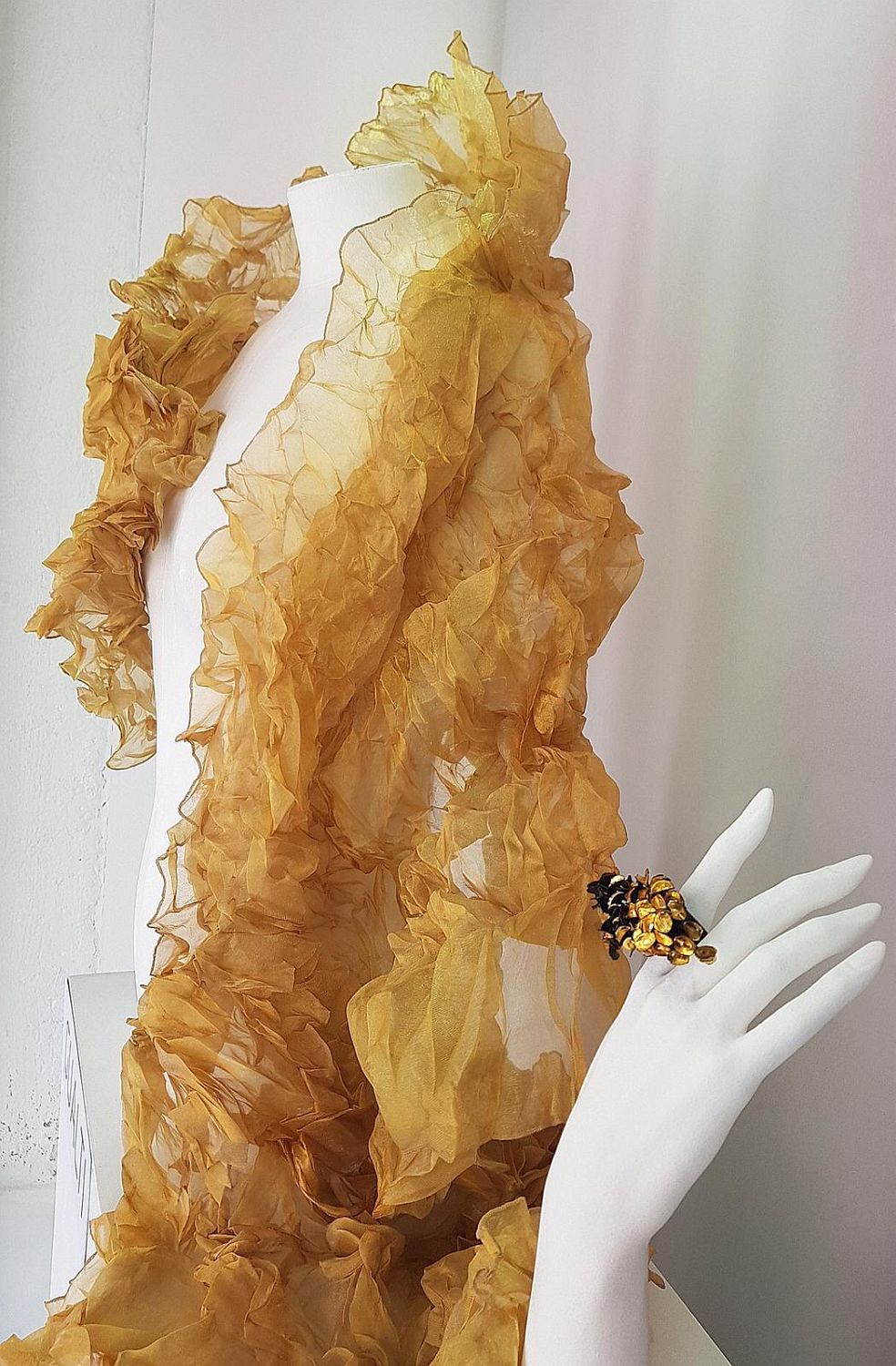 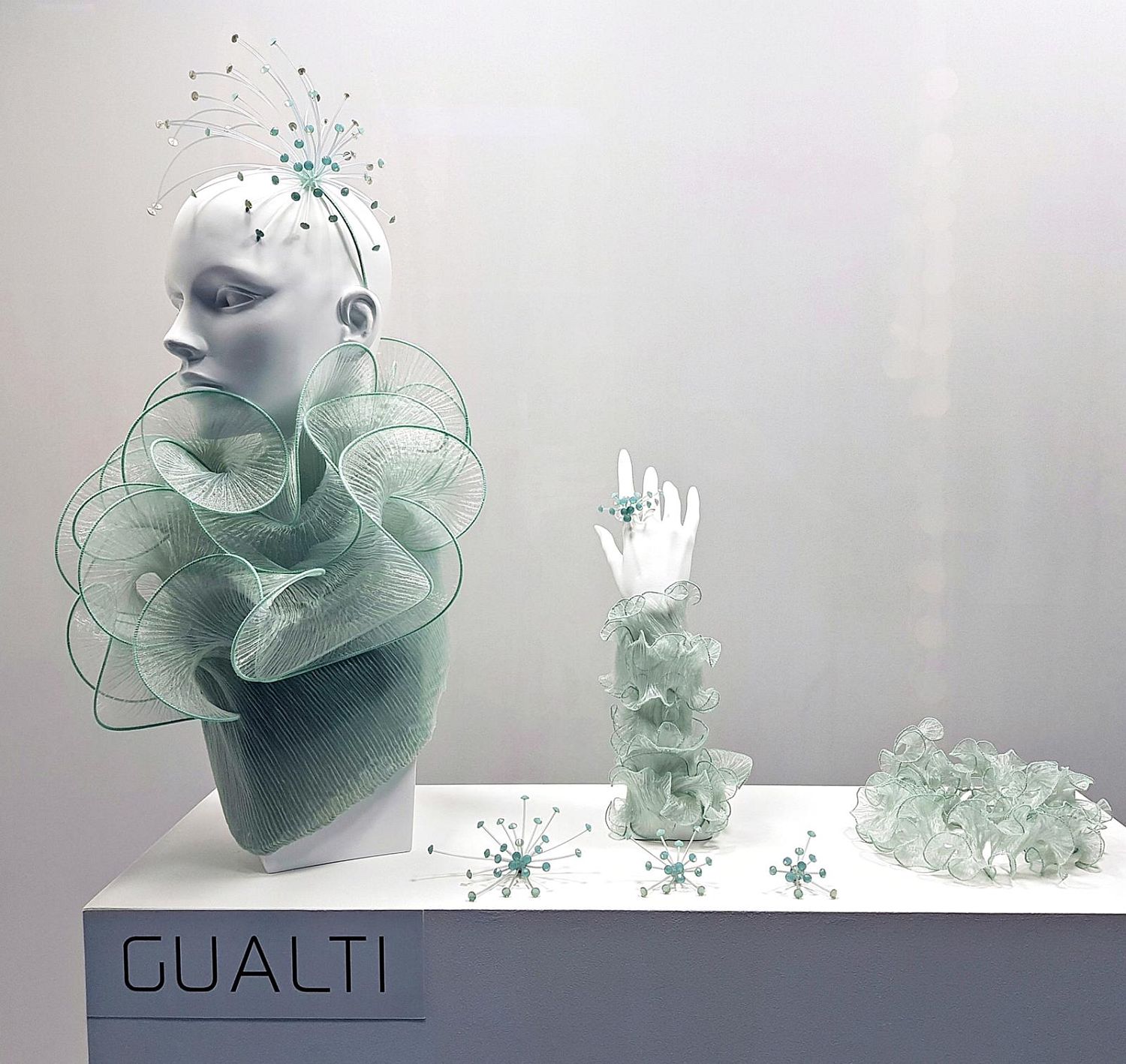 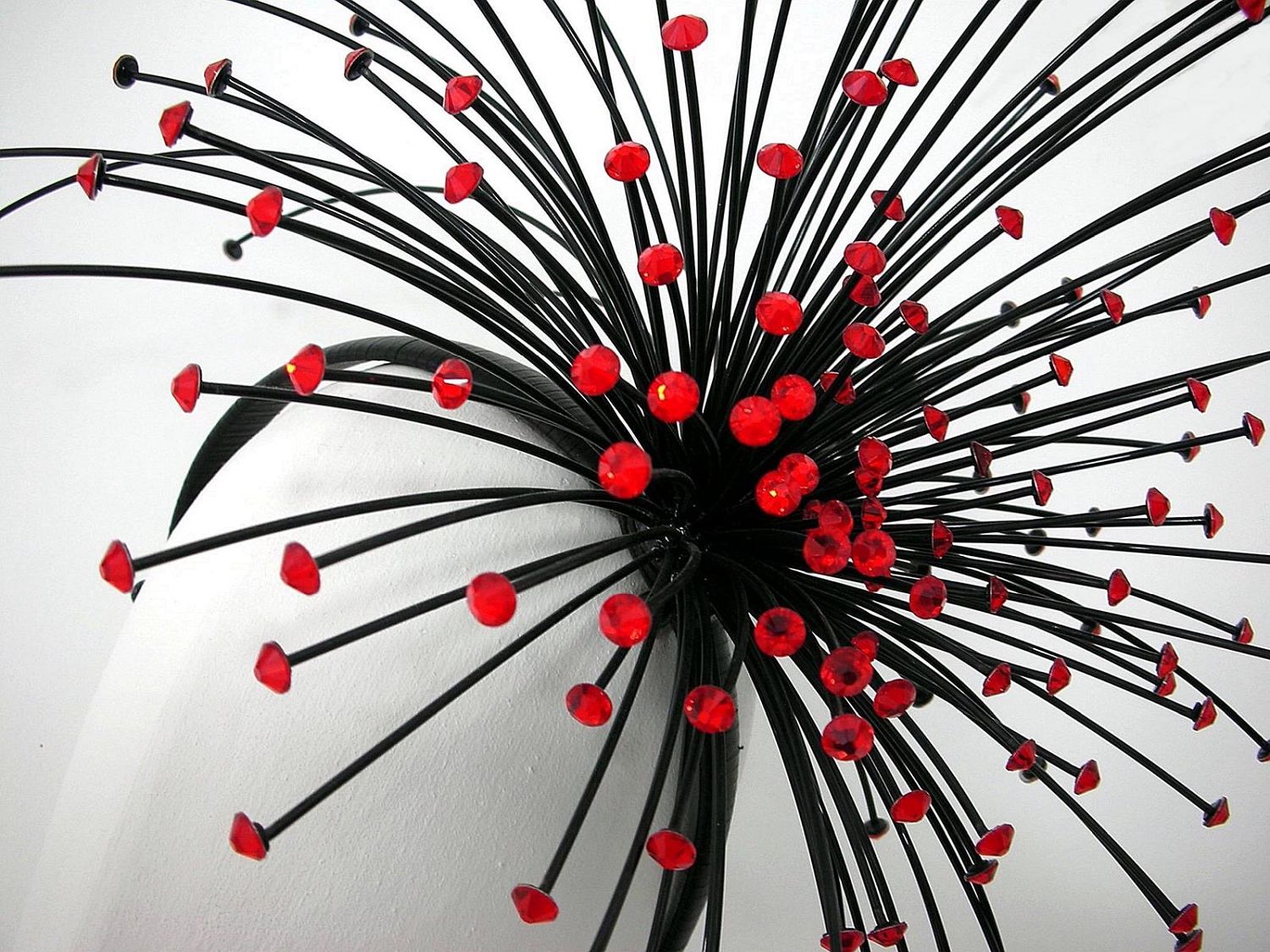