Biennale in Venice: Oddnesses along the Grand Canal

Discovering original sculptures along the Grand Canal during the Biennale

What does an angry gorilla do at the window of one of the luxury hotels along the Grand Canal? And what about those gigantic hands coming out of the water? And what is that thing shining over there, in the middle of a campo facing the Grand Canal?
These are some of the works of art installed on the banks of the Grand Canal for the 57th Biennale.

It is completely free of charge to admire them, from a vaporetto, from the Accademia Bridge, from the magnificent terrace on top of the German’s warehouse (Fontego dei Tedeschi), from the short banks that here and there appear along the Canal.
You can have a private guided tour of Venice simply using the public transportation, strolling around or getting lost in Venice.

The Biennale frequently offers everyone the possibility of enjoying the vision of majestic works of art without having necessarily to buy a ticket. 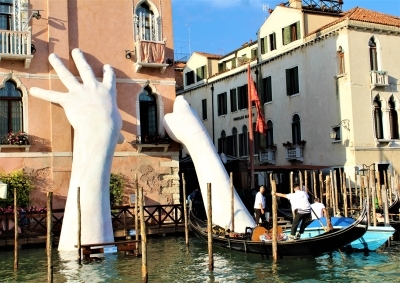 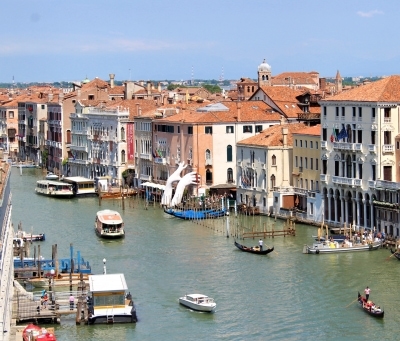 We have already written quite a lot about Lorenzo Quinn’s huge hands. His work of art, Support, has become quite a renowned case worldwide, having been shot thousands of times and having been one of the most admired installations of the Biennale (‘Lorenzo Quinn’s Hands in Venice: a perfect combination between tradition and modernity’). For example, if you digit “works of art along the Grand Canal” on Google, these incredible hands occupy almost entirely the first two pages! And it is quite understandable: no matter from which point of view you take a look at them, these white gigantic hands are really astonishing. Are they holding up Ca’ Sagredo, the hotel to which they are applied? Or are they suggesting that what we need to support is Venice and its invaluable artistic heritage? Or maybe they are meant to support, poetically, all our desires and dreams? These questions are open to a number of different interpretations and answers.

Following the course of the Canal, we find one other monumental sculpture right in front of Palazzo Grassi. It is impossible not to notice it: it is a eight-meter bronze statue that represents a monster, similar to a dragon, wrapped around a knight and his horse. The Fate of a Banished Man by Damien Hirst is enthroned on top of a high base of Istria stone, next to the water door of the palazzo… a “little” appetizer of the exhibit Treasures from the Wreck of the Unbelievable, which starts here and finishes at Punta della Dogana, the former Customs Office. Is this work of art to be considered as a modern version of the Loch Ness monster, or maybe as St. George defeated by the dragon? Or is it some sort of a contemporary Laocoon killed by the serpents? All the different interpretations of Hirst’s artworks are admitted, in particular in the case of the present exhibit (for more details to previous our posts: ‘Hide and seek with Damien Hirst in Venice ‘ and ‘More hide and seek with Damien Hirst in Venice’) 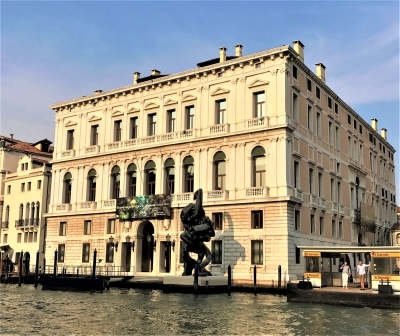 The fate of abanishedman,DamienHirst, Palazzo Grassi 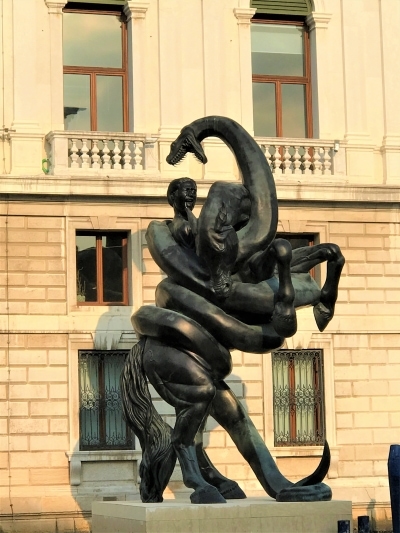 This sculpture is incredibly large, full of multiple readings and cultural references. Hirst really plays with Art History and its different artistic periods, mixing the bizarre forms of the horse, that seems to have been taken out of the Japanese manga, with the sea monsters of the fairy tales, twinkling an eye to ancient sculpture an at the same time to the hyper modernism of the knight, who does not appear ancient at all. 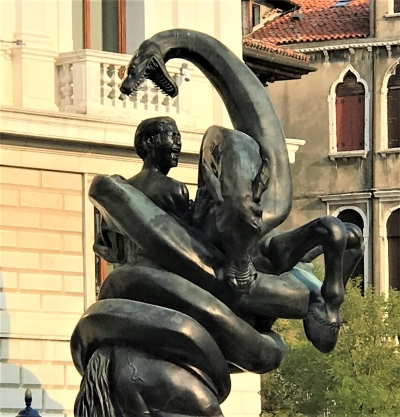 The Fate of a Banished Man, by Damien Hirst, detail

Right after the Accademia Bridge another spectacular installation appears in the garden of Palazzo Franchetti, inserted in the beautiful exhibit Glasstress, organized by the Berengo Foundation, which over the past ten years has shown the best among the glassworks by international artists. We are talking aboutProtected Paradise, by the Belgian artist Koen Vanmechelen, who deals here with themes such as recycling and sustainability. 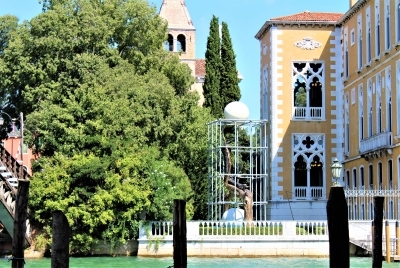 The 12-meter high imposing work of art consists of two bronze trees inserted into a glass lawn, where you can see a gigantic hen’s leg with a huge egg, both imprisoned in a cage, produced by Eco-oh! with recycled materials; one more egg is placed on top of the cage. This artist has been frequently working with eggs and hens. With this work of art Vanmechelen suggests that we all should think about the destiny of the world, where human fragility is tested by Nature. Nature itself is always free, not imprisoned in a cage of recycled materials, and it eventually prevails. This is, in the artist’s intentions, a metaphor for the hysteria of the contemporary world, where paradise is like life: fascinating and terrible. 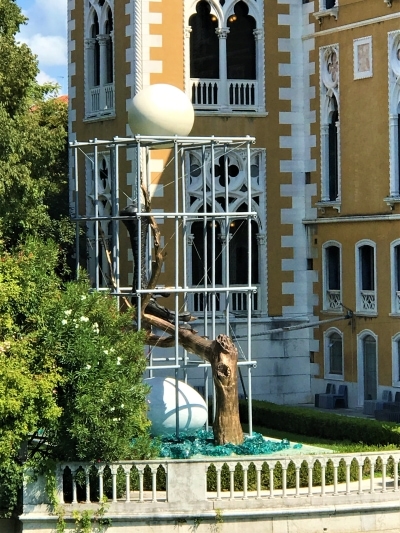 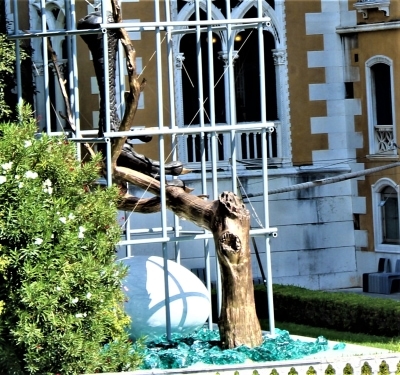 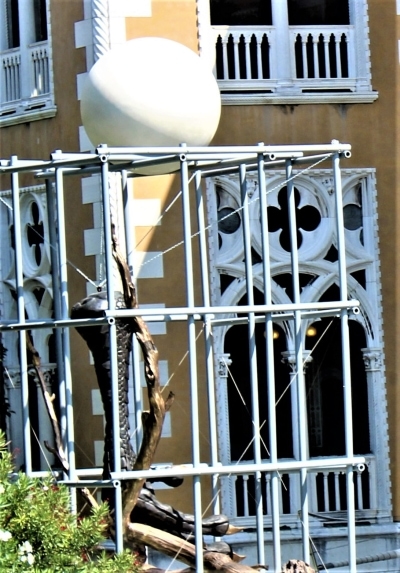 A little further down the Grand Canal the Golden Tower by James Lee Byars stands: it is 20 meters high, covered with 35,500 pieces of 24-carat gold leaf, which make it glow like a lighthouse in the darkness. The artist had a great desire: to see his golden tower placed in an external public area. His desire has now been fulfilled in a magnificent way: his work of art has been installed in a charming campo along the Grand Canal, in the beloved golden city where Lee Byars lived for a while. The artist loved gold, which he used both in his works of art and in his performances. The splendor of gold is a symbol of the sun, of light, of self consciousness and of the divine. Here in Venice the tower possibly symbolizes the union between the East and the West, between the human and the divine. 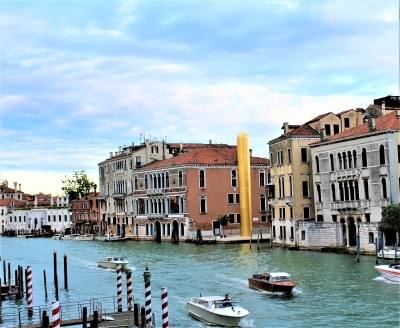 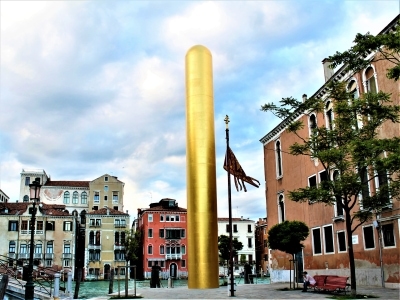 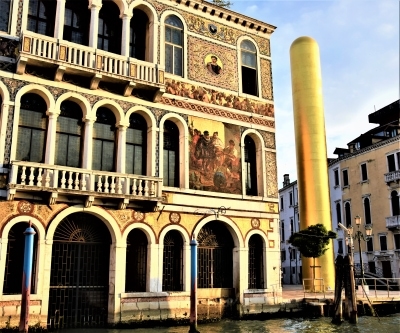 As we proceed down the Grand Canal towards St. Mark’s we meet some bizarre figures at the windows of the Centurion Palace Hotel. 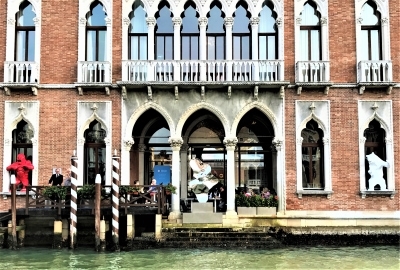 The steel sculpture Light of the Lagoon, by the Albanian artist Helidon Xhixha together with Wild Kong, a red aggressive orangutan, and Wild Bear, the white bear next to it, by the French artist Richard Orlinski, who is quite famous for his sculptures of wild animals. 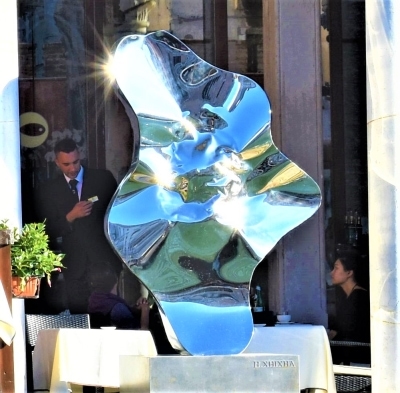 Light of the Lagoon, by Helidon Xhixha 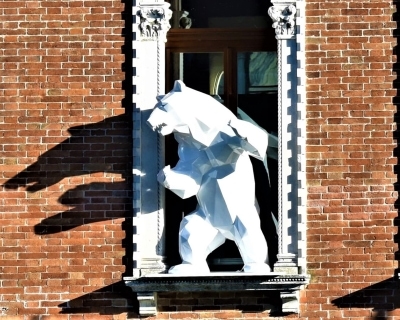 At the end of the Grand Canal, by Punta della Dogana, we find two more sculptures by Damien Hirst. Carved out of a piece of Carrara marble, so perfect that is almost seems like plastic, one more version of The Fate of a Banished Man stands at the entrance of the exhibit area. The horse and the knight are again wrapped around by the monster. This time the horse is quite calm, whereas the knight appears literally terrified as he helplessly tries to escape from the monster. 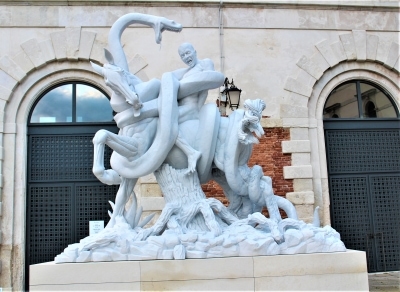 The Fate of a Banished Man, by Damien Hirst, Punta della Dogana

Facing St. Mark’s area we then find the bronze Blu Mermaid, who comes out of some sort of Rococo waves, quite similar to flames. She seems to be looking at the sea, from where she has probably come, before she ended up stuck on the wall of the Dogana, as if it was the bow of her imaginary ship. 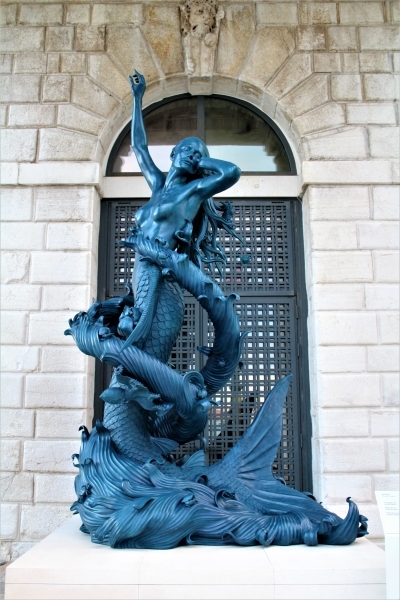 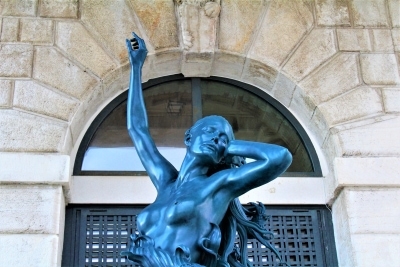