Burano Lace: Stories and Legends of the Venetian Lagoon

Are you ready for an adventure?

Welcome back! In our previous post on Burano (link: Customized tour of Burano island a little jewel in the Venetian lagoon) we mentioned the lace, for which this island is quite well known all over the world. We would like now to take you back to Burano, as to tell you the story, in between reality and myth, of this extraordinary handcraft.

There exist several legends and tales about it, and some of them are quite ancient.

One of the most famous legends is quite romantic. One day a young fisherman, who was engaged to a beautiful girl of the island, went out to the open sea to fish. He was suddenly surrounded by enchanting mermaids, who tried to seduce him with their melodious voices. 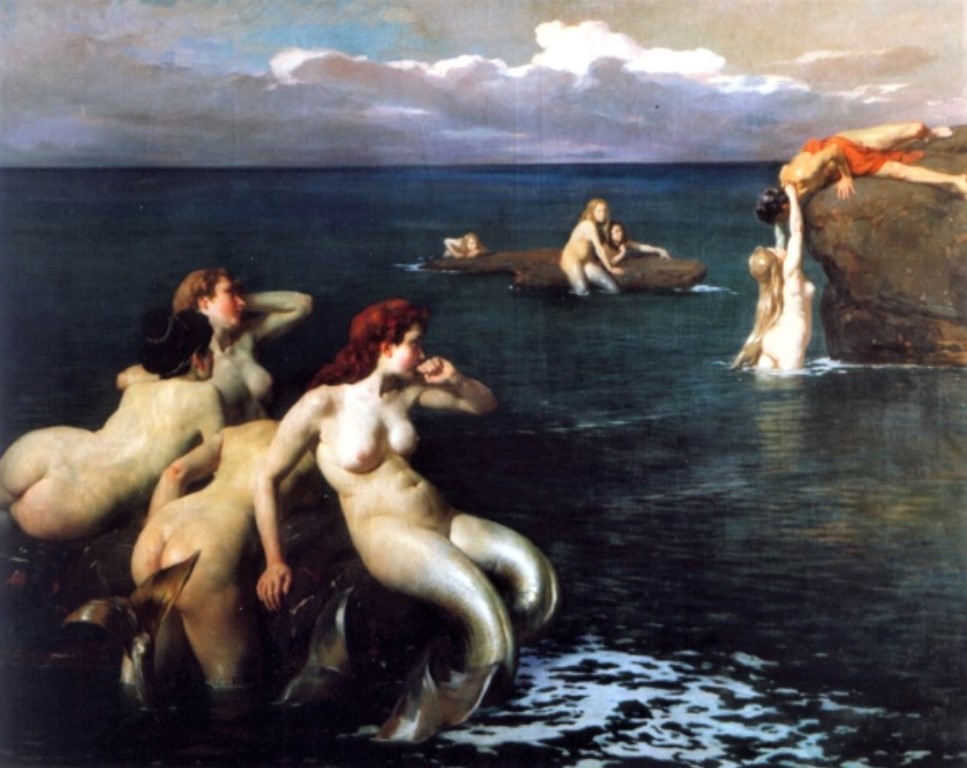 The young fisherman tempted by the mermaids.

The young man, however, resisted the temptation, thanks to the true love he felt for his fiancé. The Queen of the Mermaids, impressed with this incredible love shown by the fisherman, donated him a bride veil made out of sea foam. 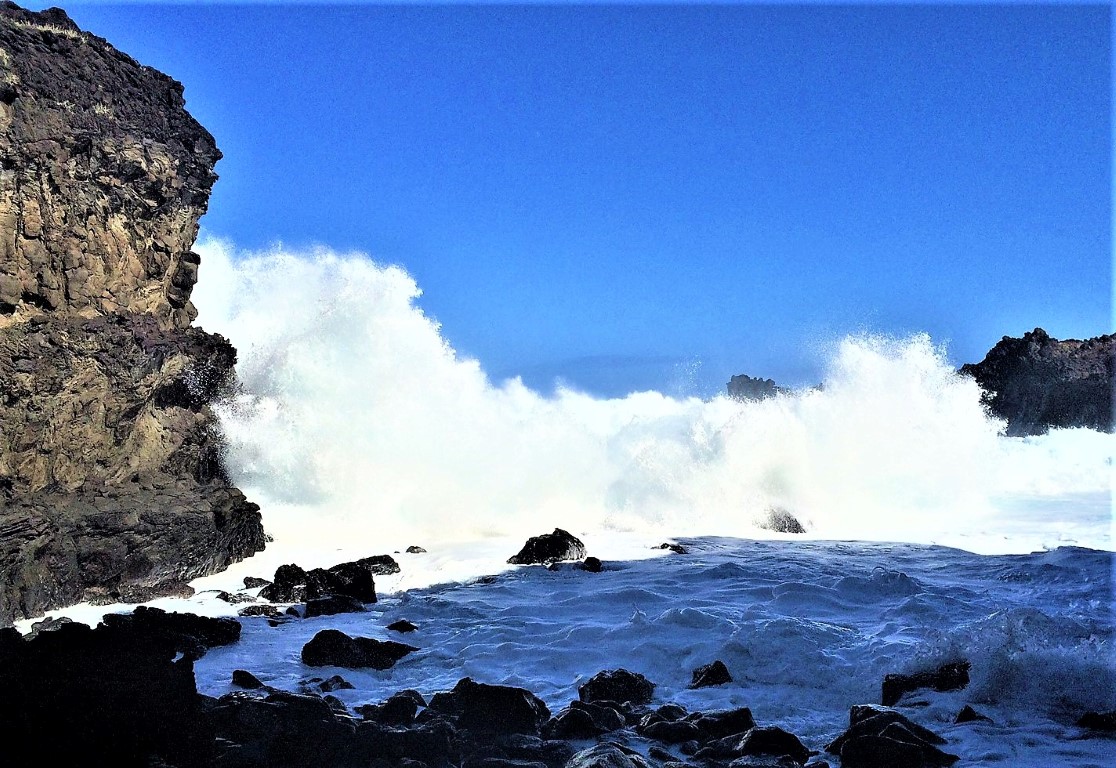 Once the young lady's friends saw the veil, burning with envy, they decided to try to reproduce it with needles and threads. And this should be the reason why thelace tradition was born on Burano.

Another legend concerning the origin of the lace springs out from a different love story, which involves once again a young fisherman and a beautiful girl from Burano. The young man had to go to war, but before leaving he gave his girlfriend a marvelous, unique sea flower as a gift. With this beautiful flower impressed in her mind, the young lady, waiting for the return of her beloved young fisherman, started to weave a fishing net for him. 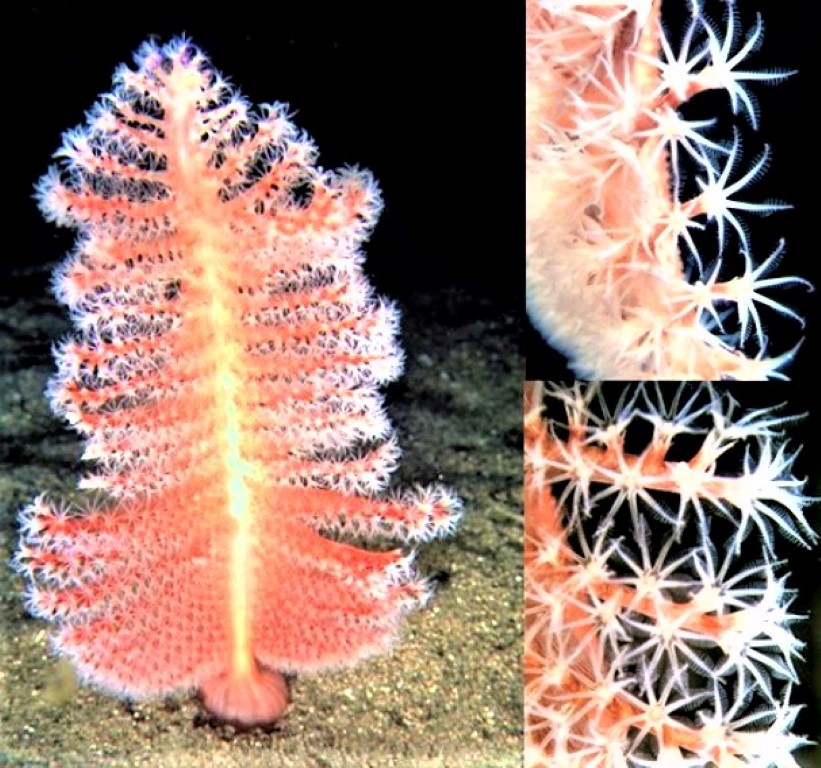 When the young man came back, his girlfriend gave him the net and... Surprise! The net looked exactly like the little sea flower! A real miracle, showing her true love!

Anyhow, the truth about the origins of Burano lace might be quite simple. The inhabitants of the island were mostly fishermen, and their wives were frequently engaged in repairing their men's fishing nets, using rudimental needles and thick thread. Still, after having worked hard on the nets, the women of Burano had to wait for the return of their men for hours... They started then to use thinner needles and threads of higher quality to reproduce those nets, but in a more artistic, refined and creative way, thus obtaining marvelous pieces of lace. 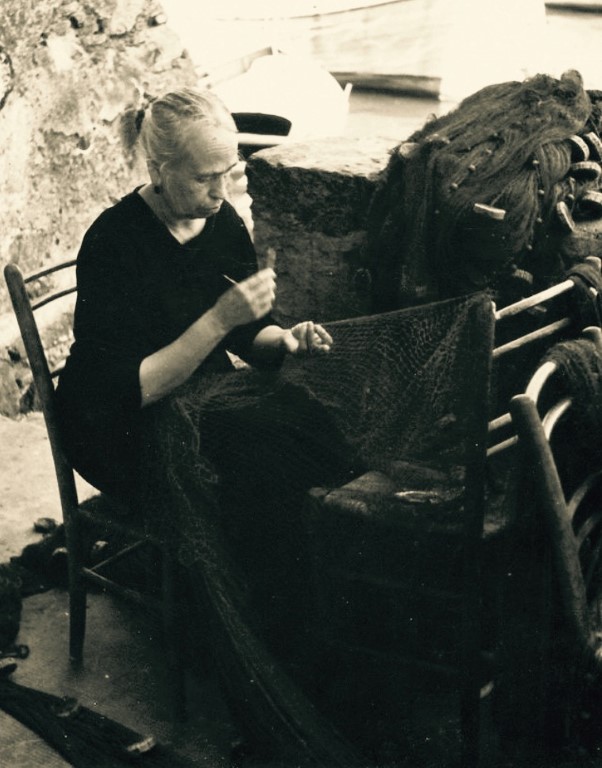 A woman repairs a fishing net 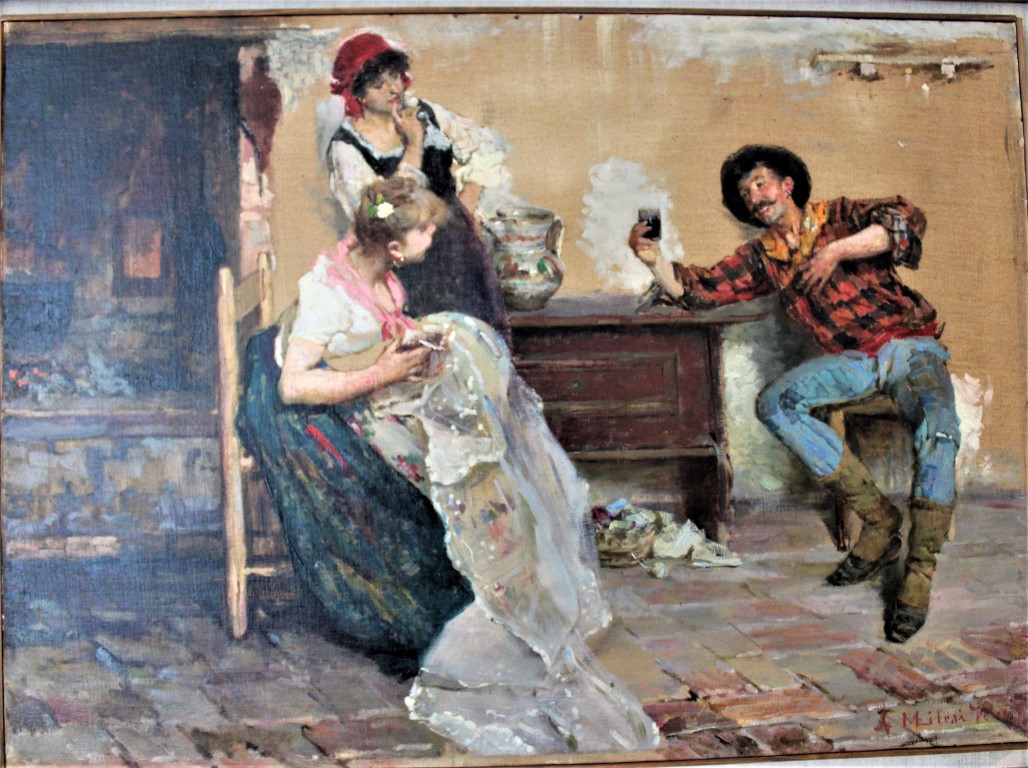 A lace maker and a fisherman (detail from "My Burano", painted on the façade of a house on this island, by G. Rosso)

Burano lace became very popular in Venice in the 16th century, and from here it spread out all over Europe. Wearing capes, gloves, collars with precious lace details became a real status symbol. 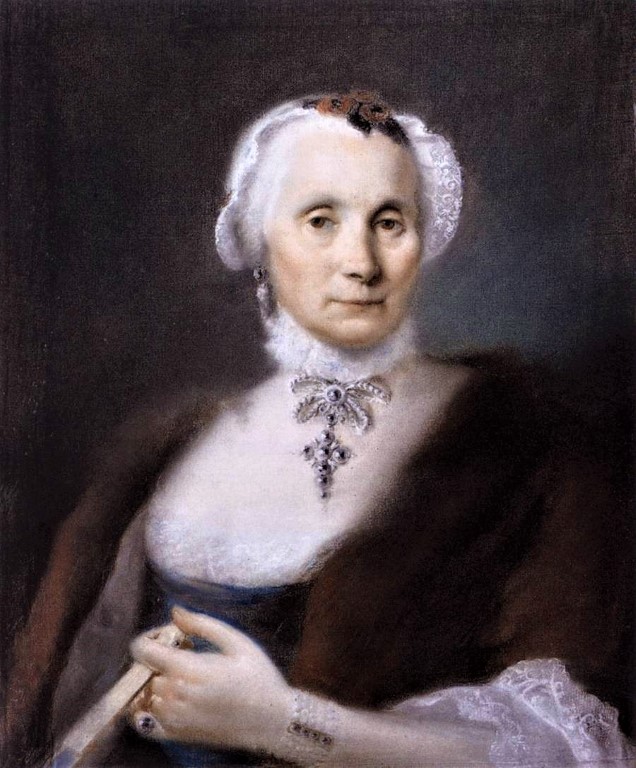 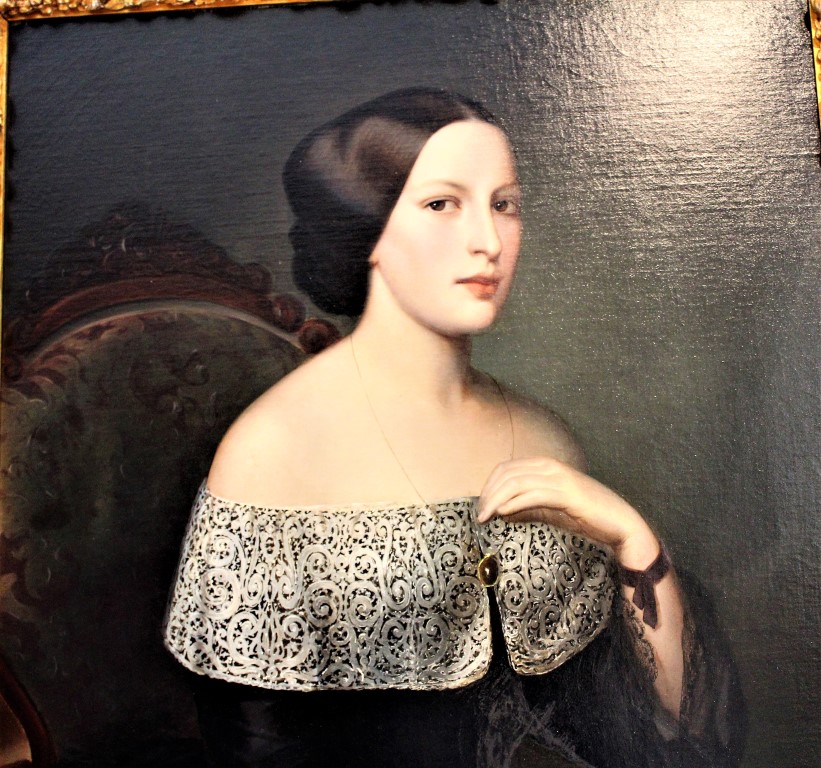 In the 15th century Dogaressa Dandola Malipiero opened the first real lace school. One century later Venice became the most important center in Europe for laces. Quite frequently real workshops could be found in the houses of the Venetian noble ladies. Later Dogaressa Morosina Morosini created one more lace school and workshop on the Giudecca island, where more than 100 lace makers worked hard to satisfy all the requests coming from different countries. 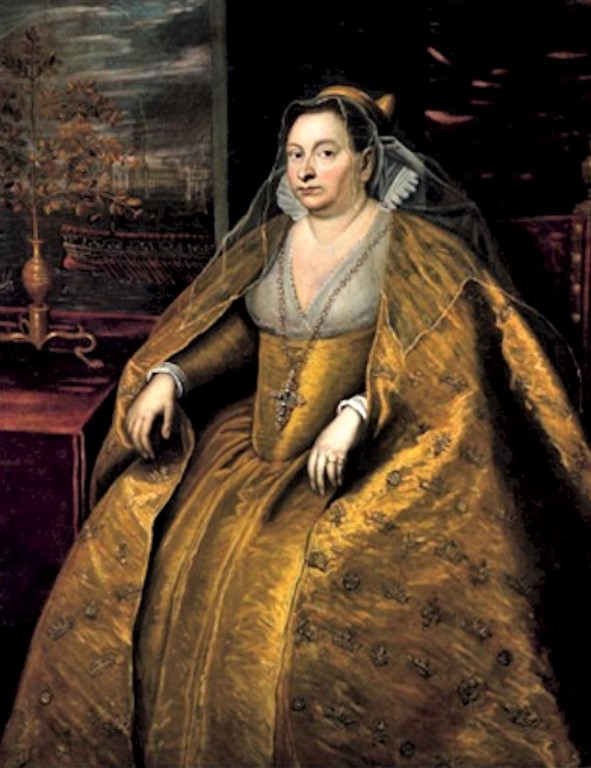 Laces started to be produced also in convents, hospitals, orphanages, charitable institutions run by nuns (not only on the Giudecca island, but also in town, as for example at La Pietà and in St. Zachary's convent): the young ladies hosted there could thus become skilled and could work to pay the nuns back for their maintenance. 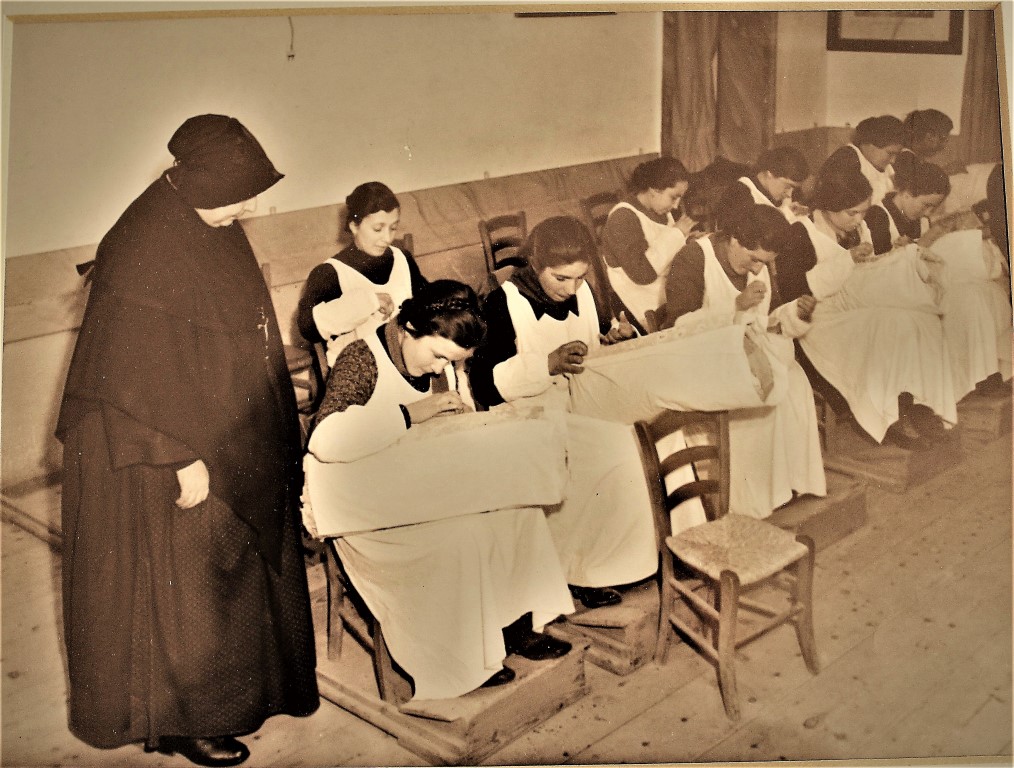 Young girls at the lace school 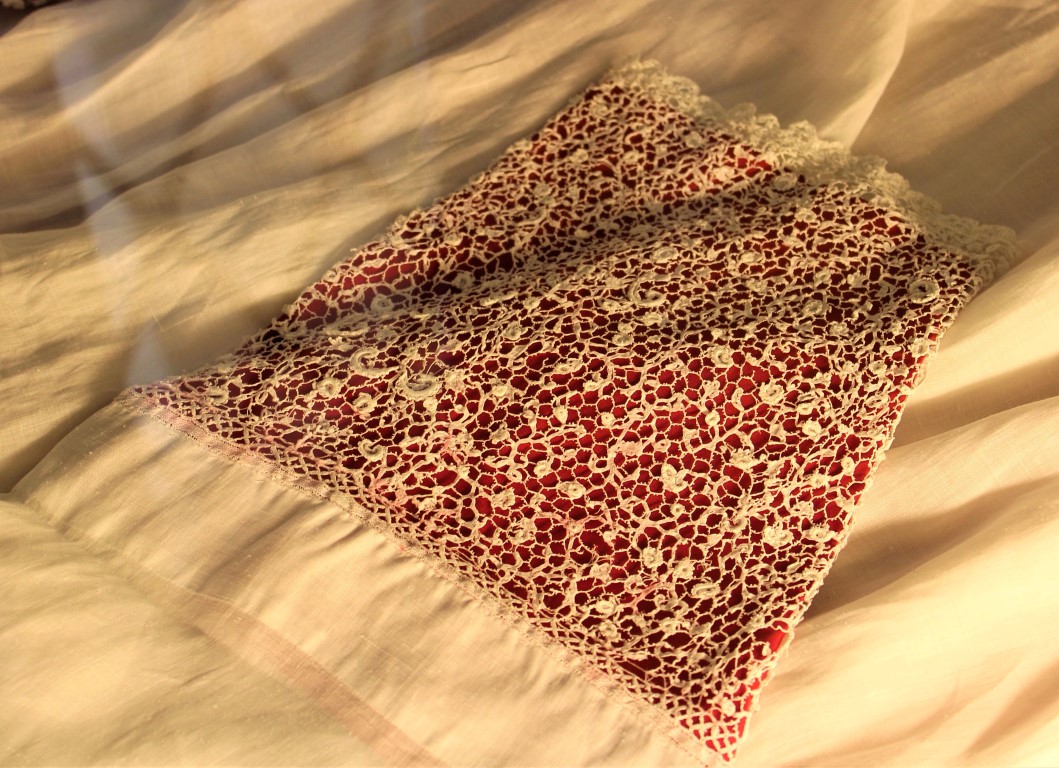 Example of lace, preserved in the museum of La Pietà

In 1872 a lace school in Burano was then opened. It was patronized by Queen Margherita of Savoy, and its aim was to give a new chance to the lace production after its inexorable decline.

Today only few lace makers on Burano continue the tradition of this ancient and precious art. As you enter the lace shops you can see them sitting with their needles and threads as they patiently work to create unique artistic pieces of lace. 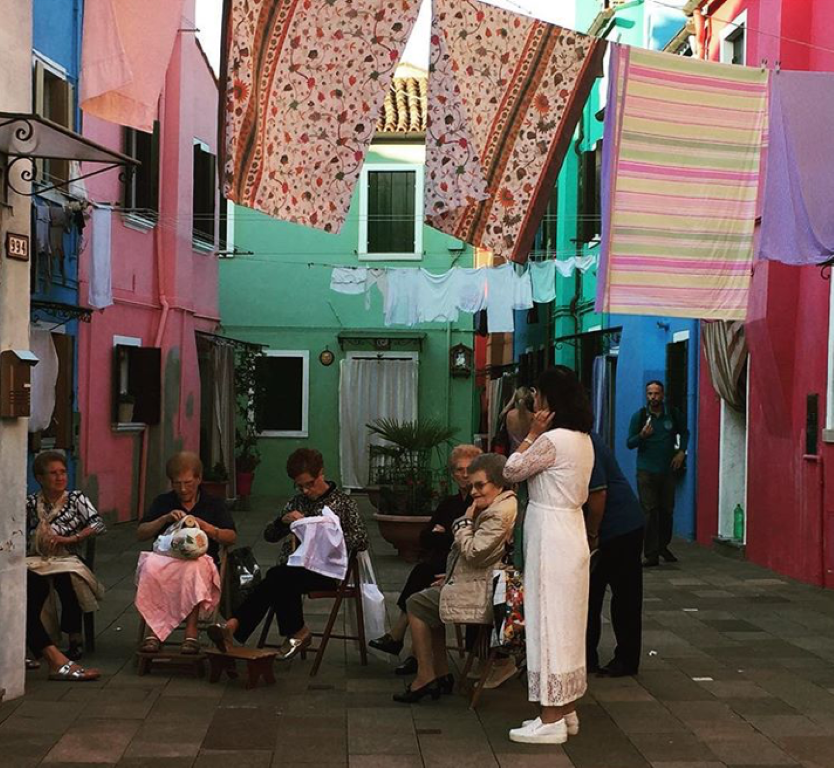 Lace makers working together in a courtyard in Burano

In 1981 the Lace Museum was opened on the island: here you can admire incredible laces and understand the evolution of this tradition. 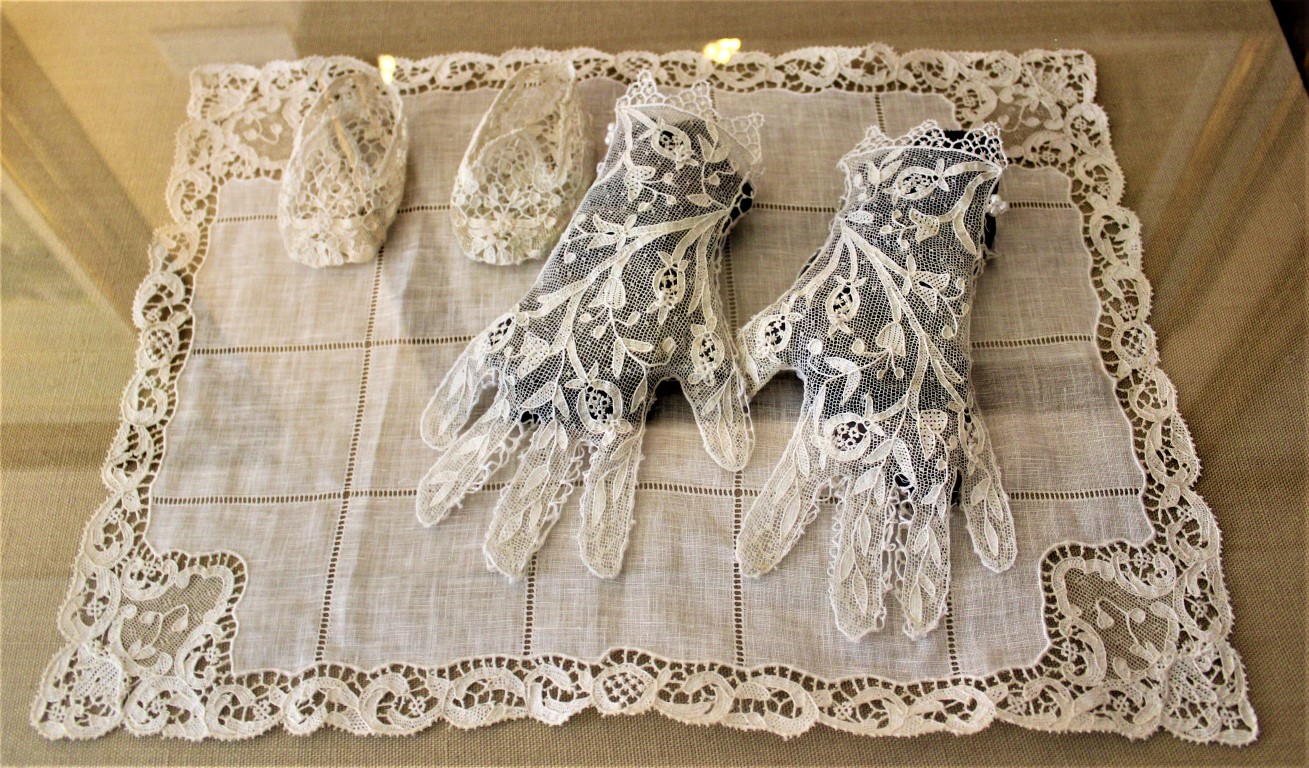 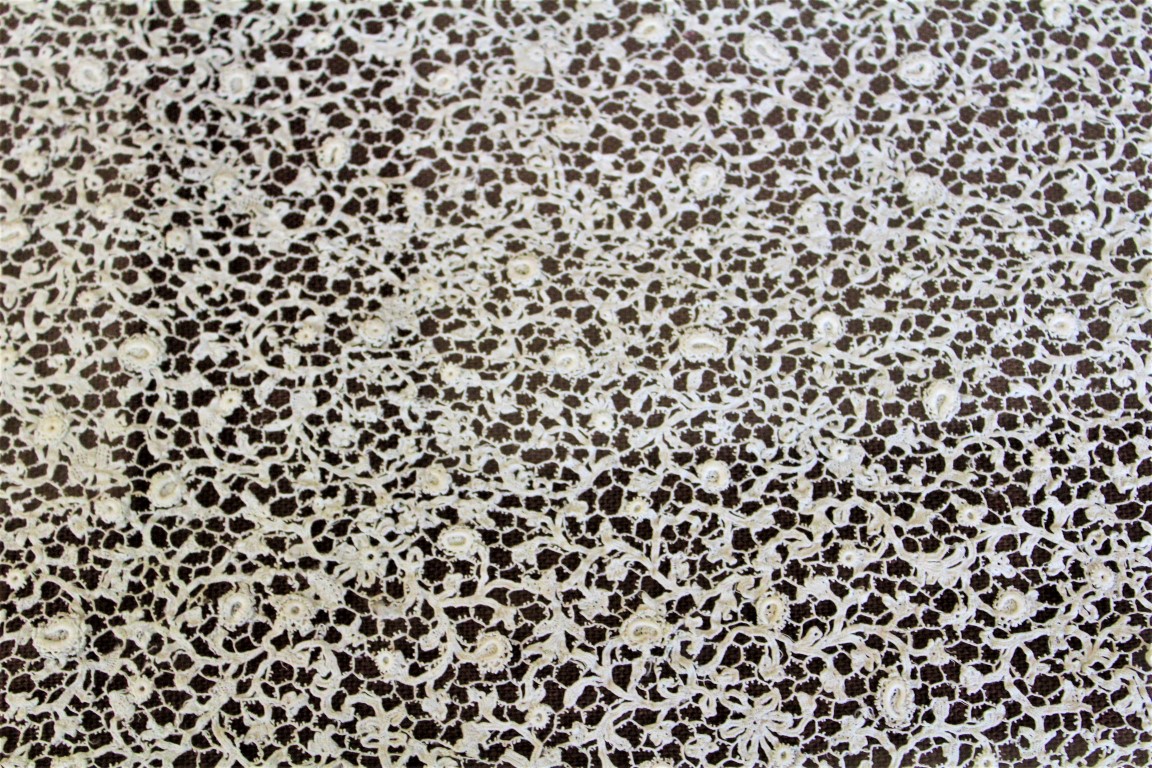 We surely hope that this art will eventually get back to the splendour of past times, as it deserves. It is definitely a marvel of Burano and of the Made-in Italy in general.

And with this detail of "My Burano" by G. Rosso we take leave... Do not miss our next post! 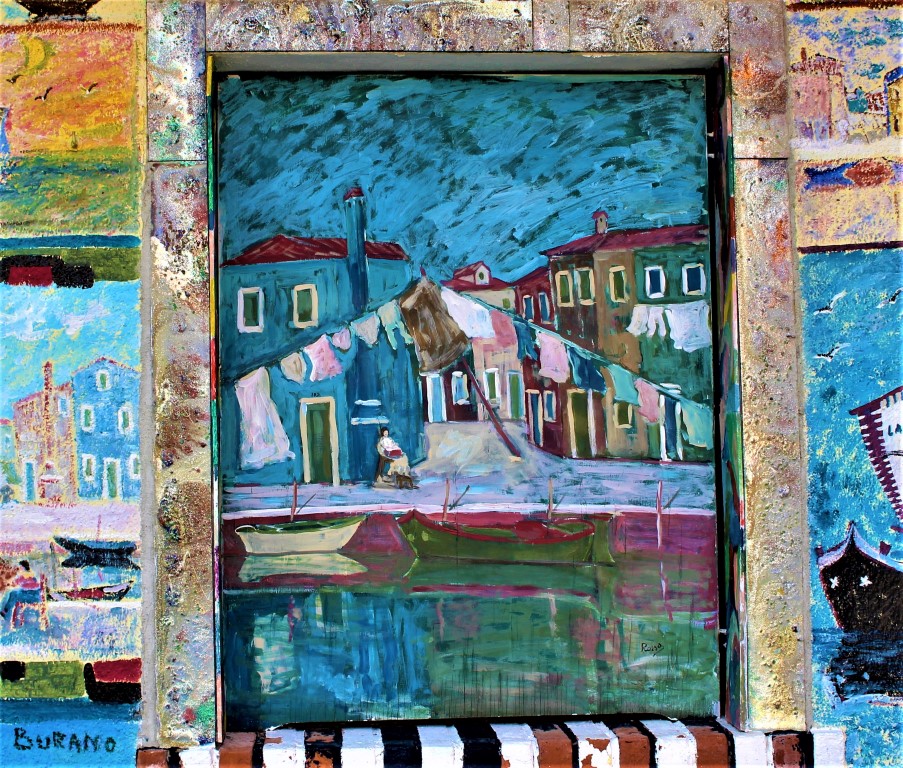