Walking around Venice, you can see quite frequently statues, high-reliefs and bas-reliefs, marble or Istria stone decorations on the façades of houses, palazzos and churches.

Both in the hidden corners of Venice and in the most popular areas, we are literally surrounded by sculptures that remain frequently unnoticed by visitors.
Sometimes tourists do take pictures of them, although not knowing their meaning and their history. With this post we would like to introduce some sculptures that are well known by the Venetians in general and by tour guides in particular.

Let us start from an area that is not normally included in the typical tours: Campo Dei Mori, in the Cannaregio district. 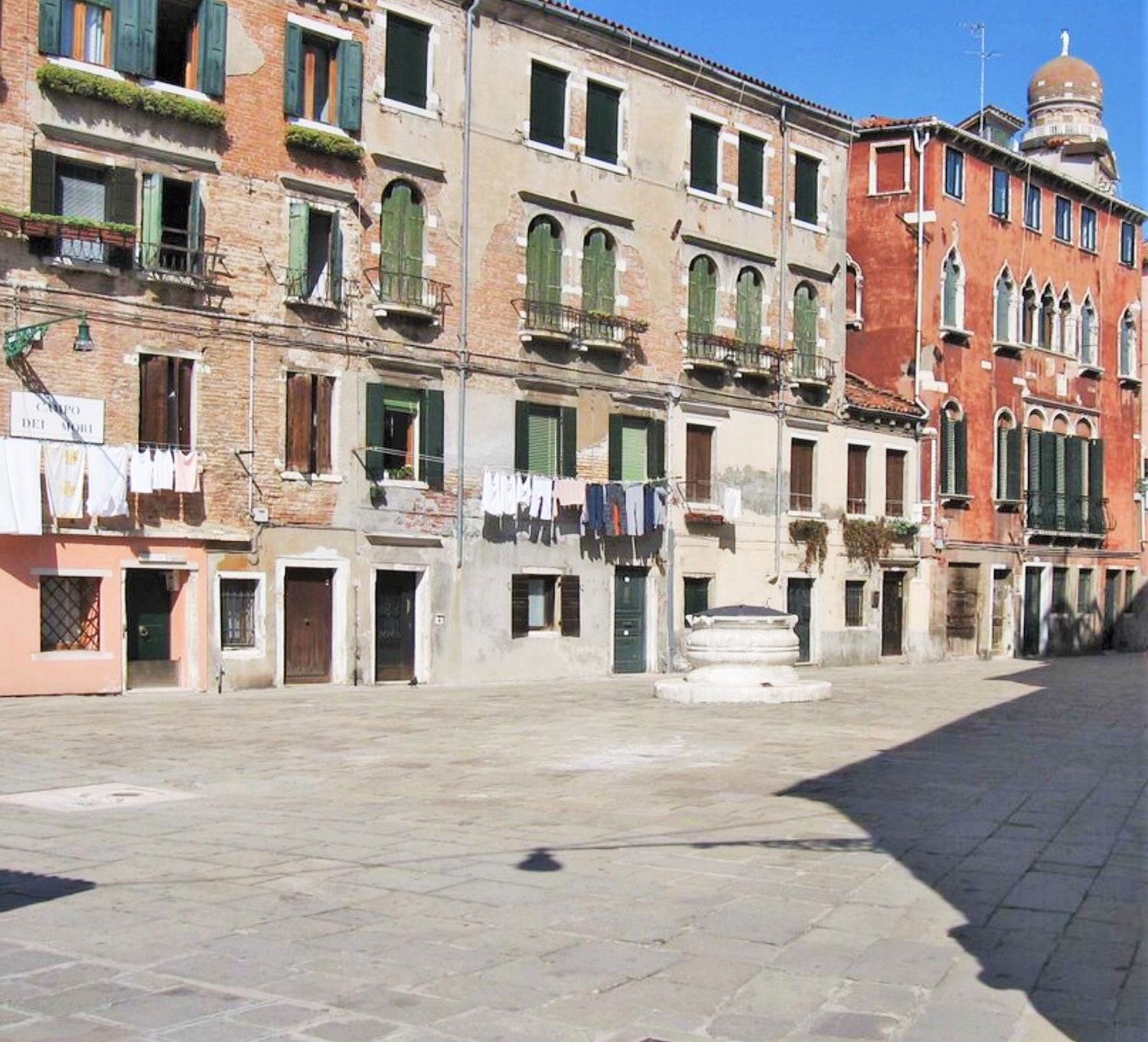 As we start looking around, we are almost immediately attracted by some statues dressed in oriental costumes, "stuck" in the corners and within the walls of a house. These are three brothers who in 1112 left Morea (today called Peloponnesus) and settled down in our cosmopolitan city. They were called the Moors, after the name of their home country, and they eventually gave the name to the campo (Campo Dei Mori in fact literally means the Field of the Moors).

They used to live in the nearby palazzo Mastelli, also known as palazzo of the Camel, because of the presence of the bas-relief of a camel on the façade. 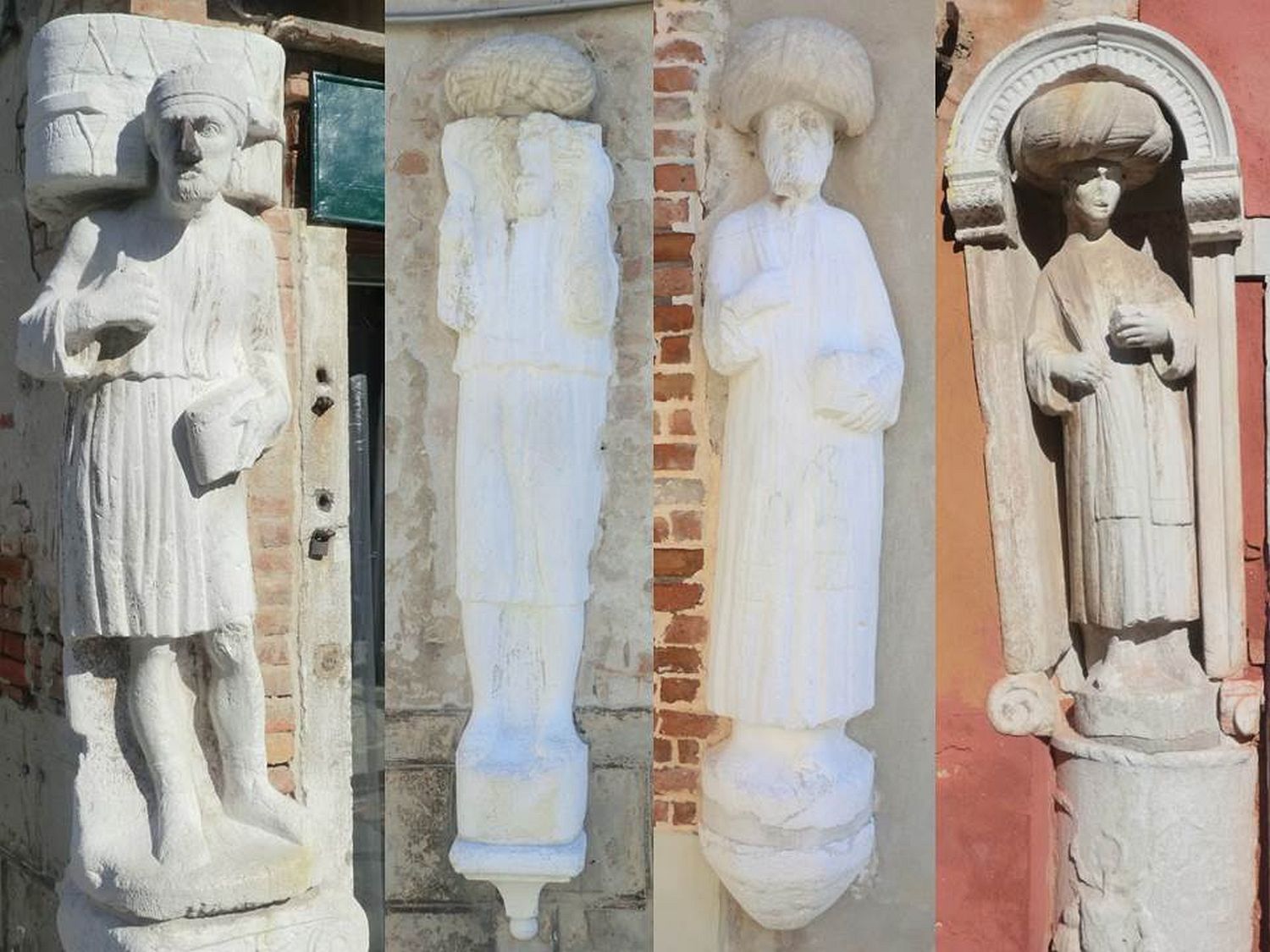 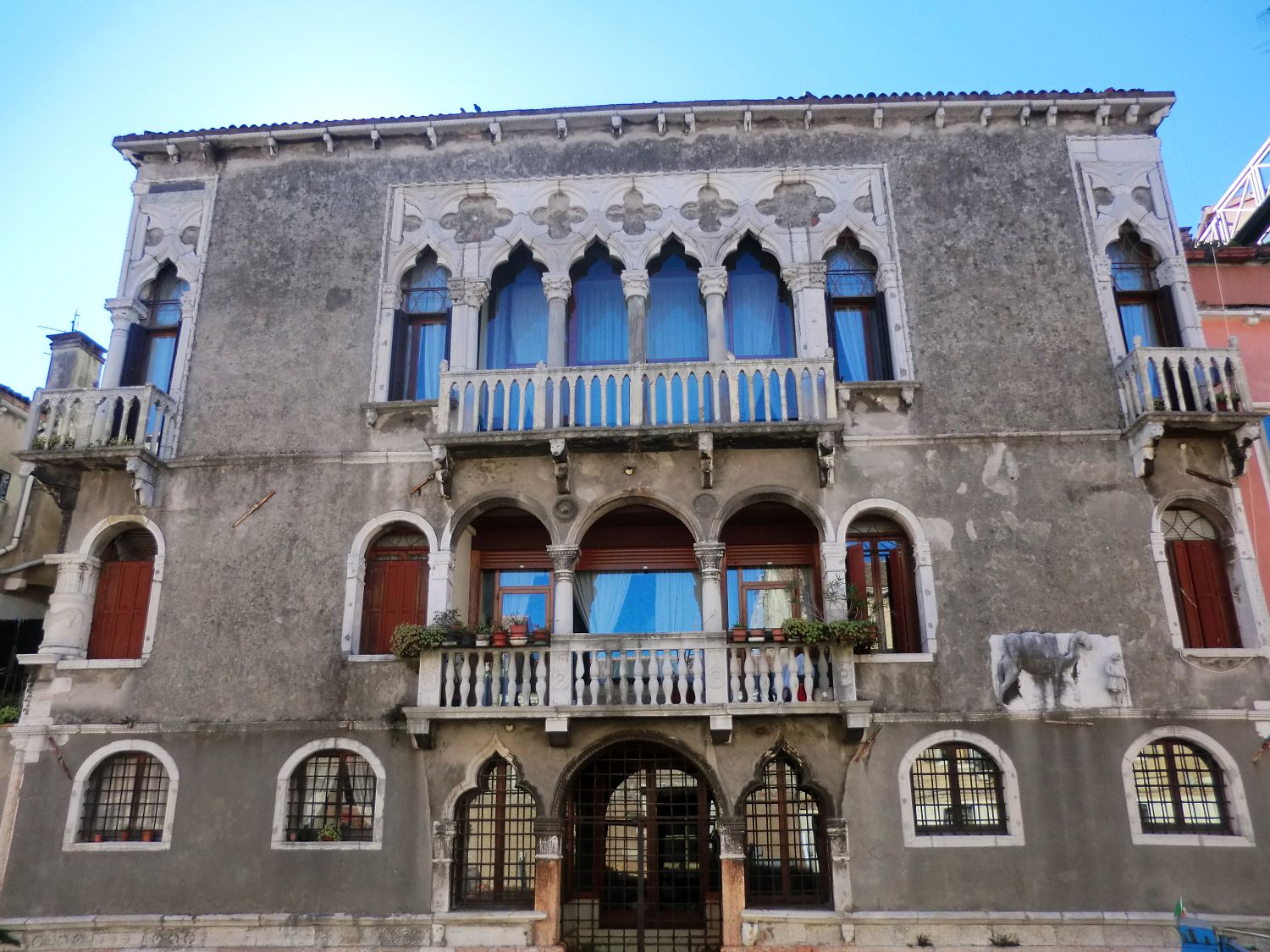 The three Moors Rioba, Sandi and Alfani were greedy merchants who would sell low quality cloth and spices at very high prices, thus becoming quite soon known as tricksters. According to the legend, it was Mary Magdalene that eventually punished them by turning them into stone. There is also a fourth Moor on the wall facing the canal: that is supposedly one of their servants. 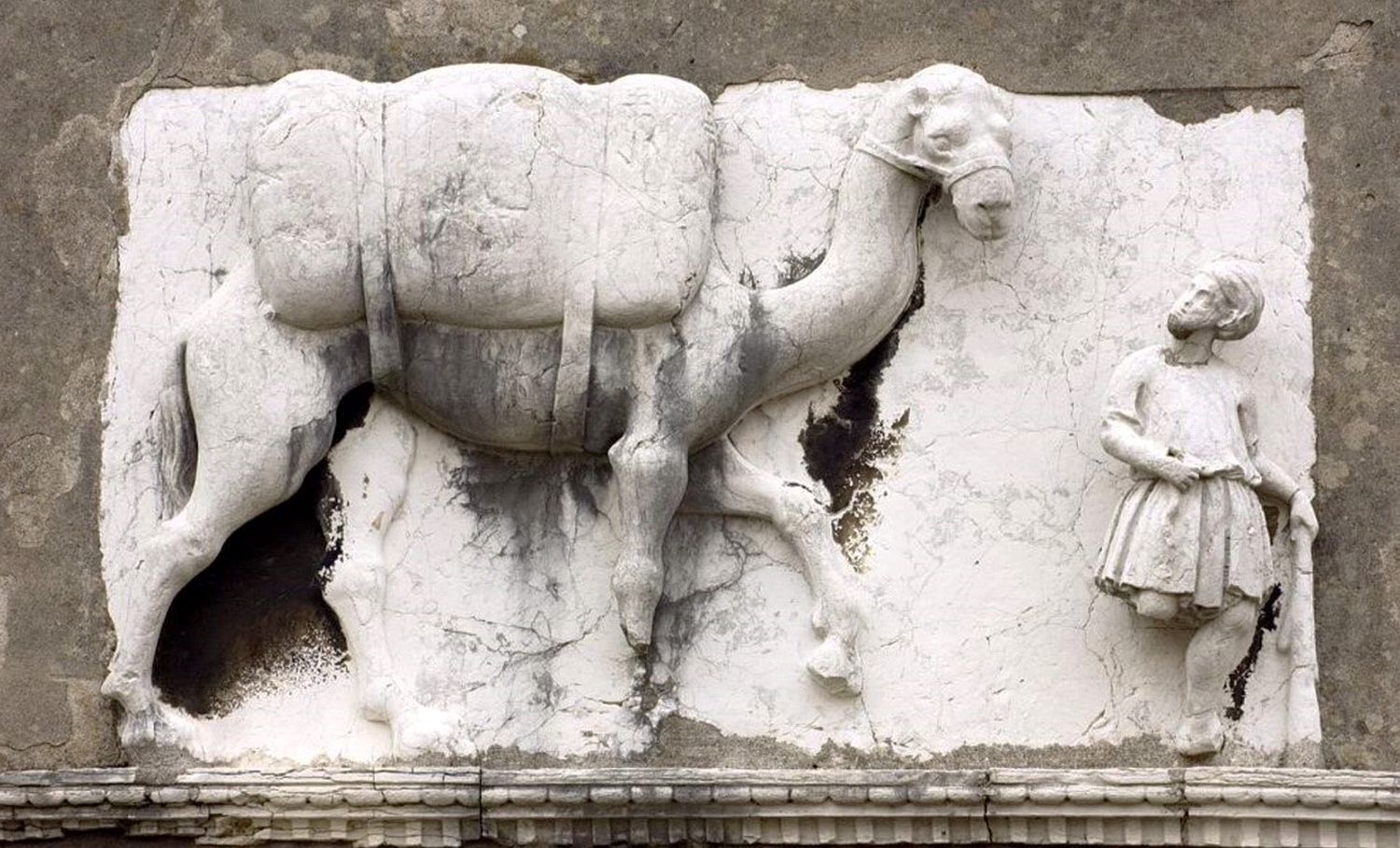 To tell the truth, these sculptures consist of several pieces dating back to different ages, and then assembled in the 1300's. It is interesting to notice that their bases are probably altars of the Roman period. The most famous among the Moors is definitely Mr Rioba, who in the 19th century "broke" his nose, which was later on replaced with a prosaic piece of iron. Nowadays it would be possible to restore the nose quite perfectly, as if it was an operation of plastic surgery... But no, this could not be acceptable by the locals, who keep touching the ugly piece of iron in hope of good luck. 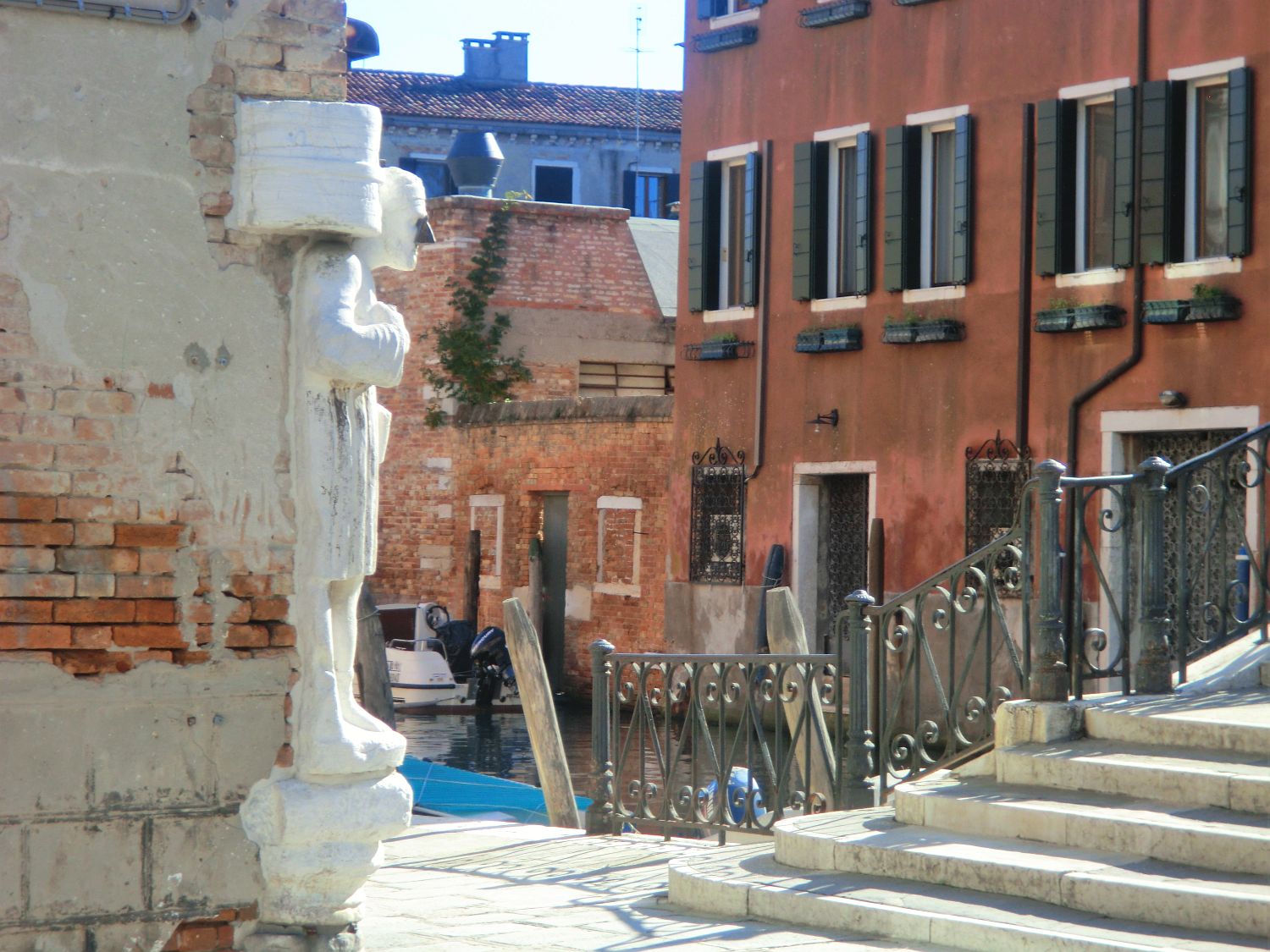 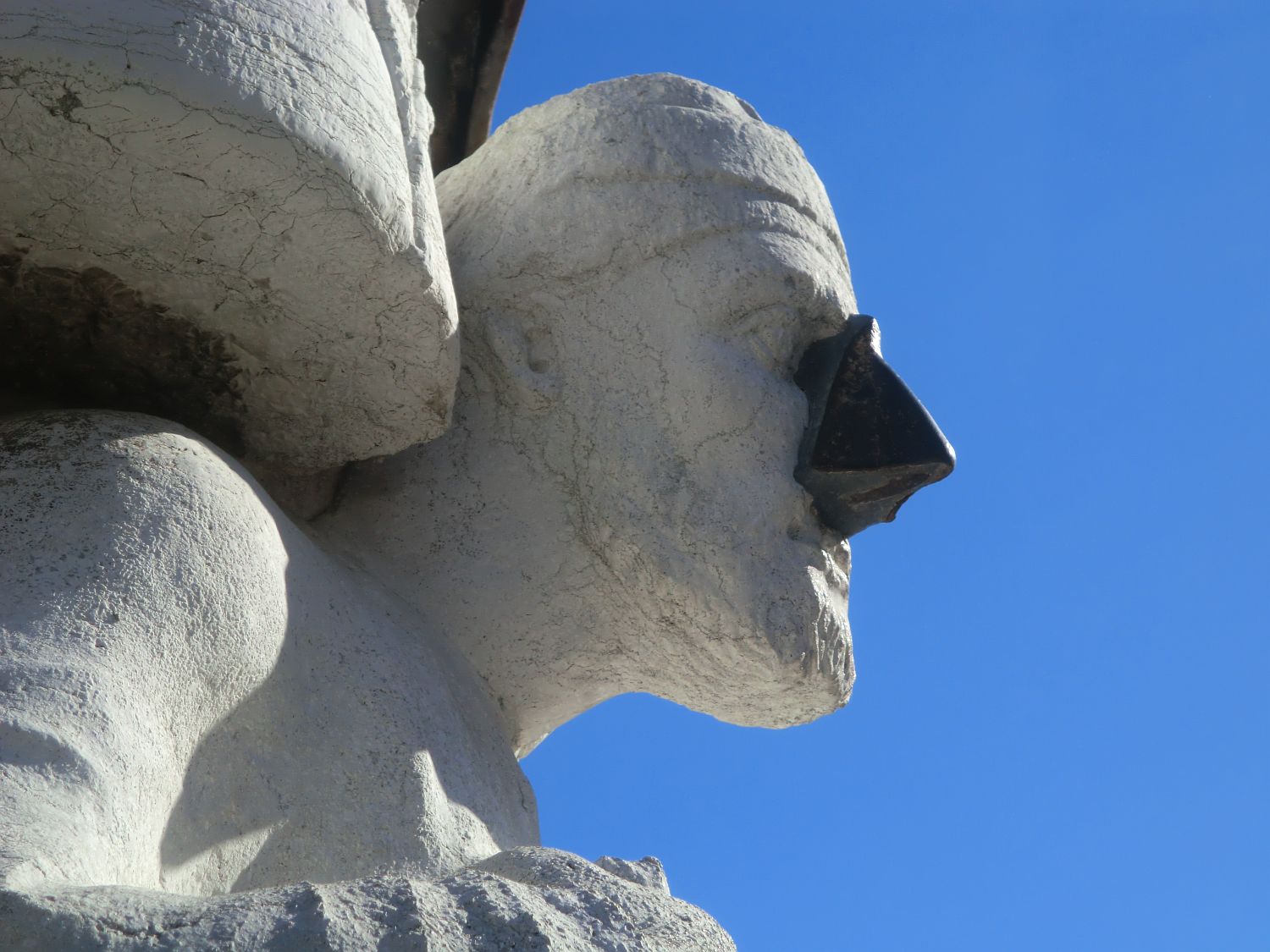 Rioba in the past acquired the same function that Pasquino had in Rome: the Venetians would attach to the sculpture little poems, letters, satirical notes, protesting against some popular and influent figures of the Venetian society, as well as against the Government of the Venetian Republic. Rioba became so famous that in 1848 a particular newspaper started to be published: "The Shade of Mr Antonio Rioba". This character has thus become immortal. Yet, this is not the end of the story. In 2010 during the night between April 30 and May 1, Rioba was beheaded! His head was found two days later and then put back to the place where it belonged. Mr Rioba is always there, he's waiting for you: although his appearance might look quite grumpy, do not hesitate to touch his big ugly nose... And good luck!

Another relevant statue can be found in one of the most frequented places in town, at the footsteps of the Rialto Bridge, in Campo San Giacometto: it is the famous hunchback of Rialto. 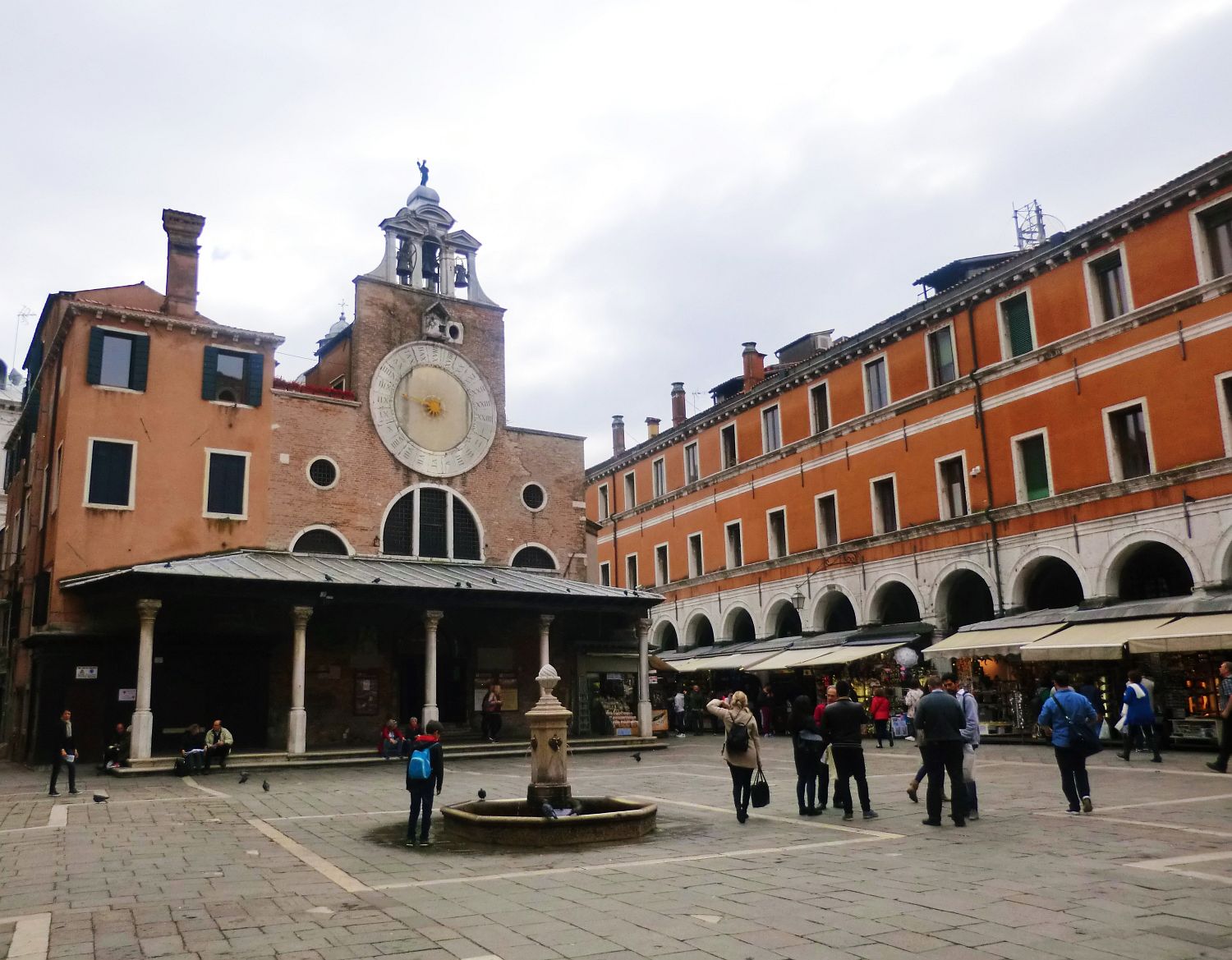 It is not really a hunchback. It represents a curved man, kneeling down, holding a little staircase on his shoulders. From the top of this short staircase criers and messengers would read aloud important documents. This statue dates back to the 16th century. It was placed on purpose right in the commercial heart of Venice: merchants, noblemen, captains, bankers used to meet here daily to develop their business. Right here the Bancogiro stood, a real bank. This area was also full of common Venetians, who came to the market to purchase anything they needed. Everybody then could hear the important announcements cried out from thehunchback: decisions and new laws of the Venetian Republic, the dates of departure of the commercial galleys, judgments and convictions made by the Government of the Most Serene Republic. After having been read aloud, these documents were attached to the statue, so that they could be read by those who were interested. 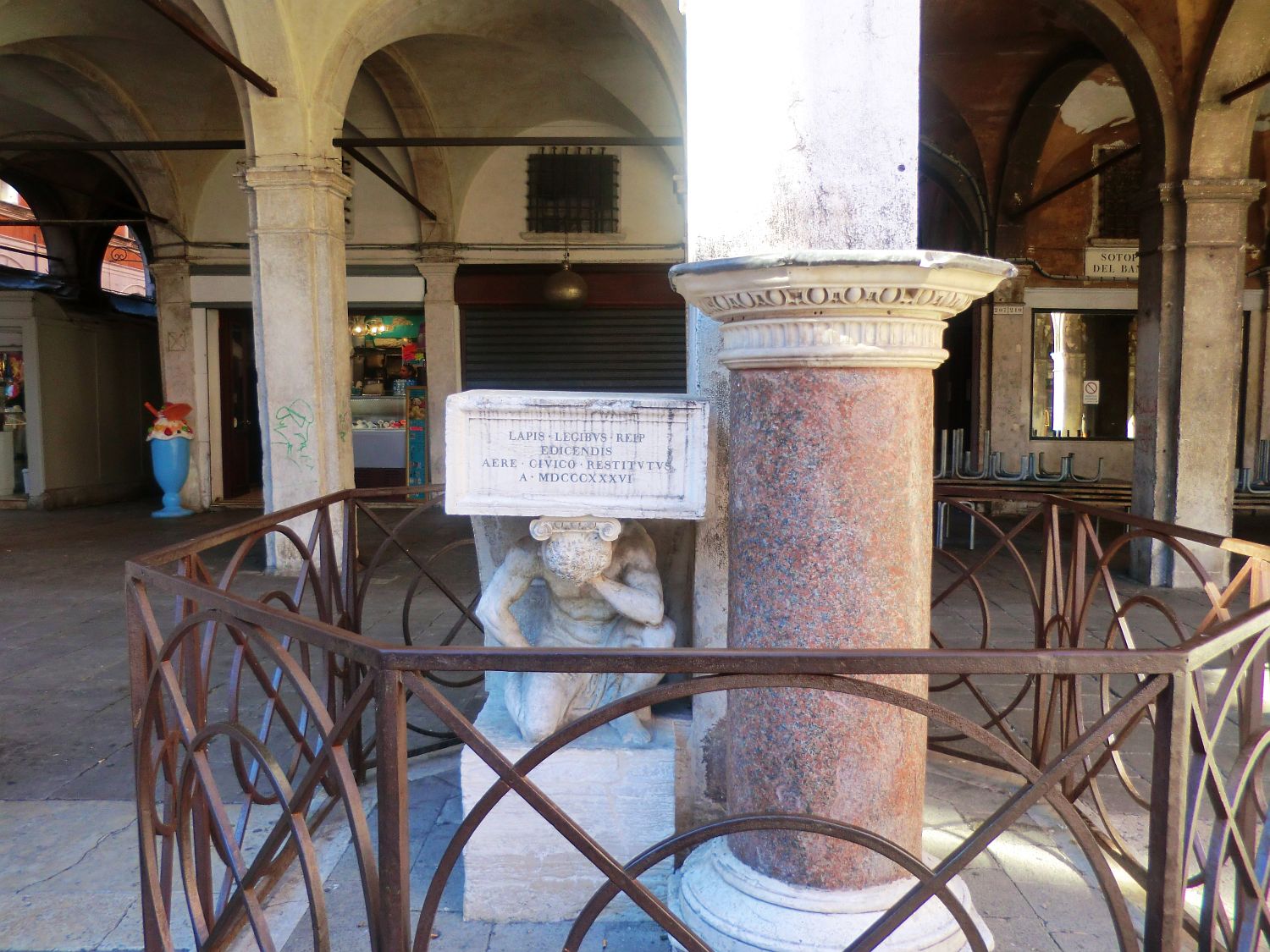 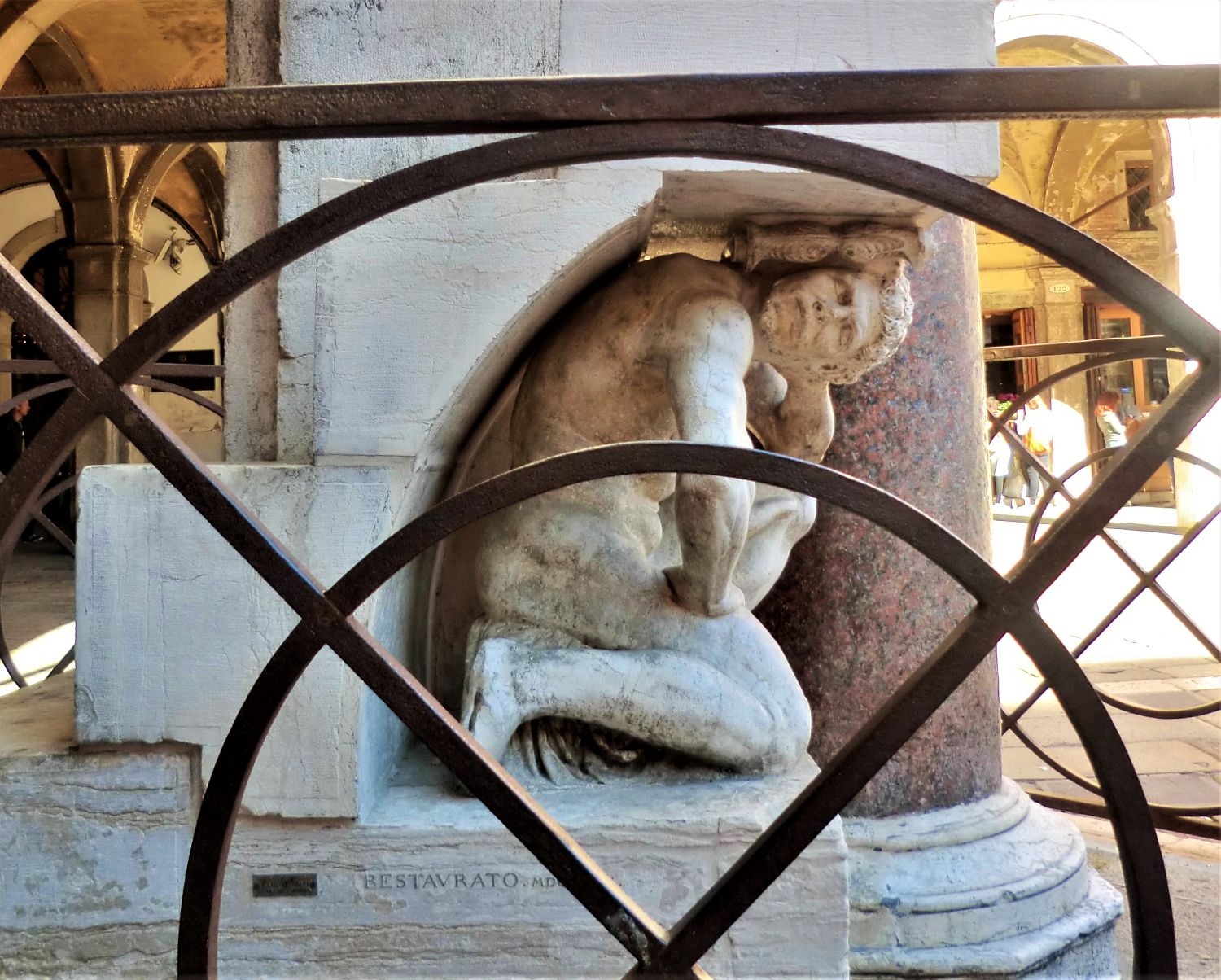 This sculpture occupied a strategic position, and the Government could then be quite sure that everyone would be informed of all the new dispositions and changes issued by the political authorities. Moreover, this statue had another important function: the criminals condemned to fustigation started their run from the two columns of St. Mark and St. Theodore, in St. Mark's, flanked by people who bit and offended them, all the way through the Mercerie street and across the Rialto Bridge, and their pain would end as soon as they reached the hunchback. As a consequence, criminals would frequently kiss it at the end of their punishment.
In order to prevent the hunchback from becoming a symbol to adore, in 1545 the Senate ordered that a cross and a winged lion should be carved on a column nearby, and this became the new place where the sufferings ended and where the condemned could give their "kiss of freedom". 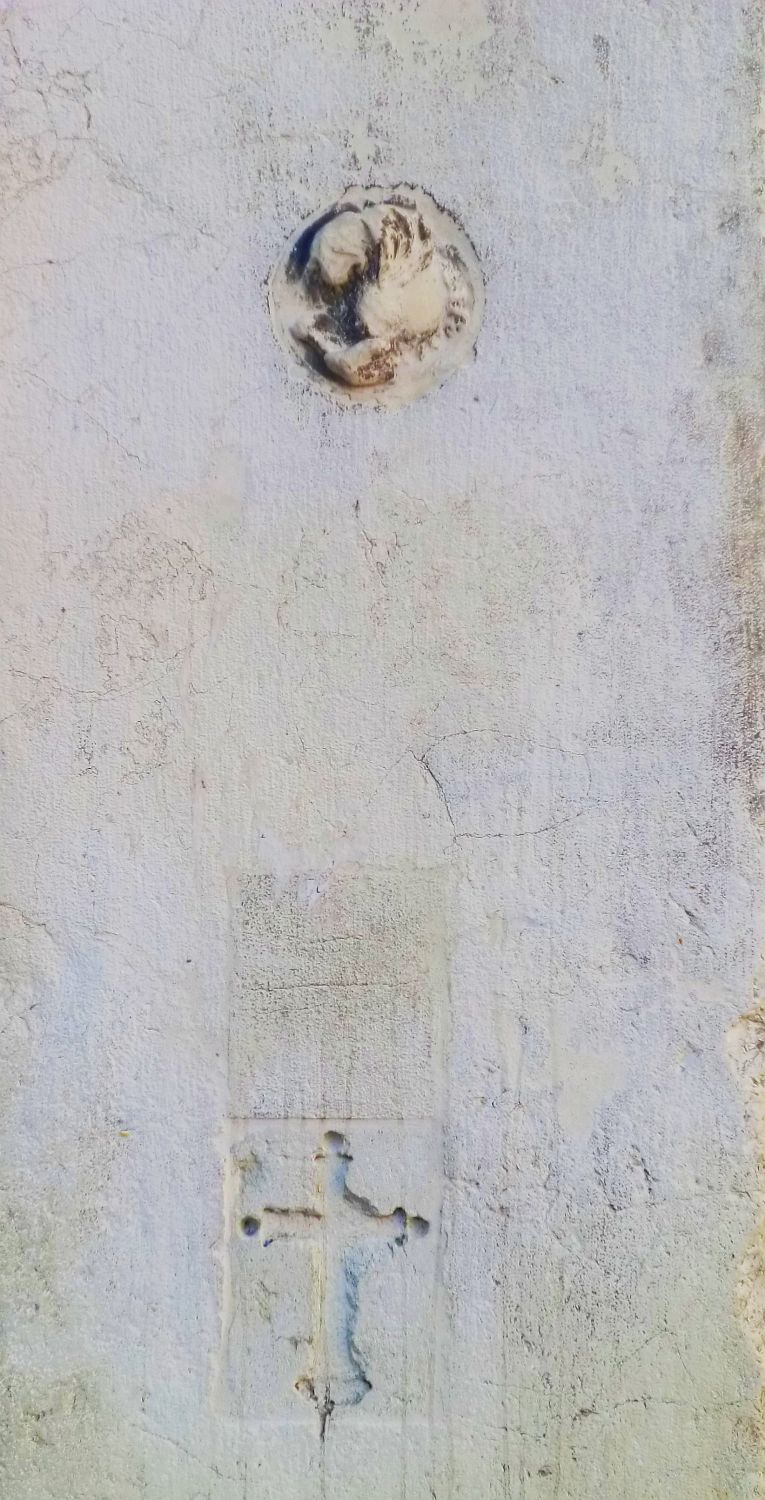 Let us now leave this frenetic campo and procede towards St. Mark's Square. When there are not too many tourists, this walk is pleasant, you can enjoy the atmosphere, as well as the shop windows... But do not feel too self confident! Just a few steps before the Square, very close to the arch of the Clock Tower, if you look up you can see an old lady leaning out of a window with something quite heavy that is about to fall on your heads. This is Mrs Giustina Rossi, the "old lady of the mortar". 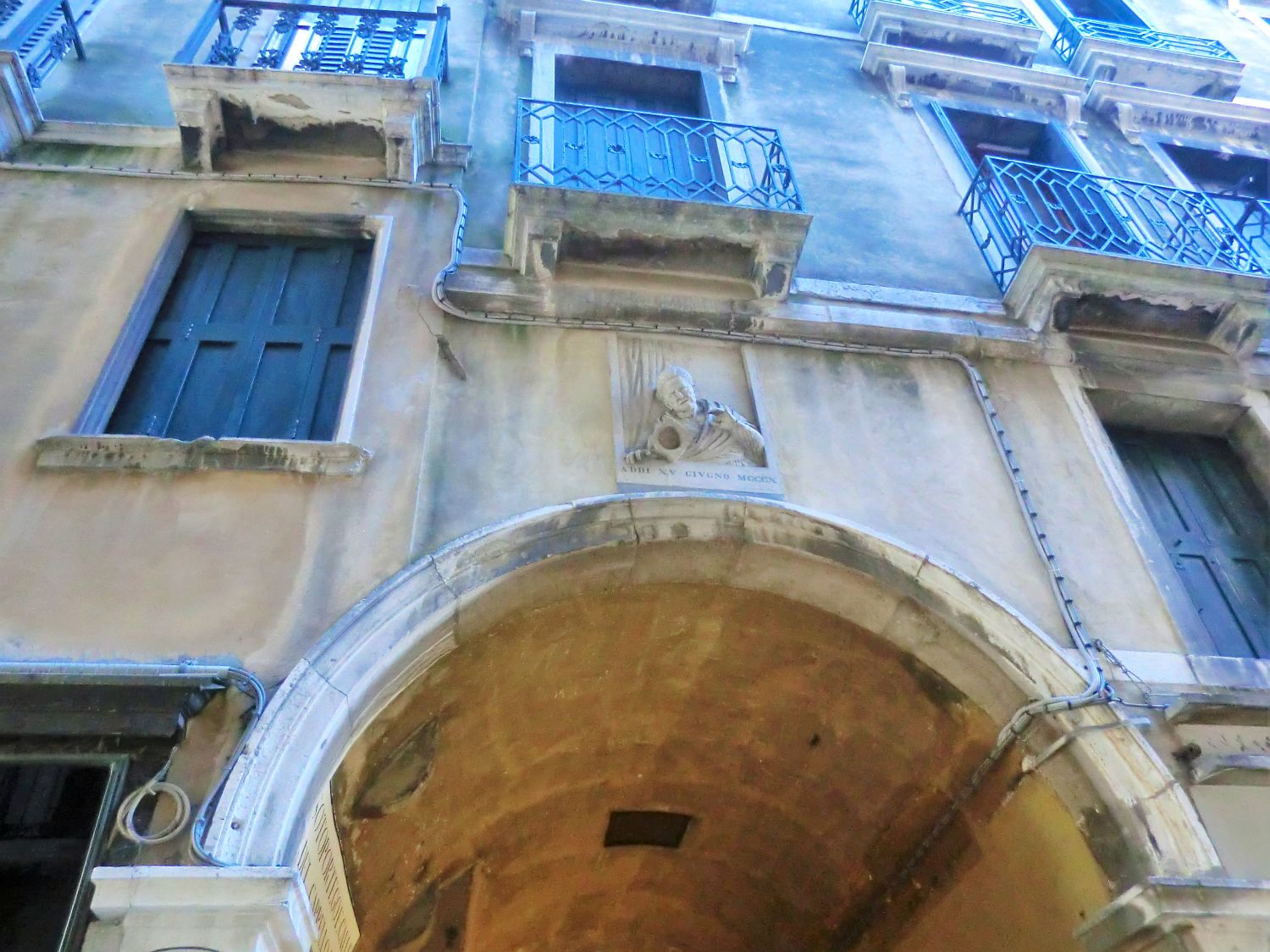 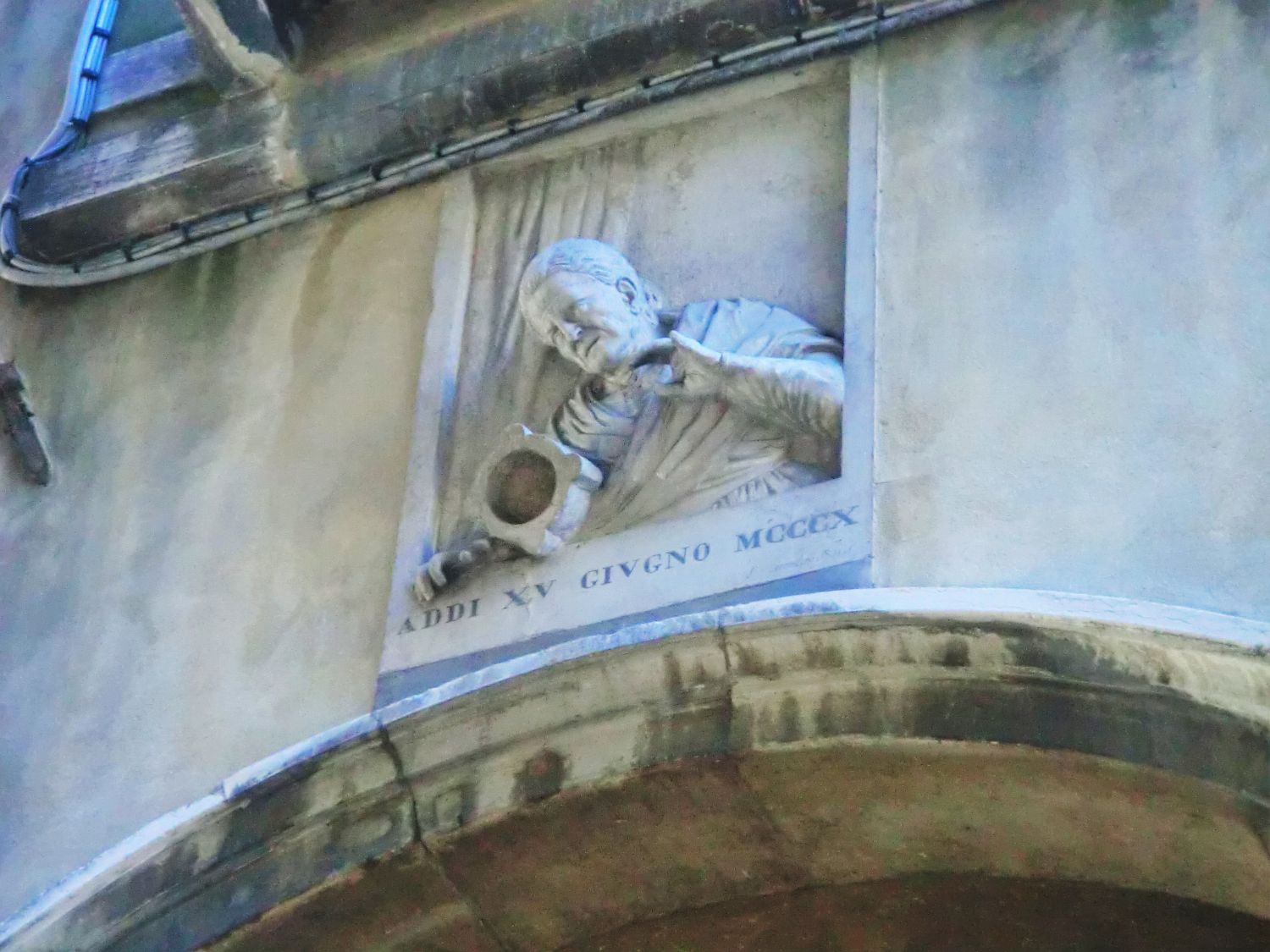 This relief reminds of a relevant event that took place in the Venetian history.
A young noble rebel, Baiamonte Tiepolo, in 1310 organized a conspiracy, together with other members of the Venetian nobility, against Doge Pietro Gradenigo. Try to imagine the rebels yelling and making noise as they approached St. Mark's Square from the nearby alleys! Disturbed by all this noise, and definitely curious about what was going on, Giustina opened the window to take a look. Unfortunately, the heavy mortar she was holding fell off the window (was it by chance? or was it done on purpose?) and hit the flag bearer of the rebels in his head, killing him immediately. Having lost their main reference, the rebels started to panic and eventually they were quickly defeated by the soldiers of the Republic.
This painting, today in the Querini Stampalia Museum, by the Venetian master Gabriele Bella (1730-1799), represents the exact moment when Giustina opens her window and causes disarray among the rebels. 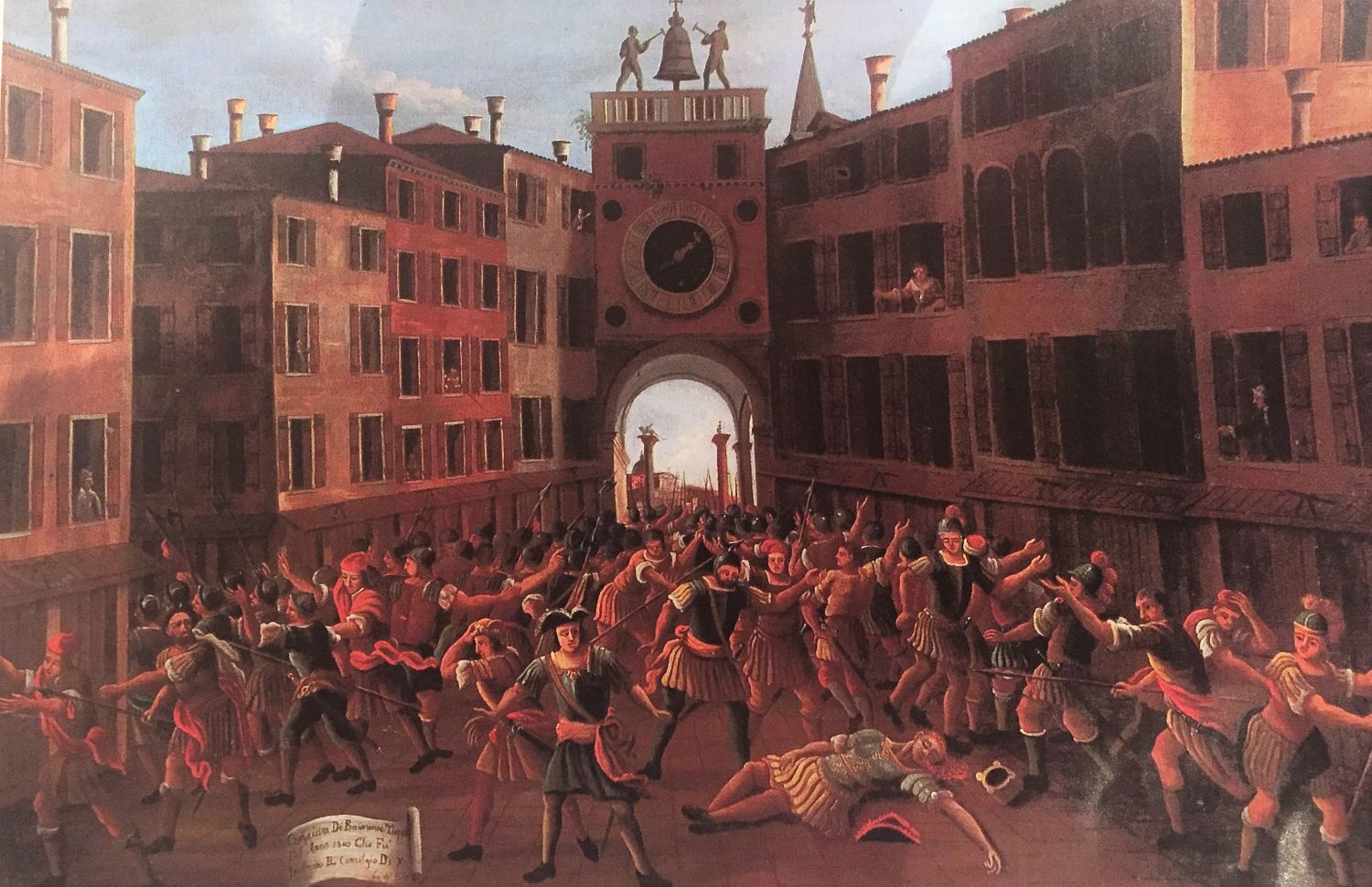 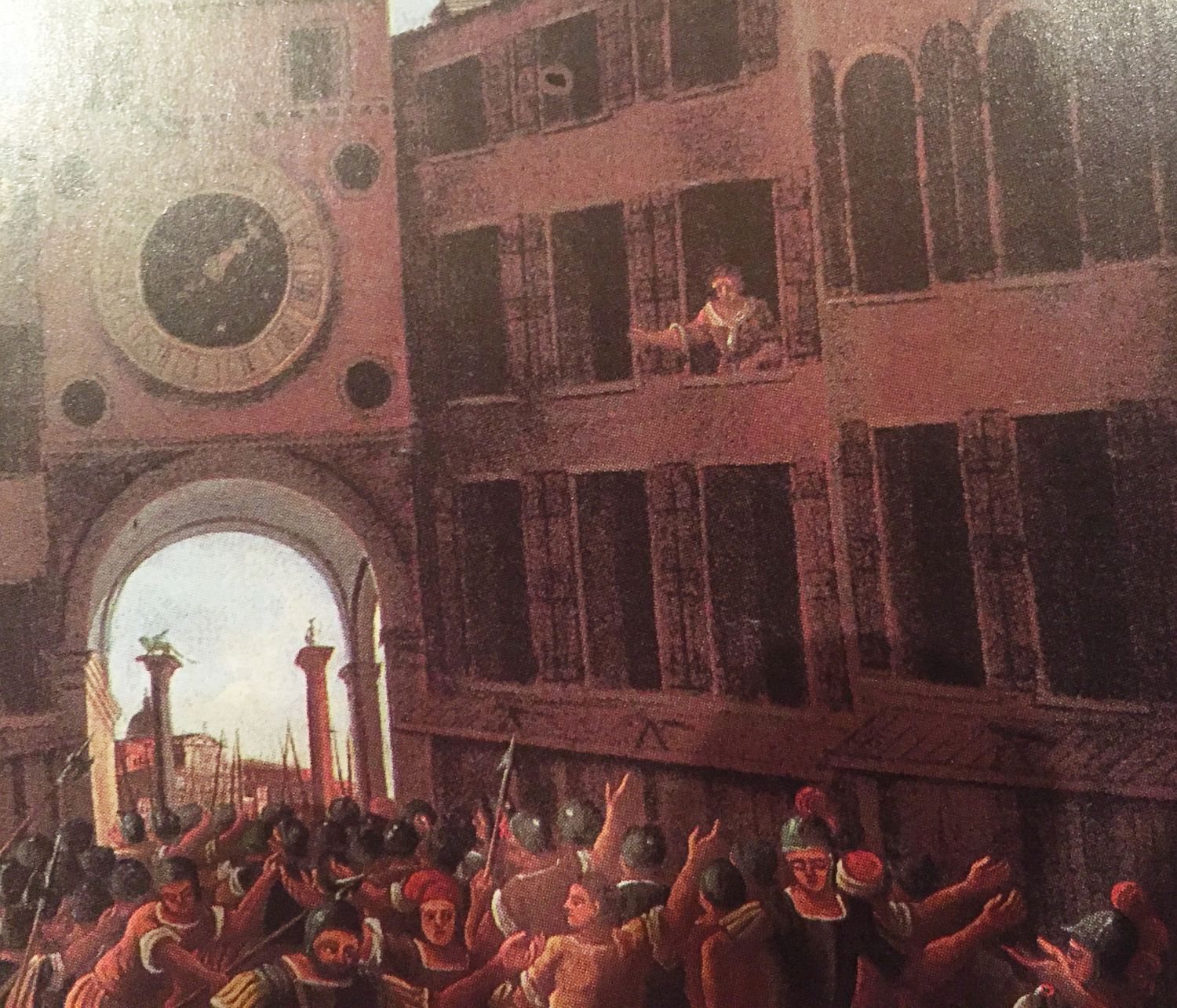 Giustina then became known as the old lady that saved the Doge's life and the life of the State. As a reward, she asked for herself and for all her descendants that the rent of her house would not be raised, and this in fact was granted for almost 500 years, up till the end of the Venetian Republic. She was also granted the privilege of displaying out of her window the Venetian flag every year on June 15, the date of the anniversary of the conspiracy, and on important feasts and celebrations. The sculpture that we can see today, representing Giustina with her mortar, was placed up there in the middle of the 19th century.

Last but not least, we would like to introduce to you another curious sculpture that you can find at the footsteps of St. Mark's column by the quay: Maroco of the Melons. 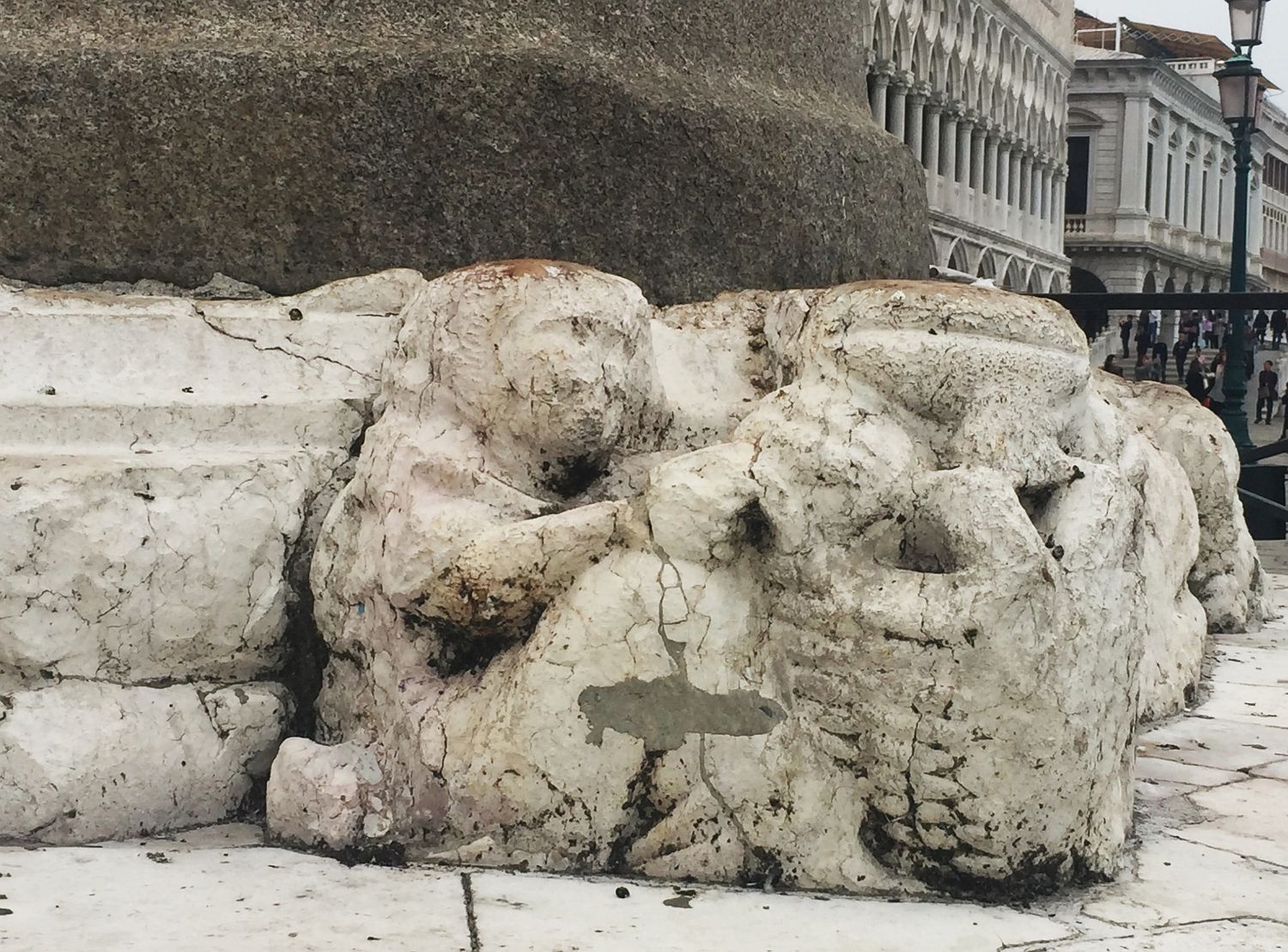 This sculpture is not really well preserved, due to weathering and to the birds, pigeons in particular. This was the area where a variety of little shops once stood.
Maroco was a melon vendor. His job was humble, but his statue became quite popular instead: on top of it, in fact, the Venetians used to attach satirical notes and letters meant to criticize the Government of the Republic or to ironically denigrate the extravagant behavior of some illustrious representatives of the noble class. This was after all a good way to inform the political institutions of the discontent of the citizens. Maroco then started to give voice both to serious Venetians and to mockers, who would frequently use this sculpture for their notes and mockery, since it is located so close to the Doges' Palace, the seat of the Government, the political heart of the city. 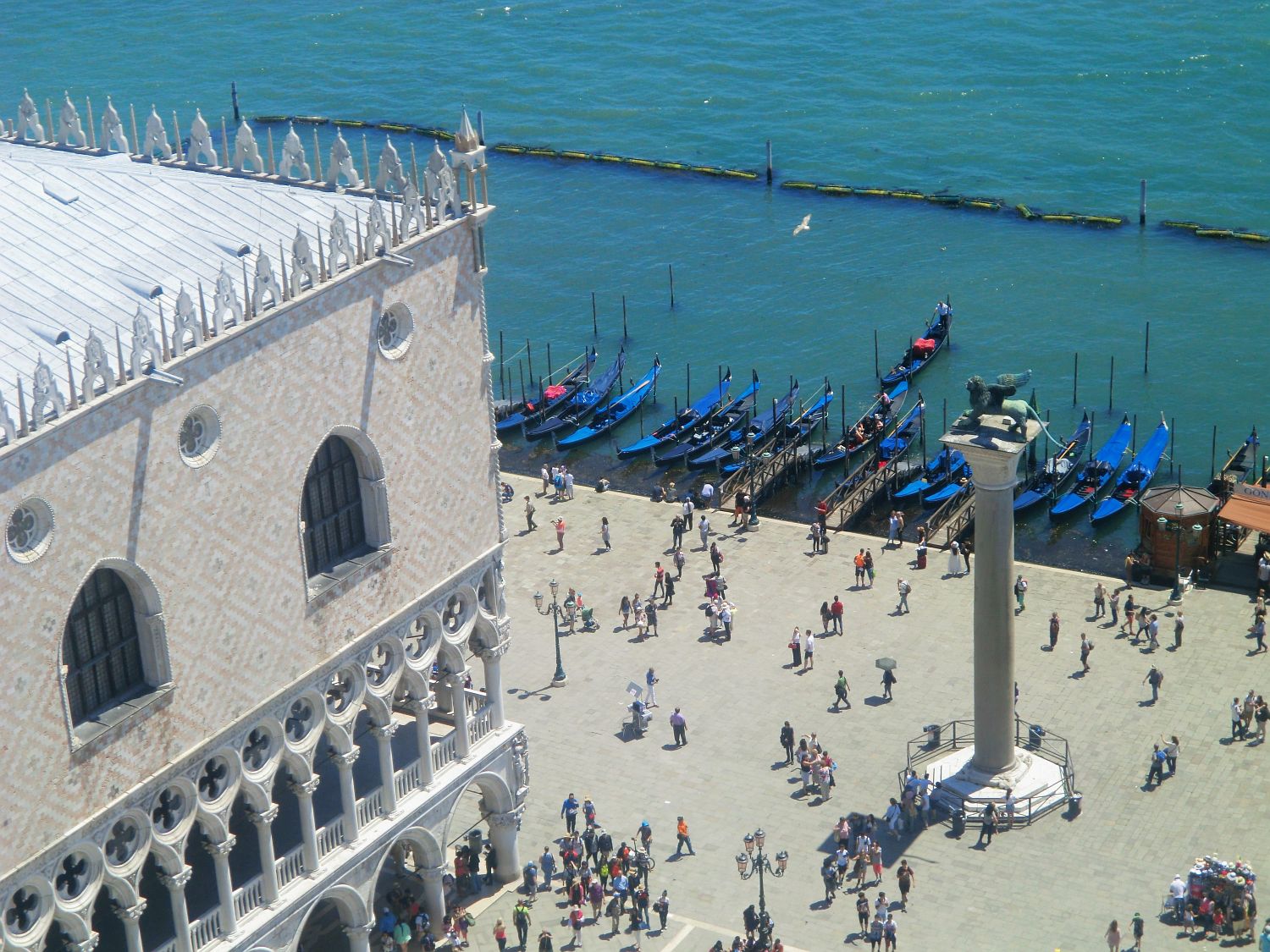 These are only some of the famous sculptures in Venice. There are many more... And there would be much more to say about the characters we have been writing about... But this would involve quite complex themes concerning the whole history of the Most Serene Republic. Hoping to have amused you a little, we definitely invite you to come to Venice to find out more stories!

Once again we take leave with a picture... This is something we have not talked about in our post, but we hope that it can become some sort of an invitation for you to come and visit the city with us...
And please do not mind the surly expression of this face! Hope to see you soon! 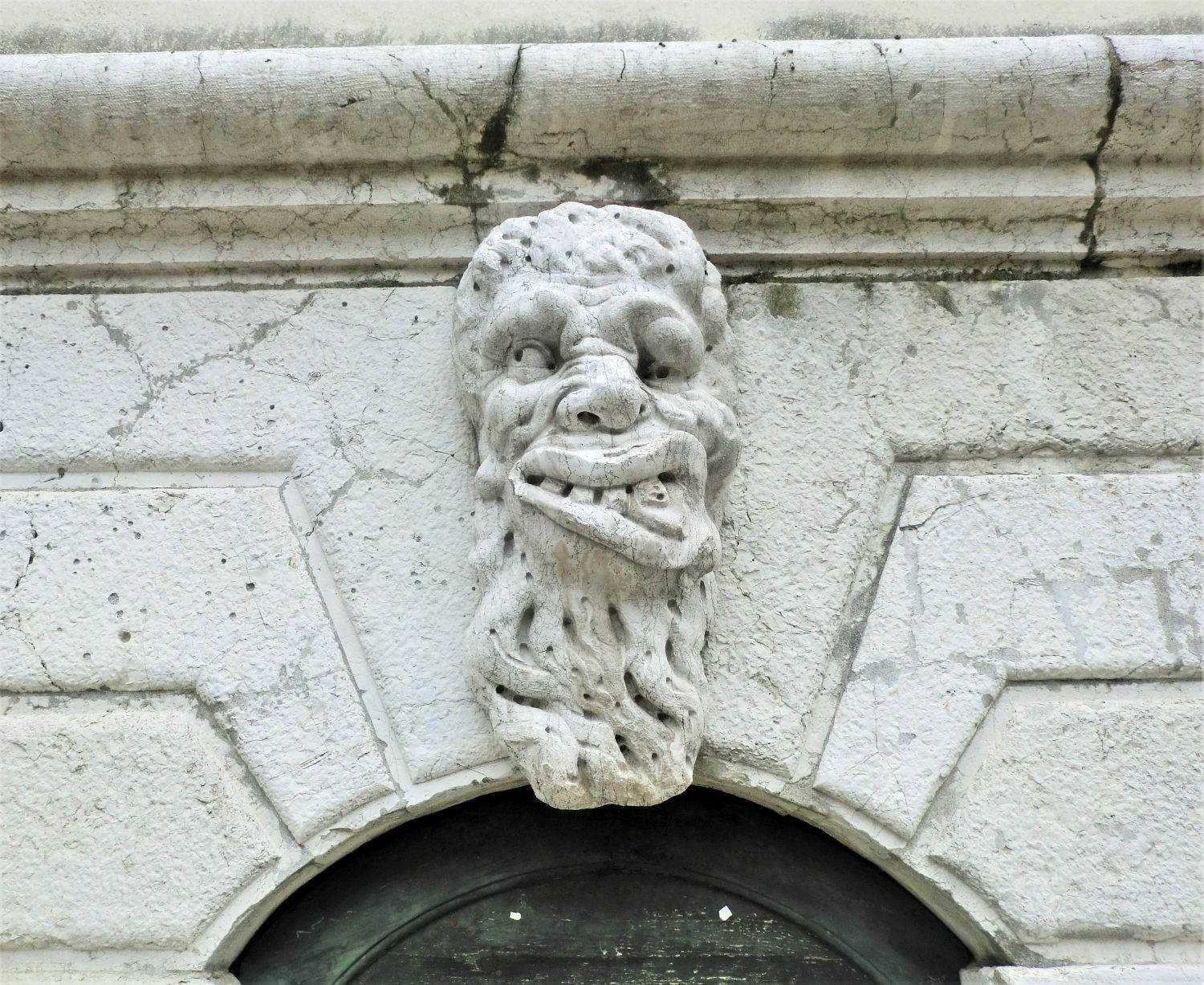