Let's go together to taste the delicious Carnival goodies: the famous frittelle

The Venetian frittelle are the typical goodies you can taste in our city during the Carnival. Actually, right after Epiphany you can smell fried frittelle in the Venetian calli and campielli.
How can anyone resist the temptation of entering a pastry shop and trying these hyper caloric goodies, along with galani and castagnole, the other Carnival specialties? It is not possible at all! But what are these famous frittelle?

Frittella is a sort of fried pastry. It can also be baked, instead of being fried, but this second version is not popular at all. If we have to be accused of gluttony, it is worth to sin properly! It can be filled with liquor cream, custard,ricotta cheese, chocolate, raisins... It contains lots of fats, and this makes it particularly delicious. It was meant to give great satisfaction right before Lent, during which good Christians were supposed to fast.

If it is true that today you can find frittelle almost everywhere in Italy, it is also true that the Venetian version is possibly the oldest one. It was the typical pastry of the Most Serene Republic starting from ancient times (even Marco Polo was fond of it).

The most ancient recipe, anyhow, dates back to the 14th century: written by an anonymous chef, it can be found in a recipe book today preserved at the Casanatese Library in Rome. Another document referring to frittelle, dating back to the 16th century, can be found in the archives of the Correr Museum. However, it was probably Bartolomeo Sappi, the private chef of Pope Pius VI, who invented the frittella. In his cook book "Opera" he gave the recipe of the Venetian frittella. 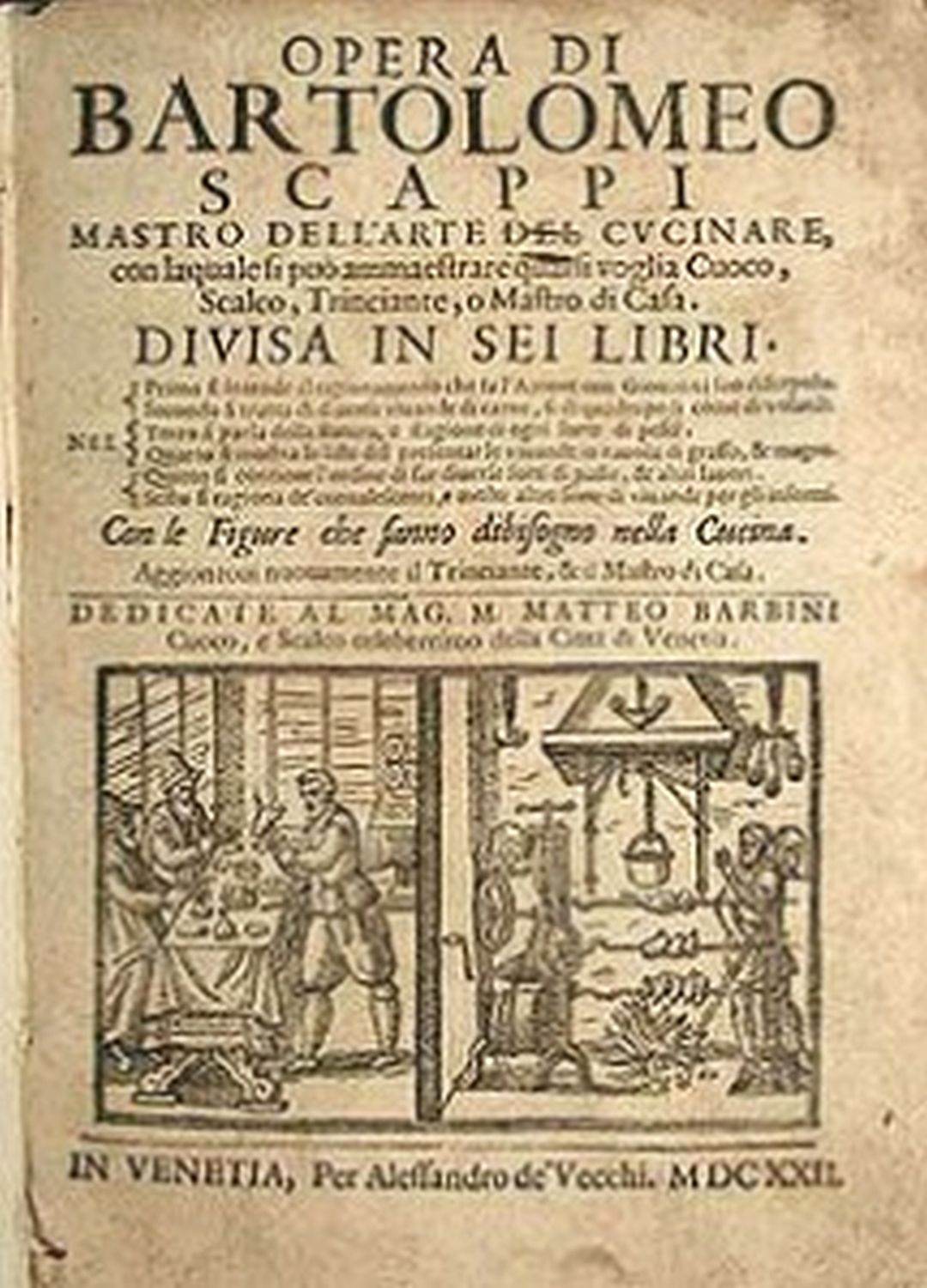 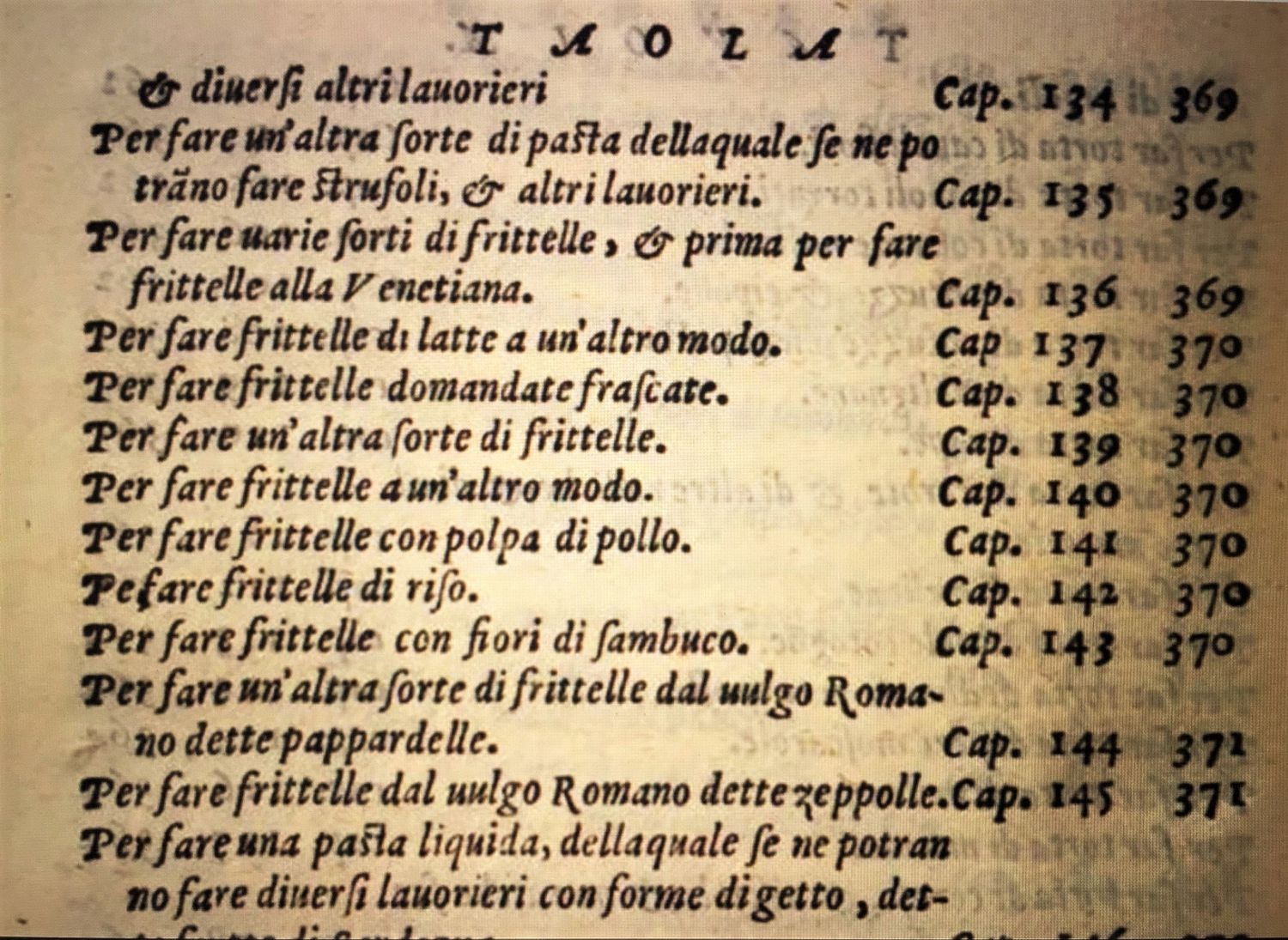 As for all the jobs in Venice, also the frittelle vendors were organized in a particular "guild", the guild of the fritoleri, the first one in the world that had theexclusive right of frying and selling these pastries, which were appreciated both by the poor and by the rich. Frittelle would be prepared and fried directly on the streets. Still hot, they would be sprinkled with powdered sugar and placed on large pewter dishes, served with raisins, candied fruits and pine nuts of the finest quality. Anyone would crave for such goodies during the Carnival! According to the law, fritoleri could rome freely in the city to sell frittelle, but they were forbidden to yell loudly to attract their clients. There were about 70 of them, and they were allowed to hand down their job and knowledge to their children. This guild remained active for a long time even after the fall of the Venetian Republic and disappeared only at the end of the 19th century. 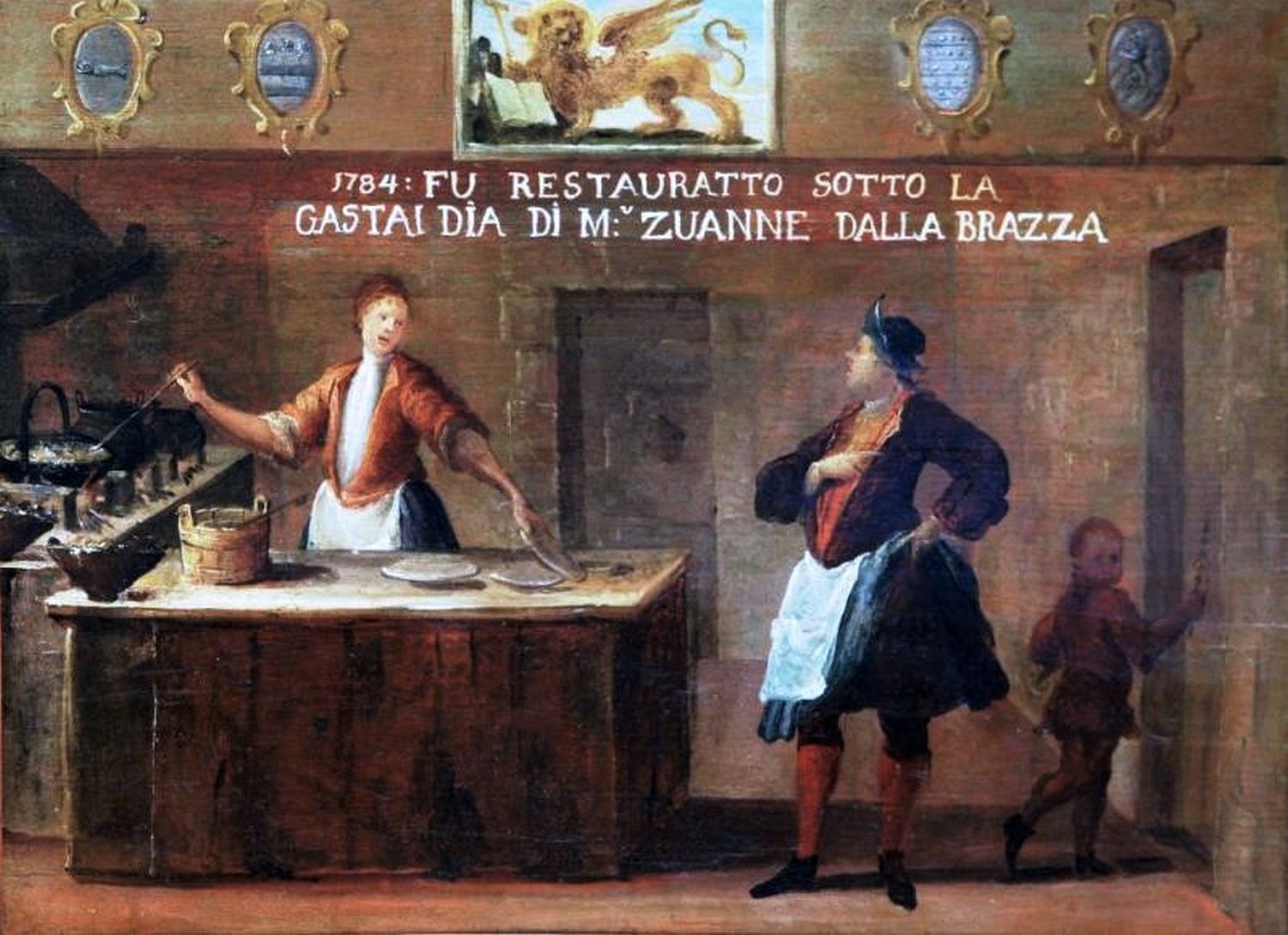 Frittelle can also be found in art and literature. In his famous play Il Campiello, written in 1756, the Venetian playwright Carlo Goldoni introduced an interesting character, Orsola, who prepares and sells frittelle to the Knight. Later on, in 1936, the composer Ermanno Wolf Ferrari wrote an opera based on Il Campiello.

One of the best representations of a lady selling frittelle can be found in the lovely painting by Pietro Longhi, now preserved in Ca' Rezzonico. 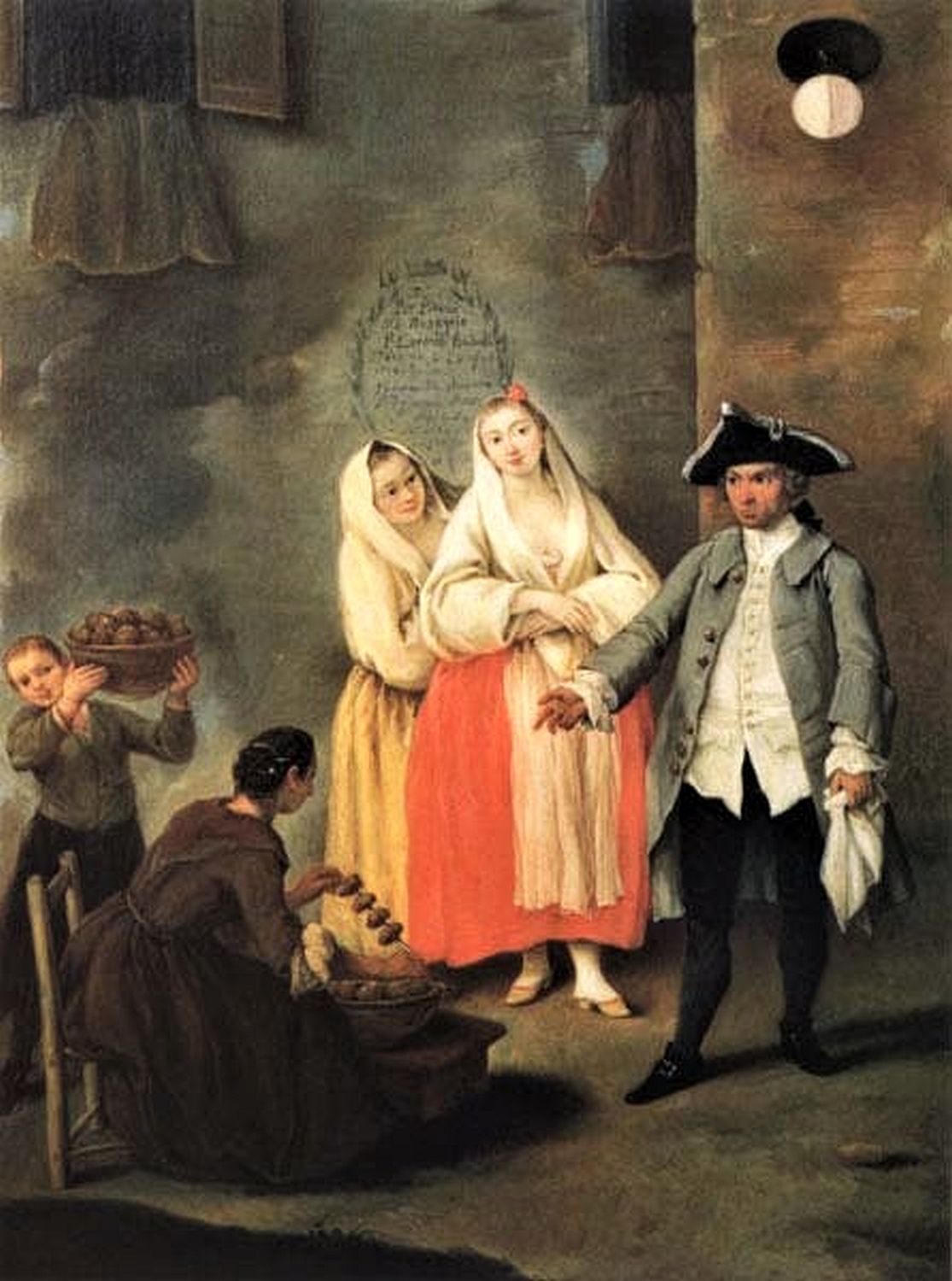 The frittelle vendor by Pietro Longhi

Even the 20th century Italian decadent poet Gabriele D'Annunzio celebrated frittelle in some lines that he dedicated to the old, crazy Venetian Carnival.

In Venice during the Carnival you can also taste other hyper caloric fried sweet specialties, galani and castagnole, appreciated by the locals as much as frittelle. 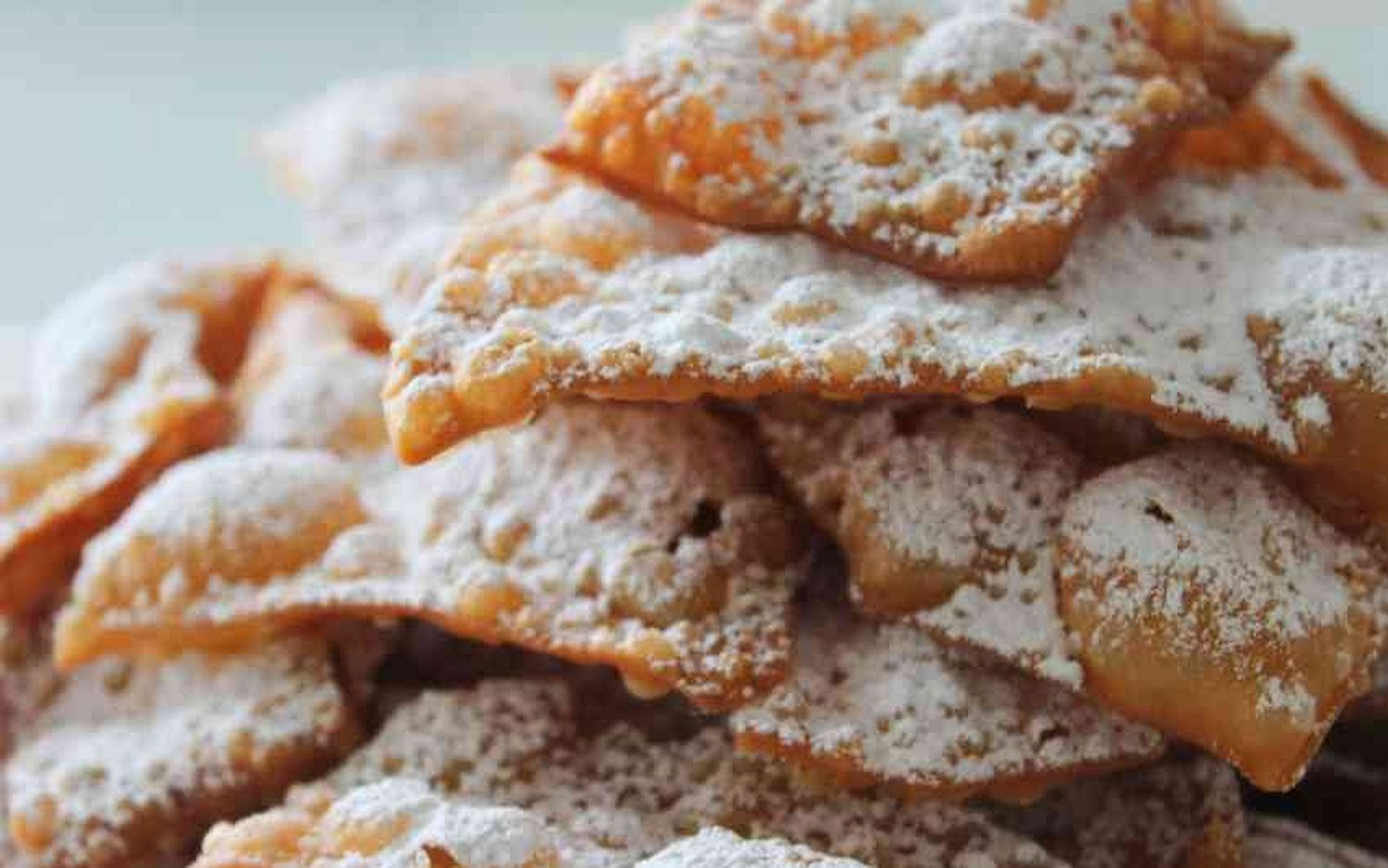 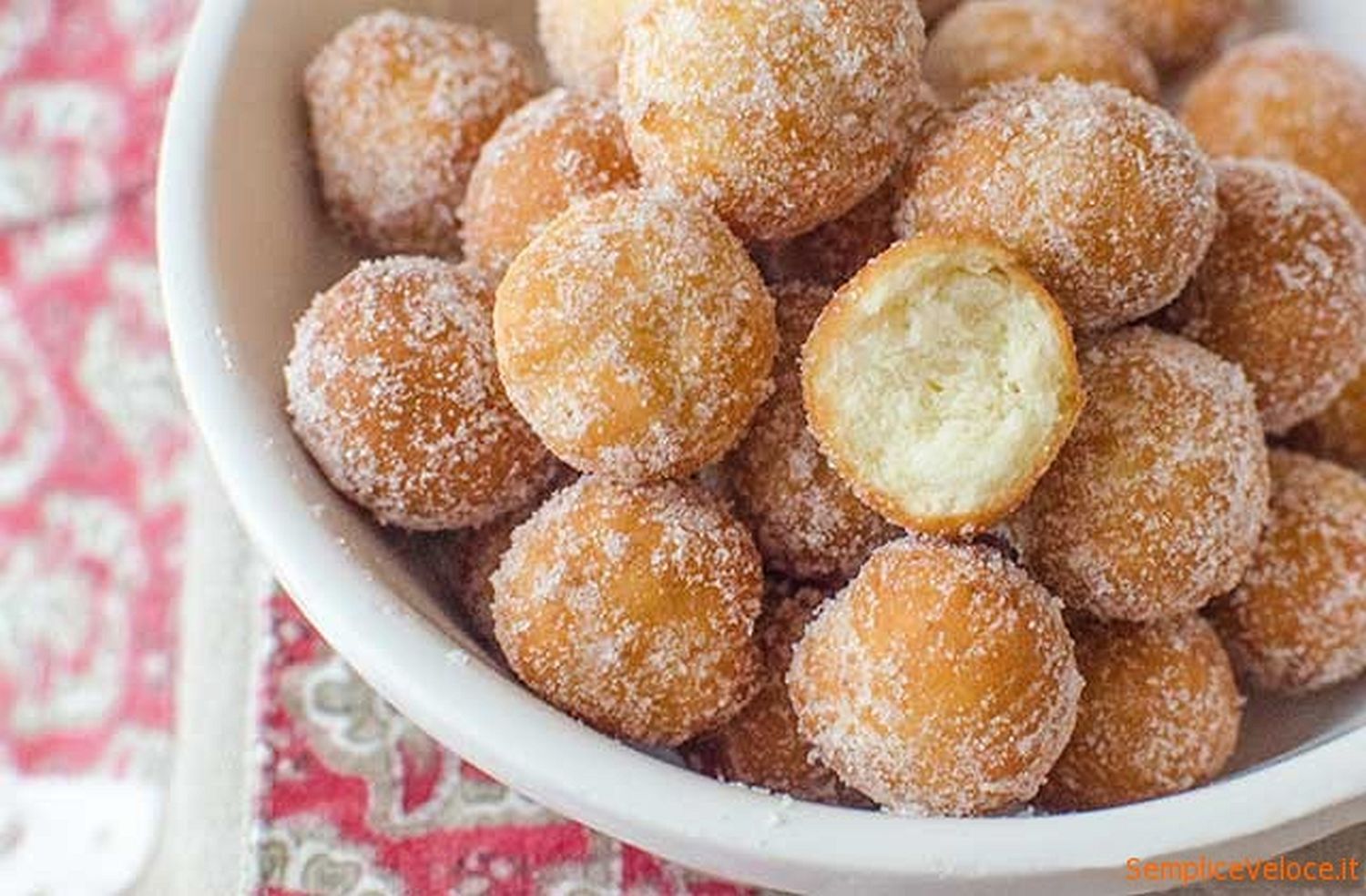 How do we prepare the typical Venetian frittelle? And who knows the real recipes of castagnole and galani? Well, you can try to find it out in internet... We will try instead to grab the secret from some renowned pastry chef in order to unveil it for you. Do not miss our next post, then! In the meantime, we will go and search for secrets...