Lorenzo Quinn's Hands in Venice: a perfect combination between tradition and modernity

A stunning sculpture along the Grand Canal

The pictures of the giant hands supporting palazzo Morosini Sagredo, better known as Ca' Sagredo, a luxury hotel along the Grand Canal, have already become famous all over the world. At the inauguration of the 57th Venice Biennale on May 13, the artist Lorenzo Quinn with his work of art has gone beyond any expectations.
Two giant hands come out from the water and seem to support the façade of Ca' Sagredo. ‘Support’ is in fact the title of this enormous sculpture, which seems to hold up the entire building. 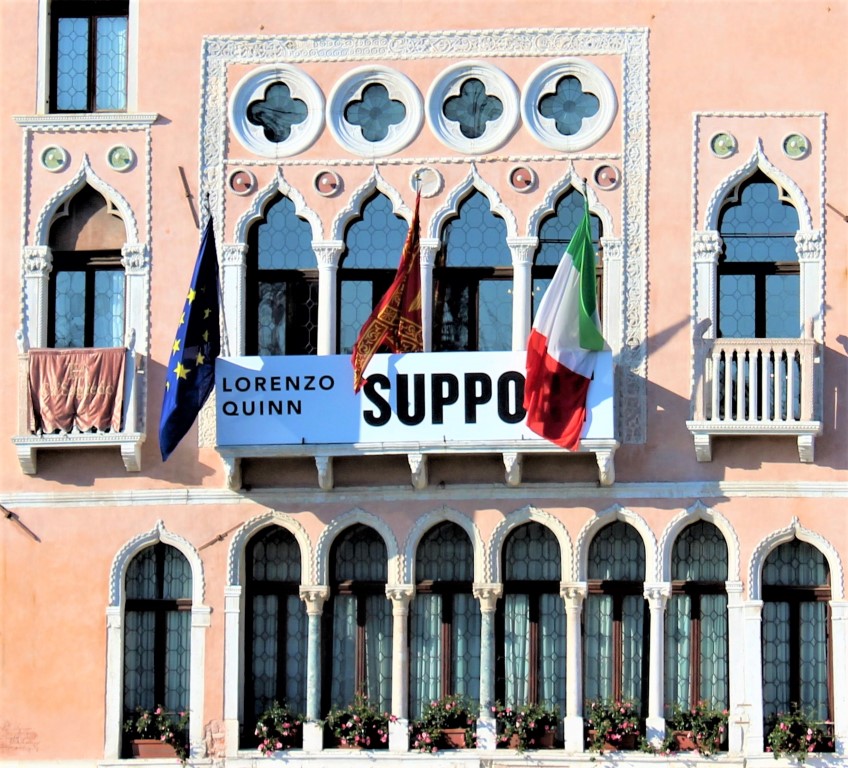 The three of us have been following for years the extraordinary works by this artist, who not only surprises, but also sends a clear message to all those who admire his works of art. This time, with the stateliness of his sculpture, he has taken everyone by surprise, out of the blue. Clamor, incredulity, amazement, indignation, sometimes even rejection of this work of art, negative criticism, admiration, beauty, pure geniality: the entire world is talking about it. 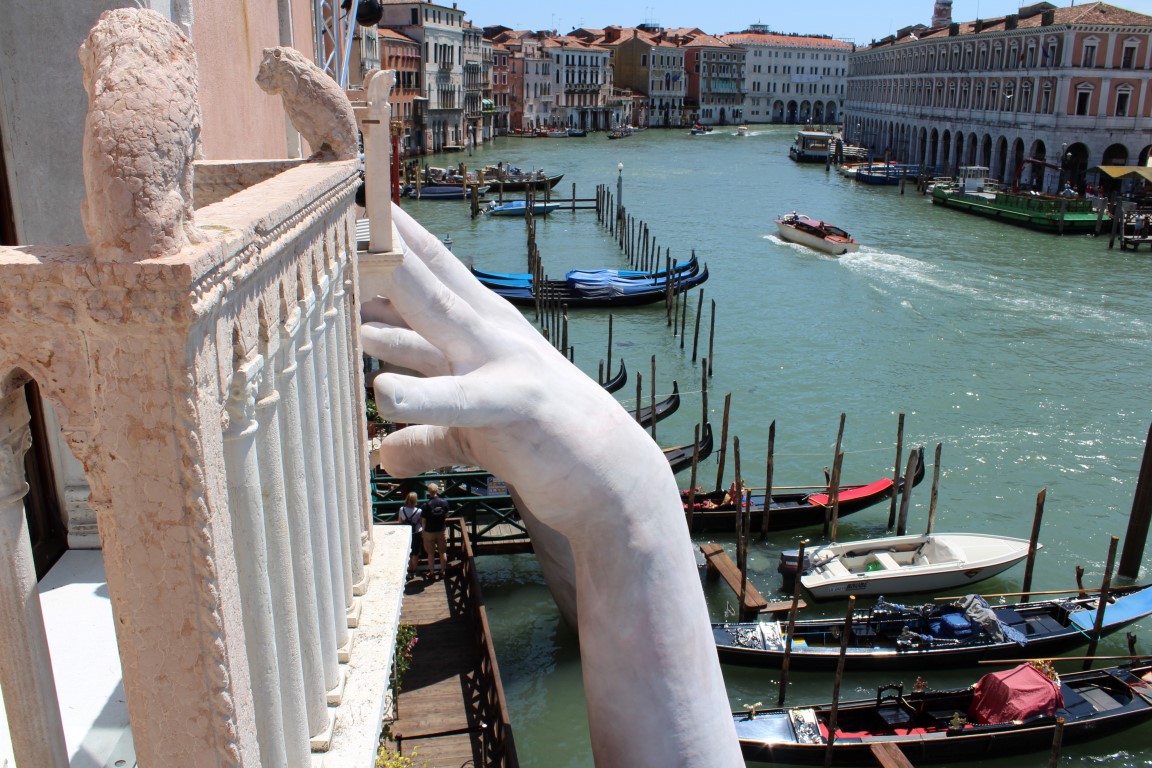 The idea of this sculpture arouse last year when Lorenzo Quinn was celebrating his 50th birthday in Venice, at Ca' Sagredo: talking to the director of the hotel, Ms Lorenza Lain, he expressed the desire to create a majestic installation which could represent the fragility of Venice. 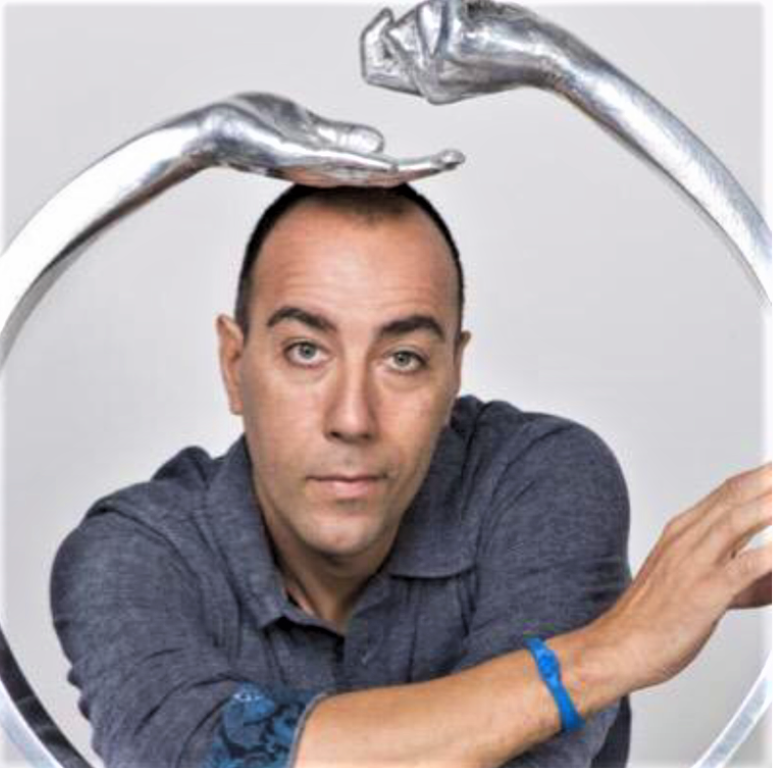 Hands, as Lorenzo states, have the power to love and hate, to create and destroy: it depends on human beings, how to use them. The destiny that the artist has chosen for his hands is a destiny of love for our city. But why Venice? Lorenzo Quinn definitely loves this city, so unique with beauty, so rich of works of art: in the middle of the Lagoon, Venice is dangerously threatened by climate changes and decay, by the carelessness of humans, who with their hands can save it or destroy it. 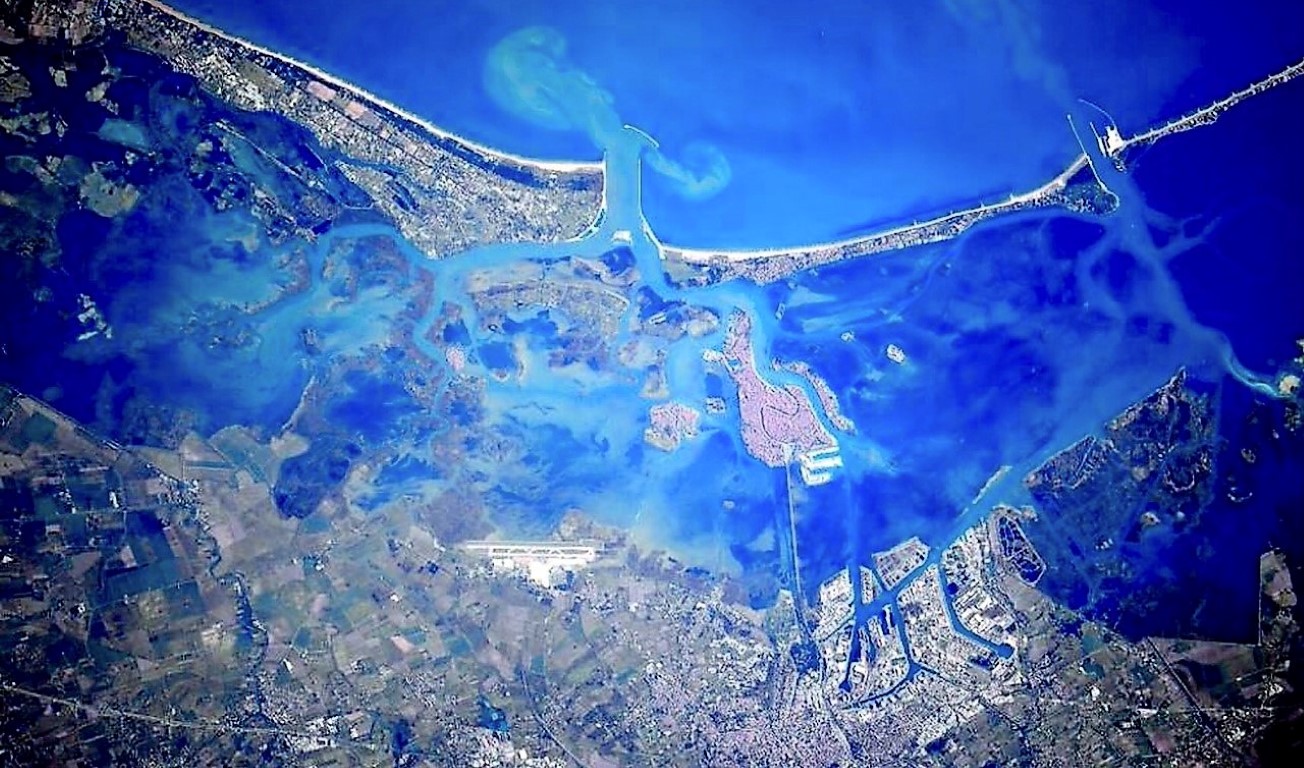 Venice and its lagoon

As a model for these gigantic hands Quinn used his son Anthony's hands, thus entrusting them with an even more intimate significance.

Thanks to the use of modern materials, which the artist is always in search for and which he continuously tests in different ways, these hands have been transformed into the symbol of the salvation of Venice. Despite the innovative material, it is quite evident that this sculpture reminds of the classical monumentality of Michelangelo's works. Lorenzo Quinn in fact gets great inspiration especially from Rodin, Bernini, and above all Michelangelo Buonarroti: so relevant is his admiration for the famous Renaissance sculptor, that in 2011 Lorenzo personally visited the Carrara caves in order to choose a piece of marble for one of his sculptures, exactly like Michelangelo used to do. 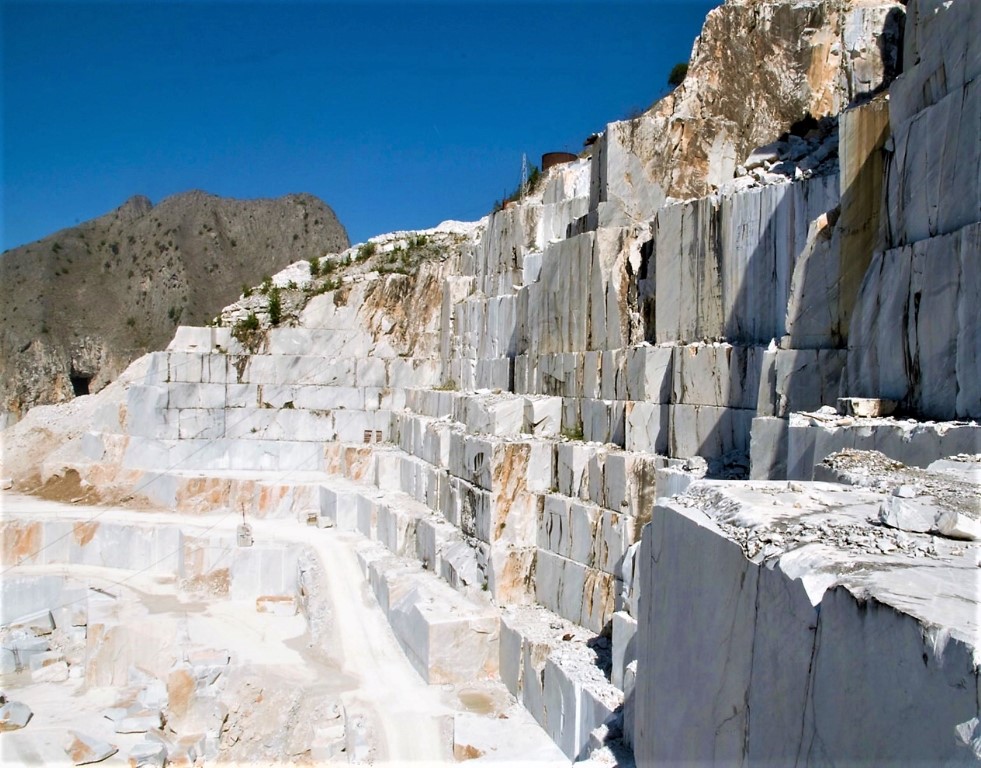 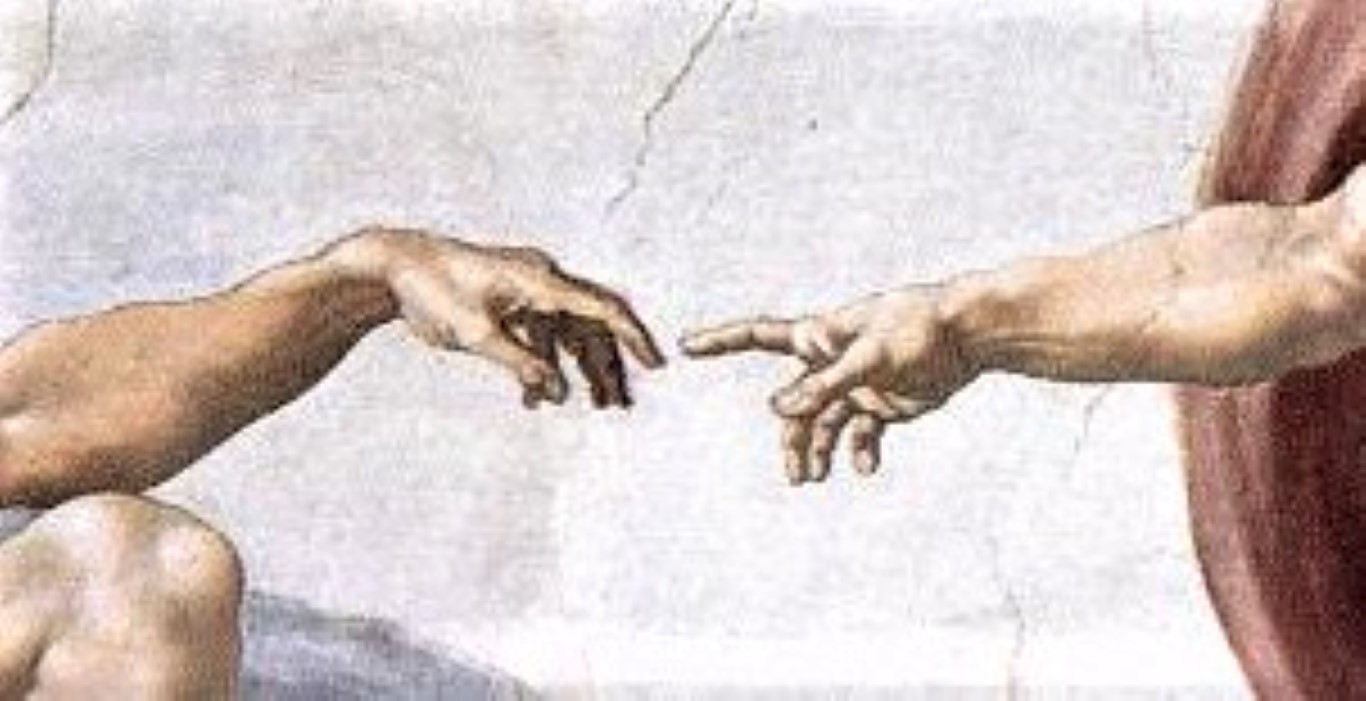 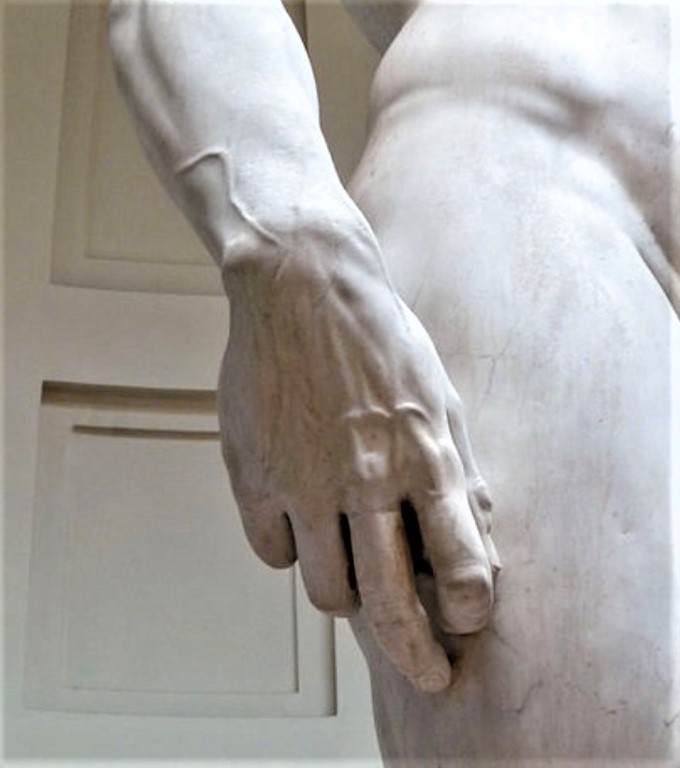 The originality of Lorenzo Quinn's sculpture consists also in its dimensions: these hands are so monumental, that the viewer immediately perceives how fragile Venice is. The message has to reach out to the entire world, and it has to be immediately understandable. Lorenzo has definitely succeeded in his purpose. 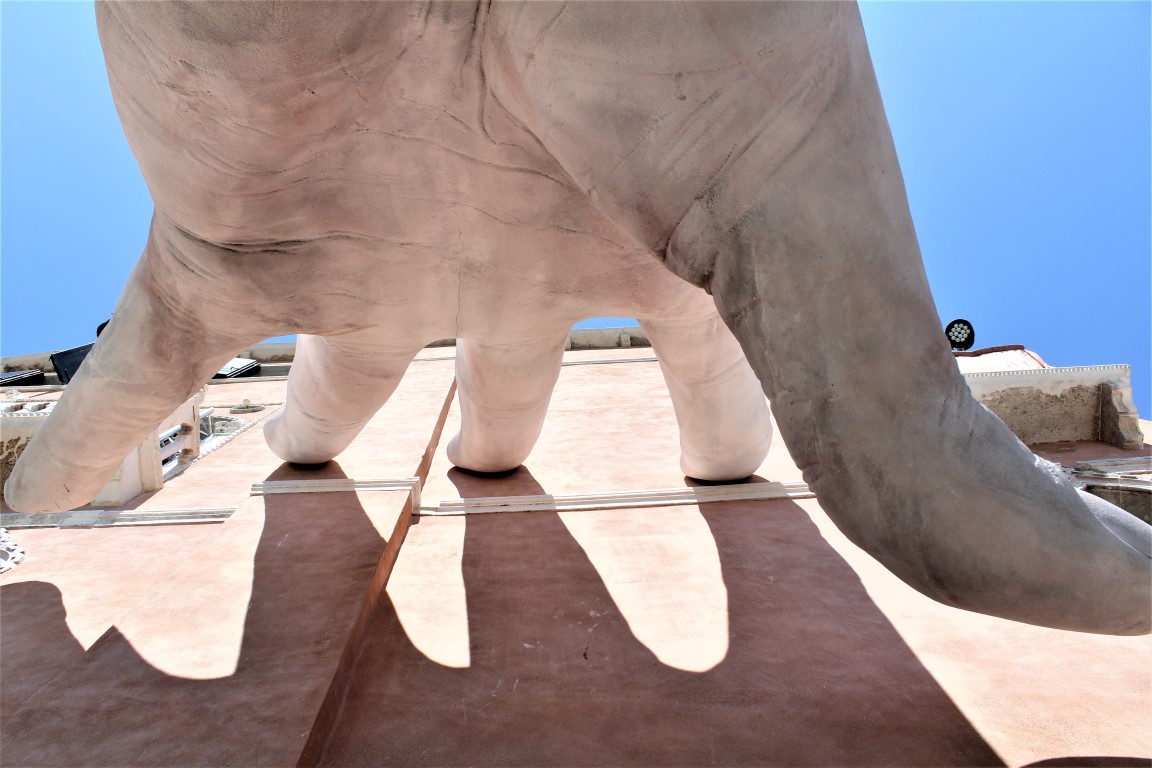 ‘Support’, from under one of the two huge hands, detail

Support is the symbol of the beauty and of the fragility of Venice at the same time. Thanks to the fact that its significance can be easily understood, this sculpture then goes beyond the borders of the Venetian Lagoon: it definitely suggests that we should save Universal Beauty, taking care of all the cities that are full of art works, and in general of our planet and of Mother Nature (which is absolutely the best work of art in the world). If we save our planet, we save also all the artistic treasures of our cities.

Quinn's Hands are about 9 meters (29 ft) high, each of them weighs roughly 2.500 kilograms (5.511 lb), they both rest on four pillars that are inserted ten meters (32 ft) under the canal; they contain a metal structure inside, which grants stability and anchorage. 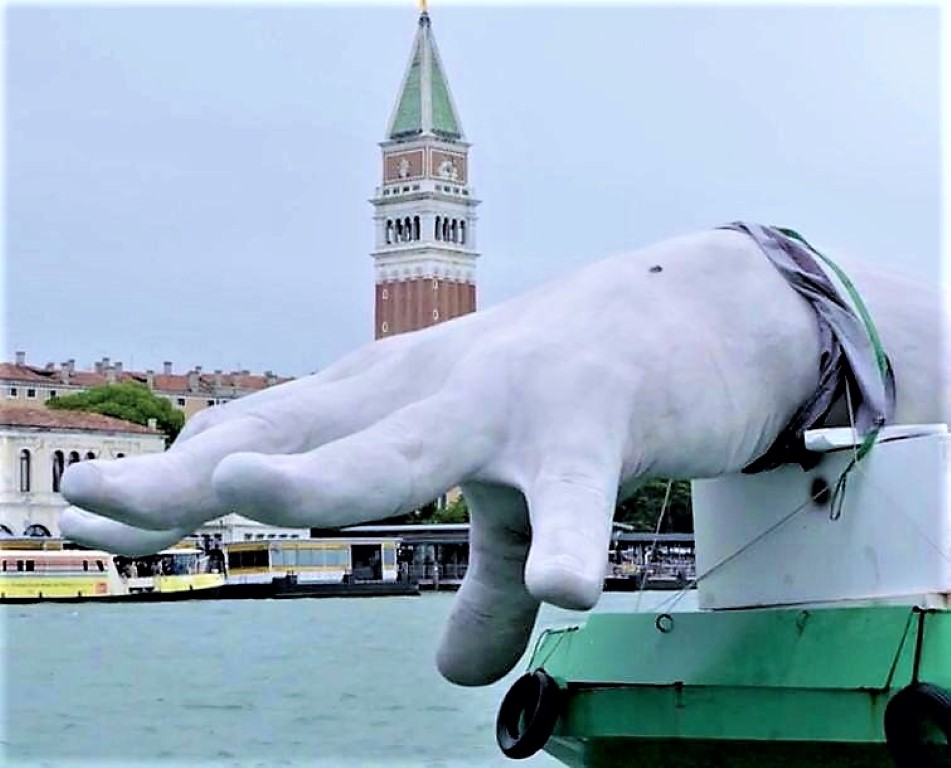 We really feel this is a major work of art, we have literally fallen in love with it, we are seized by its grandeur. Every time we float on a motor boat along the Grand Canal and we pass by Ca' Sagredo, our emotion is always strong, as if we were looking at those hands for the first time. 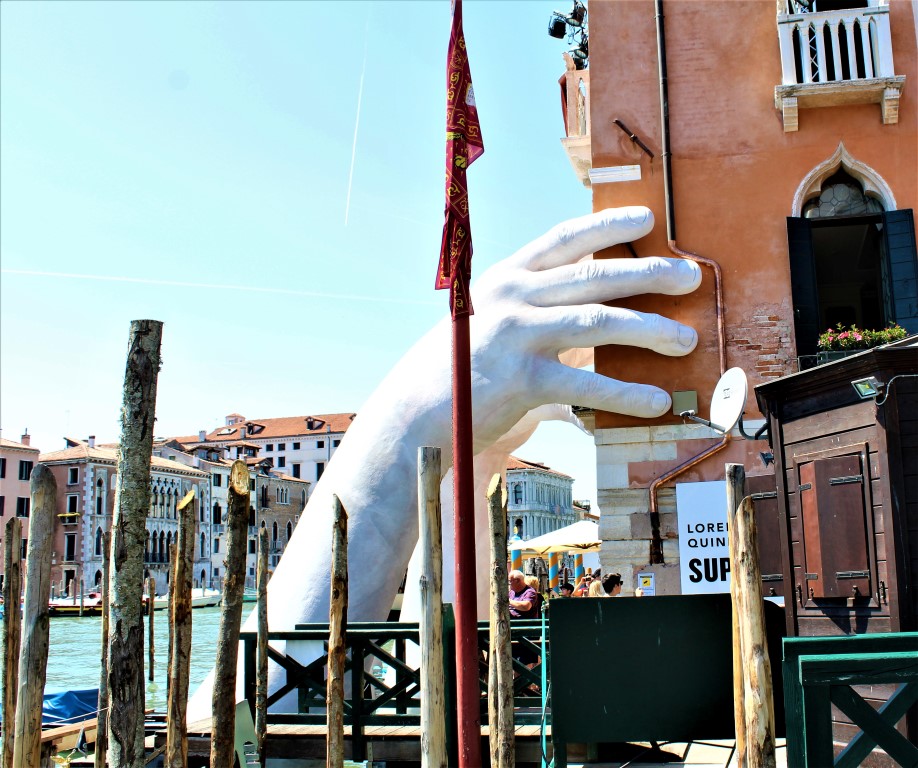 The sun is setting now.. We would like to invite you to come and visit Venice during the Biennale, in order not to miss this extraordinary work of art... Waiting for you, we take leave with our favorite pic: Support by Night. 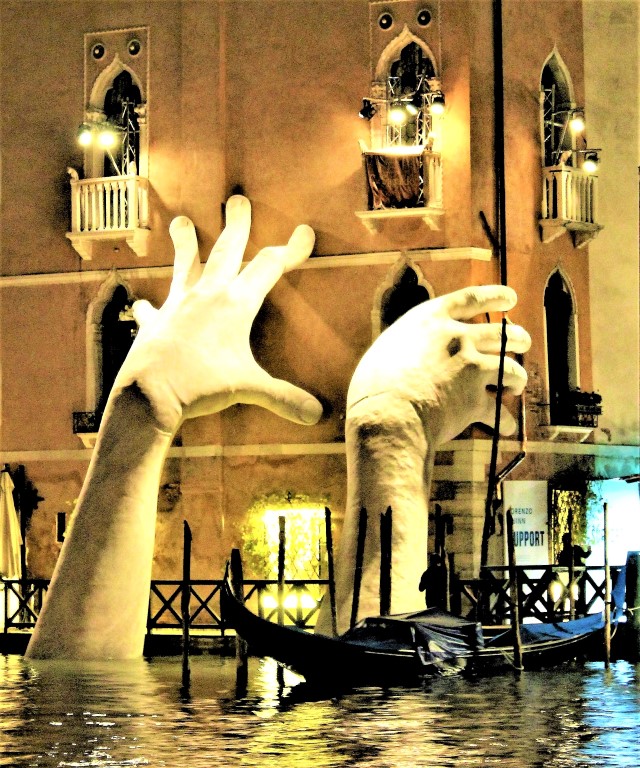