The last painting by the great Renaissance painter... On August 27th, 1576, Titian, one of the greatest painters of the Venetian Renaissance, died. He was born in a small village, Pieve di Cadore, in the Dolomites, but he moved to Venice at a very young age to work as an apprentice in Bellini’s workshop. He then became one of the best known painters of his times: he received commissions even from the emperors Charles V and Philip II. He was a member of an exclusive literary society, together with the writer Pietro Aretino, the architect and sculptor Jacopo Sansovino and the Queen of Cyprus Caterina Corner.
At the Accademia Galleries we can admire his very last masterpiece, The Pietà (i.e. The Lamentation over the Dead Body of Christ).

After the victory against the Ottomans in the famous Battle of Lepanto of 1571, the Venetian Republic witnessed a revival of national pride and power: the eternal enemy had been beaten. 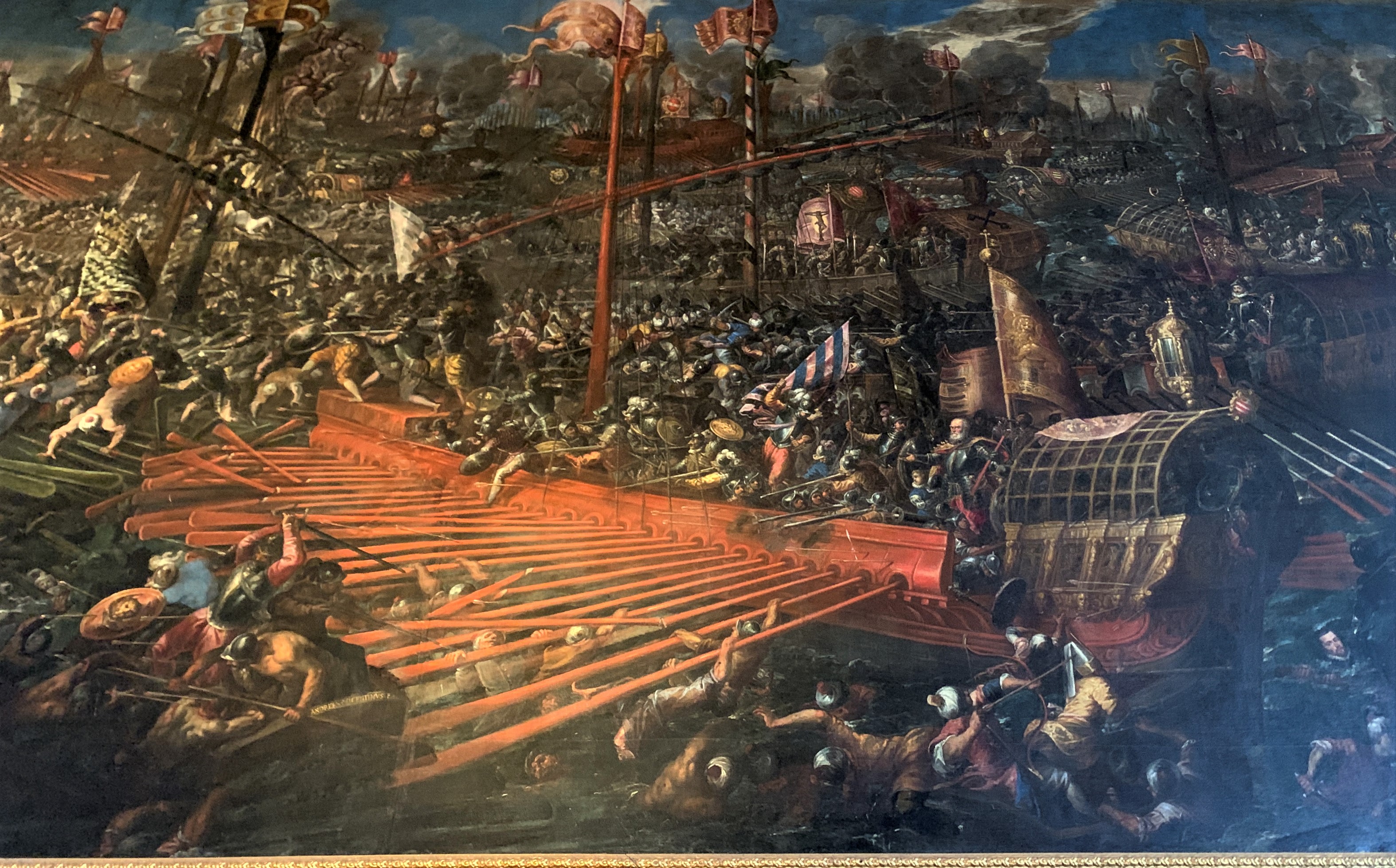 Sebastiano Venier, the Admiral of the Venetian Navy, had bravely faced the ships of the Turkish Empire; this extraordinary event recalled to mind the heroic deeds of Doge Enrico Dandolo during the Fourth Crusade of 1204.
Unfortunately, in 1575 a terrible epidemic of plague hit the city: probably, at the beginning it was underestimated, and as a consequence roughly 50,000 people died, that is one third of the population of Venice in those days!
During the epidemic also Titian died, in late August 1576.

The Pietà is the very last masterpiece by Titian. The artist painted it for his own grave, that should have been built in the Frari Church. After several vicissitudes, in 1814 it found place at the Accademia Galleries. 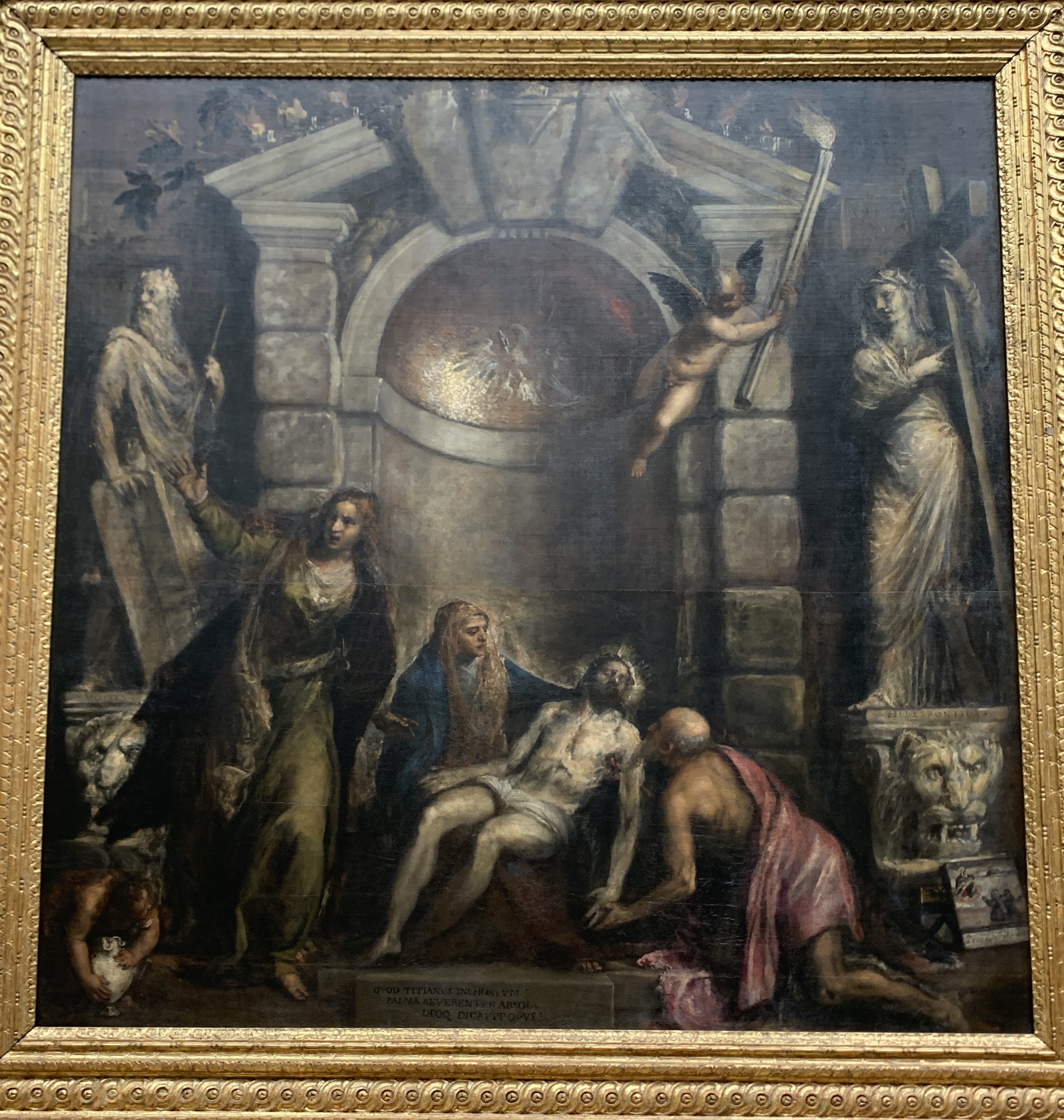 Christ’s body, on Mary’s lap, is quite impressive because of the pale, bloodless color of its flesh.
The news of Christ’s death is annunciated to the entire world by Mary Magdalene, and with her raised arm she expands the scene; the terrible message, then, becomes infinite. 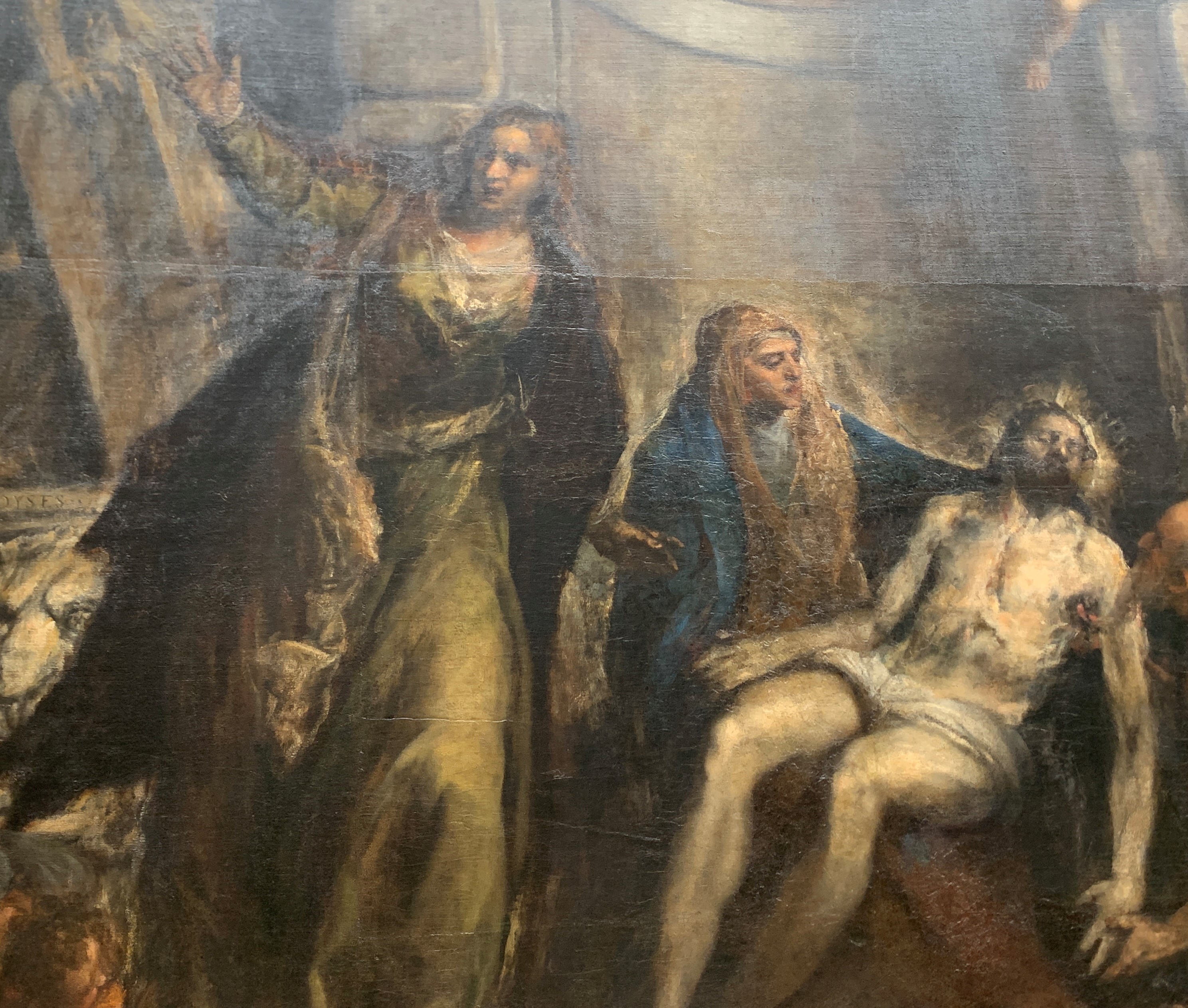 Who’s the man wearing a red robe, who kneels down and touches Christ’s hand?
It could be Nicodemus or Joseph of Arimathea… it is actually Titian himself, who portrayed himself as an old and weary bearded man, who is begging for Divine Salvation. 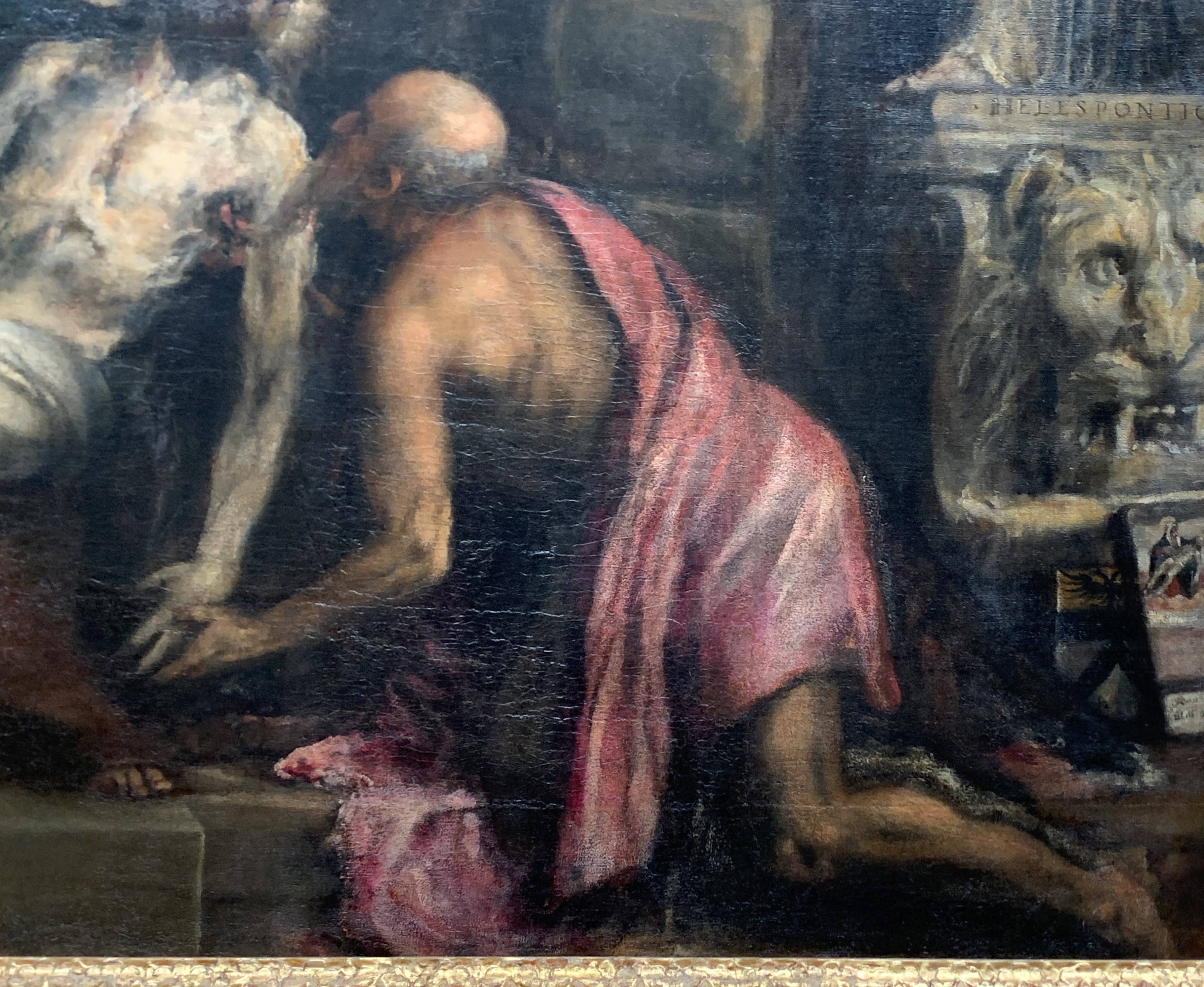 The scene takes place under an apse basin decorated with golden mosaics, and here Titian shows how he had been influenced by his master Giovanni Bellini, who in several paintings had paid homage to the shining mosaics of St. Mark’s Basilica.
At the center of the half dome we can admire a pelican, which with its beak tears its own chest to feed its little ones with its own blood: it stands for Christ’s sacrifice and for his Resurrection. 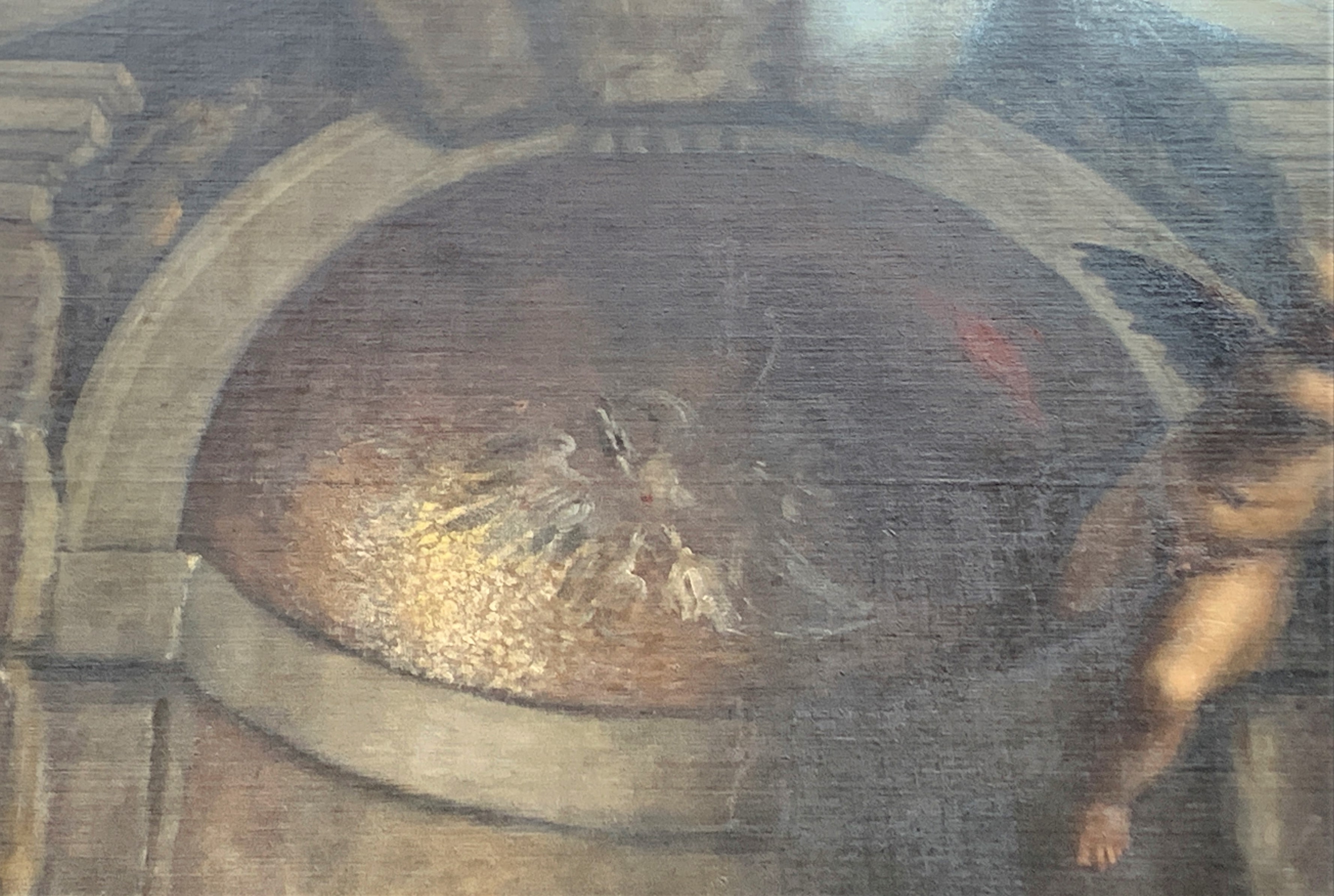 The statues of Moses and of the Ellespontic Sibyl at the sides represent sort of a theatrical backdrop within which the scene takes place. Both figures stand on bases decorated with a sculpted lion, the symbol of St. Mark and of Divine Wisdom.

A Painting within the Painting

On the lower right corner of the canvas the artist portrayed in a small painting himself and his son Orazio as they kneel down in front of another Pietà: Titan’s son died because of the plague one month before his father’s death. 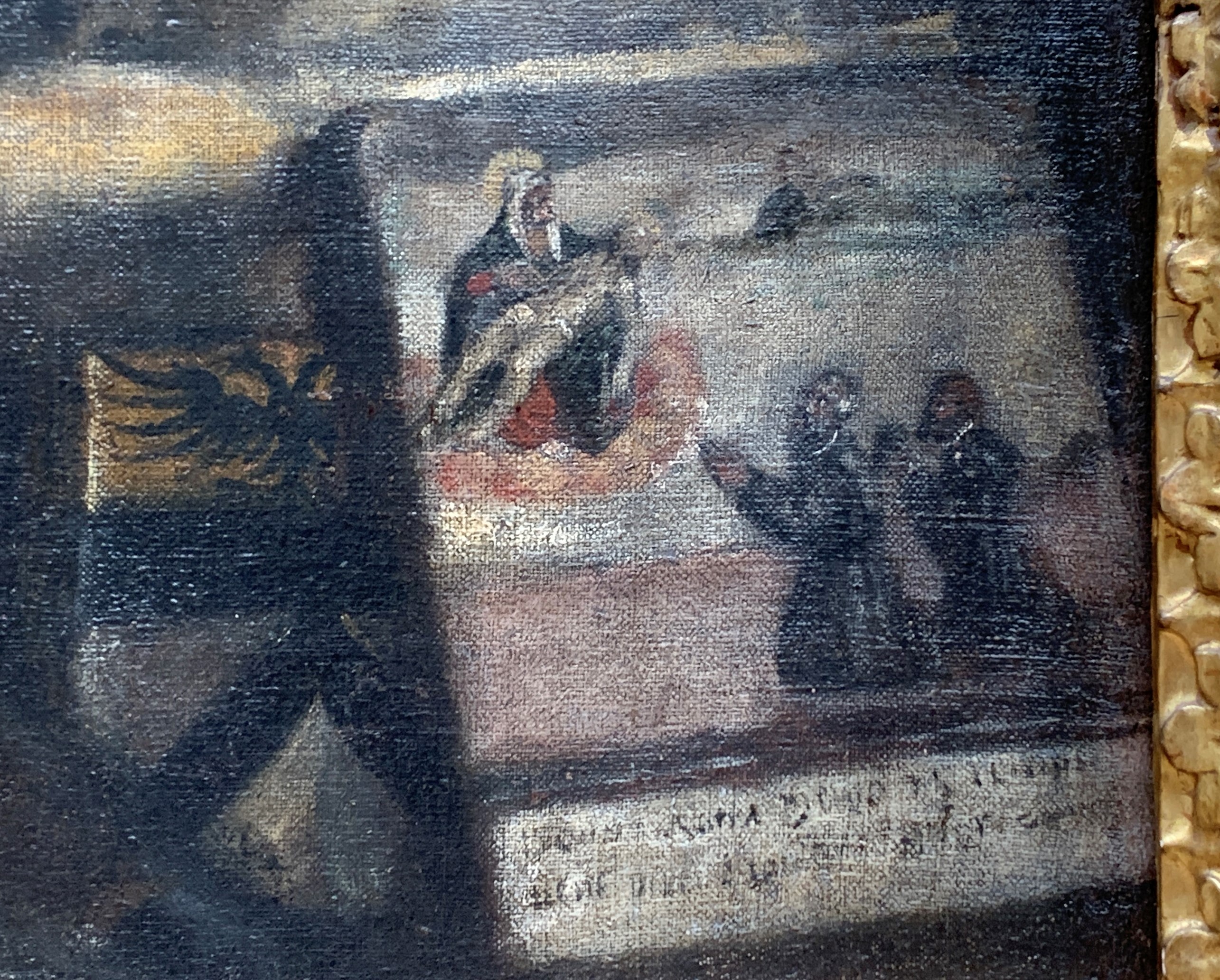 This small painting probably represents a prayer, a last desperate pleading for salvation.
This pleading seems to be stressed also by the hardly visible arm by the Sibyl’s base: it looks really disturbing, as if it was the symbol of the imminent death of both the man and the artist. 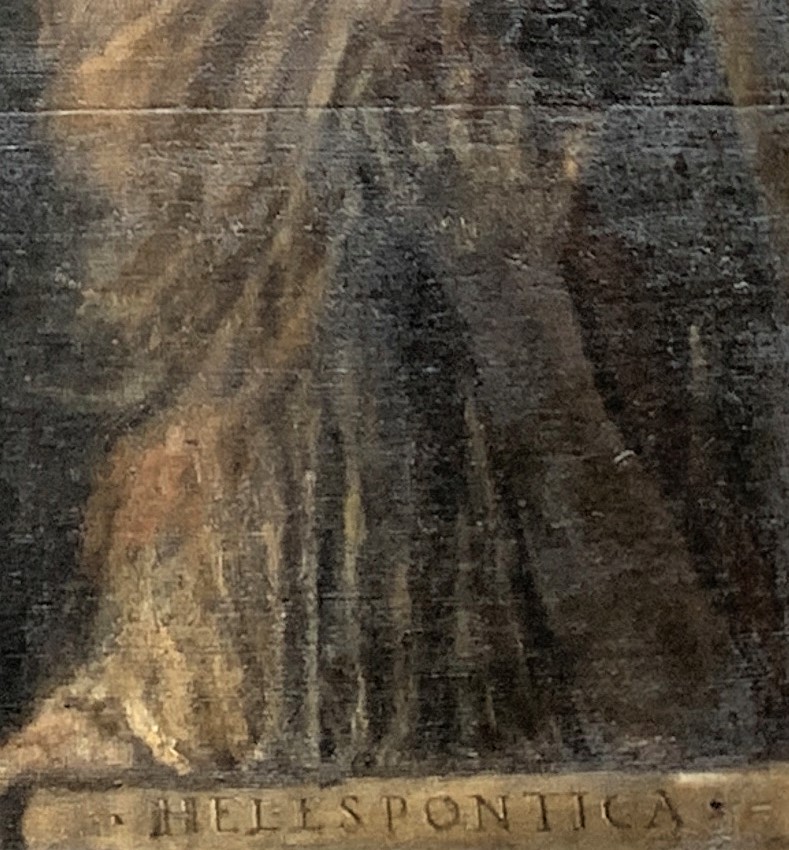 In his last works Titian definitely changes his chromatic palette.
In this Pietà the colors are quite dark; the brush strokes are quick, approximate, imprecise; substance seems to crumble. The trembling light stresses the dramatic event. The forms fade, the outlines become indefinite, the light is vibrant, the exact, perfect drawing has been abandoned in favour of expressive lines.
Tiziano Vecellio, the son of a notary, the knowledgable, refined, revolutionary artist who was contended by the greatest figures of his age, ended his career, as an artist and as a man, painting this very last canvas where the unfinished dominated the entire scene.
Did he mean to underline the human condition in front of Death?
This is one of the many questions that this painting seems to suggest. Another question could be: what do Moses and the Sybil stand for?
We will be waiting for you for a guided tour at the Accademia Galleries, to unveil the symbolism in Titian’s last masterpiece.
Ciao!
Contacts: info@guidedtoursinvenice.com

Venice and the plague  (section: Specific tours of Venice)

The charm of Dorsoduro  (section: Live virtual tours of Venice)

Venice and our guided tours of the Accademia Galleries: Paolo Veronese   (section: Blog)

Titian's mountains in his paintings in Venice   (section: Blog)