The merchant used to sell his goods in the portego, the largest room in his palazzo, a room full of light, the most suitable for displaying luxury merchandise of high quality. Among the goods that distinguished Venice in the European market a relevant place was occupied by cloth of different sorts, imported from the East or from the North and also woven in town by skilful artisans.
We can try to imagine the portego of a merchant of cloths of the past centuries: fabrics on the tables, in the closets, on the armchairs... Rolls of cloth, samples, objects produced using the same fabrics displayed in the room, in a swirl of colors. How fascinating would it be to step back in the past, to enter a Venetian palazzo along the Grand Canal, to be surrounded by such an atmosphere...

Impossible? Not at all! Not in a magical city like Venice. Similar places still exist, unique places, where you get the impression that time has actually stopped. Today we would like to lead you on tiptoe into a palazzo of the 15th century, built in Codussi's style, along the Grand Canal: Palazzo Corner Spinelli at Sant'Angelo. 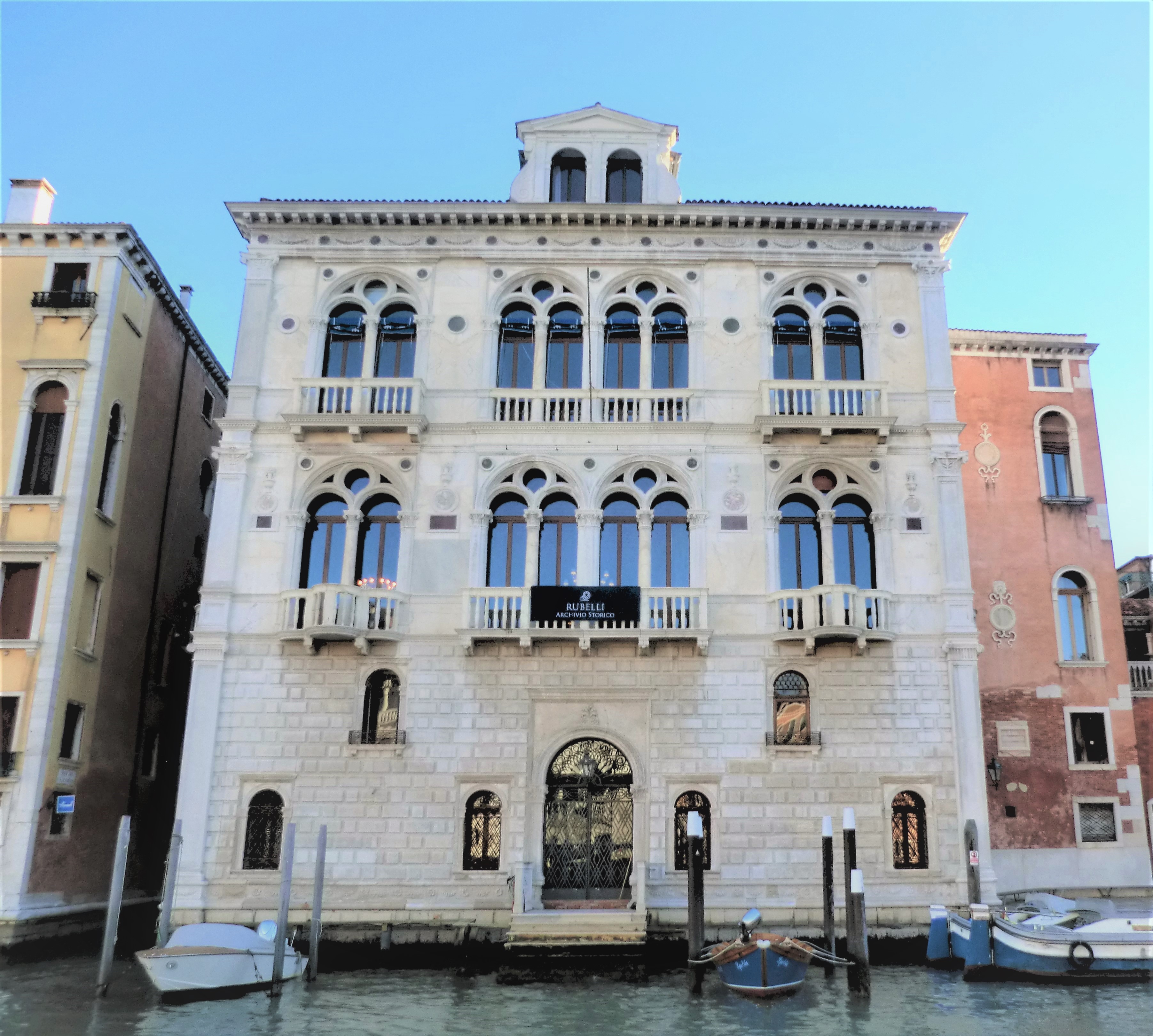 On the first noble floor (which is actually the second floor) of this house we find the Venetian Headquarters of the Rubelli textile manufacturing, which has been producing high quality fabrics since 1889. As we cross the threshold, we enter a luminous portego, with large windows both on the Grand Canal and on the back. 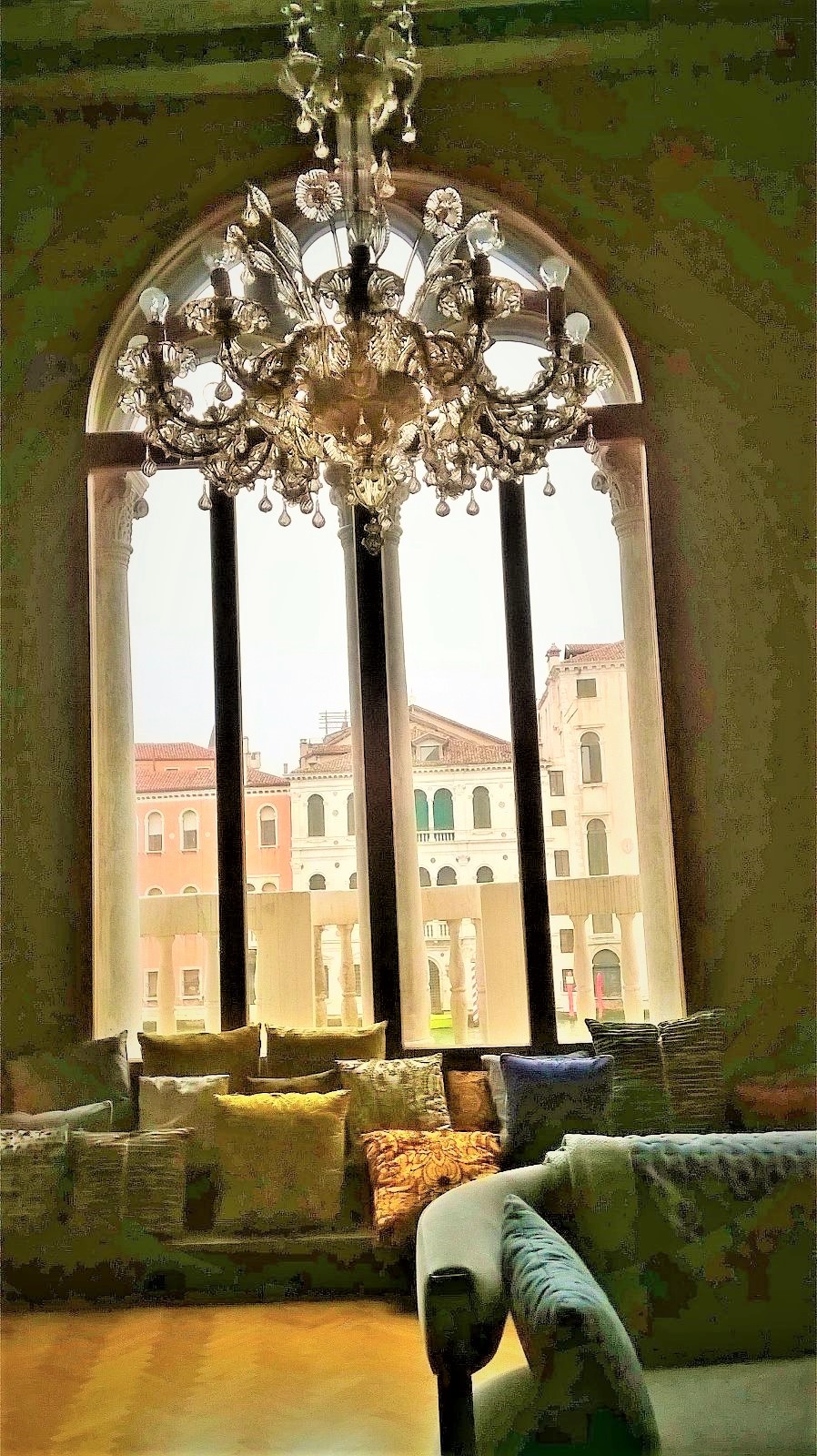 Windows on the Grand Canal

It is exactly as we had imagined it: cloths piled up on the tables and on the furniture in general, oddments of different length here and there, along with samples of fabrics displayed instead neatly in proper cabinets. 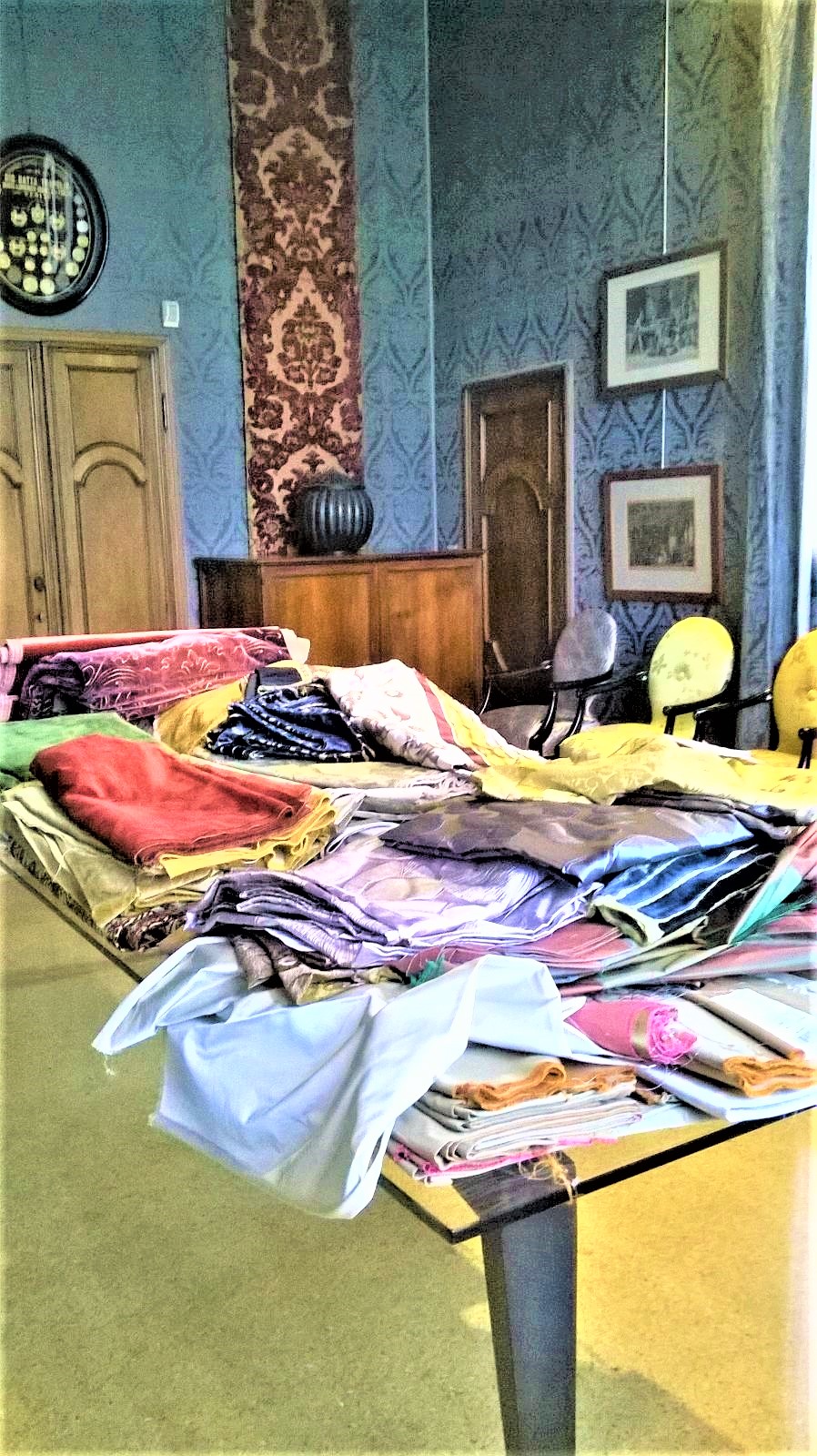 And the variety: fabrics of different colorful shades, pale or bright, dyed or painted, plain or textured, antique in aspect but classical or even modern in taste.
You can also notice beauty cases, pillows and other items handcrafted with Rubelli cloth, elegantly displaced more or less everywhere in the room. From the ceiling elegant original Murano glass chandeliers hang, to cast even better light on the goods. 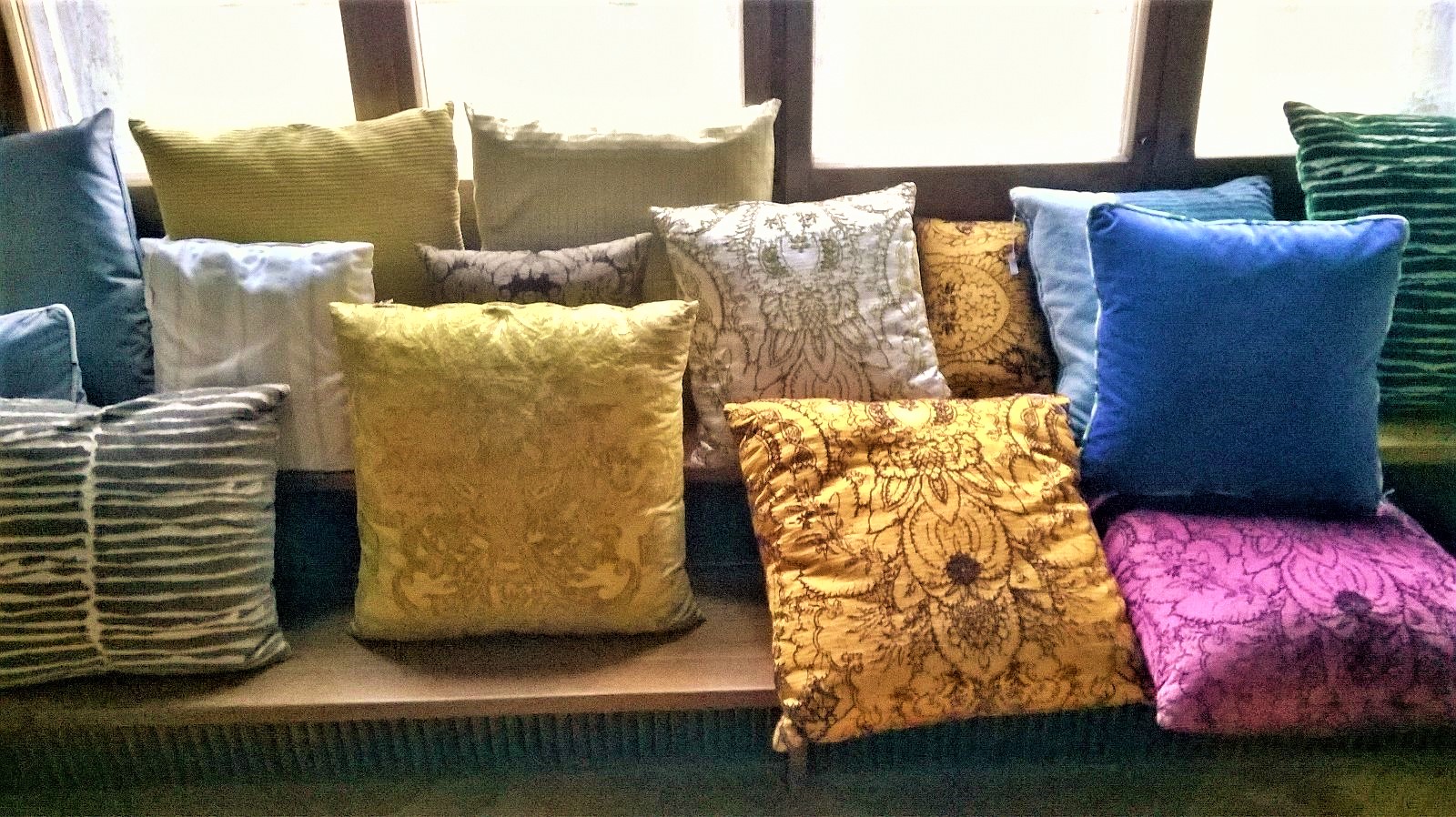 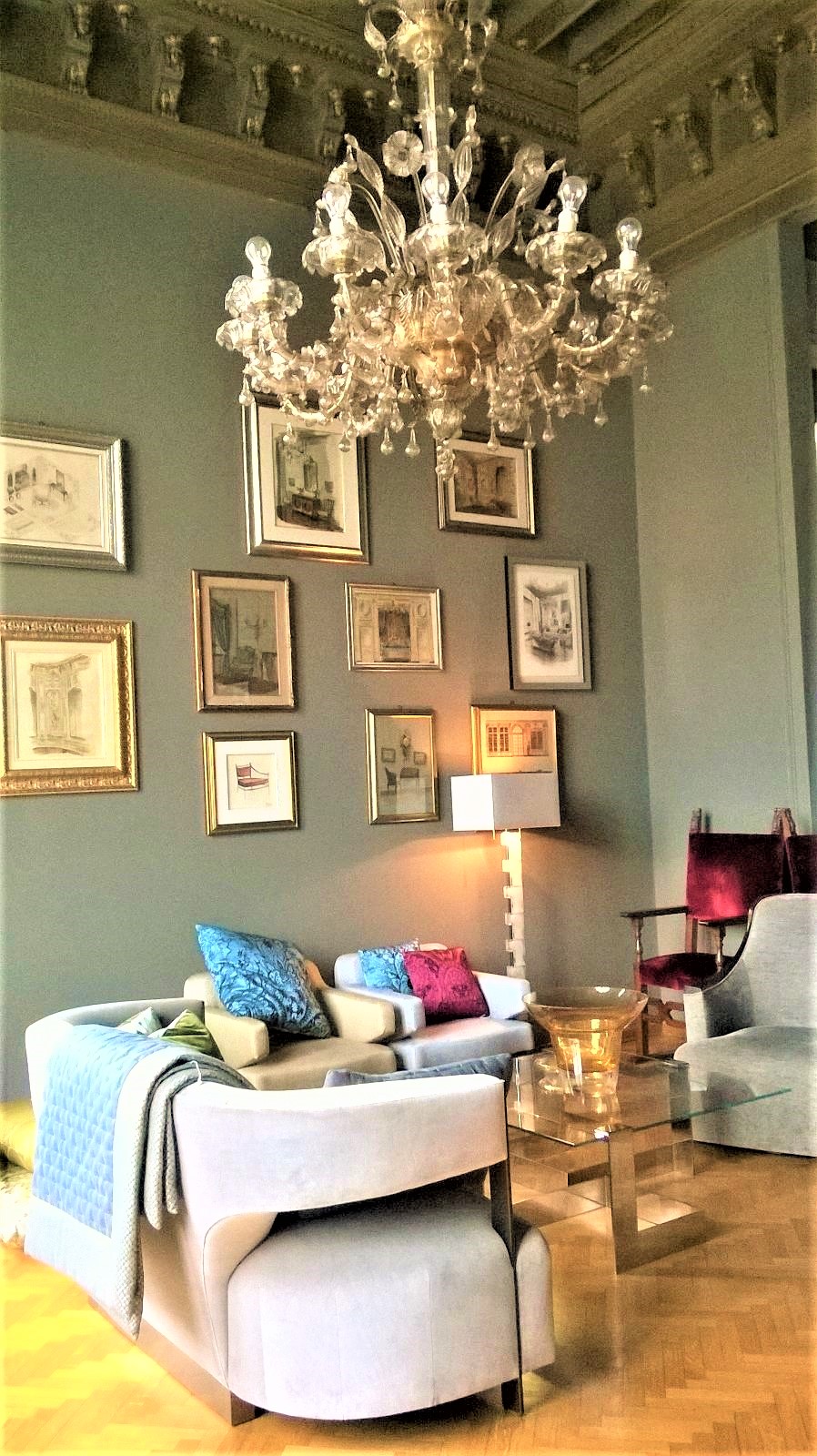 The portego once was the most lively area of the palazzo, where business was made. At the sides several other rooms open up: some of them were definitely used as offices, as they are today, whereas some others were used as living quarters by the family. Among them we find a real jewel: the Doge's Room, so called because of the presence of a marble portrait of a Doge, placed on top of an elegant fireplace sculpted by Jacopo Sansovino. 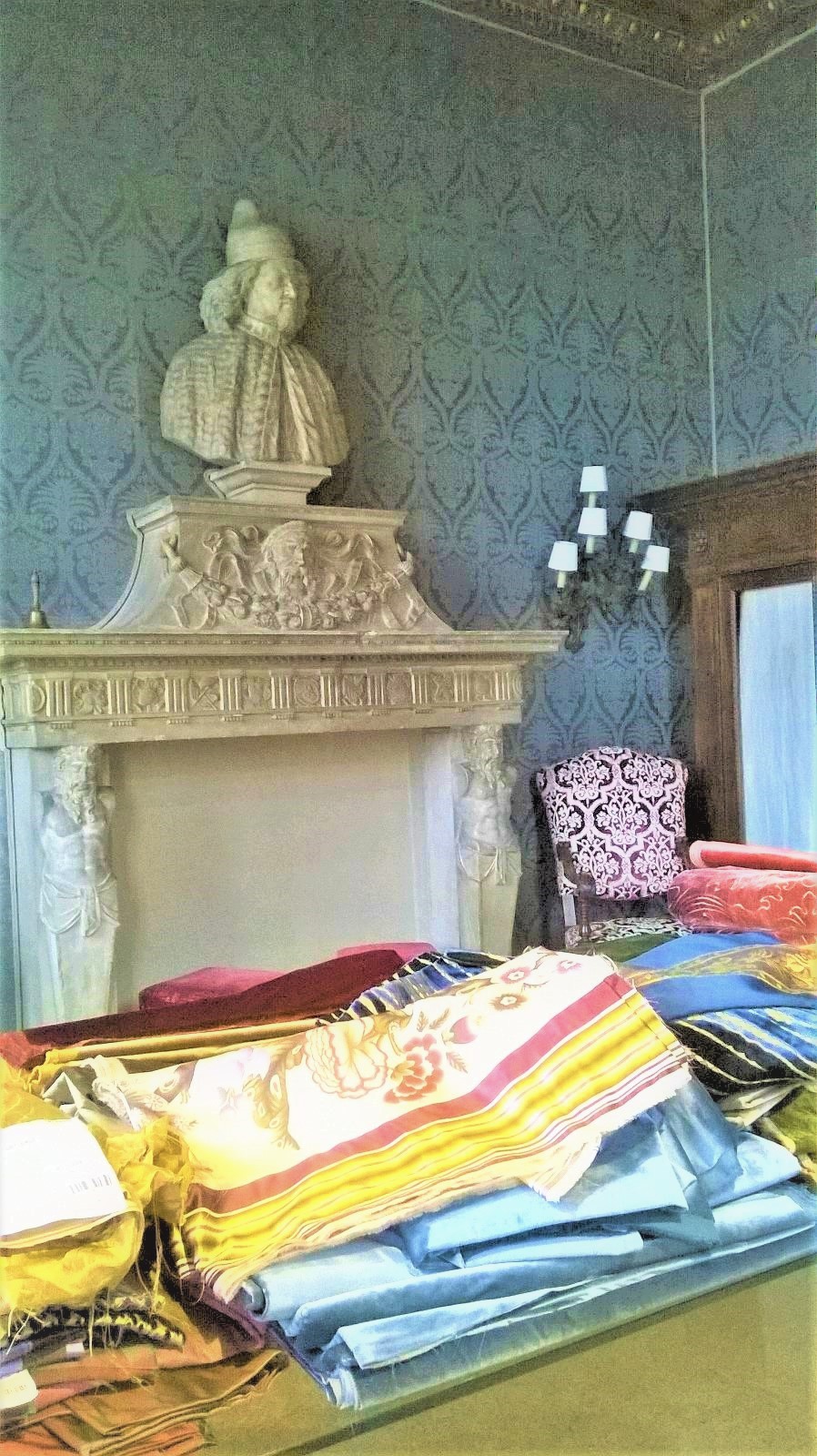 If we look upwards, though, our attention focuses on the precious wooden ceiling, carved and gilt with different motifs on a light blue background. 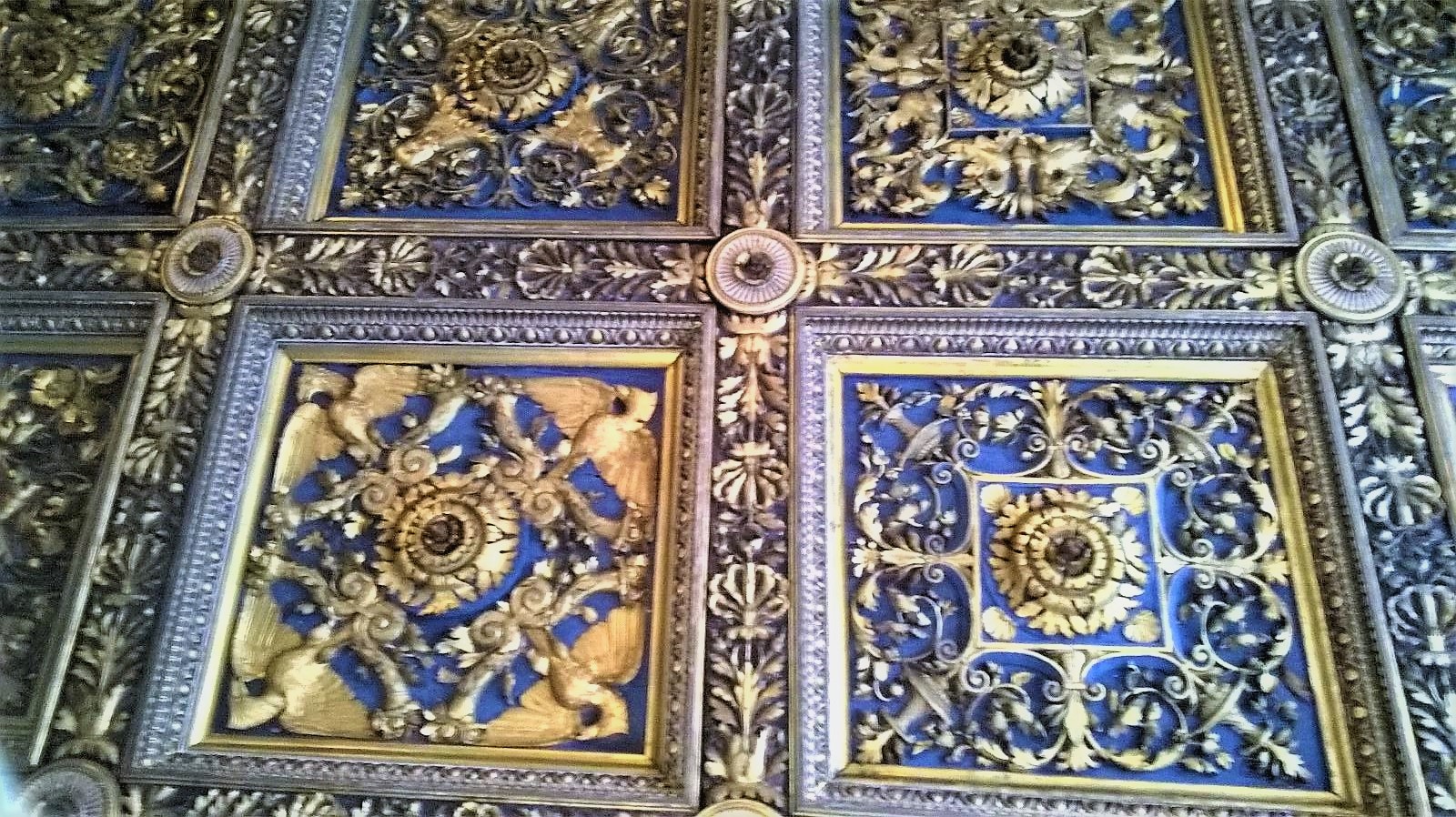 Ceiling in the Doge's Room

The same carvings, gold leaf details and blue background can be found also on the doors of the room. 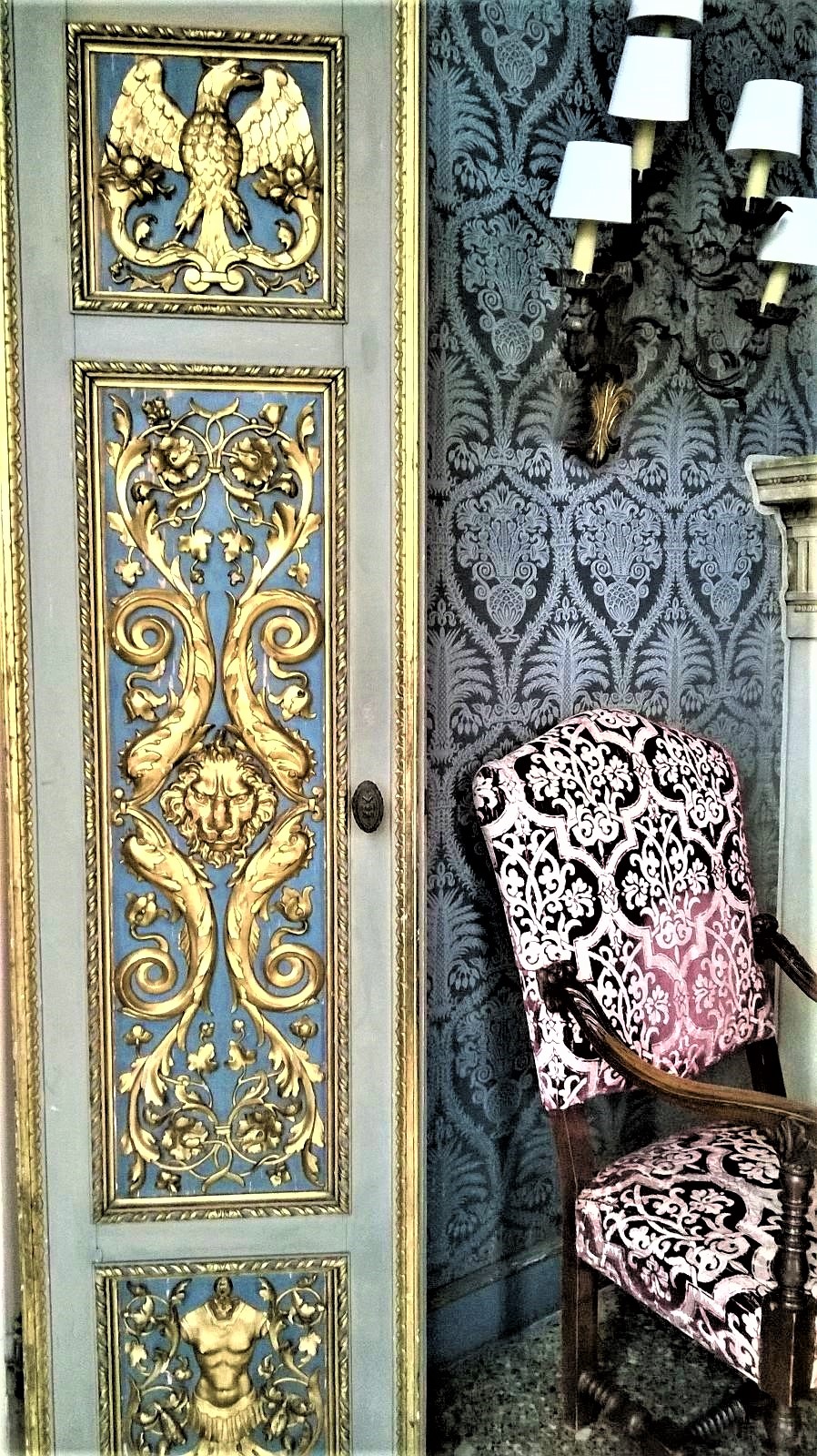 Door of the Doge's Room

The room next to this also presents elegant details, as for example the little wooden armchairs with precious red velvet, but at a first glance it seems almost aseptic, characterized by two rows of long modern drawers against the walls. When these drawers get opened, however, their content can take your breath away: ancient laces, chasubles, clothes, accessories, fabrics embroidered or dyed with different techniques or even woven with gold and silver threads, from the most different places, such as France, Great Britain, China, Japan and Venice itself.
This is the historical archive of the company, containing a collection of cloths, objects and samples from the 15th century up to early 20th century. The archive was created with the main aim of preserving, studying and reproducing, exactly the same or with a modern sensibility, the different ancient fabrics, for clothes, accessories and furniture. In one of the drawers a particular sample attracts immediately the visitor's attention: it is a piece of blue velvet decorated with a relief that displays a rose, in the center of which a little daisy appears. This is the exclusive velvet produced by Rubelli in the first half of the 20th century for the little private living room of Queen Margherita of Savoy in the Royal train (note that margheritais the Italian equivalent for daisy).

Visiting Venice, its palazzos, its museums, you can find Rubelli fabrics quite frequently: at the Opera House "La Fenice", for example, or at the Correr Museum, in the rooms once occupied by Empress Sissi of Austria. Today we can admire them also in the recently restored Fontego dei Tedeschi (the Germans' Warehouse), as drapes hanging out from the parapets of the corridors of the internal courtyard: a true note of history, color and elegance (see our post Customized tours of Venice: the Germans warehouse between the past and the future) 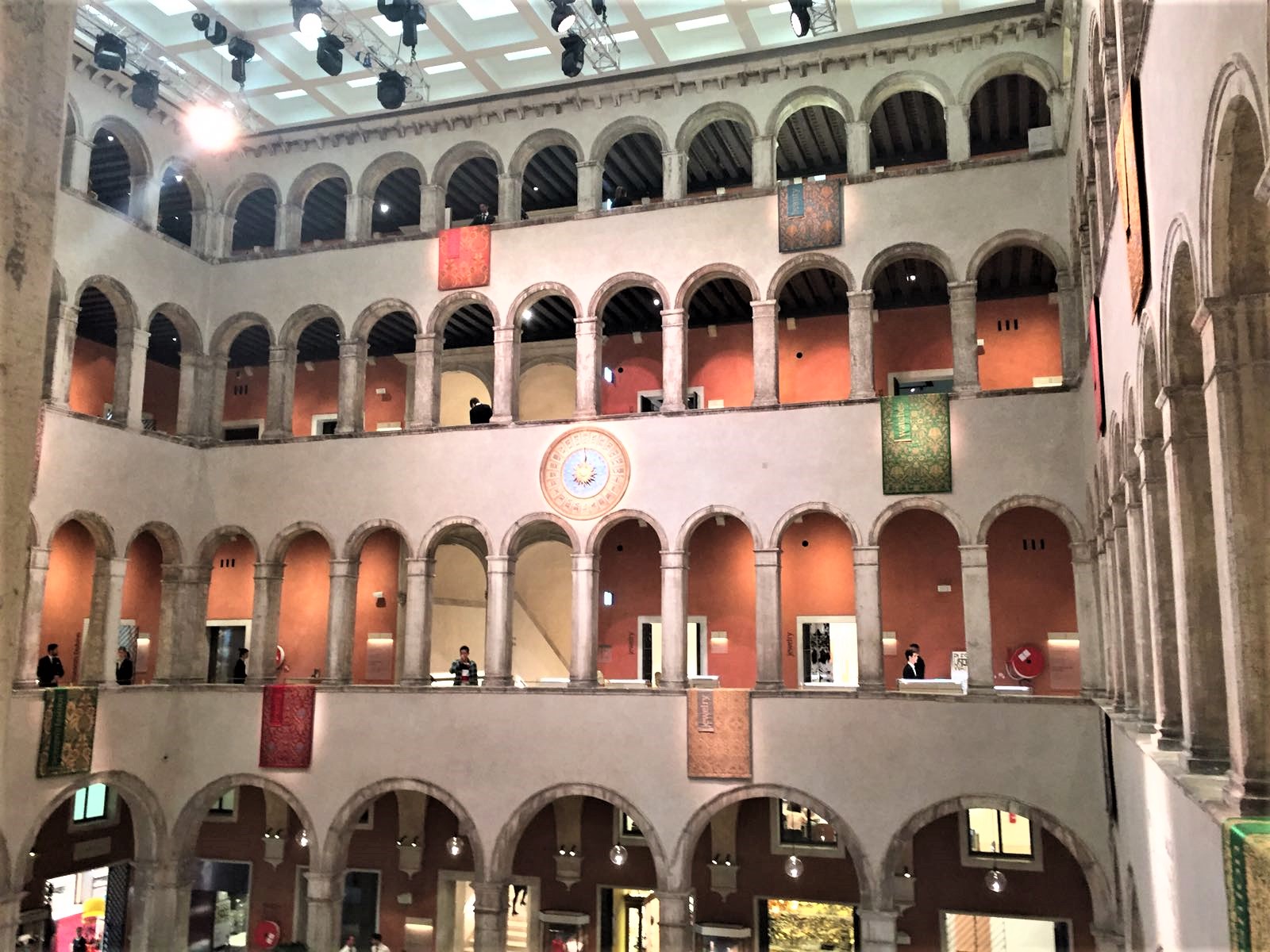 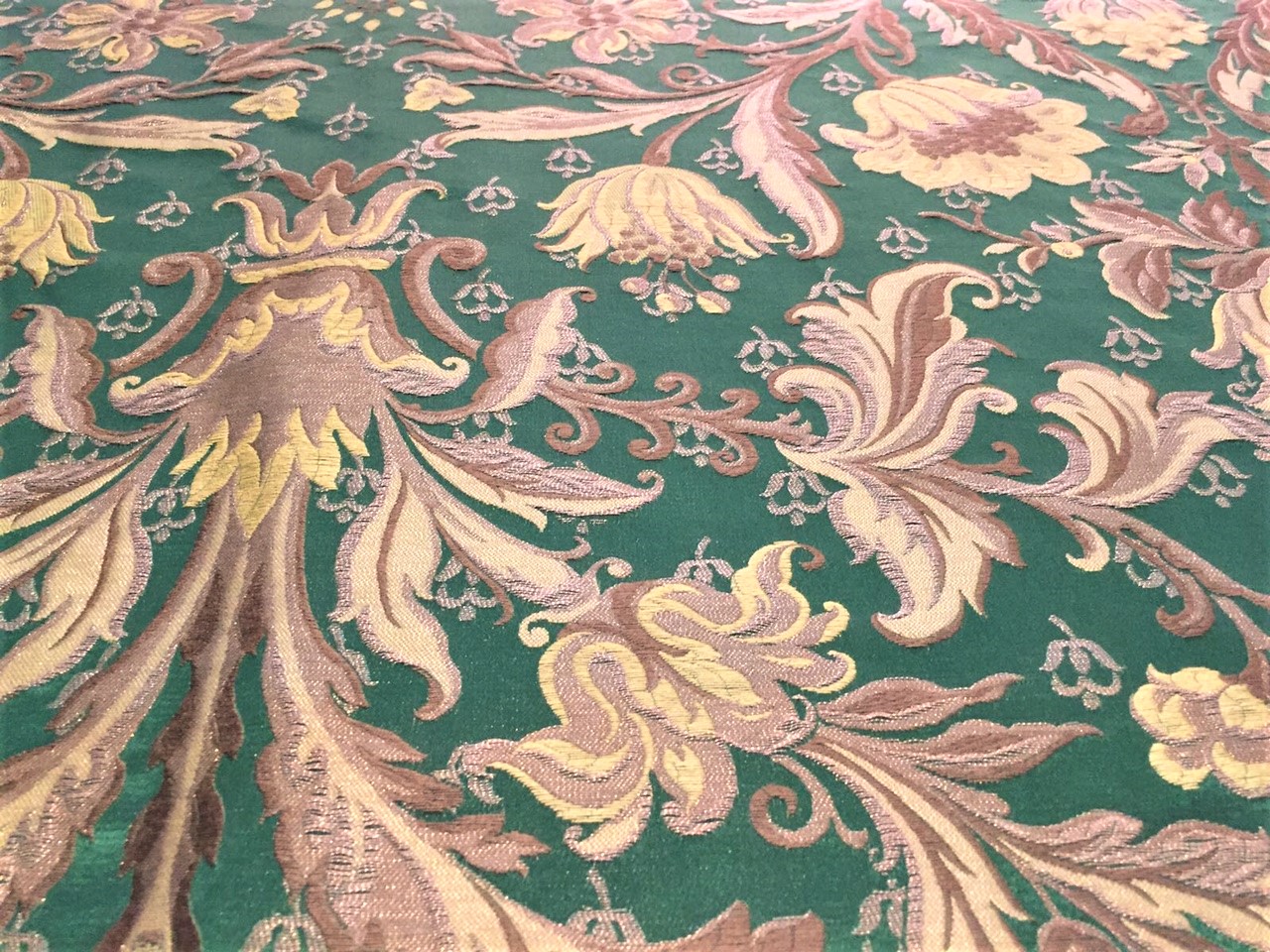 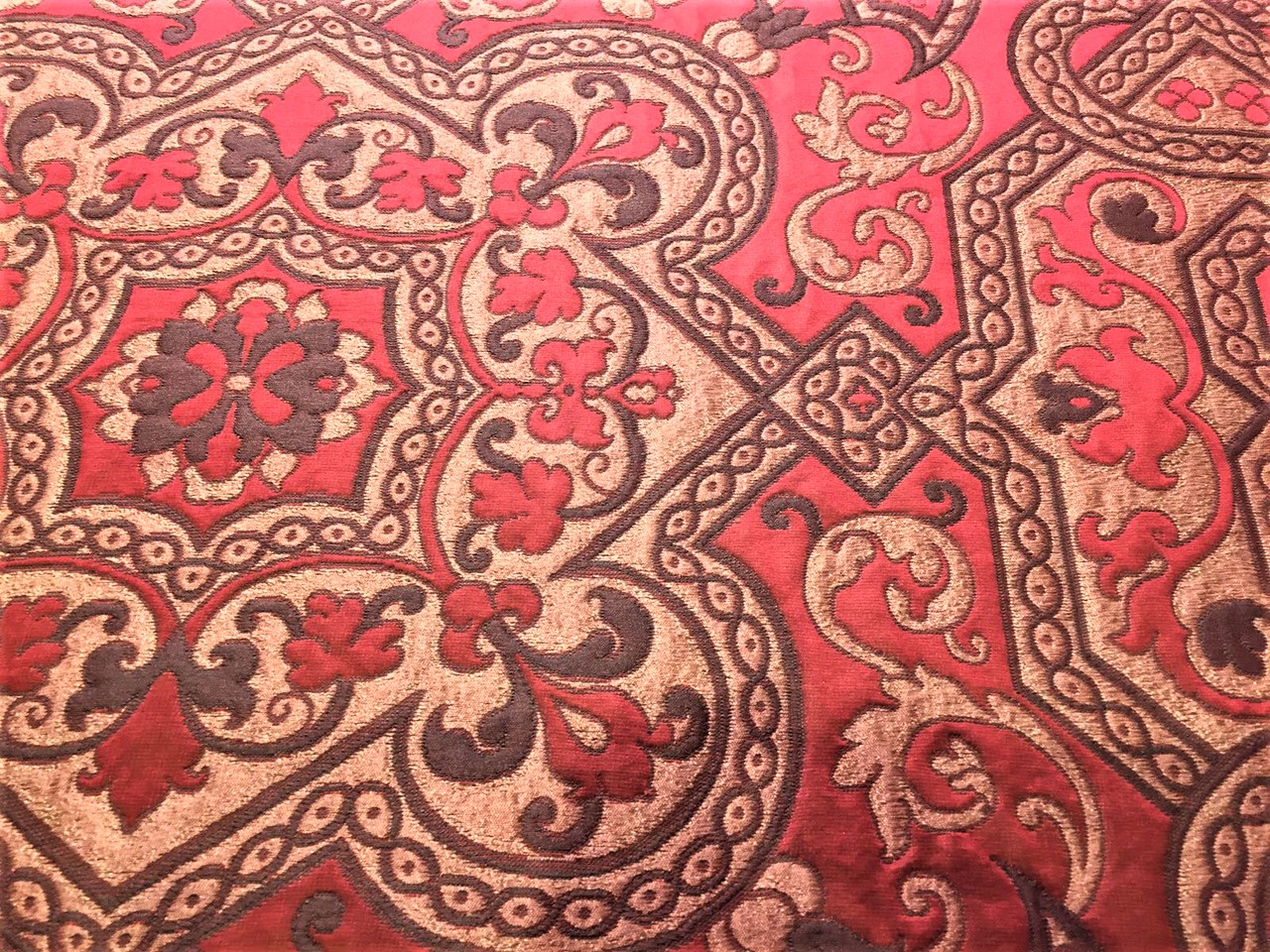 Drapes at the Germans' Warehouse, woven on the basis of ancient fabrics, today preserved in the archive of the company

Once again, Venice stupefies, as far as we are willing to catch the different shades and the peculiar aspects of everyday life in the city. We are waiting for you to open up the doors of our palazzos, like Palazzo Corner Spinelli, and to disclose the history and the beauty of the hidden corners in the Venetian maze.

As usual, we will leave the last "word" to a photograph: the view on the Grand Canal from the exquisite balcony of Ca' Corner Spinelli. 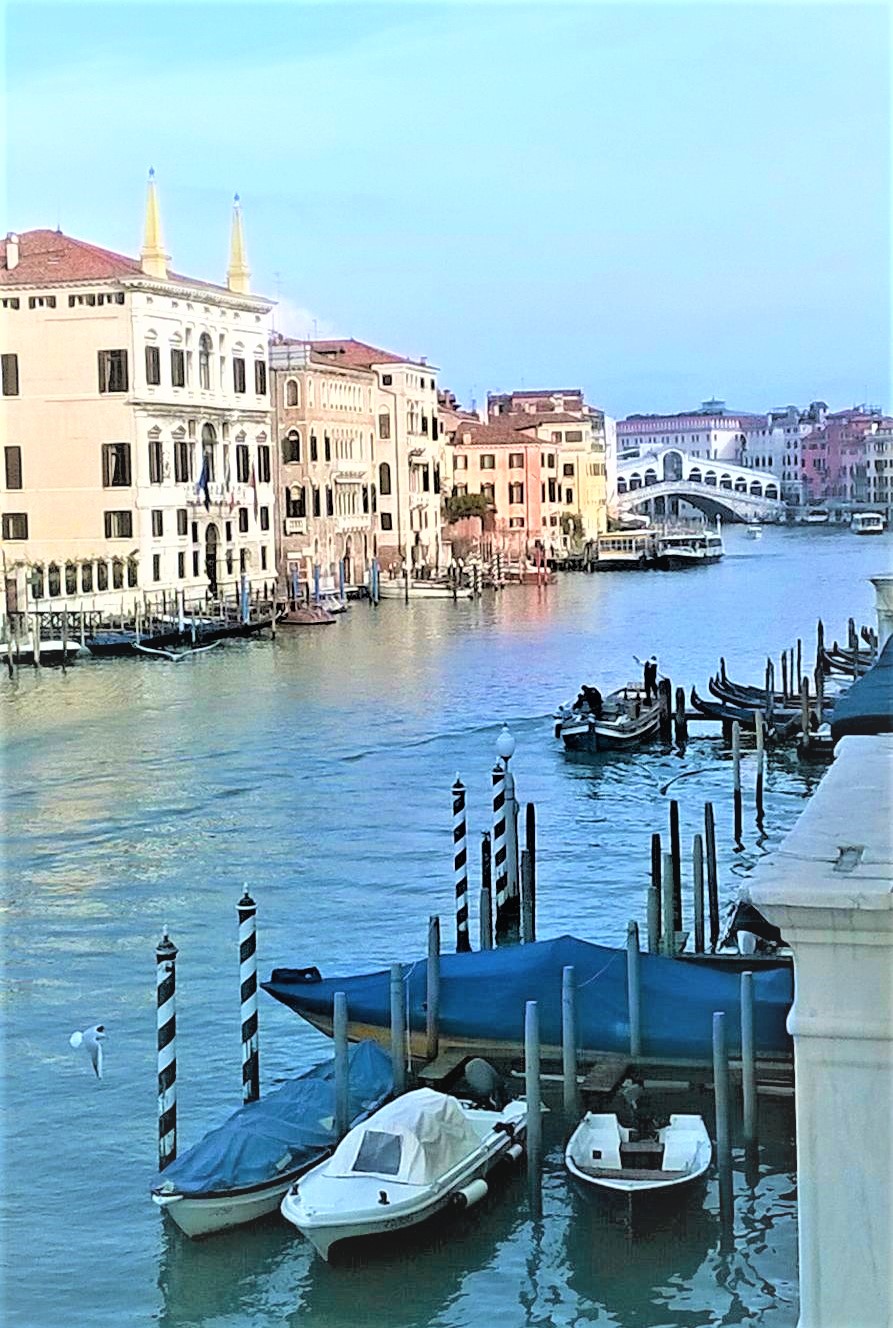 View on the Grand Canal from Palazzo Corner Spinelli