Private tour in Venice: the empress Sissi among lilies of the valley and cornflowers

The rooms of Sissi princess at the Correr museum: public and private life of the 'sad' Princess.

The first time Elizabeth of Austria came to Venice, she stayed for a short period in between 1856 and 1857. She was then extremely young, only 16 years old, and she came together with her husband, the Emperor Francis Joseph, and their little daughter Sofia. She immediately perceived the grudge that the Venetians felt towards the Hapsburgs, who had become the new "owners" after Napoleon's fall. Quite a few people came to see the walk of the emperor and his wife across St. Mark's Square: most of them desired to satisfy their great curiosity of seeing Sissi, whose fame of being a particularly beautiful young lady had preceded her long before she came to Venice. 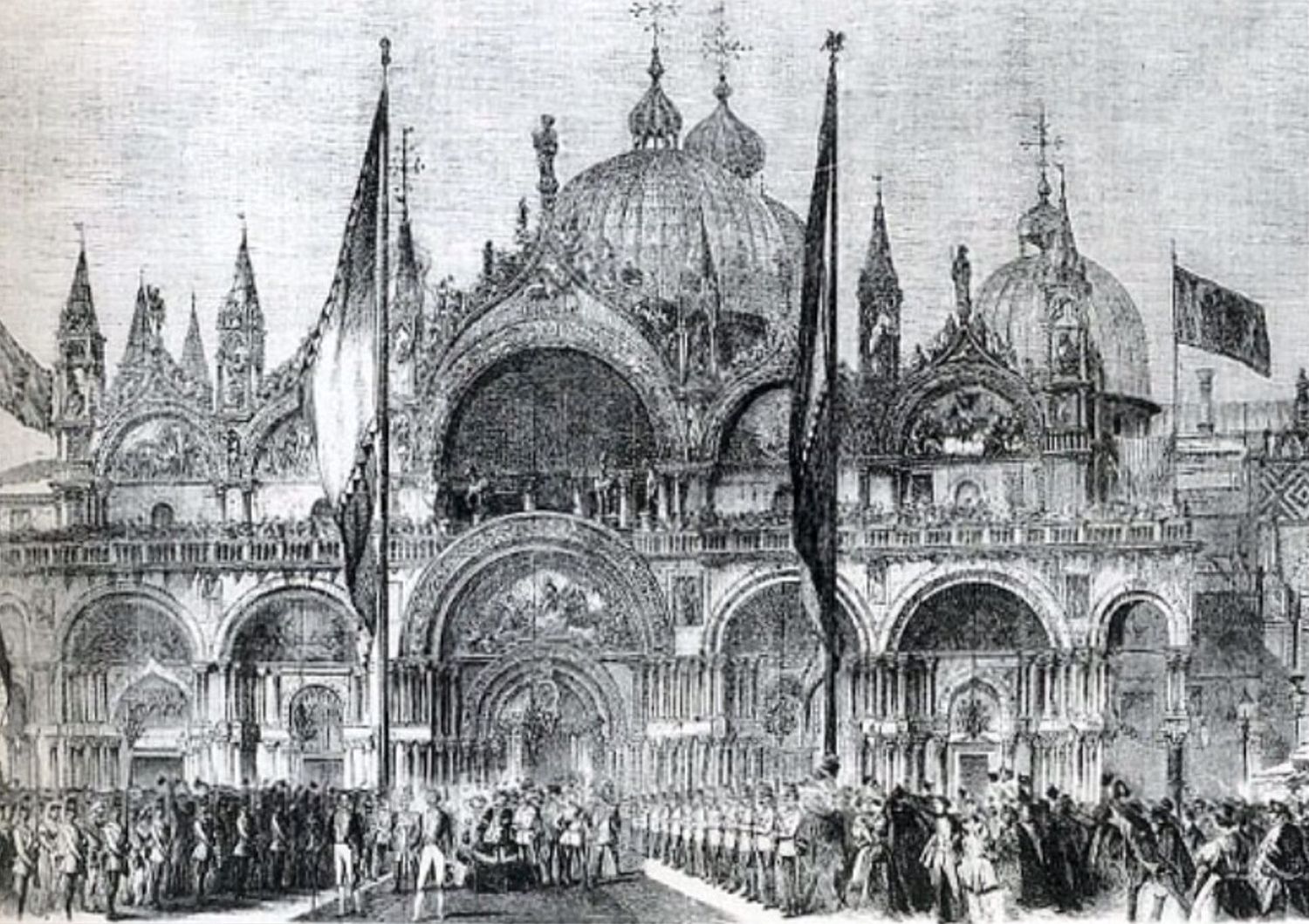 The royal couple chose as their residence he Procuratie Nuovissime at the end of St. Mark's square (that is, the structure built by order of Napoleon after demolishing the Renaissance church projected by Sansovino and dedicated to St. Geminiano); they also occupied some rooms in the Procuratie Nuove next door. They came up with an imposing Royal Palace in the very heart of Venice. The desire for grandeur, that Napoleon persecuted and that was perfect also in this new situation, can be perceived immediately as you walk up the monumental staircase leading to the equally magnificent ballroom. 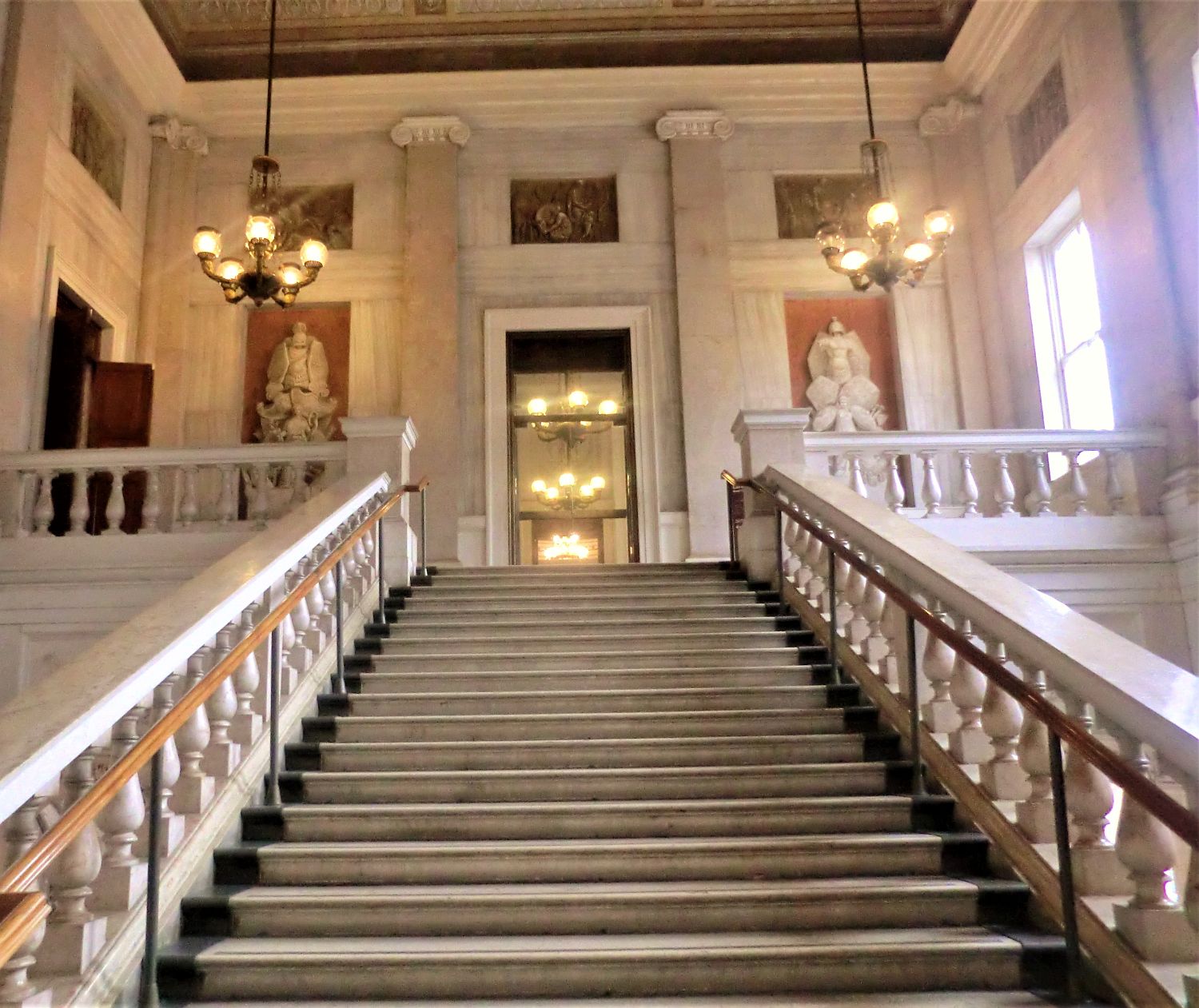 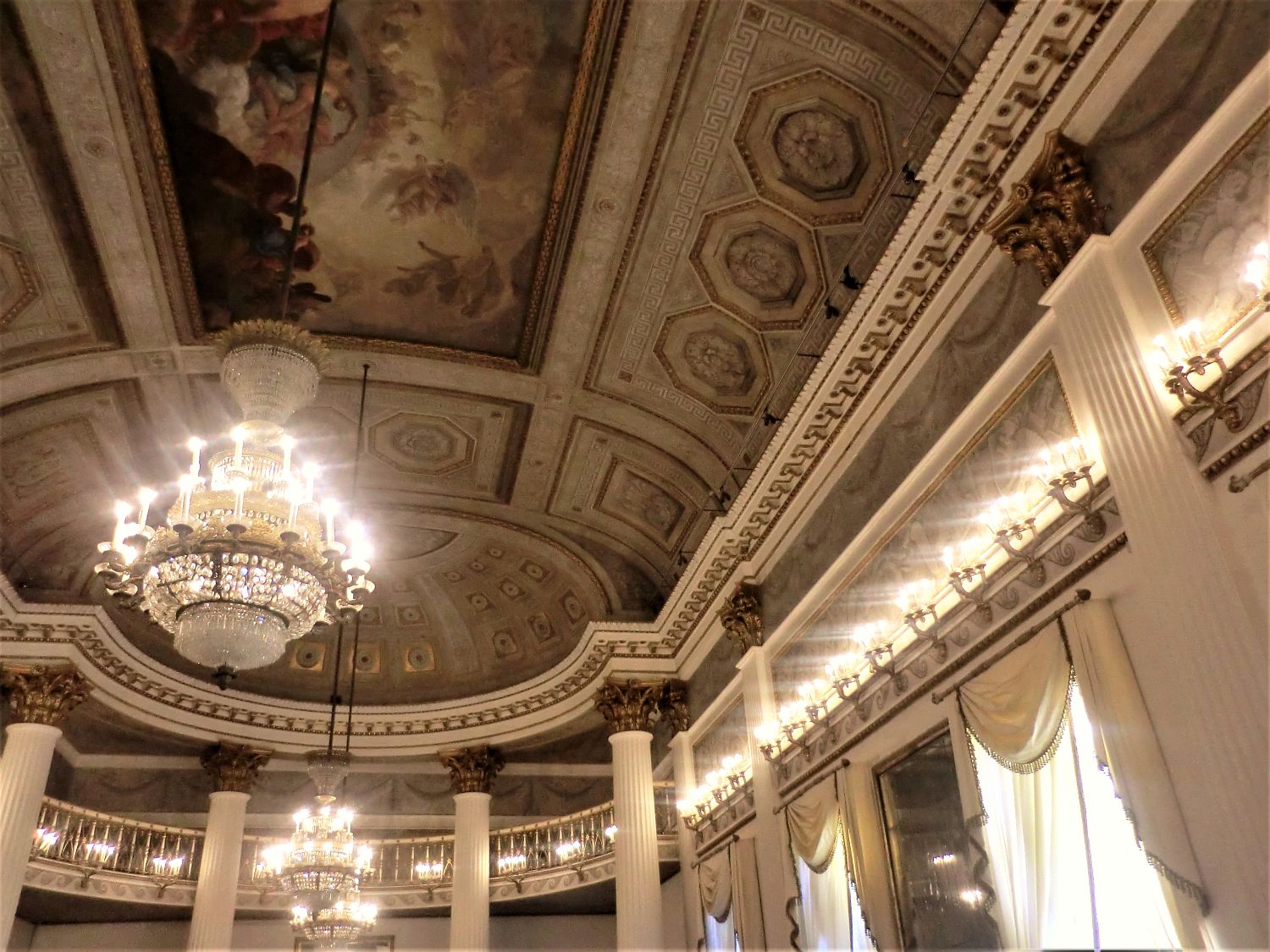 When Venice passed to the Austrian rule, the building commissioned by the French emperor was restored and obviously adapted to host the new sovereigns. In 1866, when Venice became part of the Italian Kingdom, the apartments previously occupied by the Hapsburgs became the residence of the Savoy family, up to the second decade of the 20th century, when it became property of the State and it was reorganized to host the rich art collection of Teodoro Correr, moved there from the Turks' Warehouse.
In 1940 some rooms were transformed into offices and at this point the furniture and decorations of these rooms started to suffer from lack of restoration. However, in the past few years these apartments have been accurately restored, so in 2012 they were opened to the public and today we can visit the 9 rooms that once belonged to Sissi. Some of them would be occupied only by the empress herself, whereas some others were used to receive her guests in official occasions.
These rooms are part of the visit of the Correr Museum. The decorations by Giuseppe Borsato and Giovanni Rossi are now as magnificent as in the past. On the walls we can find Rubelli fabrics (see our post Private tour in Venice: merchants, goods and precious cloth) that reproduce exactly the original ones still hanging on the walls behind the new drapes. 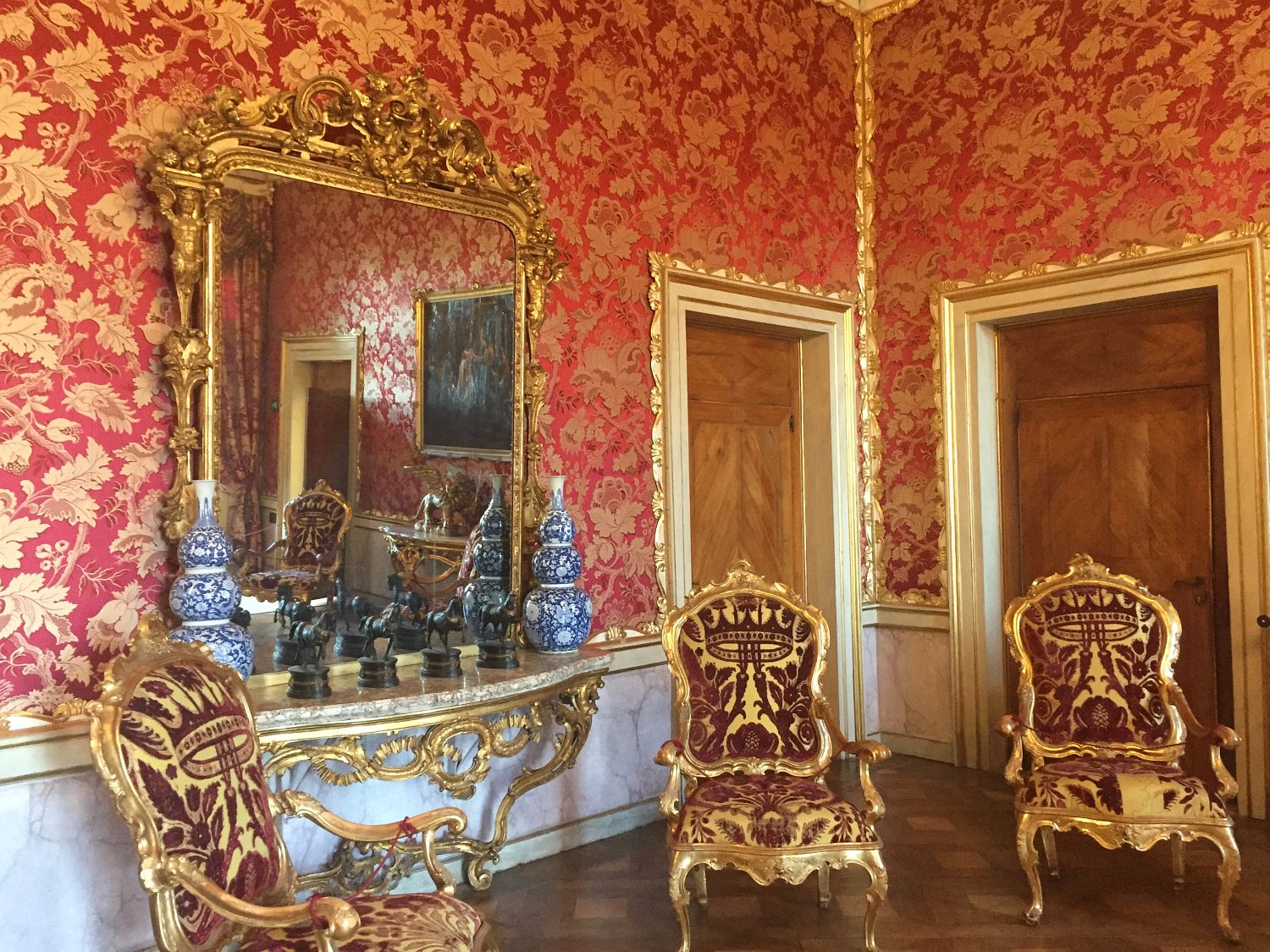 But what about Sissi? How did she spend her time in Venice? How did she feel? She was undoubtedly used to luxury, but she seemed not to care about it. 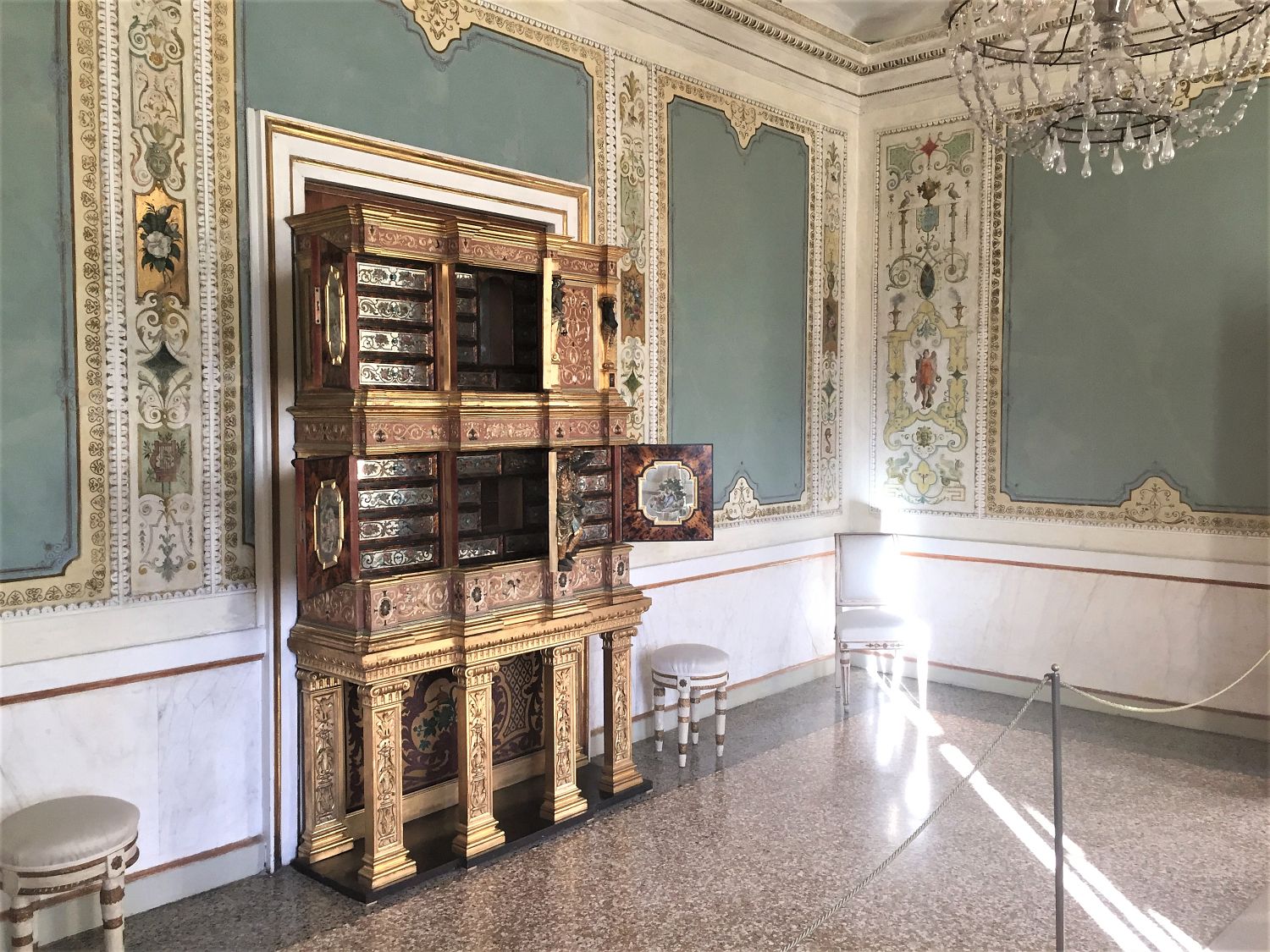 "I am a seagull, who does not belong to any country, no beach is my homeland, I love no place in particular, I fly from wave to wave...". This is what she wrote in one of her numerous diaries full of poetry. When she was alone, she would spend a lot of time writing, which would give her some comfort.

The second time Sissi came to Venice she stayed for quite a long period, from October 1861 to May 1862. She frequently attended the Opera House "La Fenice". She visited several convents, orphanages and charitable institutions in general. She enjoyed the Historical Regatta from palazzo Balbi along the Grand Canal. The Empress was invited to the parties given by the former Venetian nobility, who had not accepted the Hapsburg rule, but did not despise her presence in their private houses. Sissi also visited the Accademia Galleries, went for walks on the Lido beach, enjoyed gondola rides with her husband Franz, who often came to Venice by train to join her. 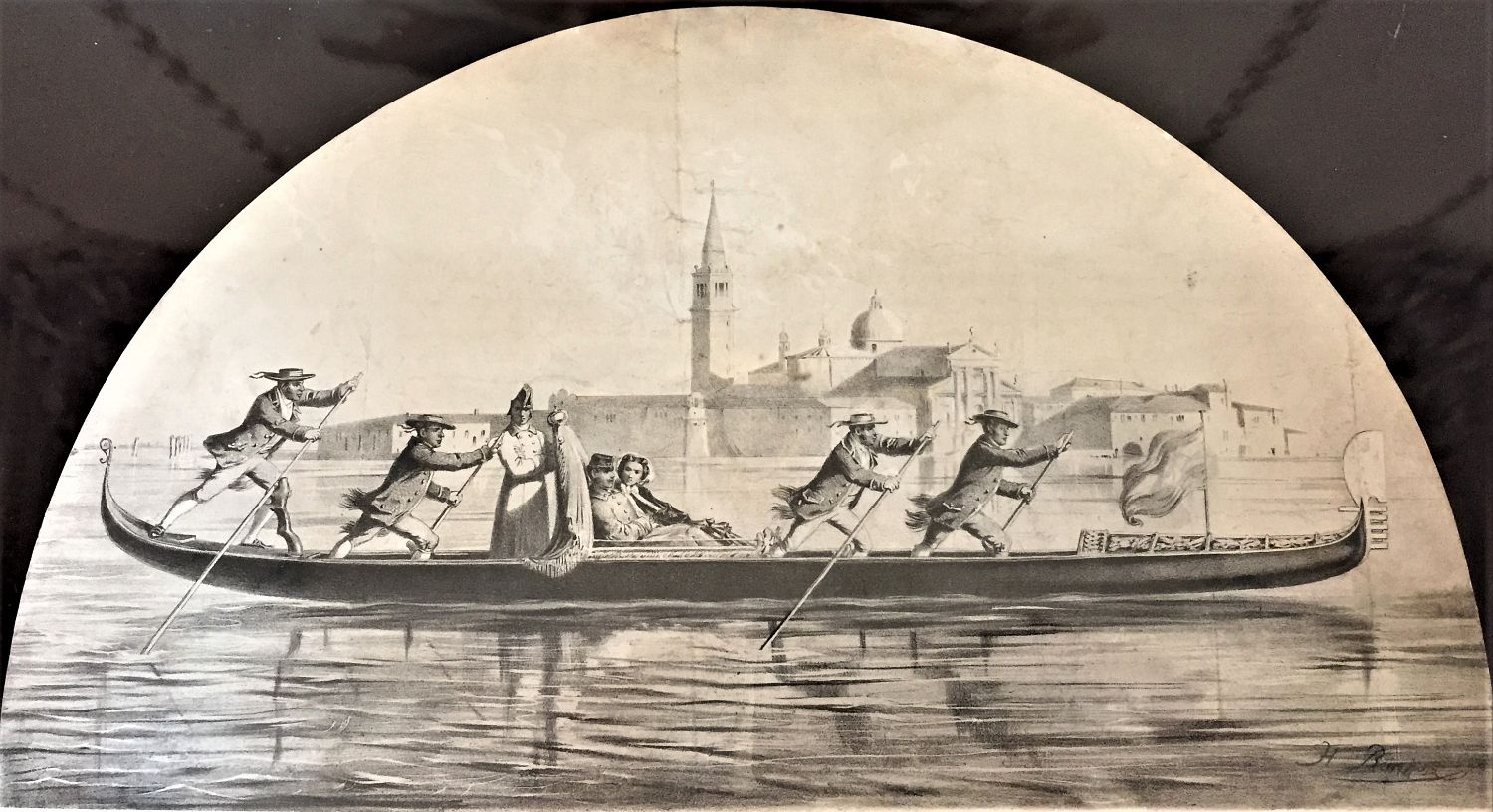 The Royal couple on a gondola

This was Sissi's social life in Venice. What happened, though, when the doors of the Royal palace would be closed, when she was alone in her rooms? Among the nine rooms that we can admire today in the Correr Museum, the boudoir was her favorite. We can try to imagine her alone in this room, melancholic and thoughtful, with a pen in her hand, writing such lines: "I wish I had never left the path that would have made me free; I wish I had never got lost, choosing the way to vainglory. I woke up in a prison with my arms painfully chained. The more I long for you, freedom, the more you abandon me...".
The room is quite small, cozy and intimate, and is decorated with Sissi's favorite flowers, lilies of the valley and corn flowers, that we can find everywhere, at the corners on the ceiling and along the walls, as if they were loving arms meant to hug and protect the sad Empress. 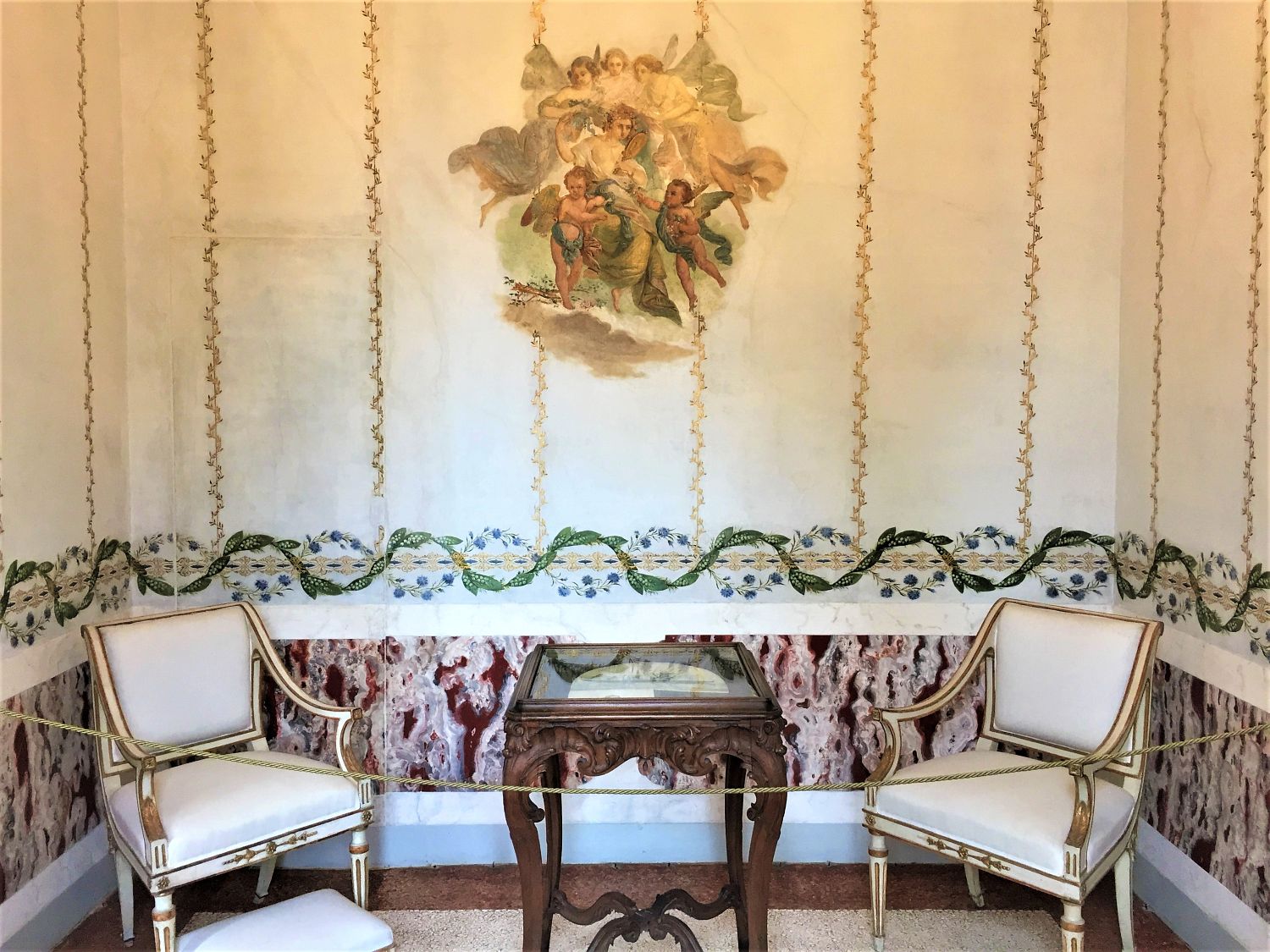 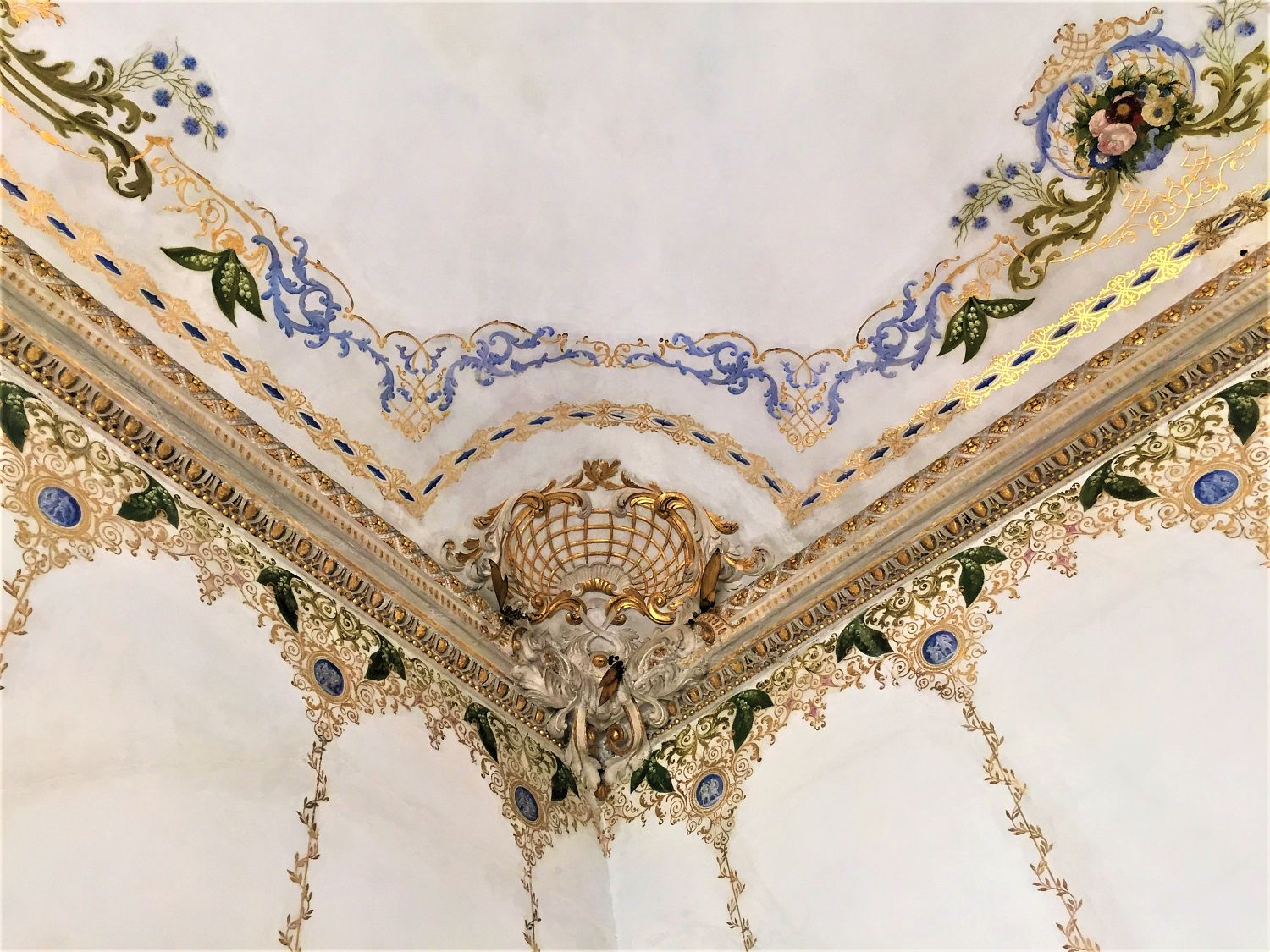 A corner decorated with lilies of the valley and corn flowers

The coats of arms of the kingdoms of Austria and Bavaria, supported by eagles, hang on the walls above the doors. 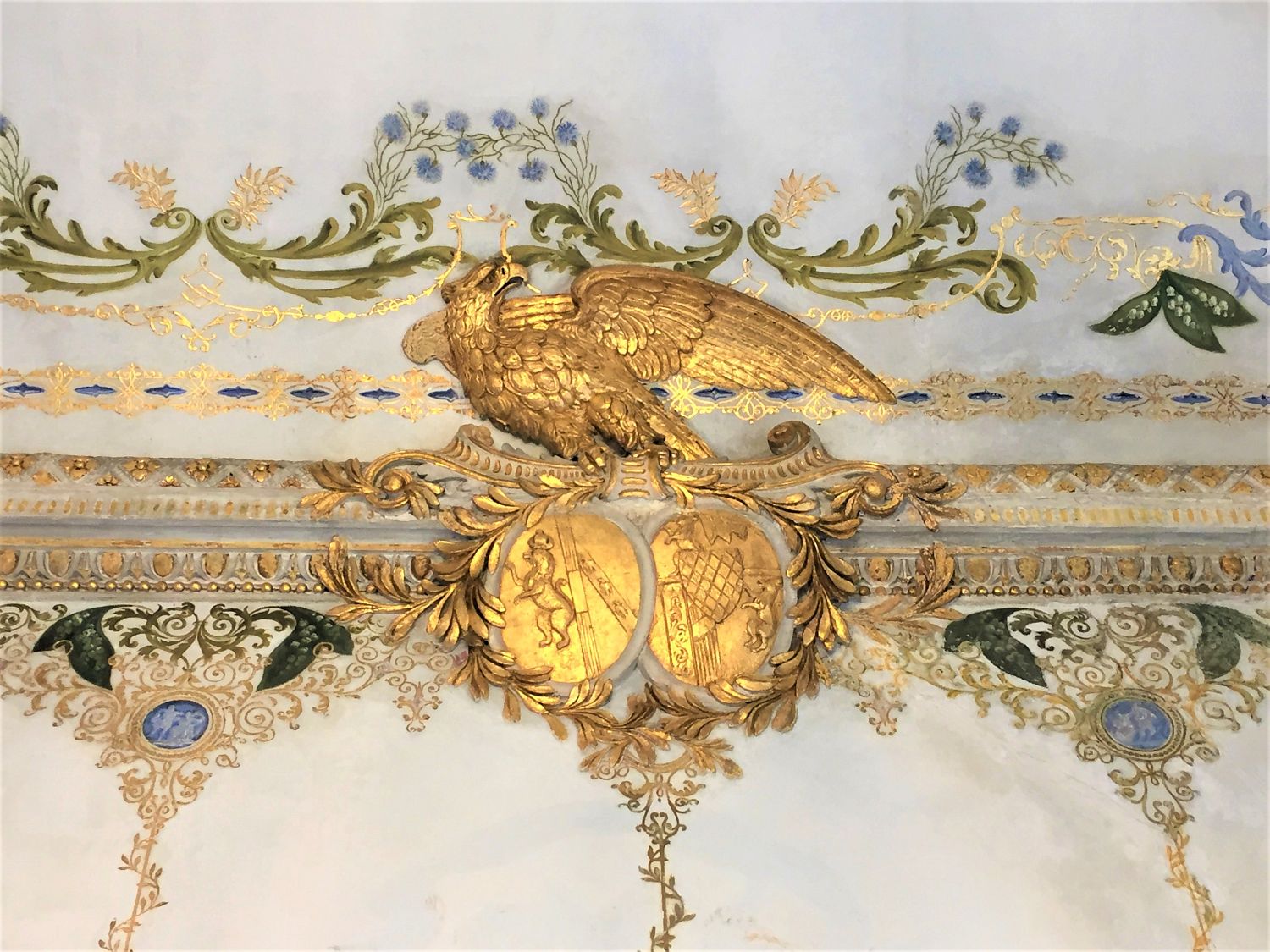 The coats of arms supported by eagles

Two oil frescoes complete the decoration of the room: on the wall we can admire "Venus's Toilette", whereas on the ceiling the fresco represents "The Patron Goddess of the Arts", whose face is definitely Sissi's portrait. 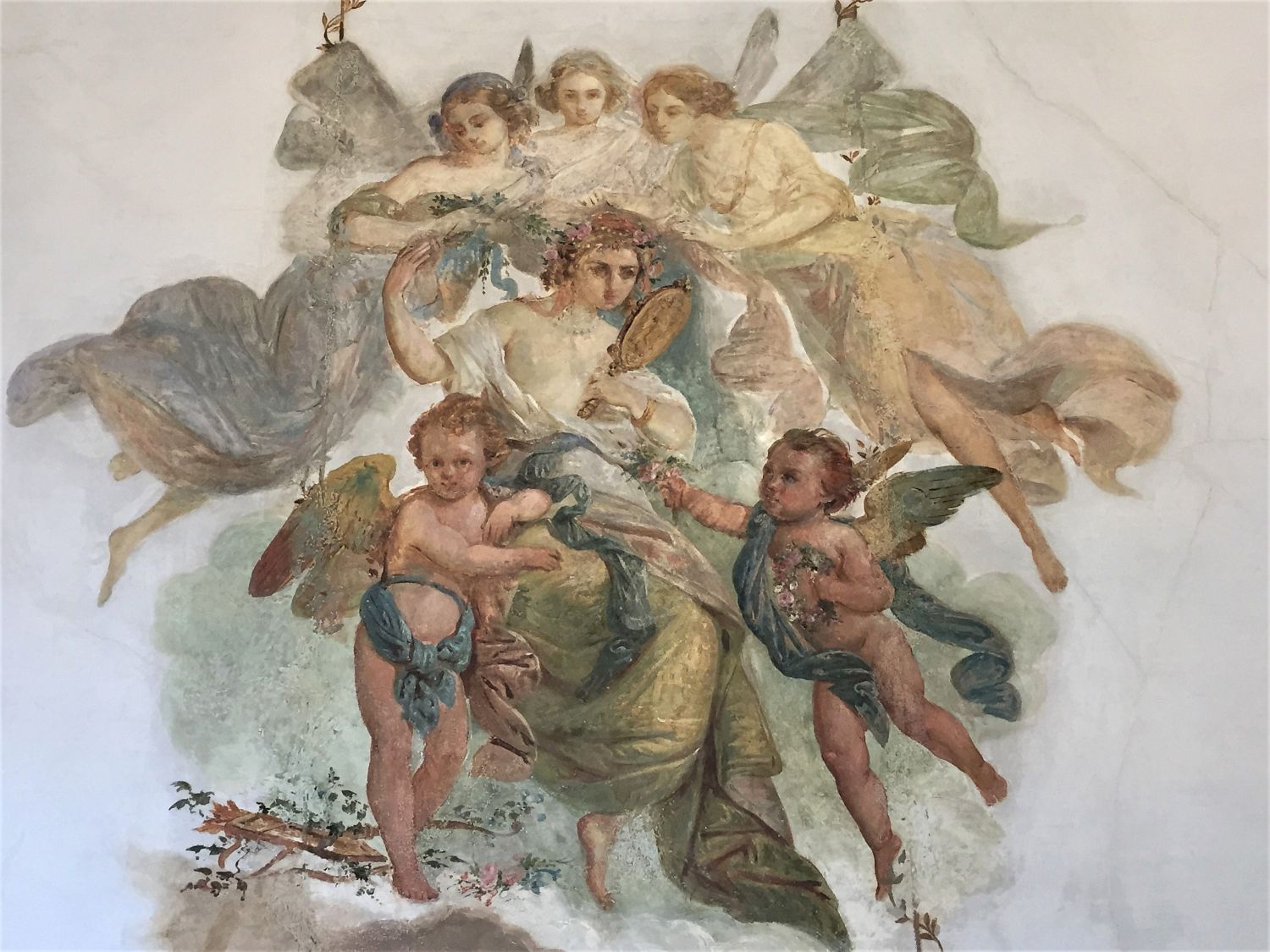 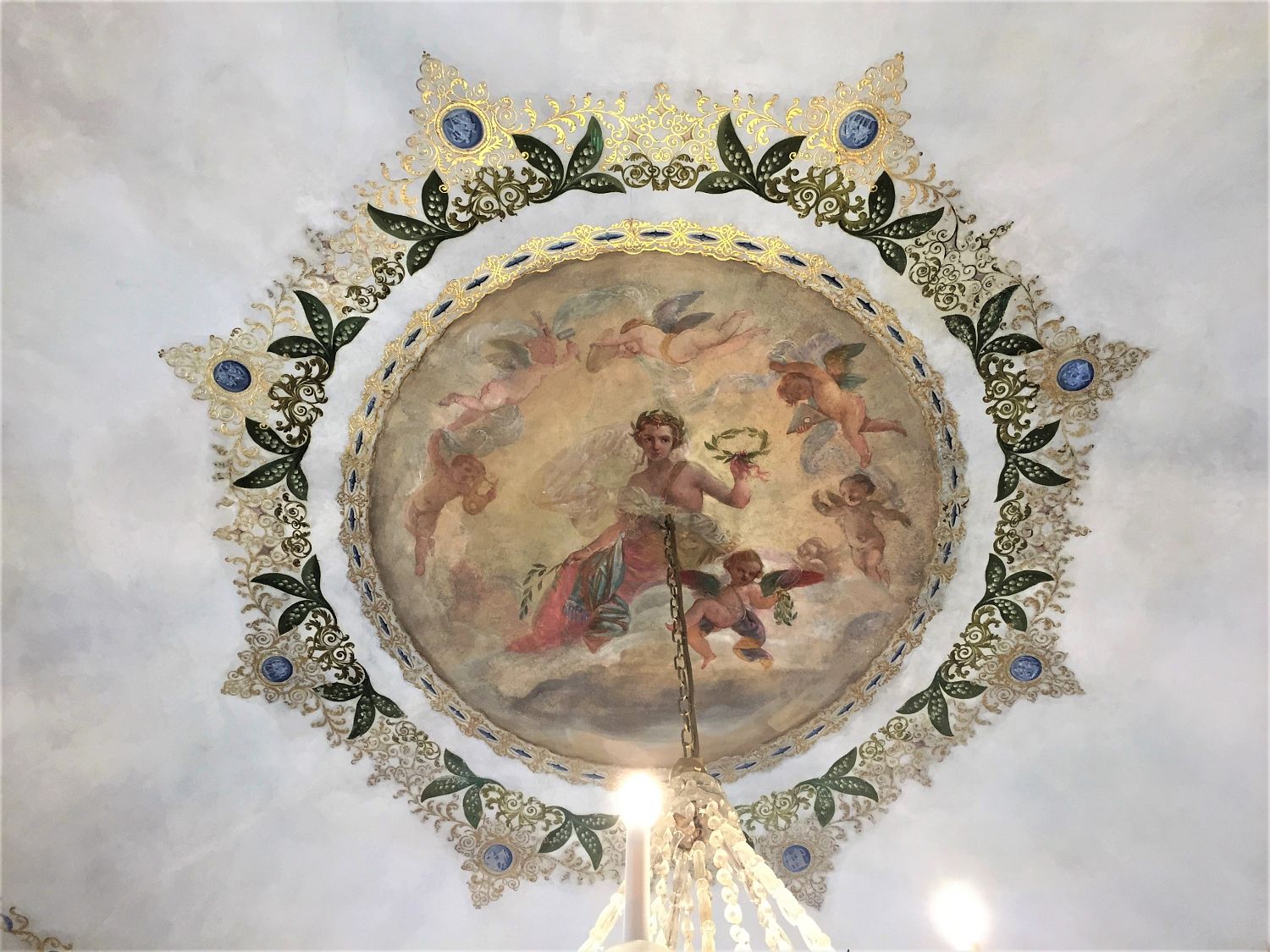 The Patron Goddess of the Arts 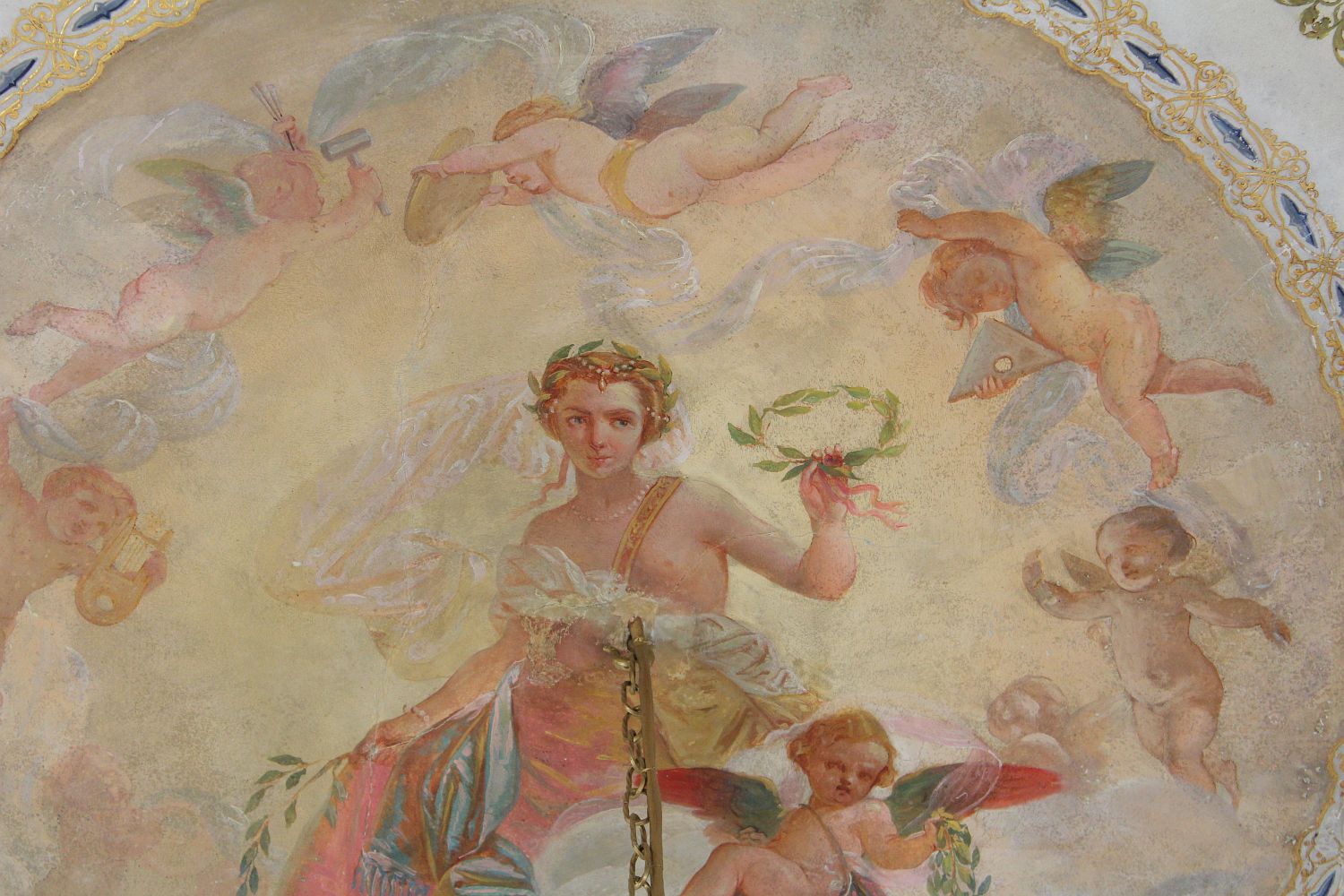 The Patron Goddess of the Arts, detail, Sissi's portait


From her windows Sissi could enjoy the view on St. Mark's water basin and on St. George's island and its magnificent Palladian church. The sea, and water in general, would normally inspire her with feelings of freedom and serenity: "That freedom they wanted to steal from me... That freedom... I have found it in water...".
Looking out of the windows, her gaze could stop on the Royal Gardens where she loved to walk and admire the plants and flowers she would take care of personally. 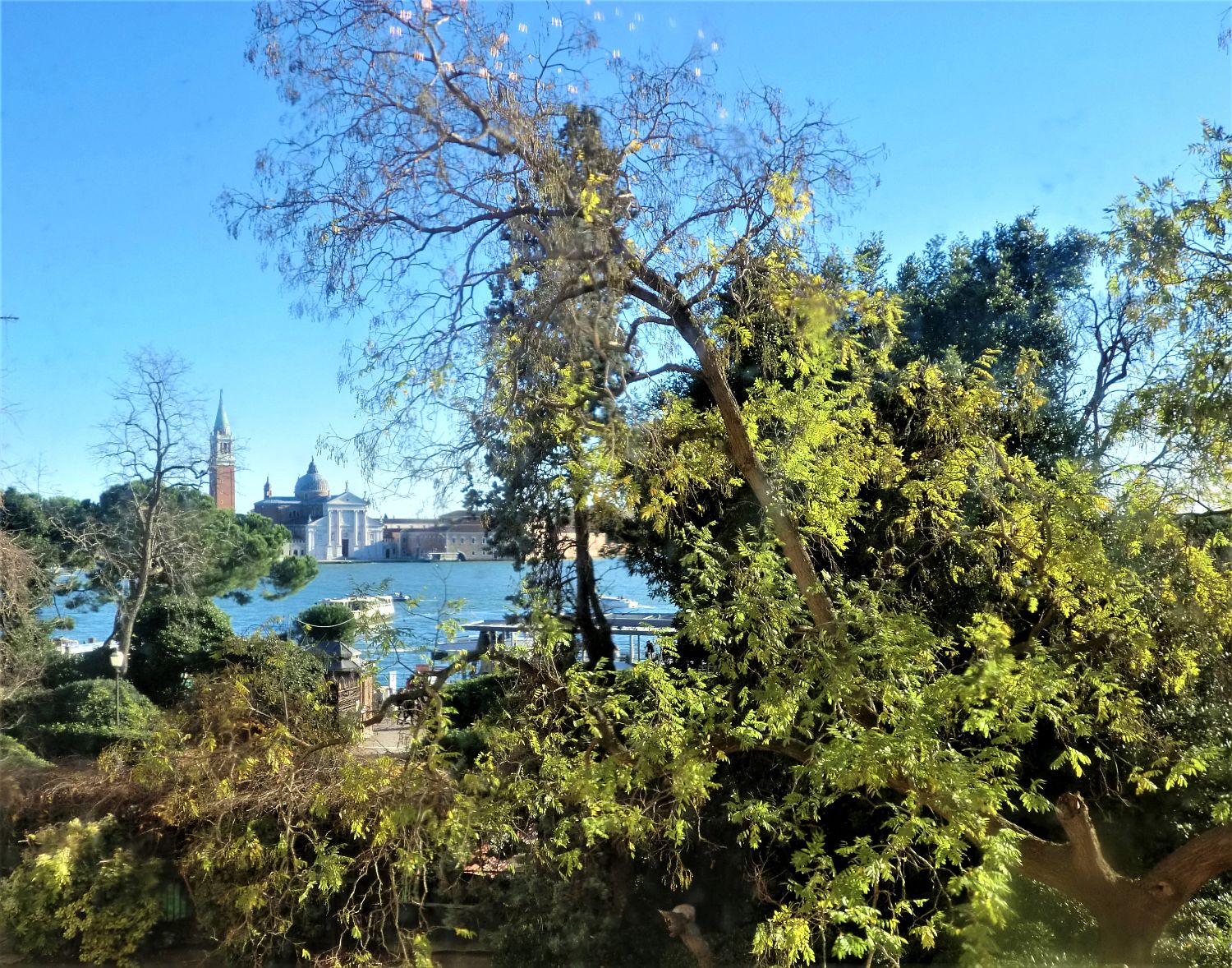 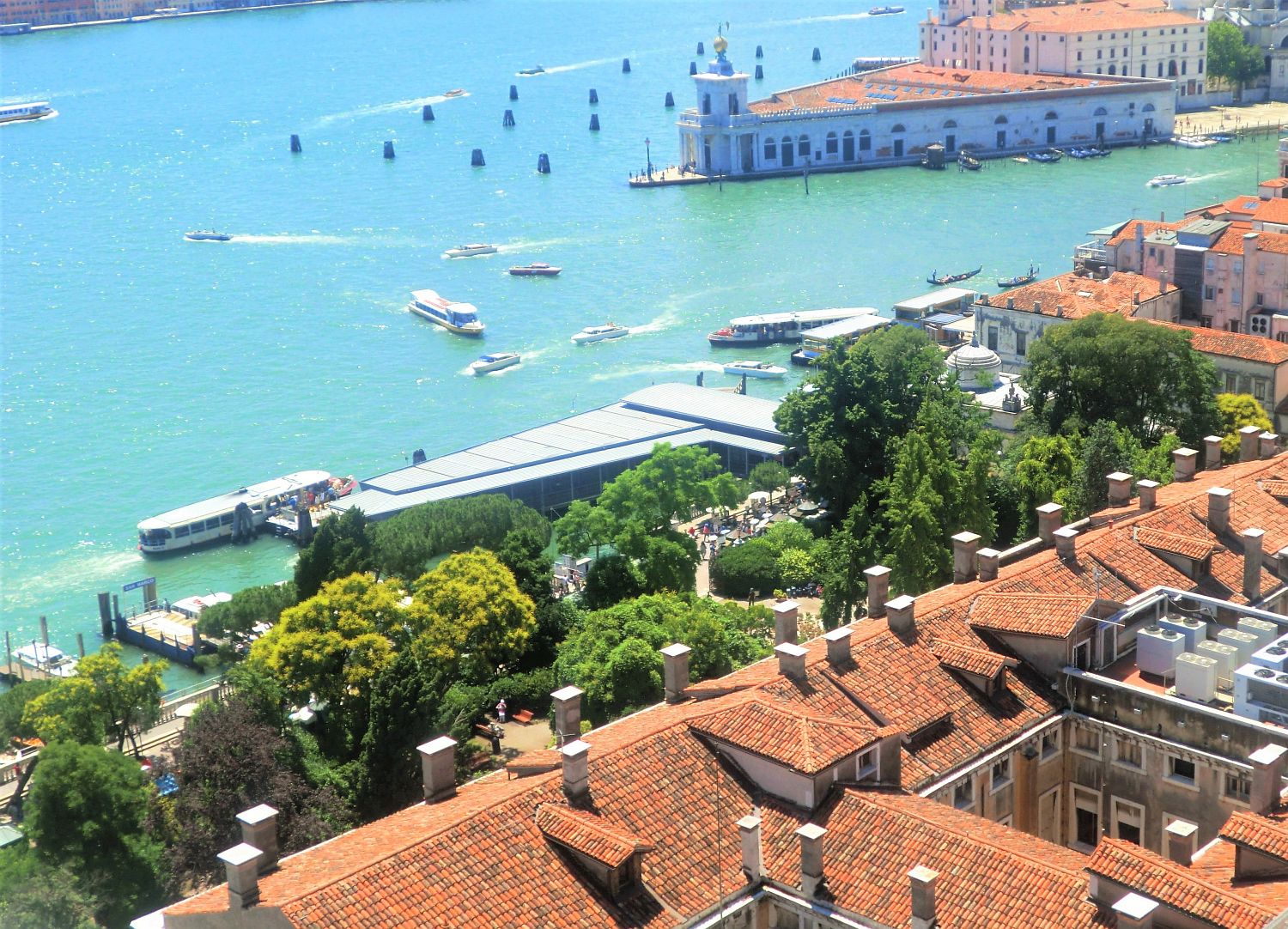 The Royal Gardens as seen from the top of the bell tower in St. Mark's square

In her boudoir, surrounded by lilies of the valley and corn flowers, her life could almost appear less heavy. It is not a case that Sissi chose those flowers for her private room: the lilies of the valley are in fact a symbol of happiness, fortune and innocence, whereas the corn flowers represent kindness and lightness. These were probably the feelings that Sissi would look for, and that perhaps could sometimes find, in this room.

Her relationship with Venice had a conflicting nature: she could feel absolute indifference and bitterness as well as serenity and lightness. As she wrote: "I would like to be left alone, to find some peace... After all I am just a human being as you are".

We will now take leave with one more picture of Sissi's favorite flowers, wishing you all the qualities they represent. We will be waiting for you in Venice to visit together the rooms of this melancholic and rebel Empress. 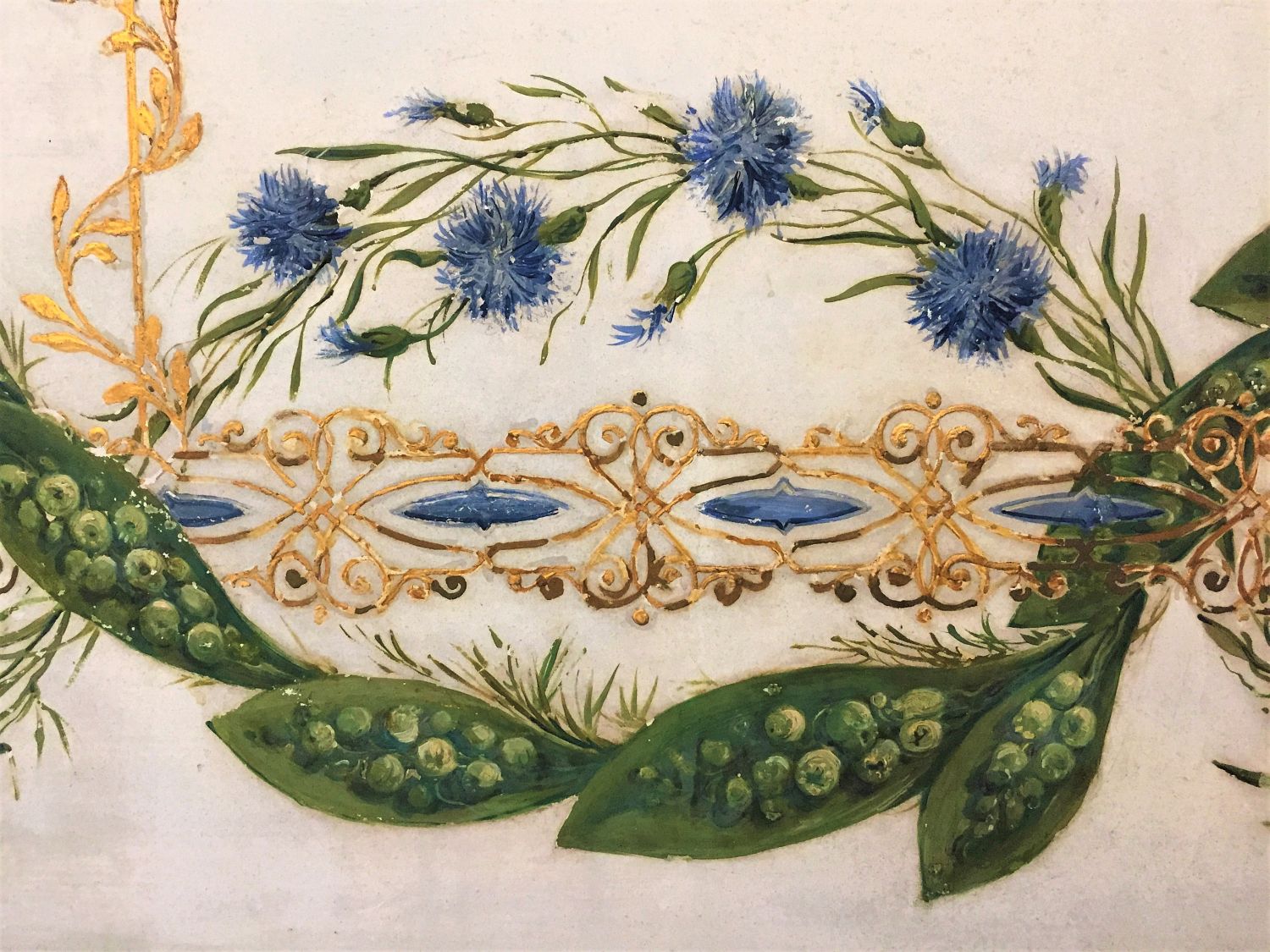