Specific guided tour in Venice: Titian's mountains in his paintings

Titian's paintings and his mountains When little Titian aged 9 came to Venice to work as an apprentice in the workshops of the best known painters in town, he probably would not have imagined that he himself would become such an excellent and famous artist thanks to his innovative pictorial language. He was born in Pieve di Cadore, at the northern border of the Venetian Republic. Although he actually spent most of his life away from his birthplace, he kept loving it sincerely. 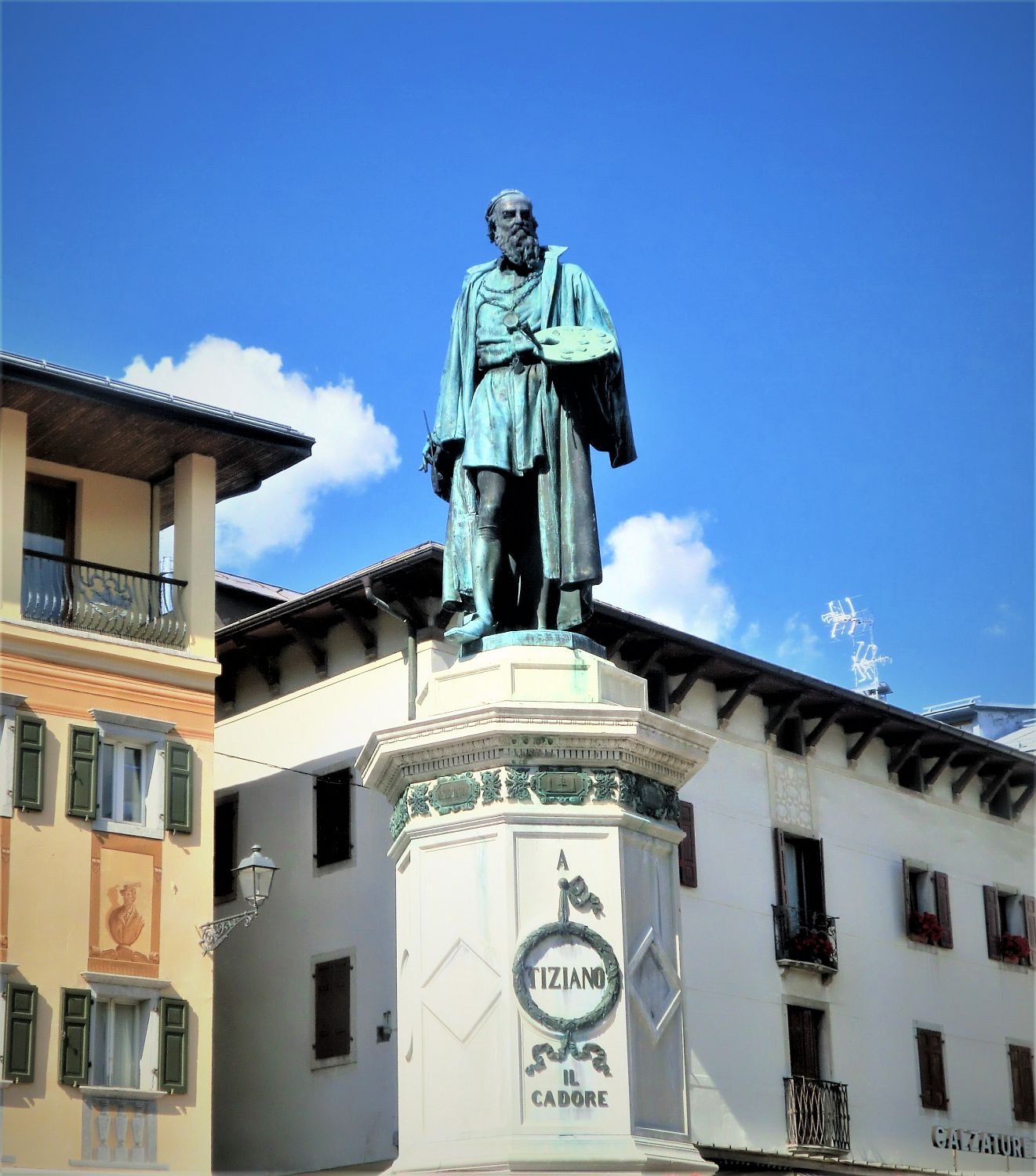 It is not a case, then, that in Venice he bought a house in the Cannaregio district, from where he had the possibility of admiring his beloved spectacular mountains on clear days. 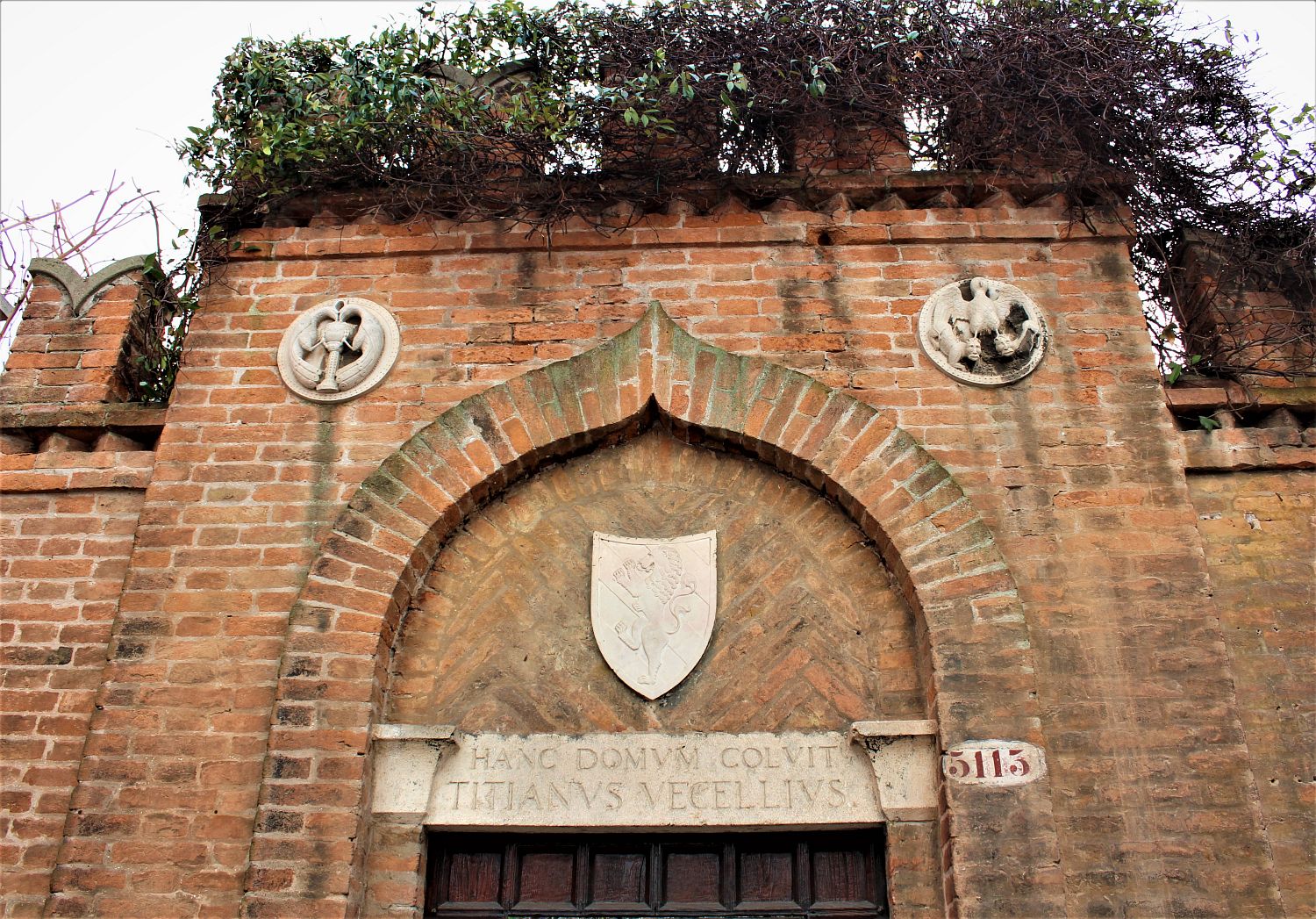 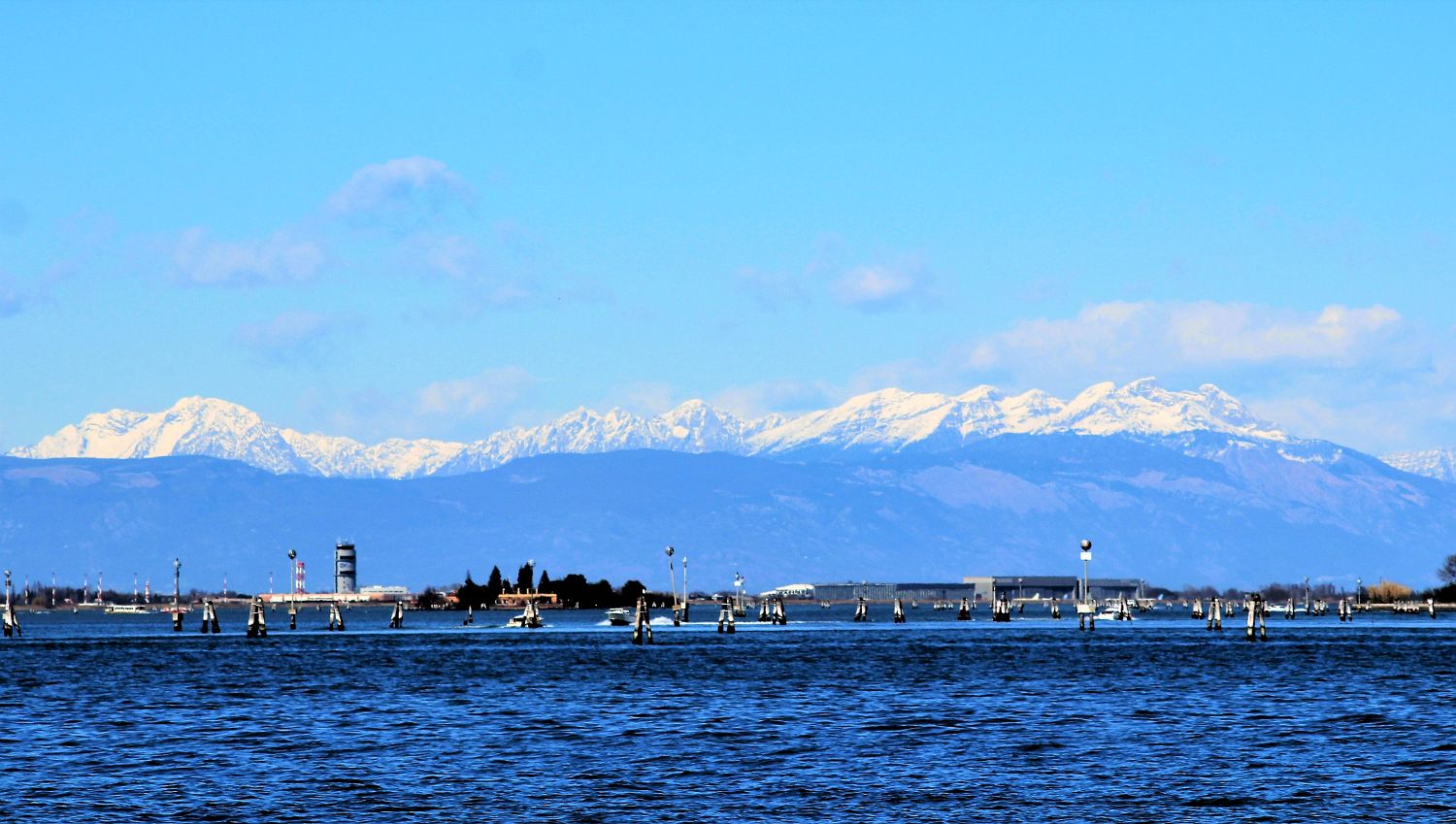 Titian's nostalgic feeling for his mountains can be frequently found in his paintings, as to recall ideally his childhood in the Cadore region. Let us then trace the presence of the Dolomites in Titian's paintings still preserved in Venice.

At the very beginning of his career, he painted a series of frescoes at the Germans' Warehouse, Fontego dei Tedeschi, (refer to our post  Customized tours of Venice: the Germans warehouse between the past and the future ). Only some fragments have survived of that magnificent work. One of such fragments represents Justice (1509): on the left, behind the lady's arm holding the sword, it is still possible to see the outlines of some mountains. 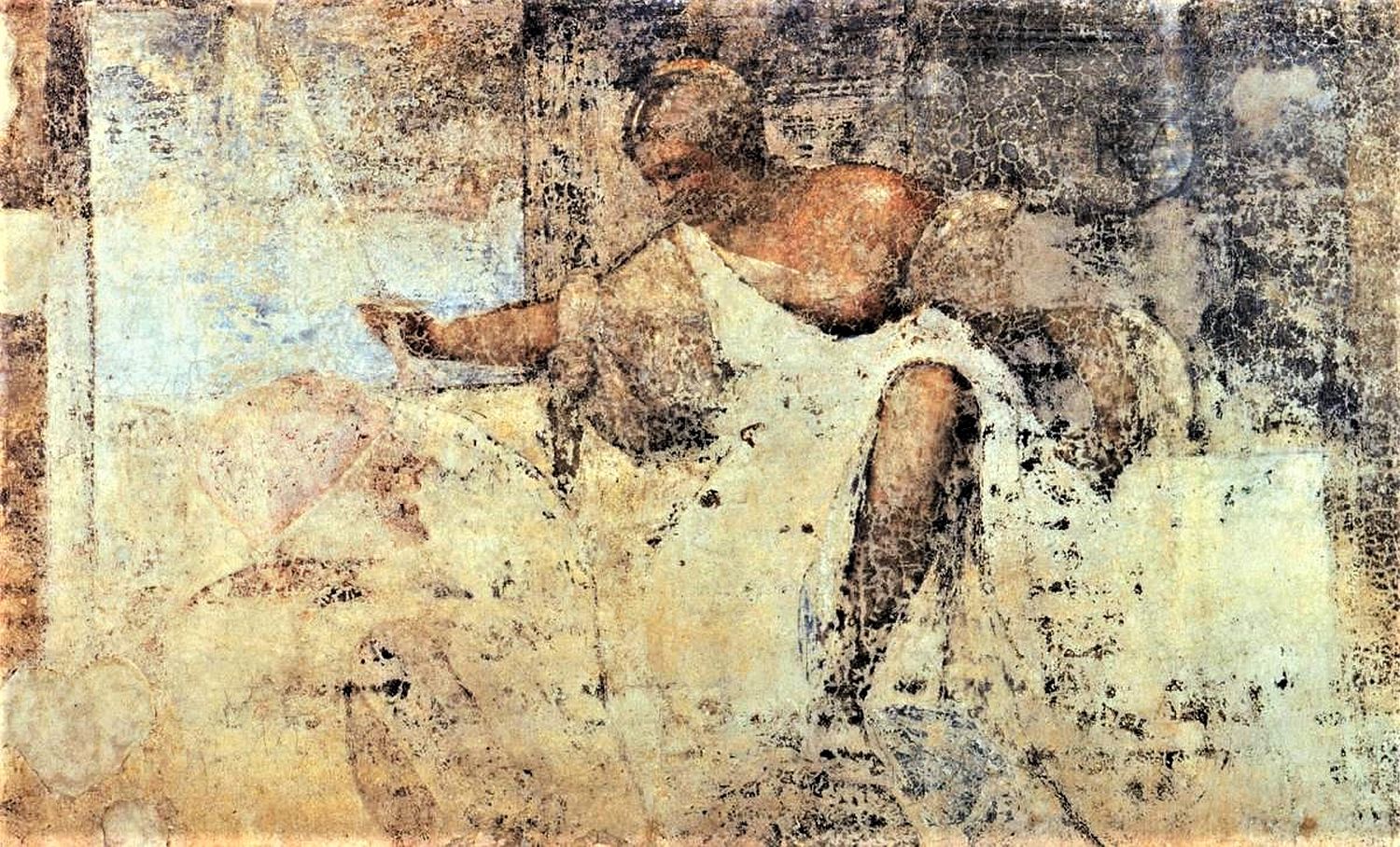 The Alps can be found also in the "Annunciation" (ca. 1522), today preserved in Scuola Grande di San Rocco. The figures in this painting are elegant, refined, the fingers are long and tapered, the faces are graceful. The scene is framed by elements of Renaissance architecture; behind, a luminous landscape opens up, with mountains interrupted by columns, which create a realistic perspective. 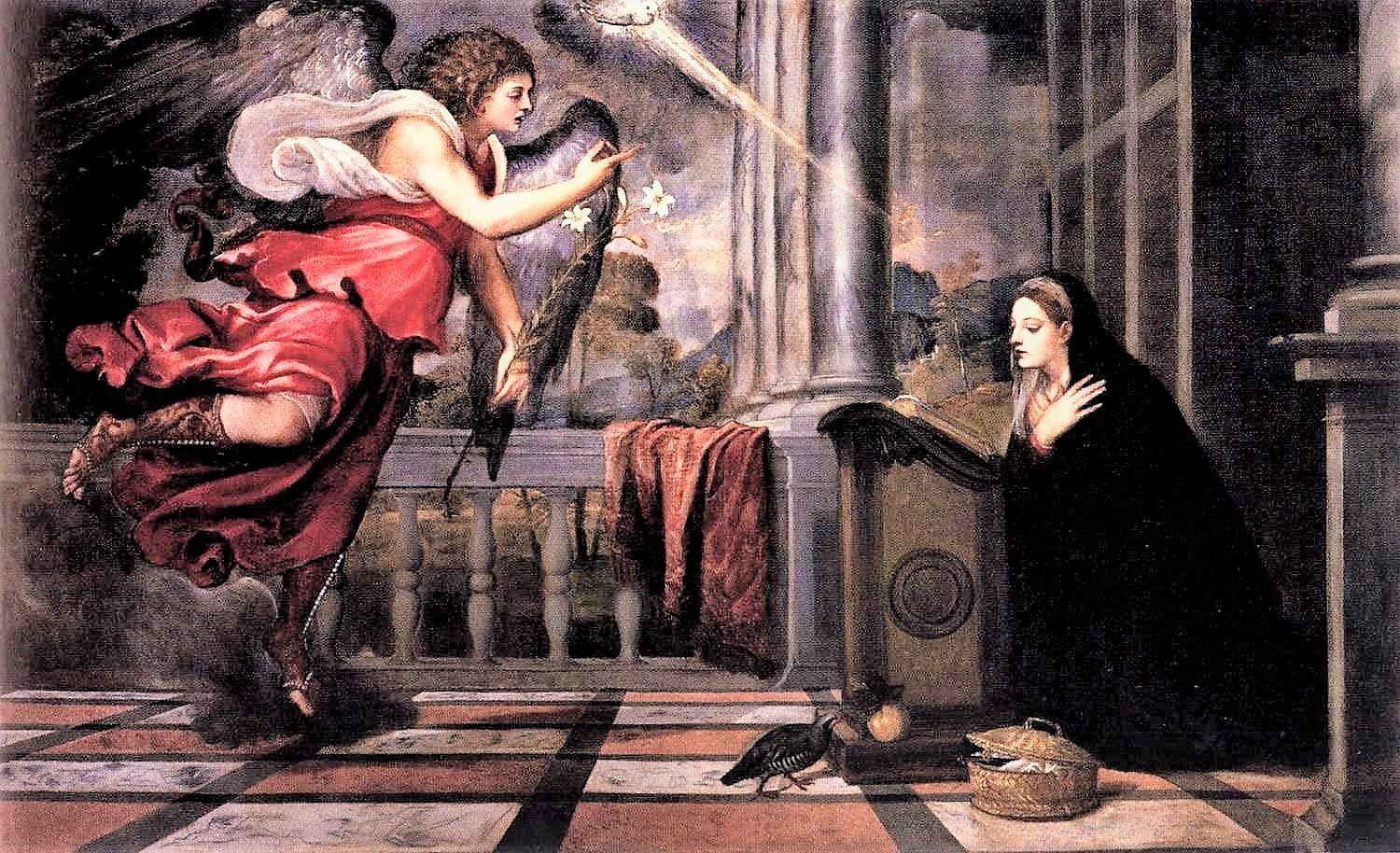 In the Doges' Palace Titian painted a fresco representing "St. Christopher" (ca. 1523): in the background the sharp mountains almost fade away... they cannot stand the comparison with the gigantic figure of the saint, who is represented in the foreground as he crosses the Lagoon, looking up at baby Jesus, holding a long stick, impressive in his bright colors and powerful muscles. In the background, on the left, we can admire St. Mark's bell tower, representing Venice, where Titian became so famous as the official painter of the Republic, whereas on the right we can notice his Dolomites, which stand for his childhood: two pieces of landscape that suggest two different phases of human life, and of Titian's life in particular, almost as if he wanted to represent himself as an adult and as a child in a metaphorical way. 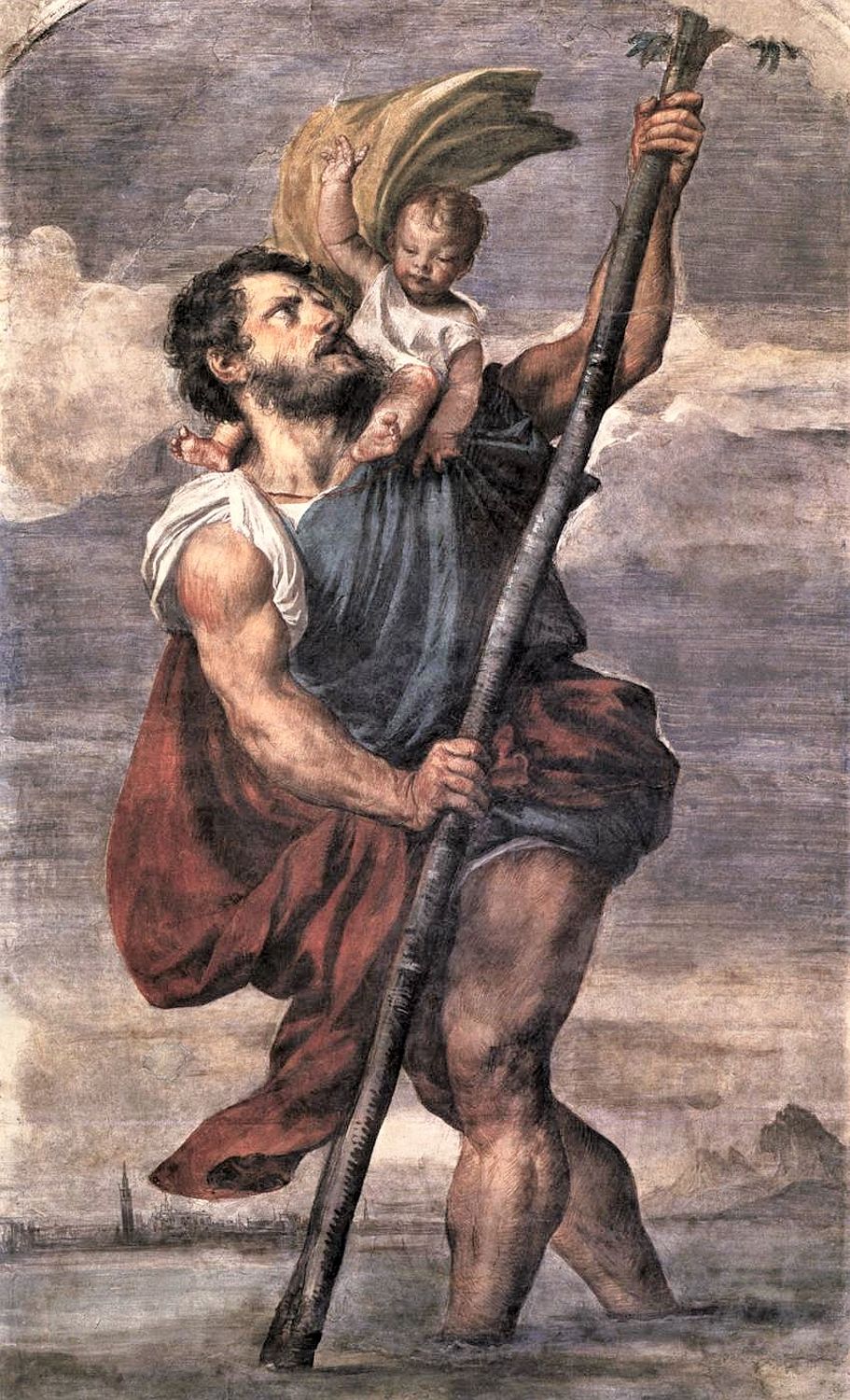 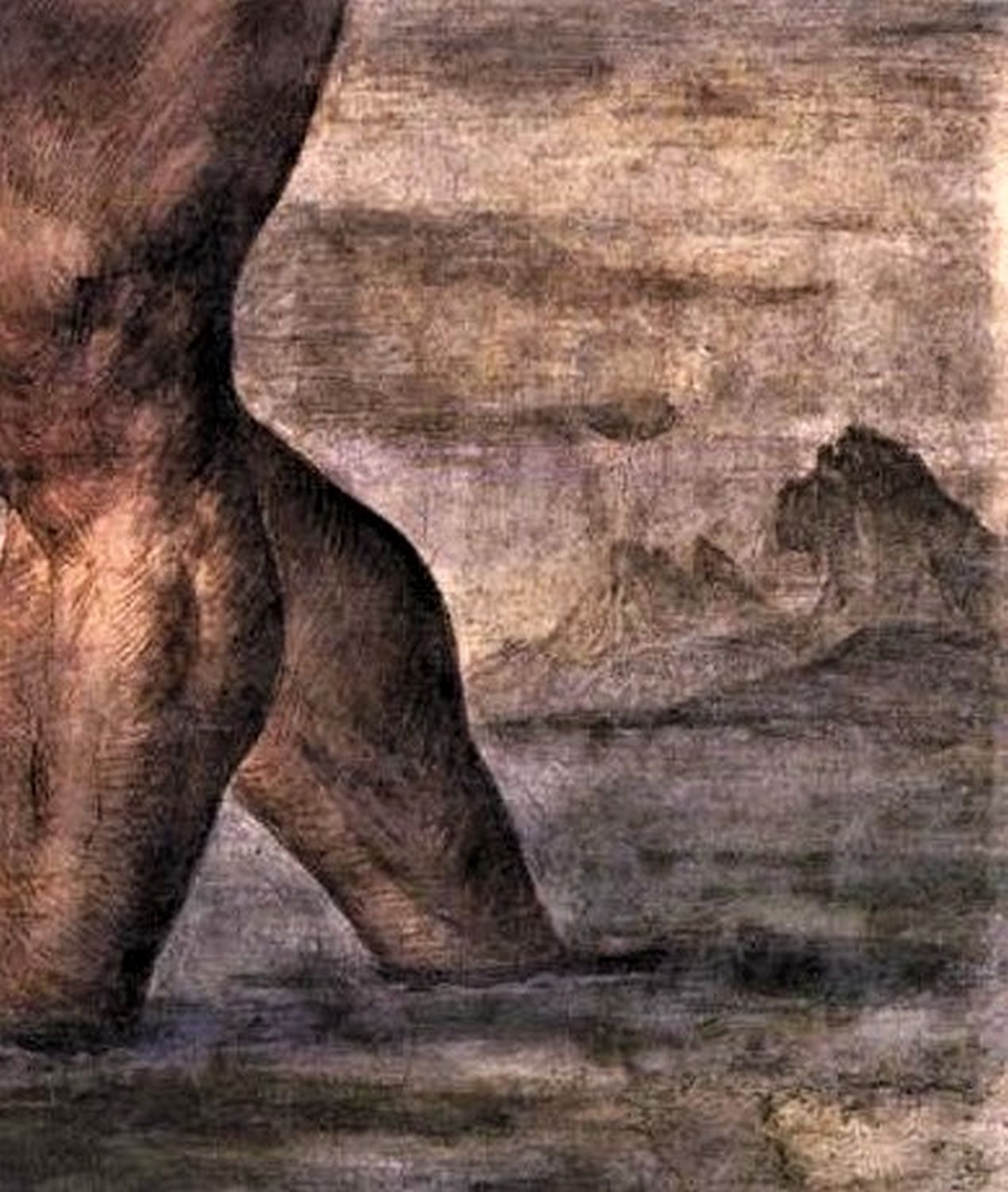 The only narrative canvas painted by Titian can be found exactly on the same wall for which it was projected: the Hostel Room of Scuola Grande della Carità, which is now part of the Accademia Galleries. In the "Presentation of the Virgin Mary to the Temple" (1534-1538) we can see a particular landscape that includes refined classical architectures and an obelisk. 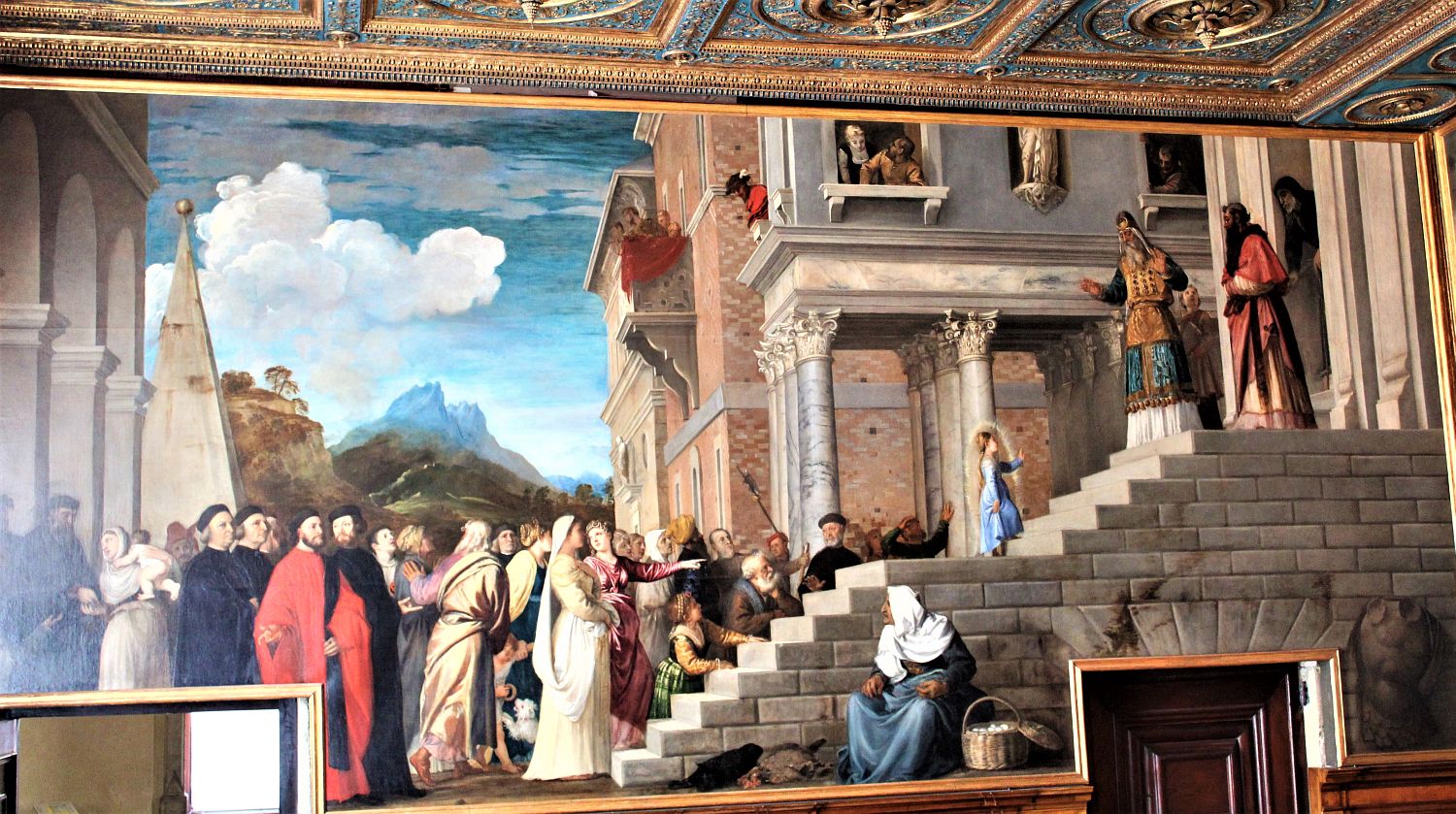 The Presentation of the Virgin Mary to the Temple

The focus of the painting is the Holy Mary, who climbs up the staircase alone, with several people looking at her at the footsteps of the staircase itself. Among them, we can recognize Ann and Joachim, Mary's parents, painted by the master on purpose perpendicularly to the mountain tops which stand majestically against a light blue sky with white clouds. The landscape here is wide, we can almost perceive a sense of infinity. The triangular mountains, in between the earth and the sky, are a symbol of the Virgin Mary, of her being the contact between the human and the divine. In this case they are not a mere element of the landscape, they actually assume a religious significance, which is stressed also by their light blue color, similar to the color of Mary's clothes. 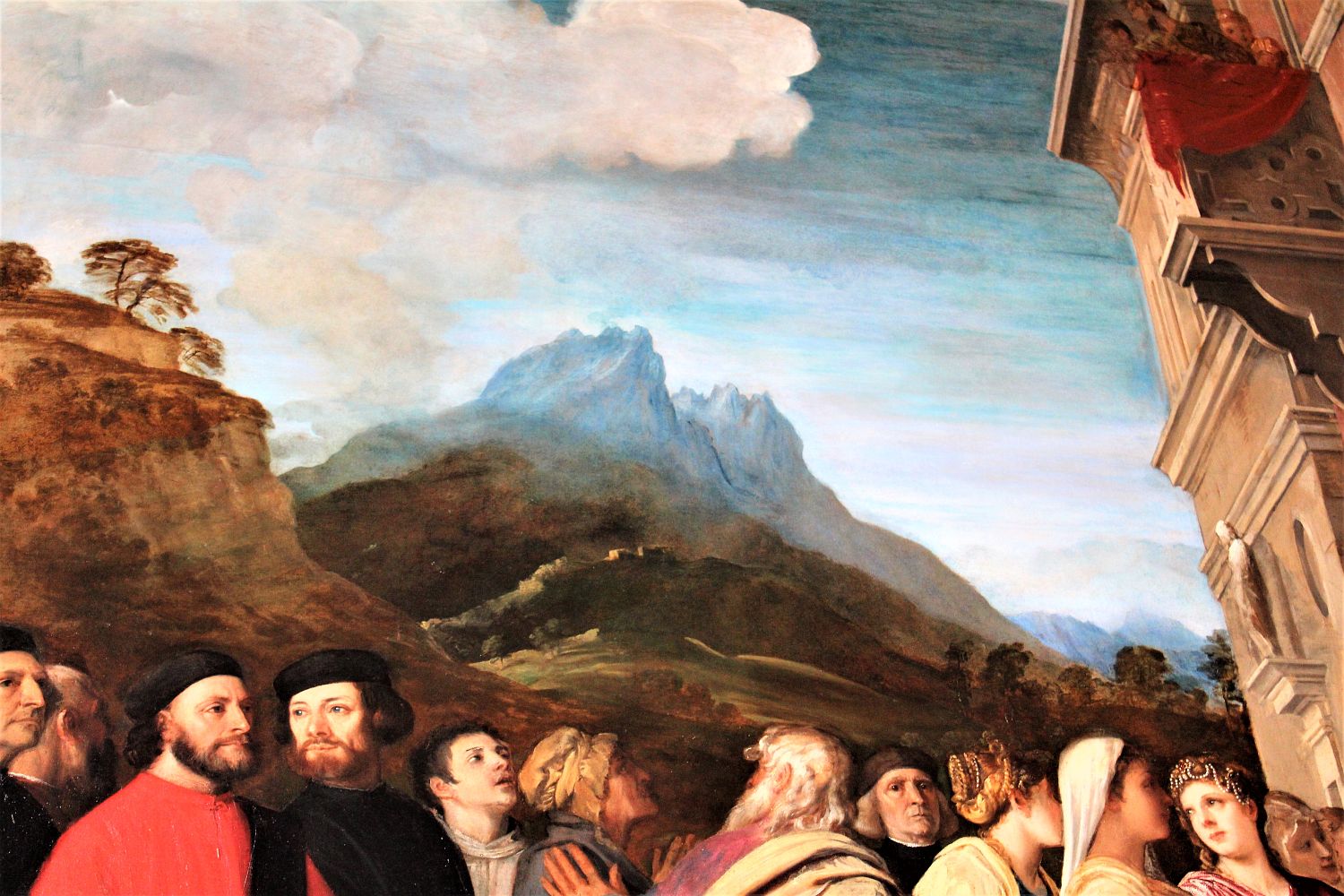 The Presentation of the Virgin Mary to the Temple, detail with the mountains


Another interesting masterpiece by Titian is "St. John the Baptist" (ca. 1540), at the Accademia Galleries. As in the case of St. Christopher, here as well the figure of the saint dominates the space, underlined by the luminous effects of the light reflected by the mountains and by the water of the creek in the background. 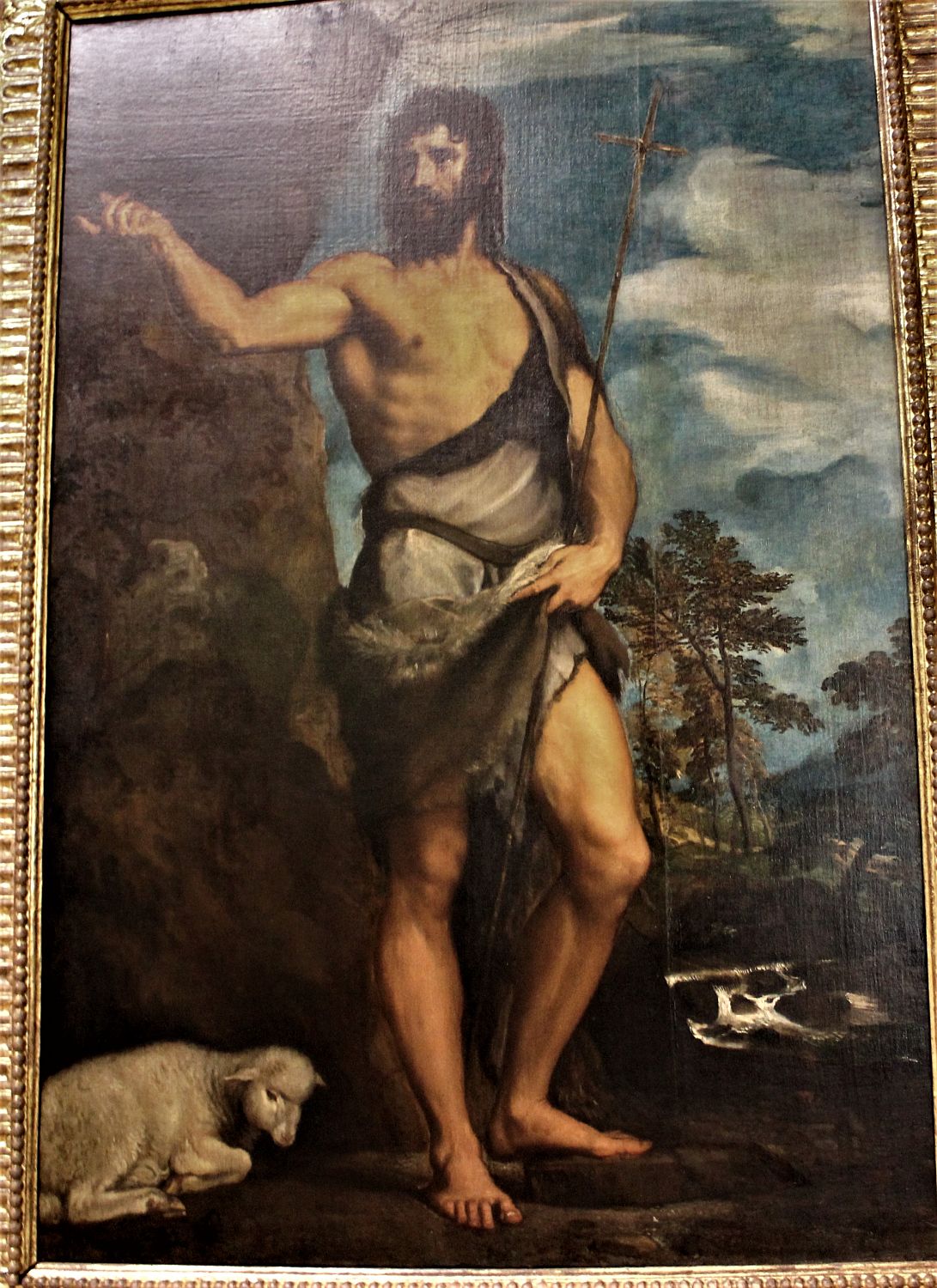 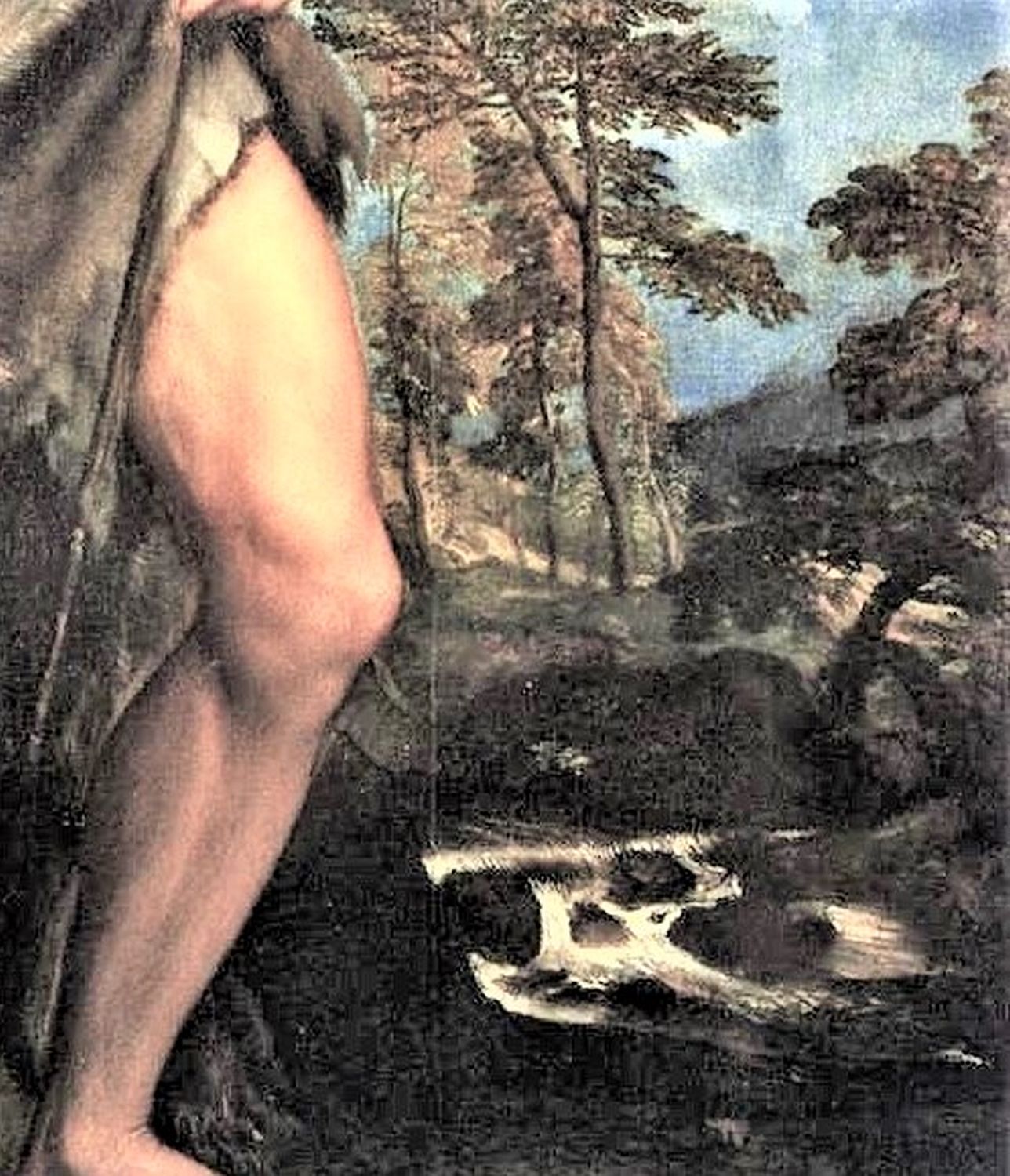 But now let us stop talking... Let us take you to Pieve di Cadore to visit Titian's house: you can admire his wonderful Dolomites for real! 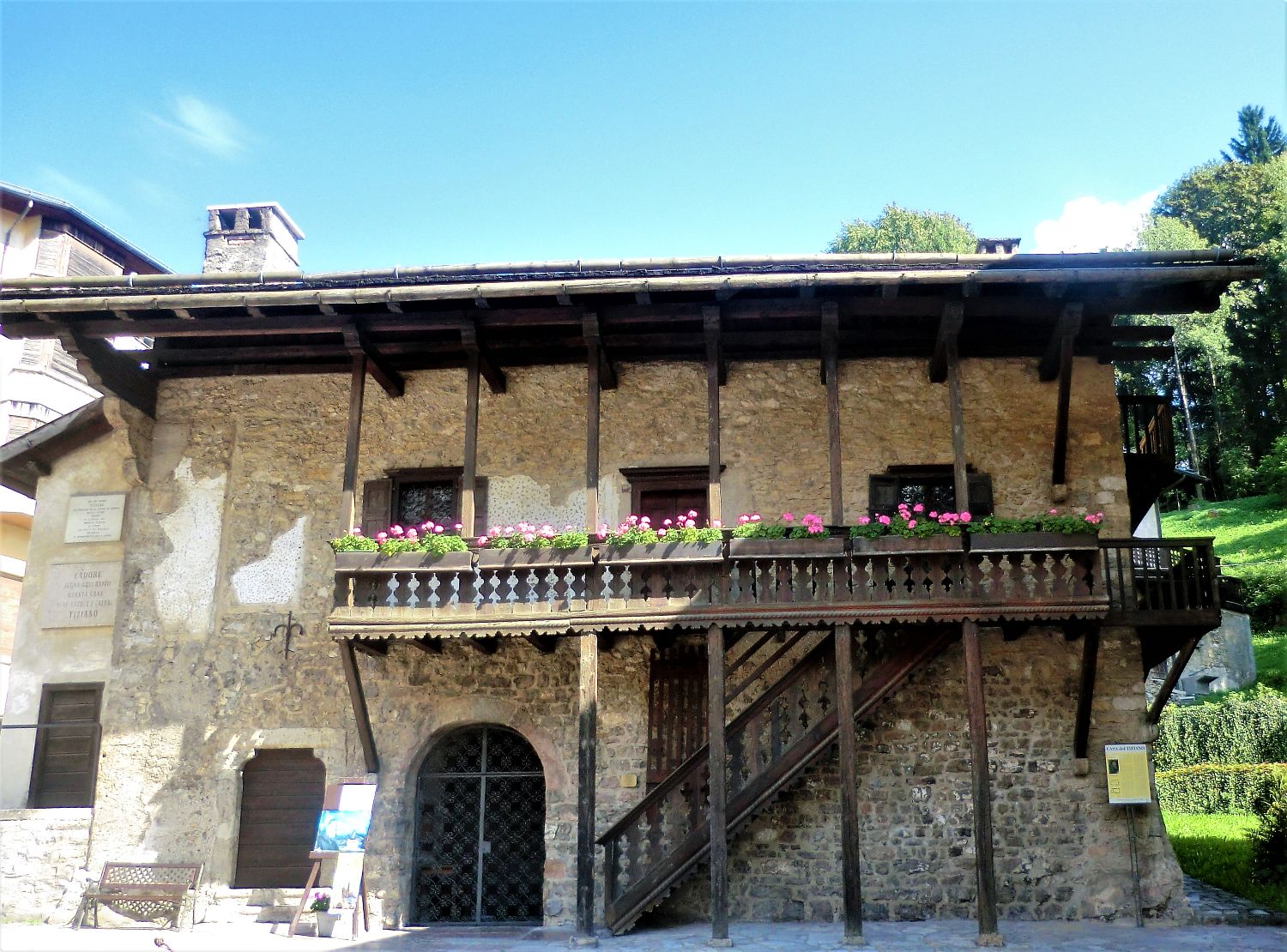 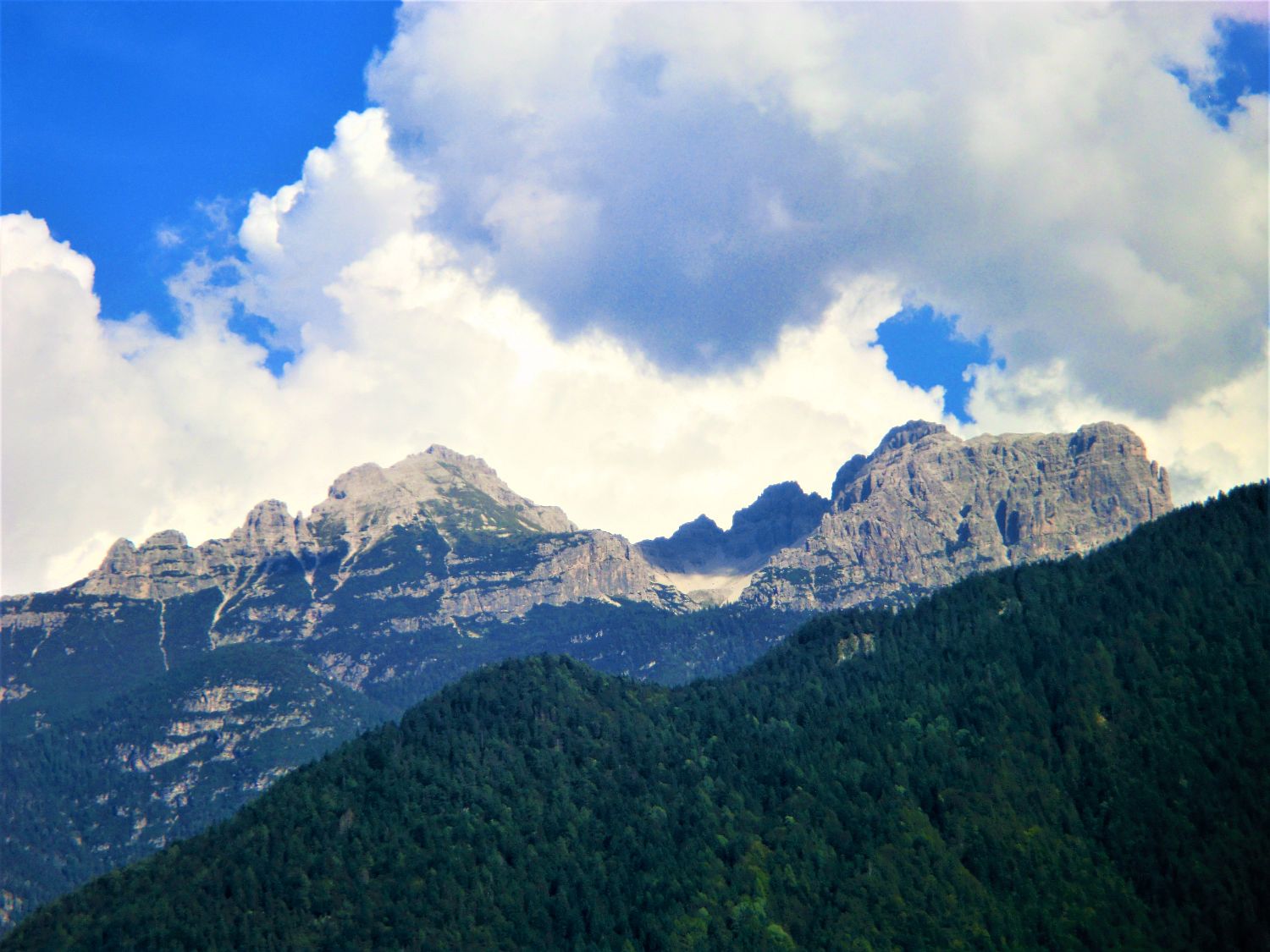 The mountains that Titian loved so much are called Marmarole. They separate the valley of Ansiei di Auronzo from the center of the Cadore area. There is a very difficult hiking trail called Titian's High Track (Alta Via delle Dolomiti N. 5) that starts from Sesto Pusteria and ends in Pieve di Cadore. This alpine trail is almost like a travel in stages dedicated to Titian.

Well, this enterprise is probably too hard for us... We prefer to leave you in the hands of the great professional alpine guides.

We wait for you for a Venice private tour focusing on Titian’s painting.