The Church of the Holy Mary of Health (Madonna della Salute) in Venice: St. Mark, the plague and Titian.

A masterpiece by the Great Titian

Last year for the Feast of the Holy Mary of Health (Festa della Madonna della Salute), which occurs on November 21st, we wrote a post about the feast itself and the Salute church . This year we would like to “celebrate” the feast with an article dedicated to a major work of art present in the same church: the altarpiece St. Mark enthroned with Saints Cosmas, Damian, Roch and Sebastian by Titian. 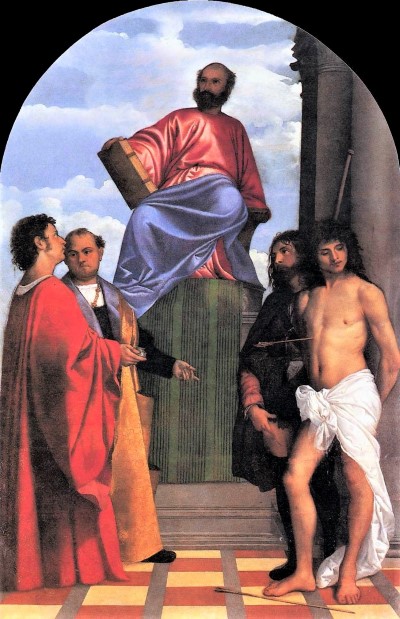 This masterpiece was painted by young Titian in 1510 for the Church of the Holy Spirit, which was located on the island that bore the same name. After the religious order of the Augustinians, to whom the church belonged, was suppressed, this altarpiece was moved, in 1656, to the great Sacristy of the Salute church. 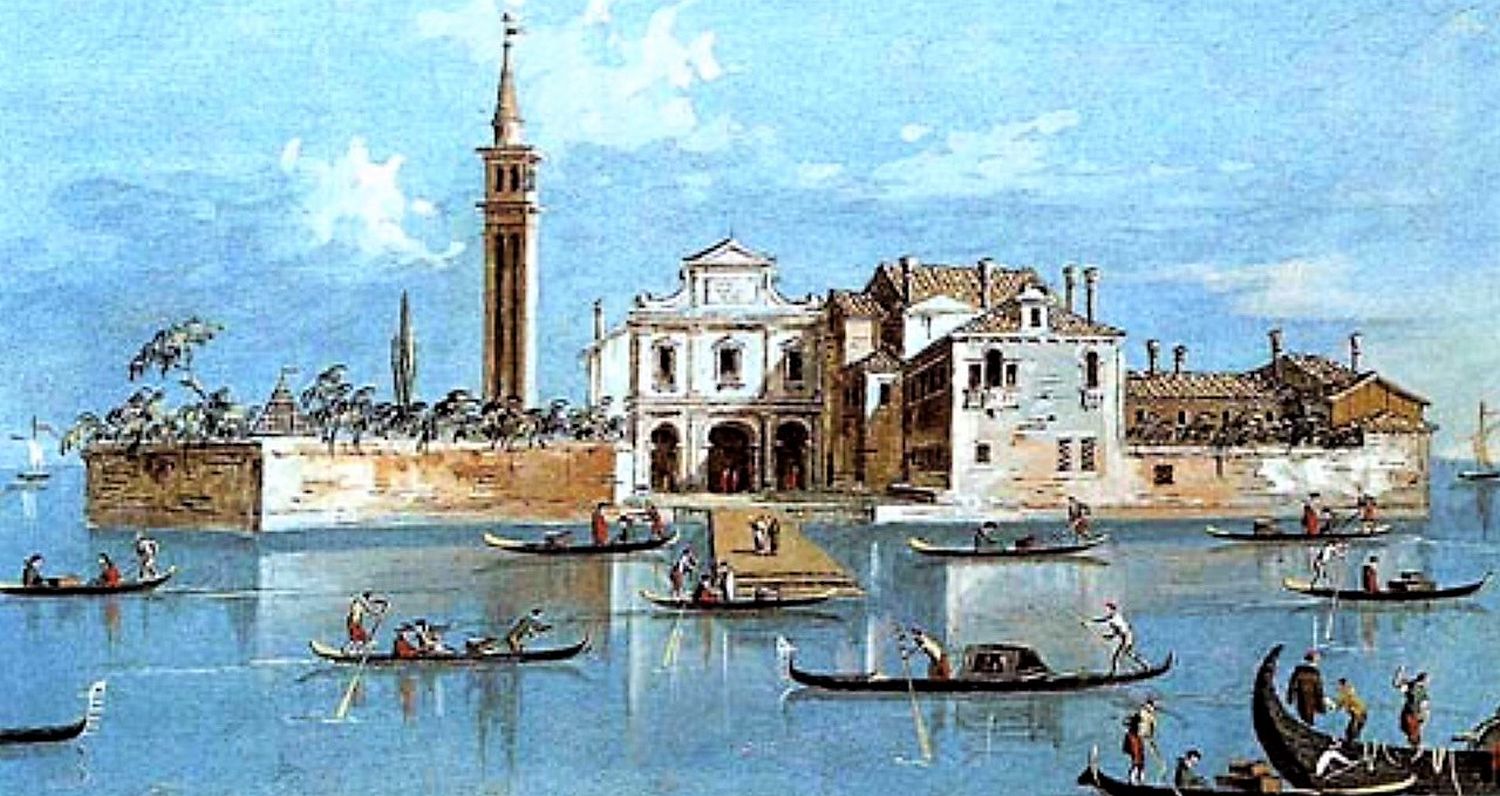 Ancient image of the Island of the Holy Spirit (from the website isoladisantospirito.it)

Titian’s altarpiece was painted in order to implore the end of one of the frequent epidemics of plague that affected the Most Serene Republic of Venice, namely the one that took place in 1509/1510 (during this epidemic the great painter Giorgione died).

It is not the first work of art in Venice where St. Mark, instead of the Holy Mary, is represented in the center. In the Chapel of the Corner family in the Frari Church we can admire the beautiful triptych by Bartolomeo Vivarini, painted in 1474, with St. Mark in the central panel, between Saints John the Baptist and Jerome on the left and Saints Nicholas and Peter on the right. 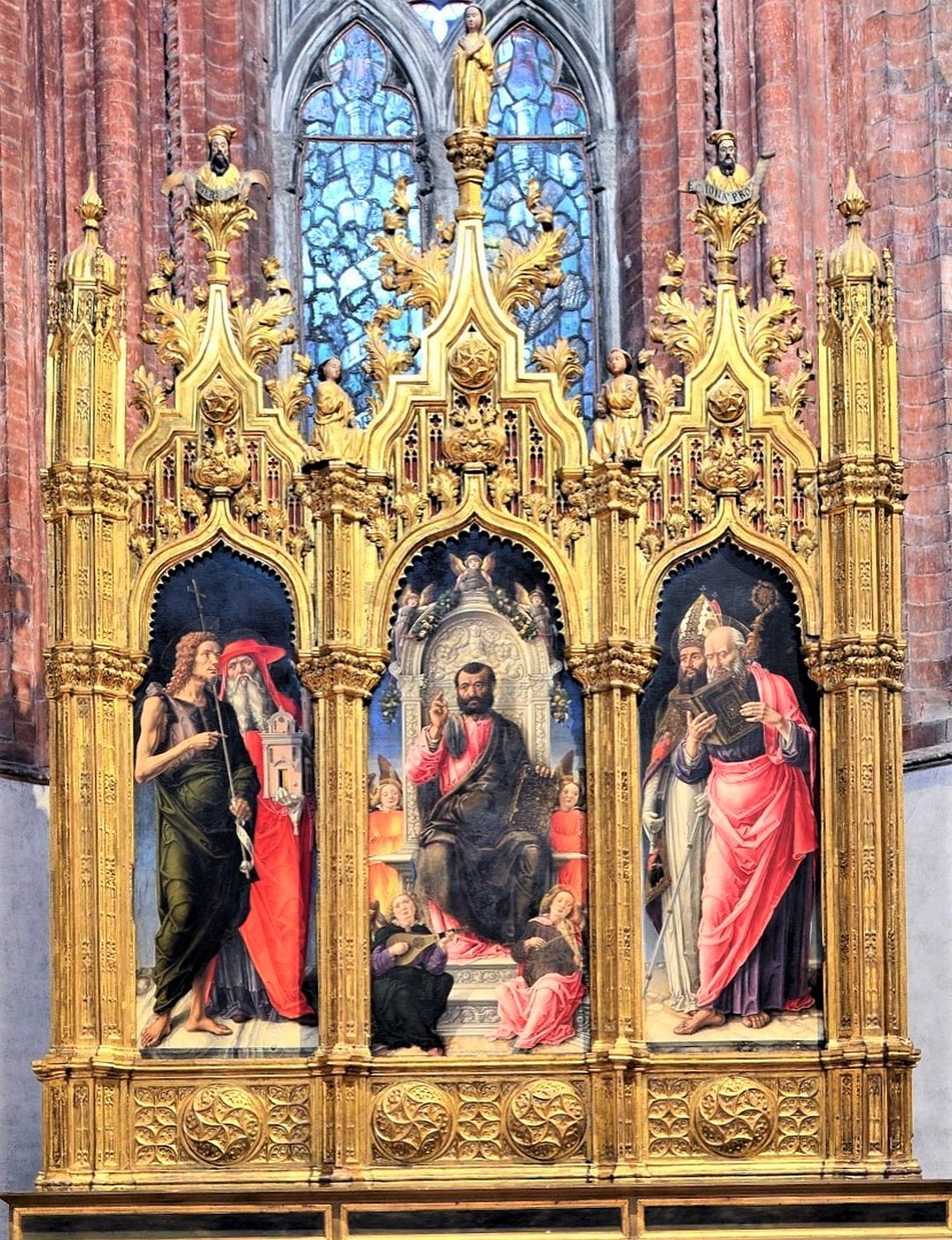 In Titian’s painting St. Mark is enthroned higher up, his gaze looking to some indefinite point. The patron saint of Venice, symbol of the city itself, is painted with his face in shade, as to suggest the dark atmosphere brought to Venice by the plague. 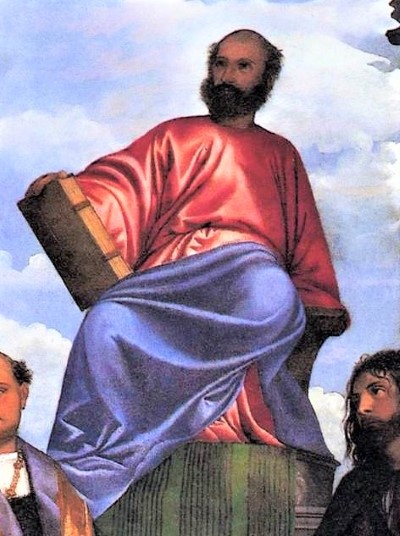 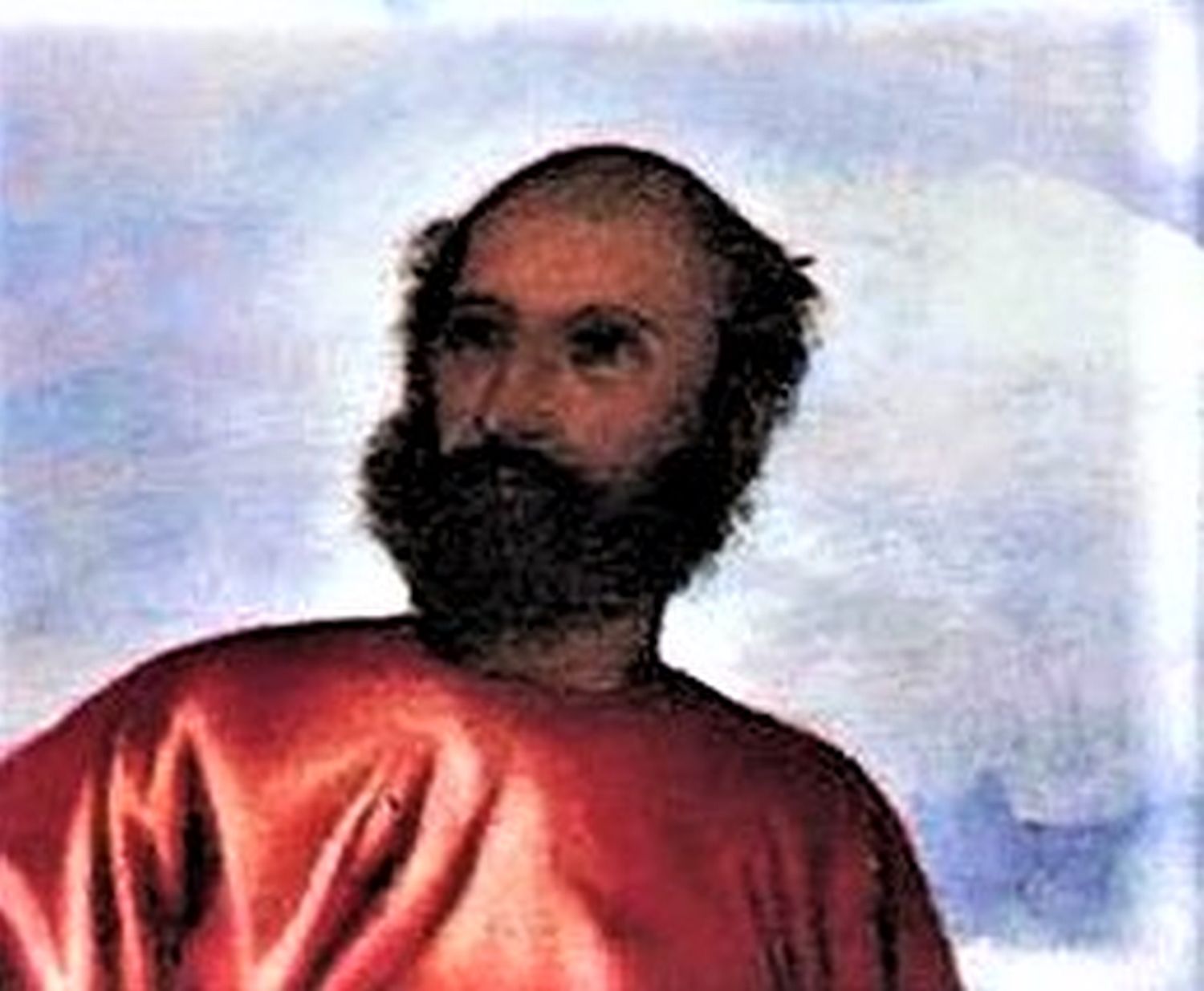 Venice then is asking the Patron Saint to intercede with the four apotropaic saints for the end of the epidemic. St. Roch is represented according to the classical iconography, as he lifts up his clothes to show the sore on his leg caused by the plague: he caught the disease, but then he recovered from it.

St. Sebastian is represented during his martyrdom, pierced by the arrows, as ordered by Emperor Diocletian. Arrows were the symbols of the plague, and Sebastian then became the saint who could save people from the plague, which would frequently affect Europe.

Saints Cosmas and Damian, who during their lifetimes were doctors, are represented here to make the Venetian prayer more effective: their faith can only be stronger if supported by medical science. 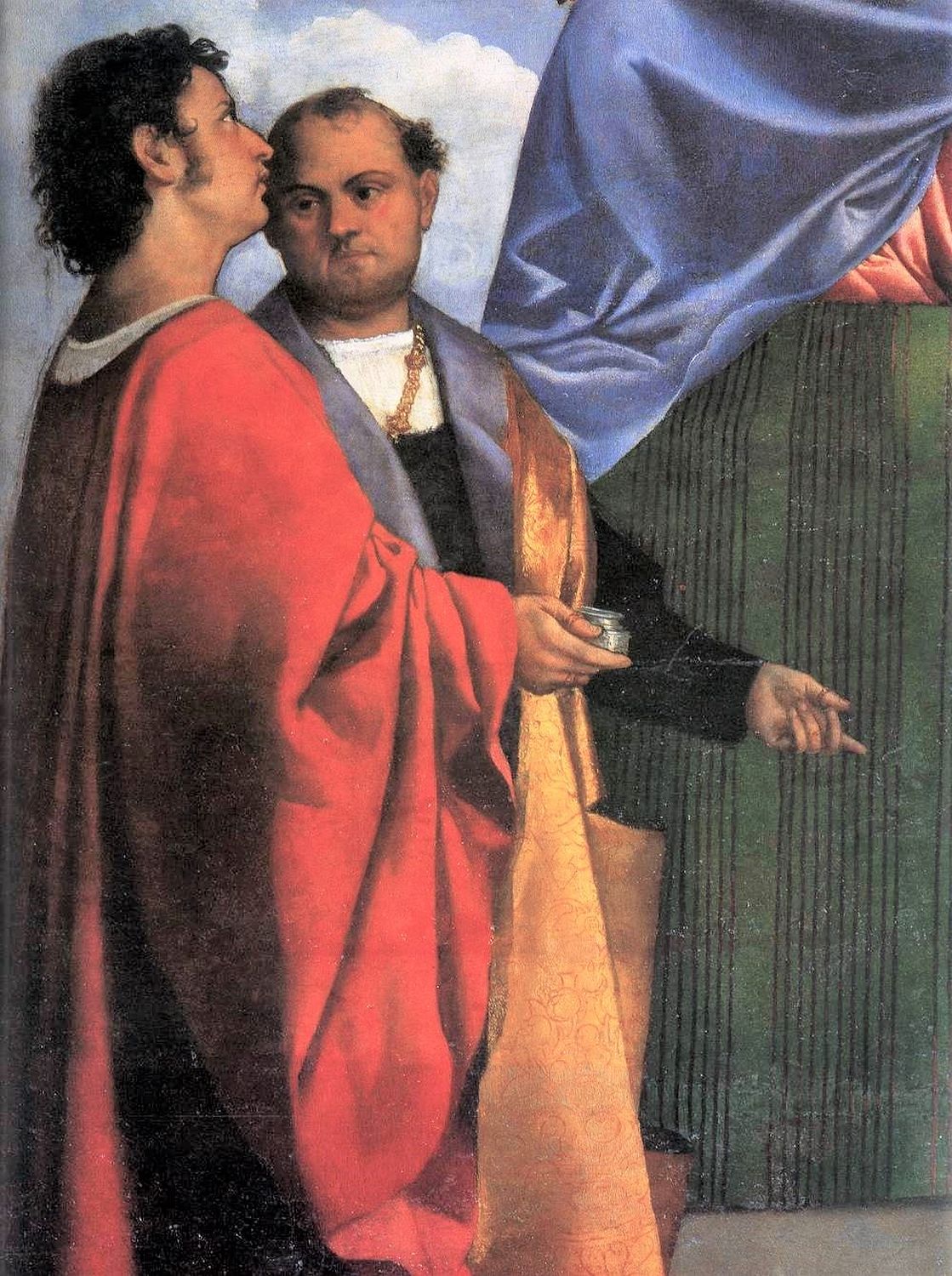 St. Mark obviously occupies a more relevant position than the one of the other saints. As the symbol of the Republic and Patron Saint of the city, St. Mark would be frequently used by the Venetian Government to stress its religious policy: politically not subjected to the Church hierarchies.

This work of art by Titian, then, conveys not only a religious message, but also a political one: Venice was a Christian Catholic Republic, but independent from the Vatican.

Observing the painting from the point of view of the style, we notice the bright colors of the Saints’ clothes, the contrast of light and shade, particularlyconcentrated on the flesh and on the clothes of St. Sebastian. 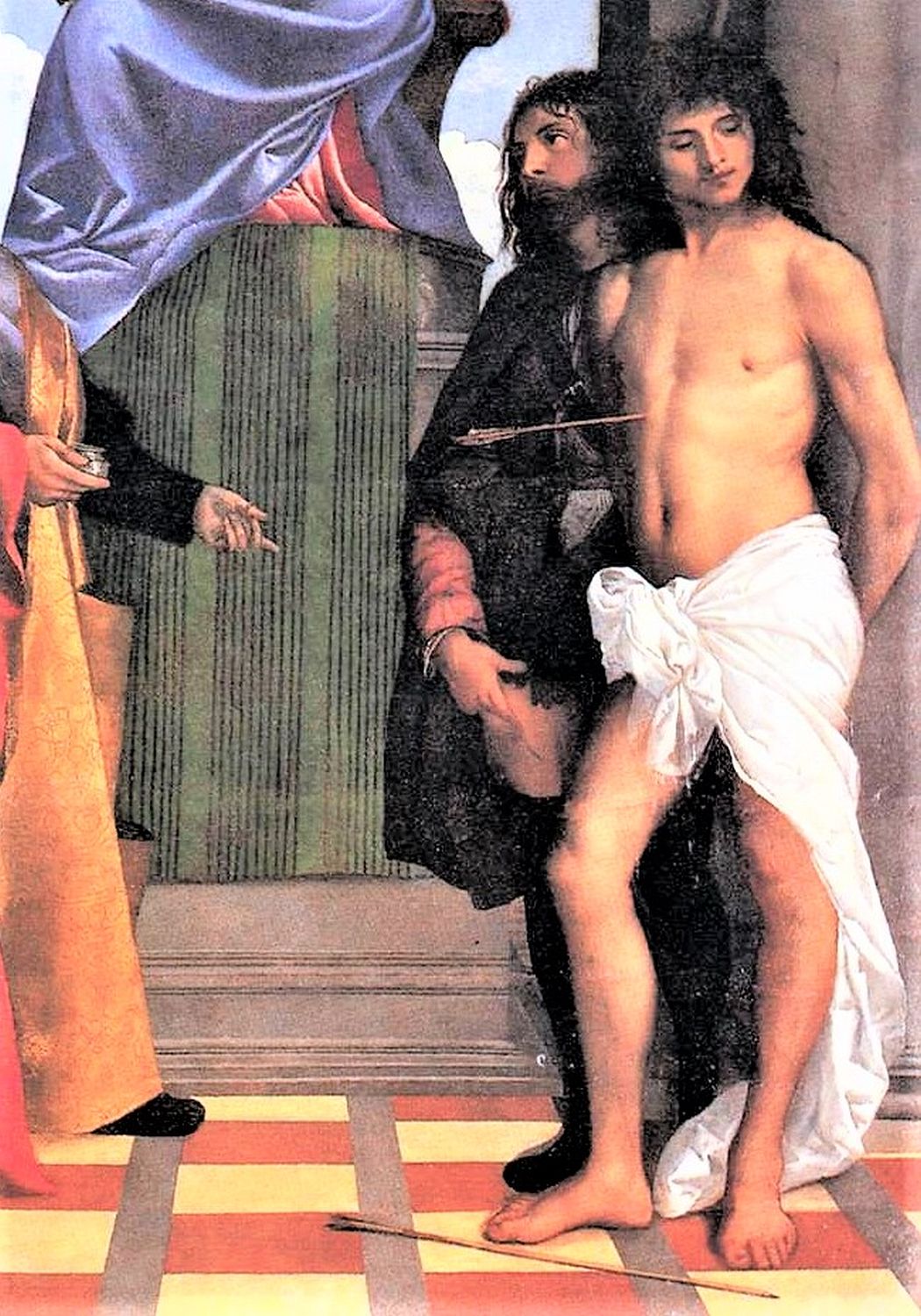 The square tiles of the floor are represented in perspective, which was common during Renaissance. The columns on the right limit the space of the painting, whereas the sky in the background, with its white clouds, evokes an idea of infinity. 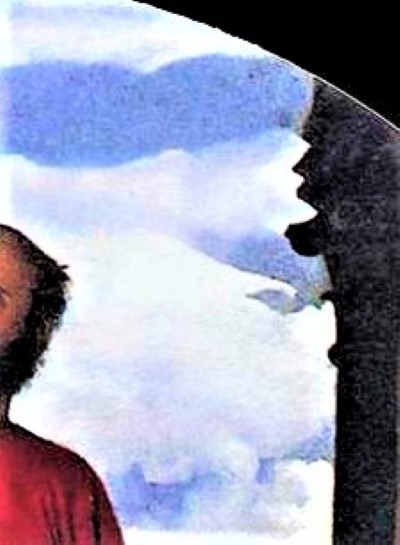 This infinity seems to suggest that not only St. Mark and the other saints, but everyone in general should pray for the sake of Venice.

Let us now wish you a merry Feast of the Holy Mary of Health (Buona Festa della Salute), and let us invite you for a guided tour of Venice, at the discovery of its hidden treasures.

We take leave with a picture of the Basilica on a fantastic background: doesn’t look like the sky painted by Titian in his above described altarpiece? 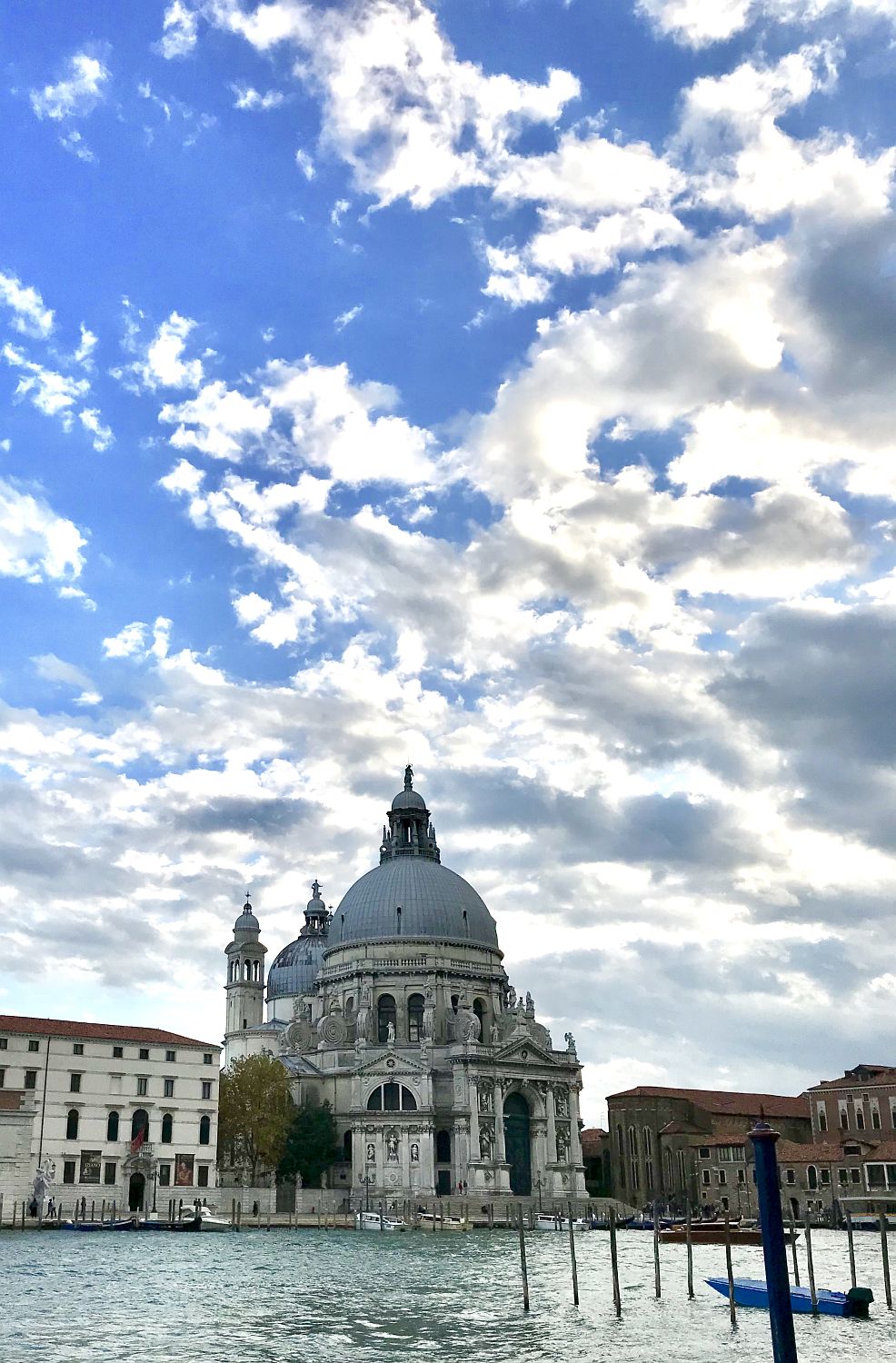