The Clock Tower of Venice

A must see in Venice... The Clock Tower is one of the most photographed, and most admired, monuments in our city, it has become a symbol of Venice itself. 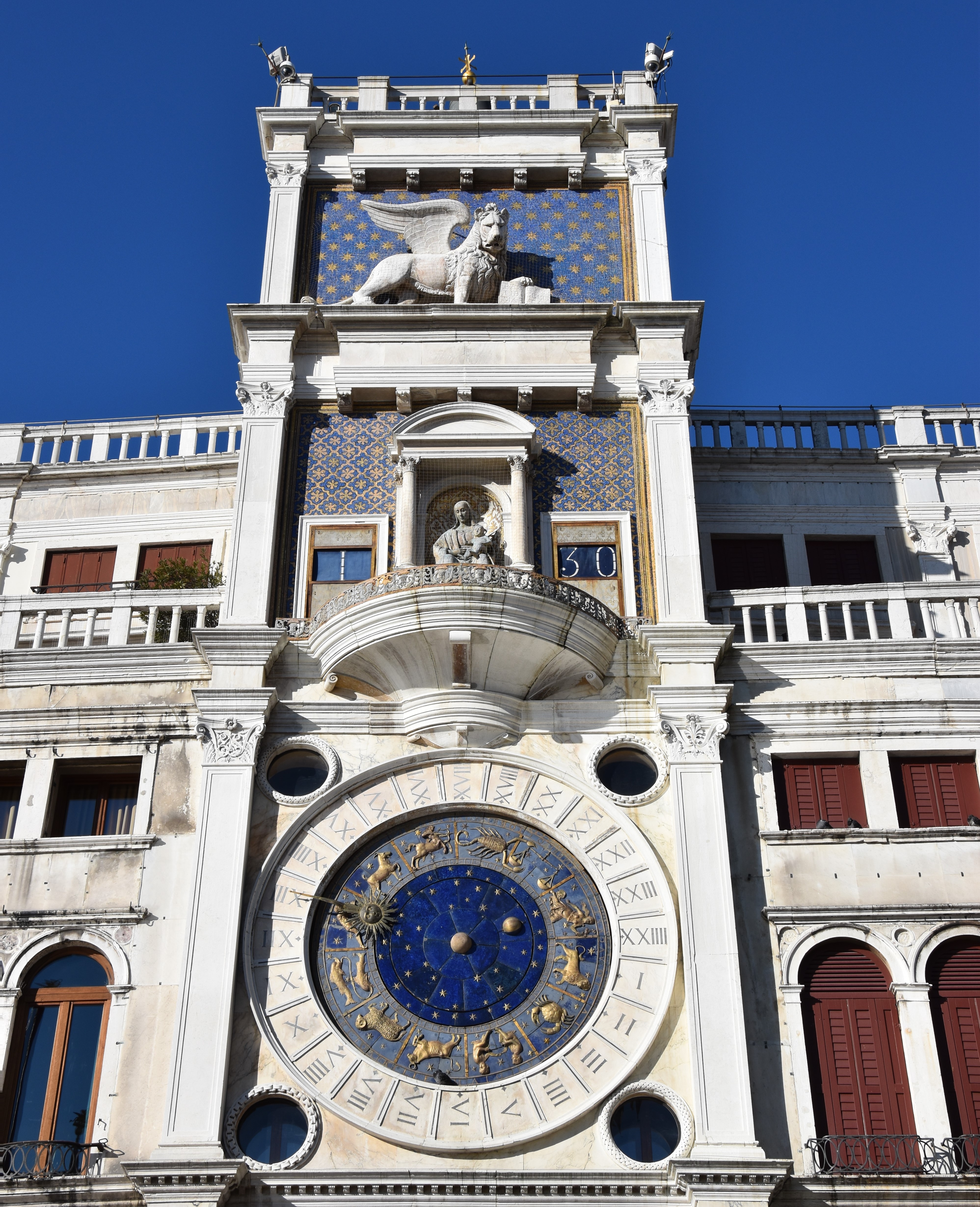 The importance of the site

The structure of the tower was projected by architect Codussi, and, as the historian Marin Sanudo writes, it was inaugurated on the 1st of February, 1499: everybody was captured by its peculiarity and its golden splendor. It was not by chance that the tower was built exactly in that particular spot, where it still stands today. The tower, in fact, thanks to its monumental arch, could allow anyone to spot immediately, from the square, the beginning of the street called Mercerie, which has served all throughout the centuries as the main connection between the political and religious heart of Venice (St. Mark’s Square) and the commercial center (Rialto). 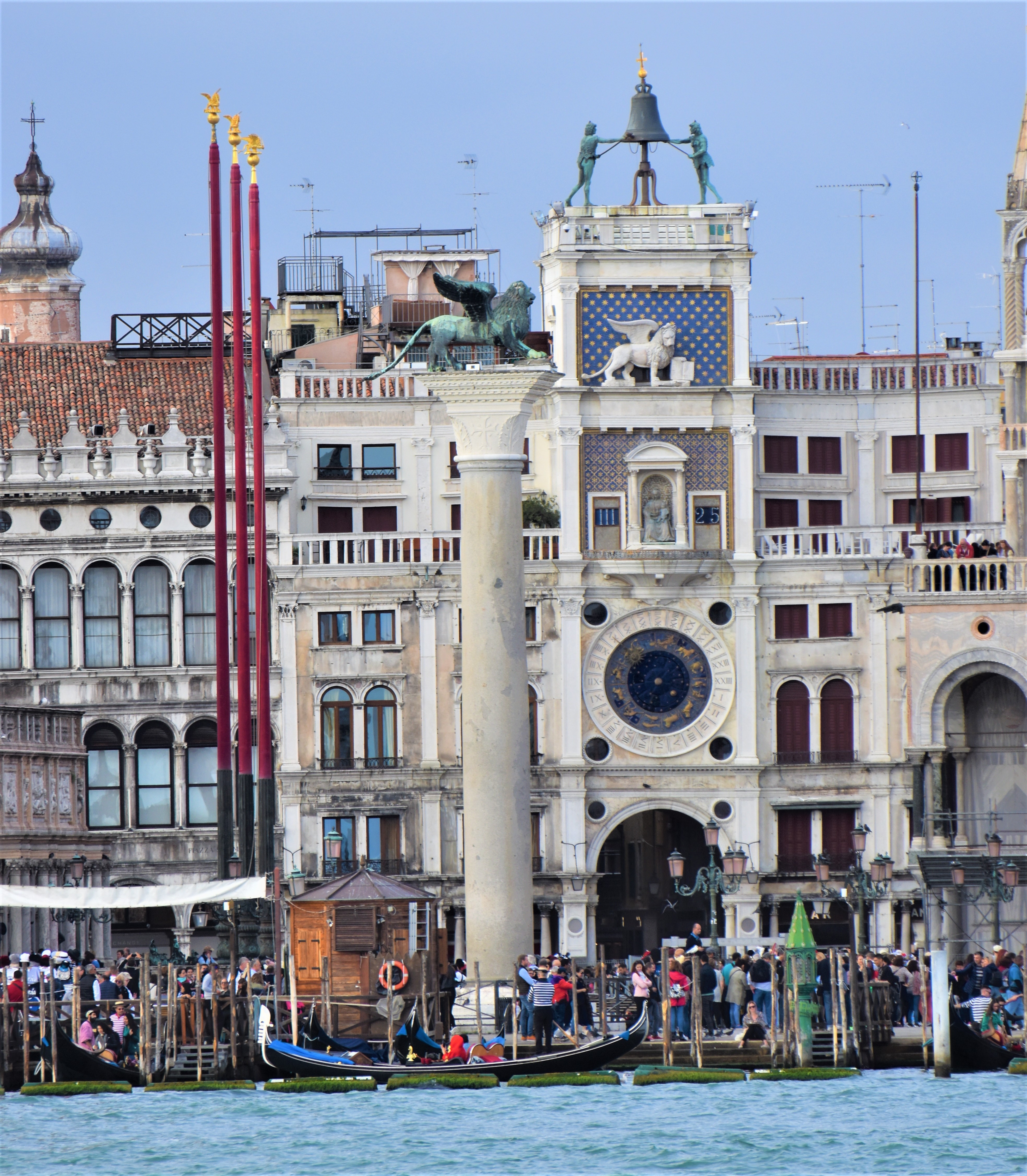 Through the Mercerie, where all sorts of luxury goods could be found, one could easily reach the financial and commercial heart of the city.
Walking in the opposite direction, from Rialto to St. Mark’s, the visual impact at the sight of the square, from behind the arch, was astonishing: St. Mark’s Basilica on the left, with the Doges’ Palace next door, and just a little farther St. Mark’s Basin with its port.

Two giant statues stand in all their importance on top of this monument: the Moors, so called because of the original color they had, having been cast in bronze. From a distance they look the same, but at a closer look it is possible to notice that they are different. One of them has a beard and is called the old Moor. It is the symbol of the past, of the time that has already gone. The other one looks younger: it symbolizes the future, the time yet to come.
Every day, at every exact hour, quite a few tourists stop for a while and look up, to see the two bronze sculptures hit the bell with their mighty hammer. 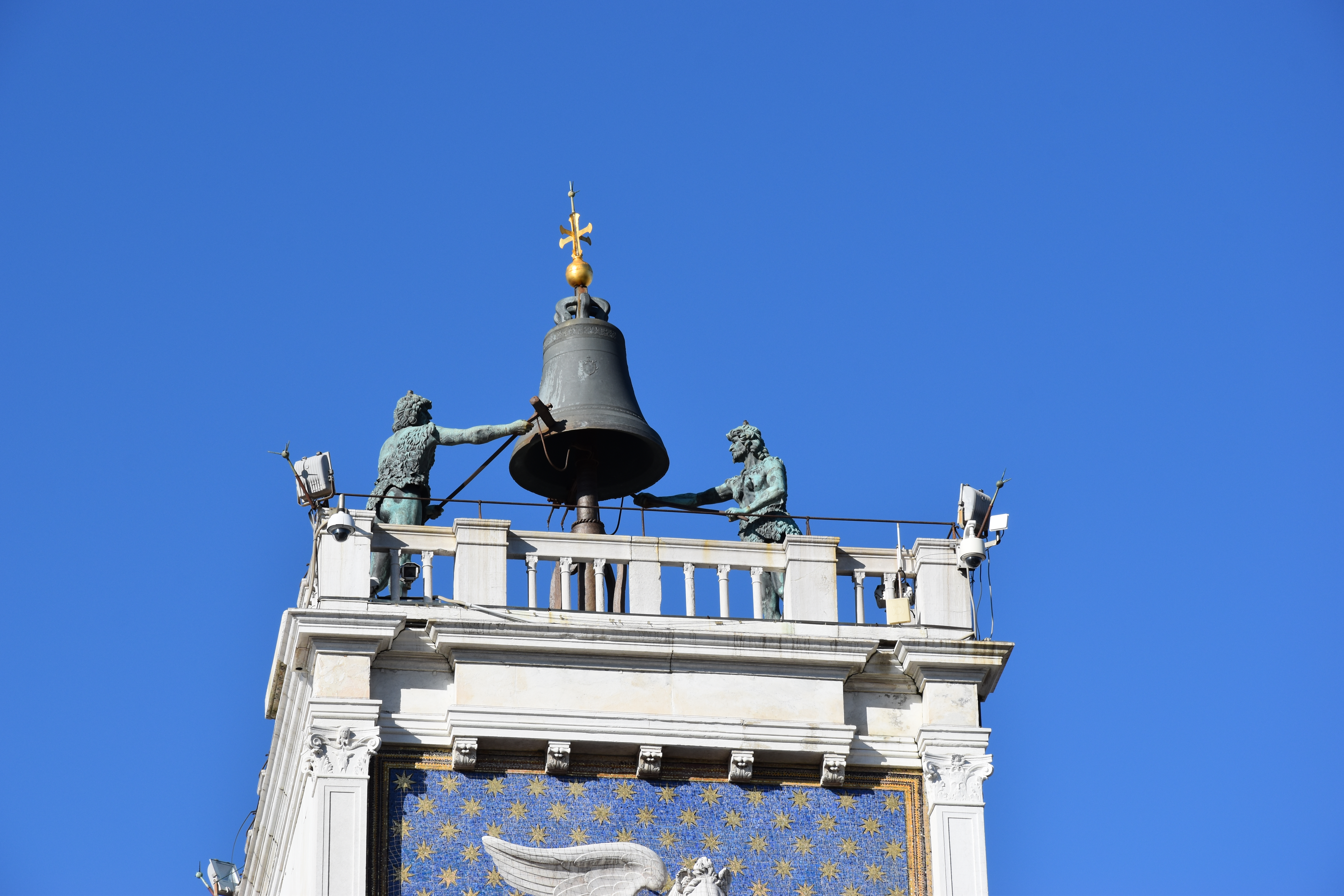 A little lower we can admire St. Mark’s Lion, and right underneath, inside a niche, the elegant sculpture of the Virgin Mary holding Baby Jesus. On Mary’s left we can see the hours, indicated in Roman numbers, whereas on her left the minutes are indicated in Arabian ciphers. 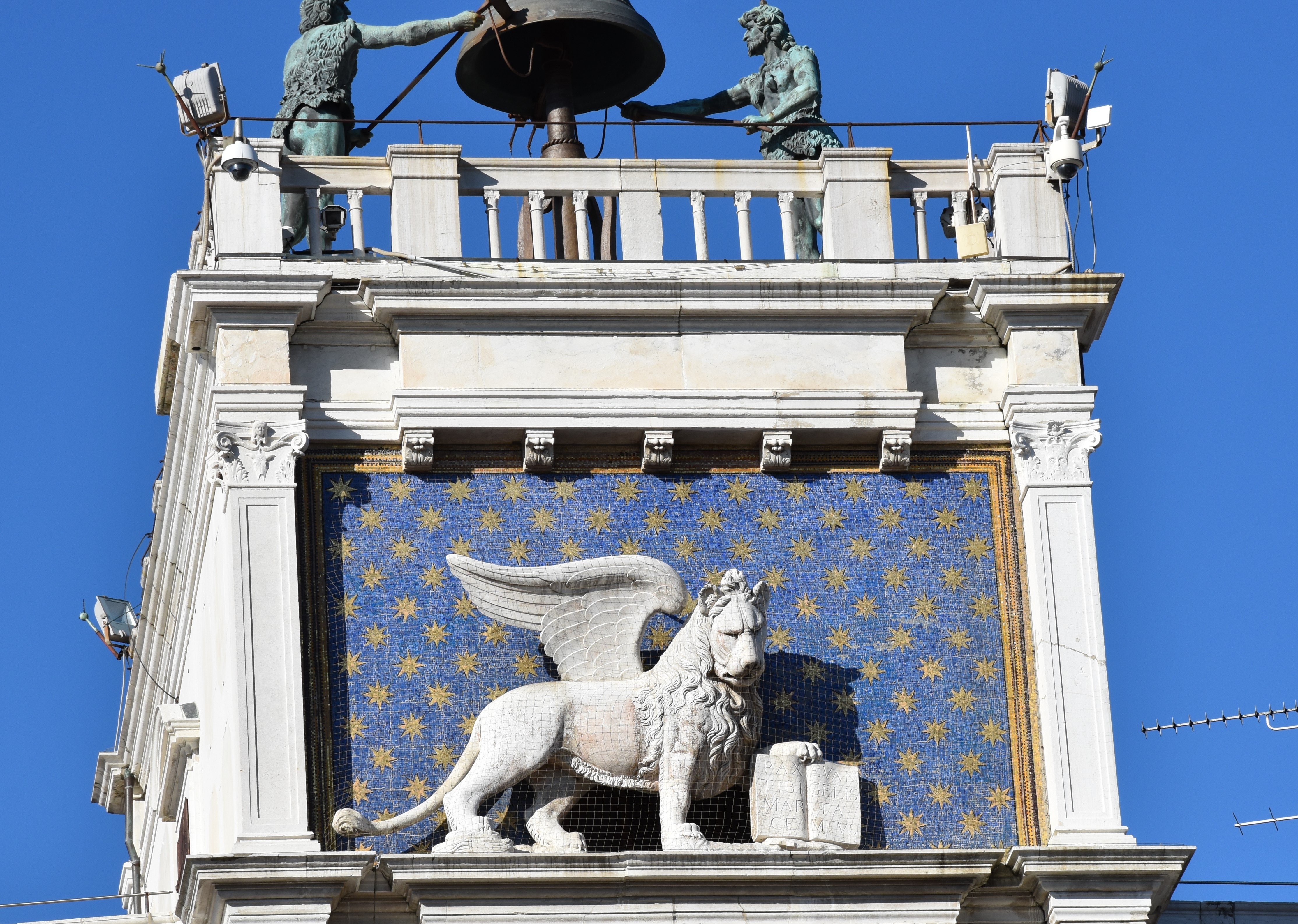 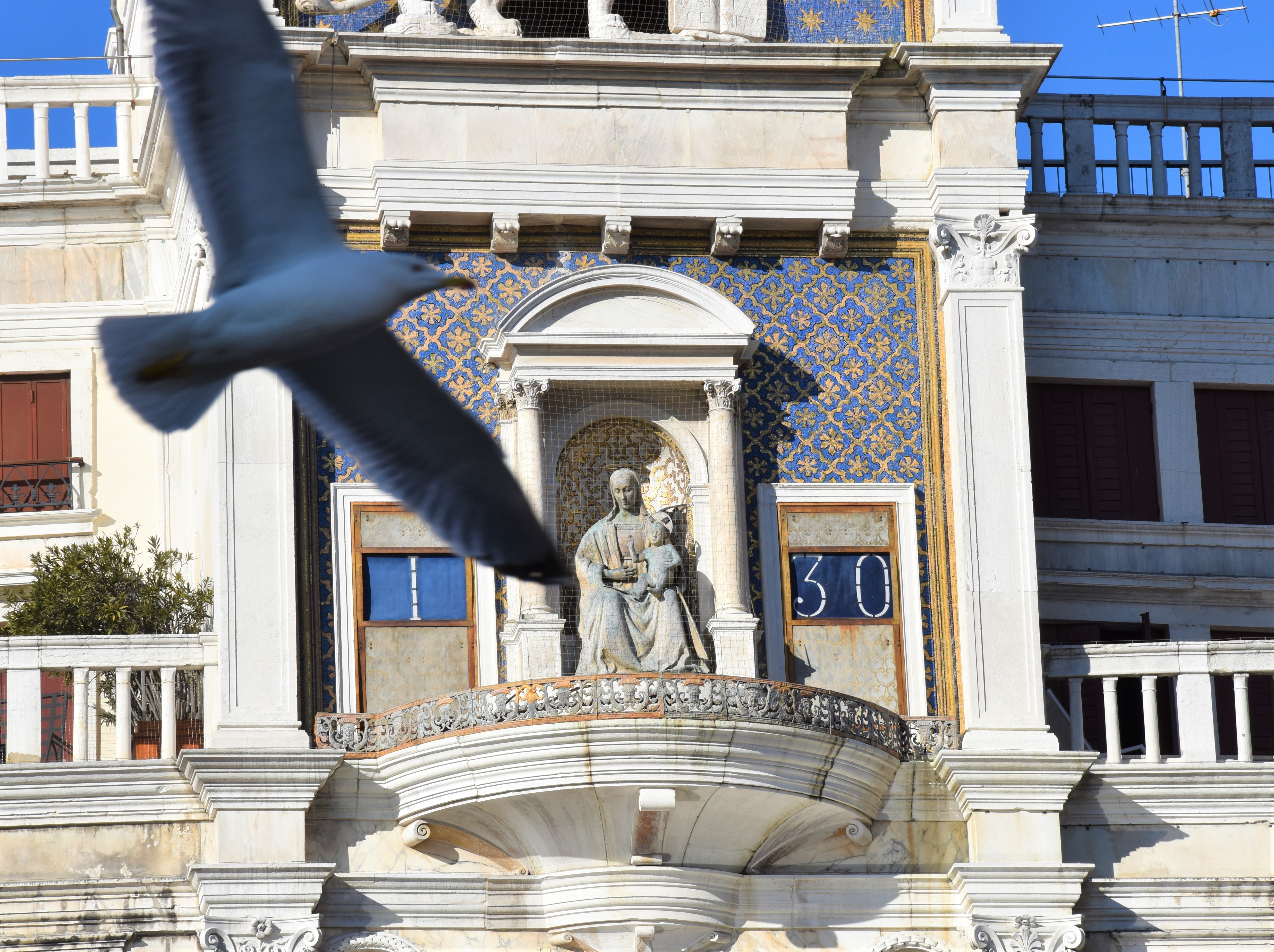 Right above the arch, the different circles of the astronomic clock catch everyone’s attention. It is a real engineering masterpiece. On the outer band the 24 hours are represented, in Roman numbers, while in the central part, on a blue enamel background, we can admire the golden signs of the zodiac, exquisite bronze reliefs covered with gold leaf, the sun, the earth and the moon with its different phases. 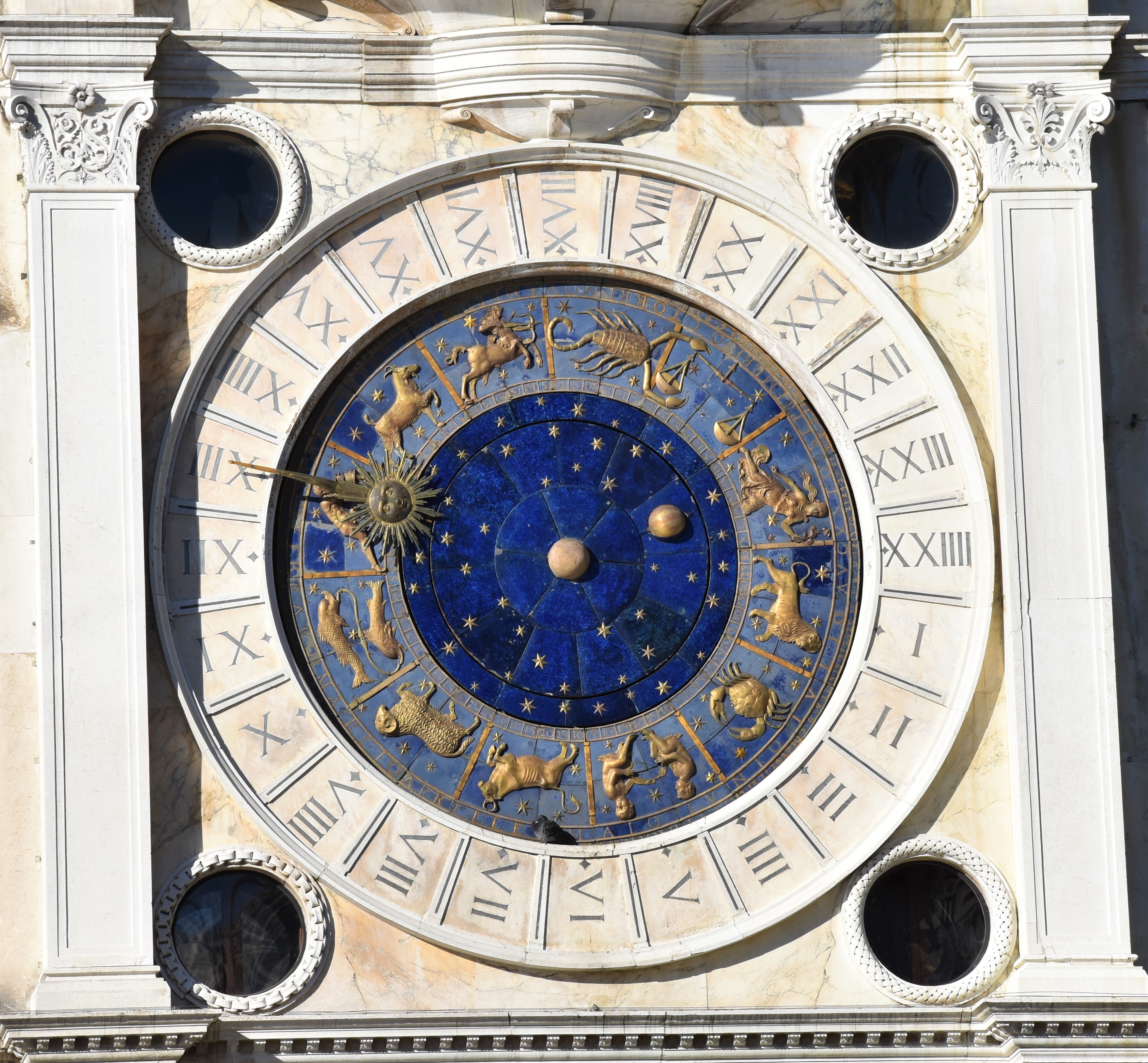 Thanks to a quite complicated mechanism within the tower, everything moves in perfect harmony: the Moors, the hours, the sun with respect to the signs of the zodiac, the moon phases…
But there is even more! During Epiphany and Ascension, at every hour, from the little door on the left of the Holy Mary (the one normally occupied by the hours) an Angel with his trumpet and the three Magi come out, bend in front of the Virgin and the Baby, and then disappear entering the door on the right (which normally indicates the minutes). This is quite a show, not only for the tourists in town, but also for all Venetians: for a few seconds everyone in the square stops, remains silent.
Would you like to learn more about the construction of the tower, the mechanism of the clock, the political meaning of the decorative sculptures and reliefs at the different levels of the façade? Please, contact us! It will be a real pleasure for us to admire the Clock Tower with you and to unveil some of its secrets.
See you!
Contact: info@guidedtoursinvenice.com

Hunting for stars and planets in Venice (section: Tours for kids in Venice)

The stunning view from the Bell Tower in St. Mark's square of Venice (section: Blog)

The best of Venice: what to see (section: Blog)

Saint Mark's Basilica in Venice: the mosaics on the facade (section: Blog)

Magi come out from the clock tower in Venice (section: YouTube) 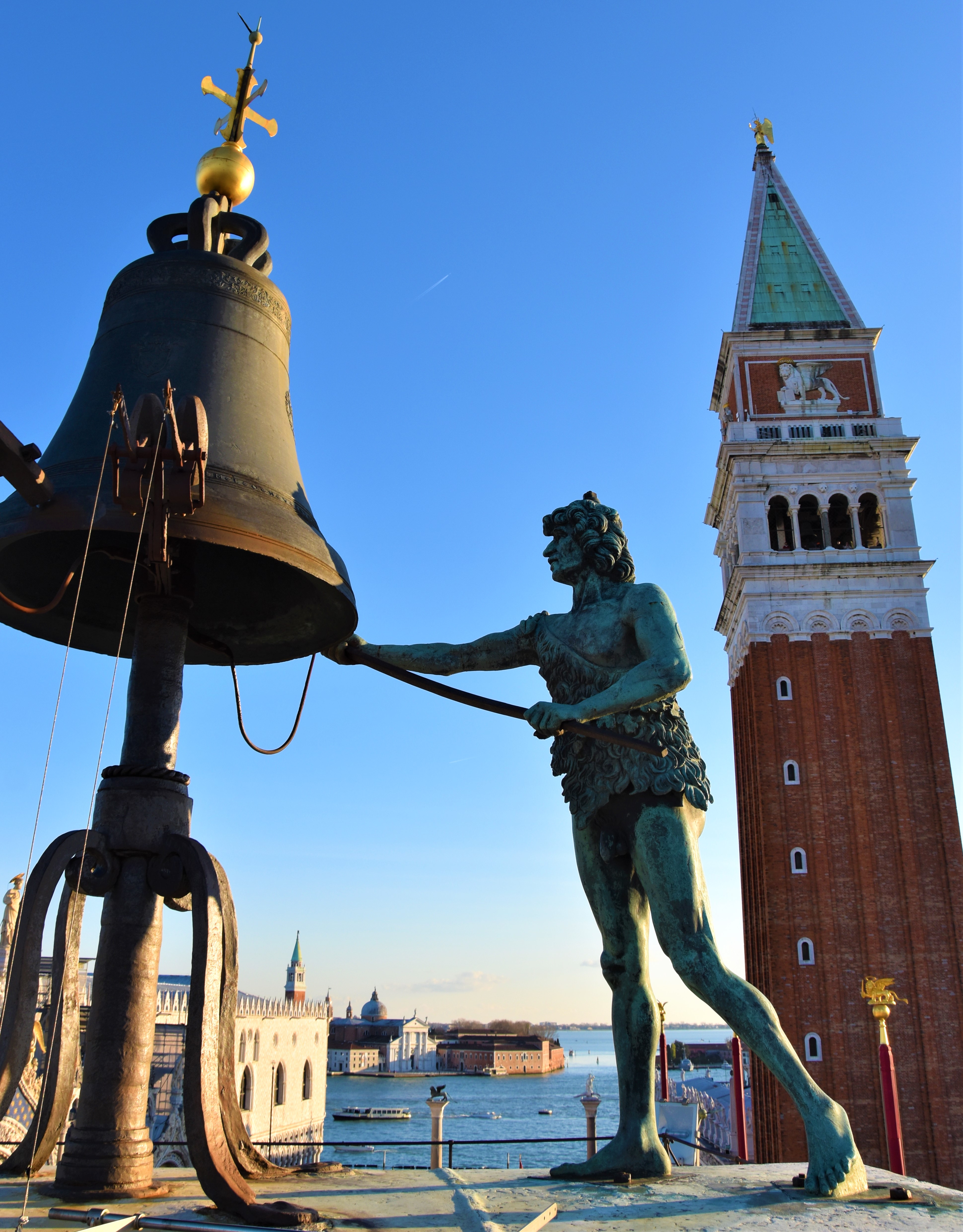