Venice and its legends: Saints, Dragons and Princesses

Hi Kids, are you ready for an incredible legend that will interest your parents, too?

Hi kids! Today we would like to address you, and of course also your parents, who have decided to take their children to Venice. We've got a story about dragons and princesses to tell you. Our Venice is full of real stories, fairy tales and legends that anyone can enjoy, even the little ones.
Anyhow, you will not hear this story directly from us. We have in fact invited for you an exceptional "illustrator", a person who tells stories using his brushes.
Here he is. 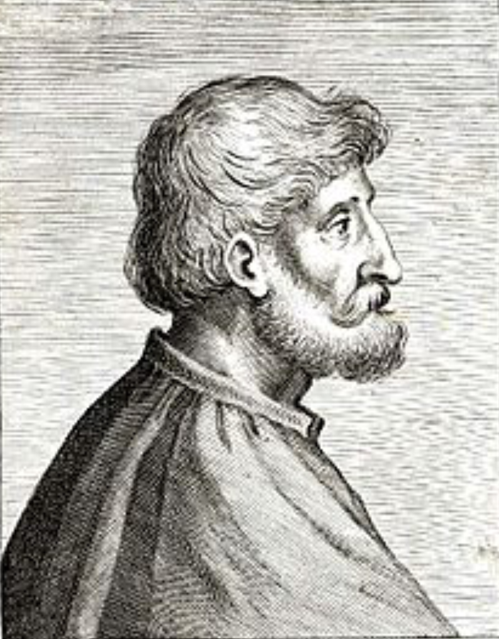 "Hi there! My name is Vettor Scarpassa... Yes, I know, it doesn't sound nice... That's why I have decided to change it into Vittore Carpaccio. Much better, don't you think so? Yes, Carpaccio, exactly like the famous raw meat dish (or also fish, actually). What an honor to have a dish named after your own name. Bellini had the same honor: one of the most popular cocktails in the world bears his name! Just think how envious Titian must be... Sorry, I almost forgot the reason why I am here... Oh, yes, I recall now!

Three ladies, Lady Marialaura, Lady Monica and Lady Cinzia have invited me to tell you one of my stories. I know quite a few stories, in fact, and I have illustrated many of them. The story I would like to tell you today is about a princess, a dragon and a saint. 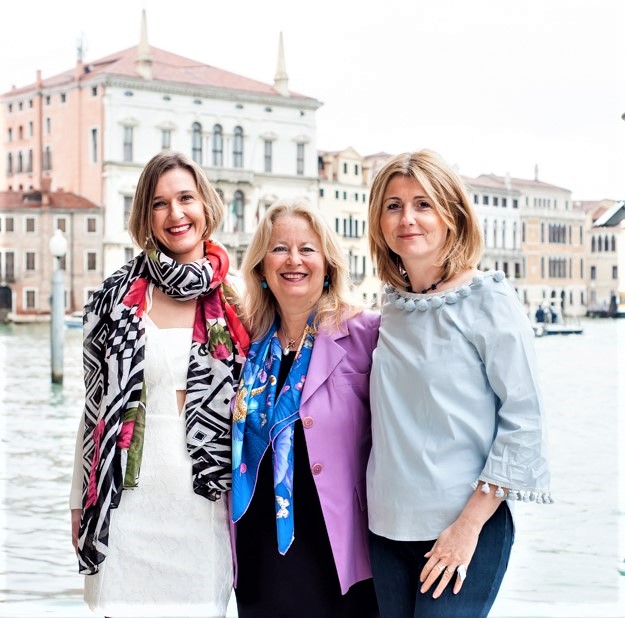 The three ladies, as they would look like today!

A long time ago, in the city of Selem, in Libia, there lived a quiet, peaceful people, the Selemites. One fine day, though, a powerful and fierce dragon arrived to Selem and started to threaten the life of every single person in the city. The poor Selemites tried to fight against it, or at least to convince it to leave them alone, but in vain: the dragon was too strong. The only way out for the population was to accept the dragon's request: their lives would have been spared, providing they wouldsend to the dragon every year a young maiden or a young boy. What a tragedy! How many youths year after year were eaten by the beast! What a sorrow for the sad Selemites!

One day the king's daughter, the young princess Silene, was drawn by lots as the one that had to be sacrificed. How beautiful she was! She had long blond hair, sweet eyes, and such graceful royal manners! Her cruel destiny was now taking her towards the dragon's cave. Here she is, frightened, breathless... 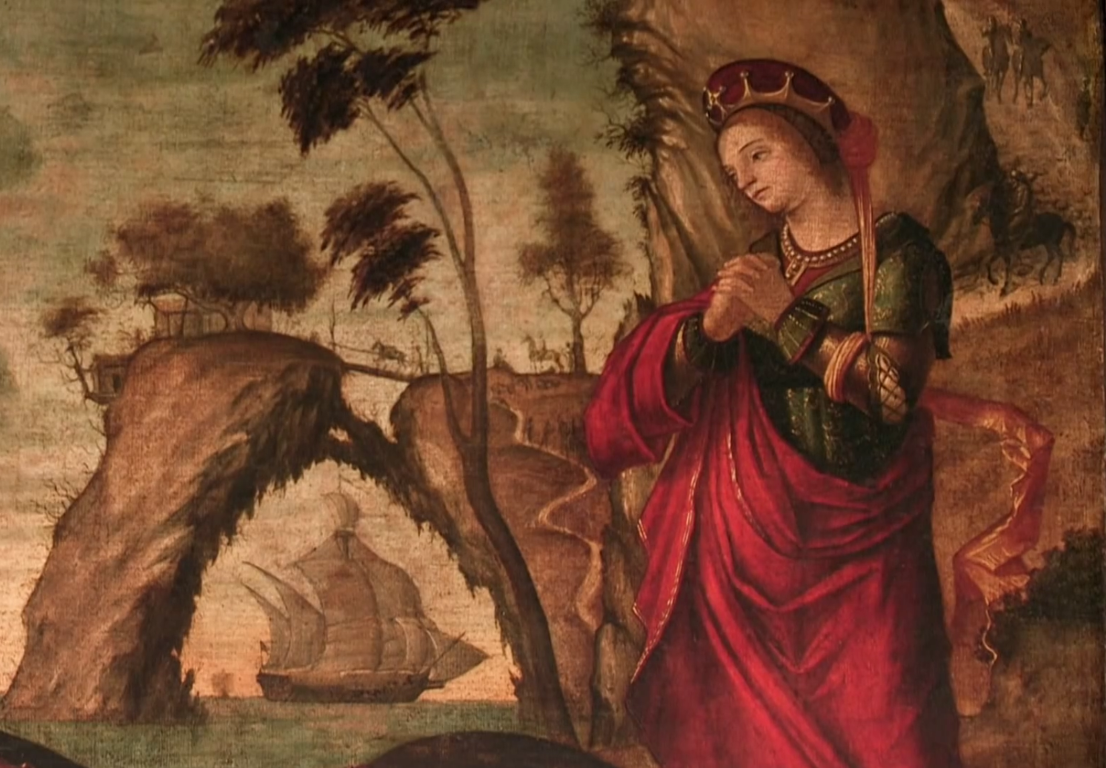 All of a sudden, a young soldier appeared on horseback: so handsome, pleasant, elegant... It was the warrior saint George, who, passing by Selem, had heard the story of the dragon and the youths and had then decided to save the princess. Here he is with his spear, starting his fight against the dragon! 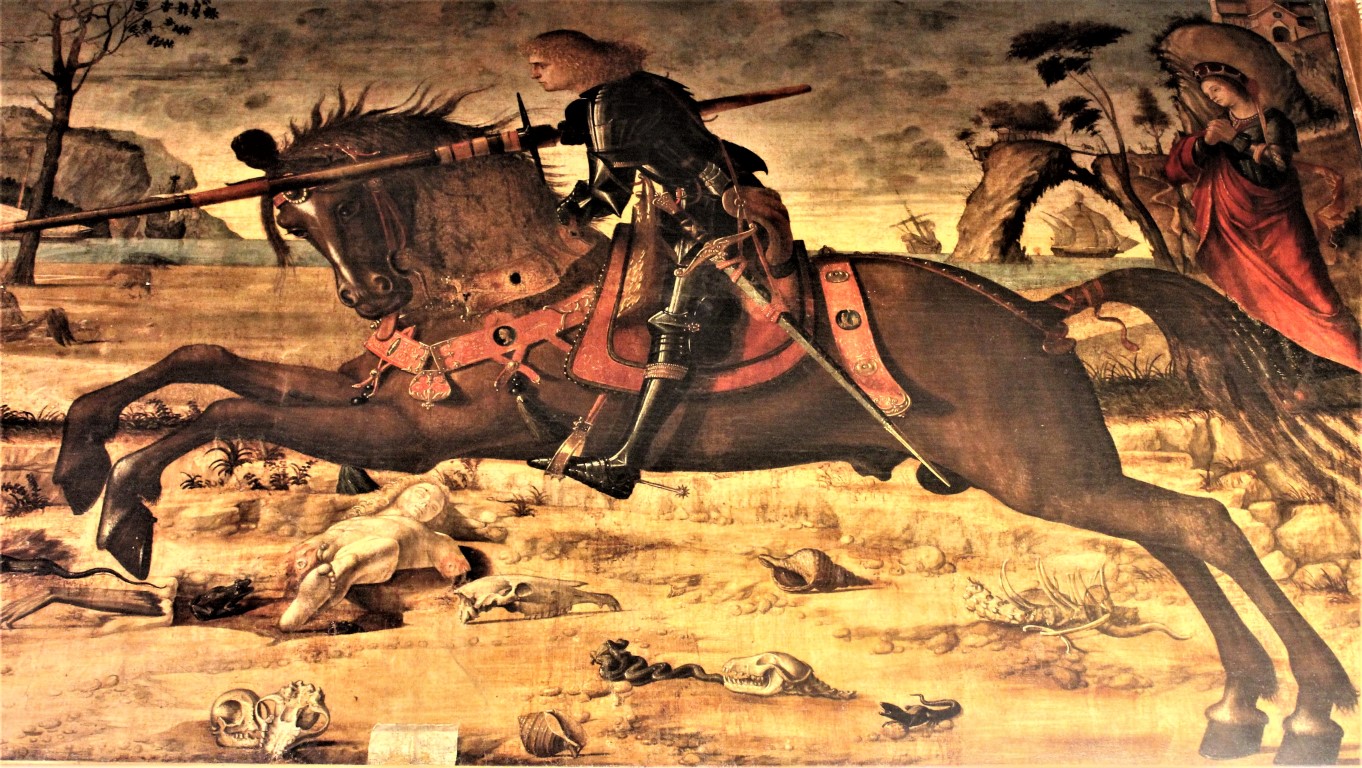 After a long struggle, George succeeded in defeating the terrible beast. 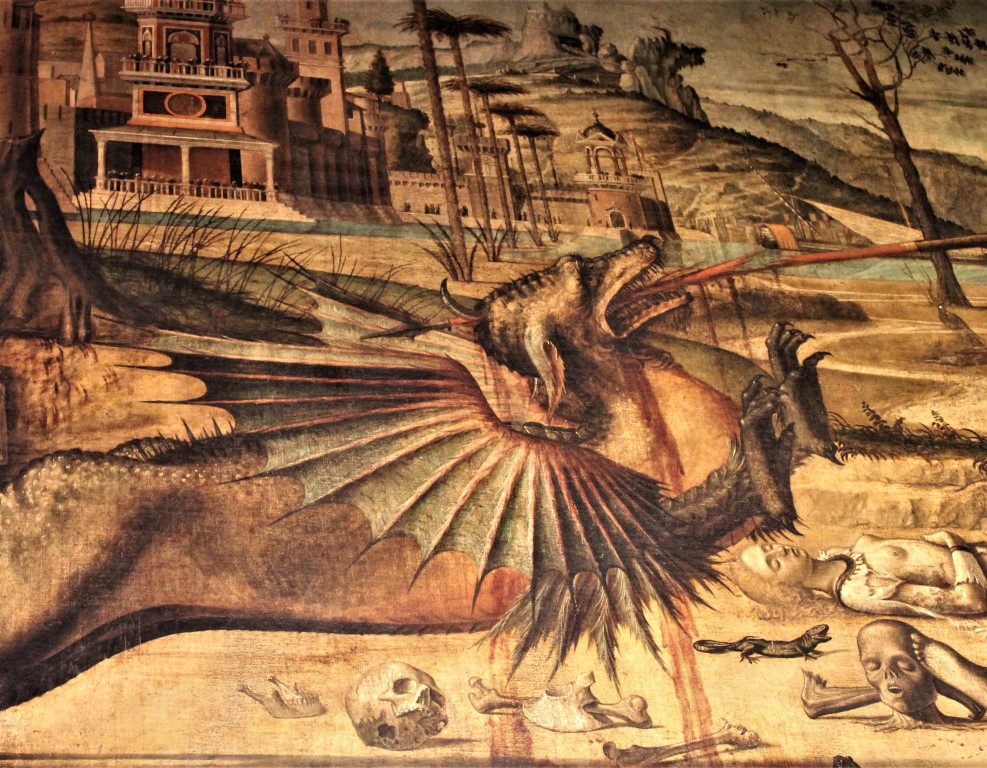 He was then able to take princess Silene back to her family. He brought to town the dragon as well, as to show everybody that he had definitely defied it.

Truly speaking, the Selemites surrounding George seem more scared at the sight of the dragon rather than happy for the fact that the princess had been saved. What am I saying? "Seem"? They do not seem, they are scared, and I know it for sure, since I have painted all of them! Take a better look at the Selemites: quite a few of them wear a Turkish styled turban... Why did I decide to represent them like that? Who knows... 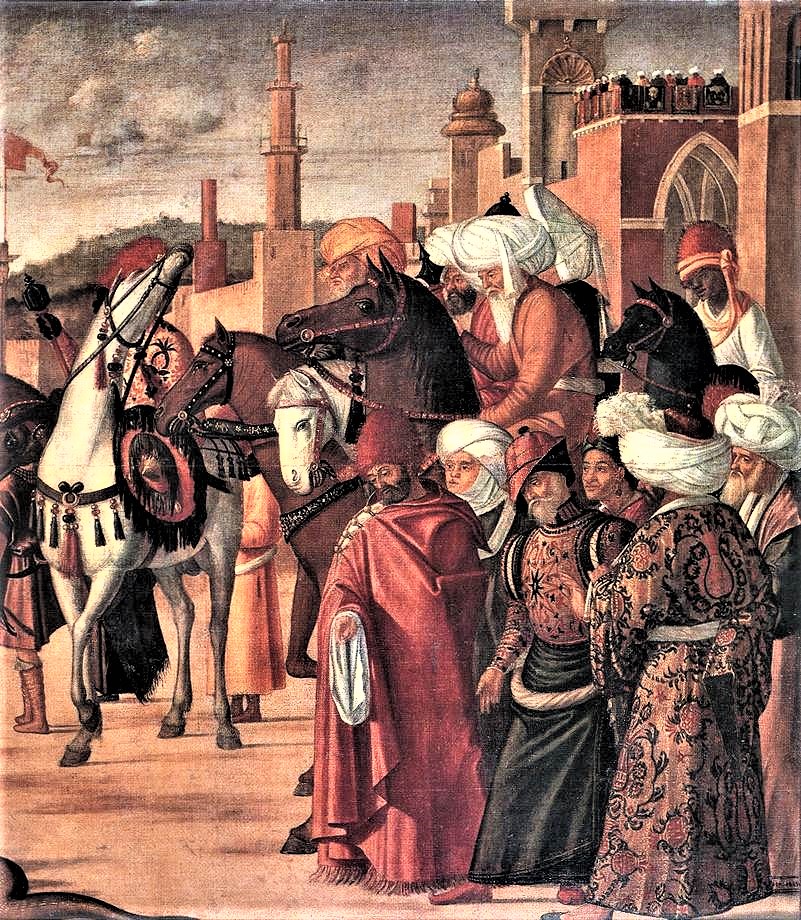 And now look how gracefully I have represented George. What a noble knight! 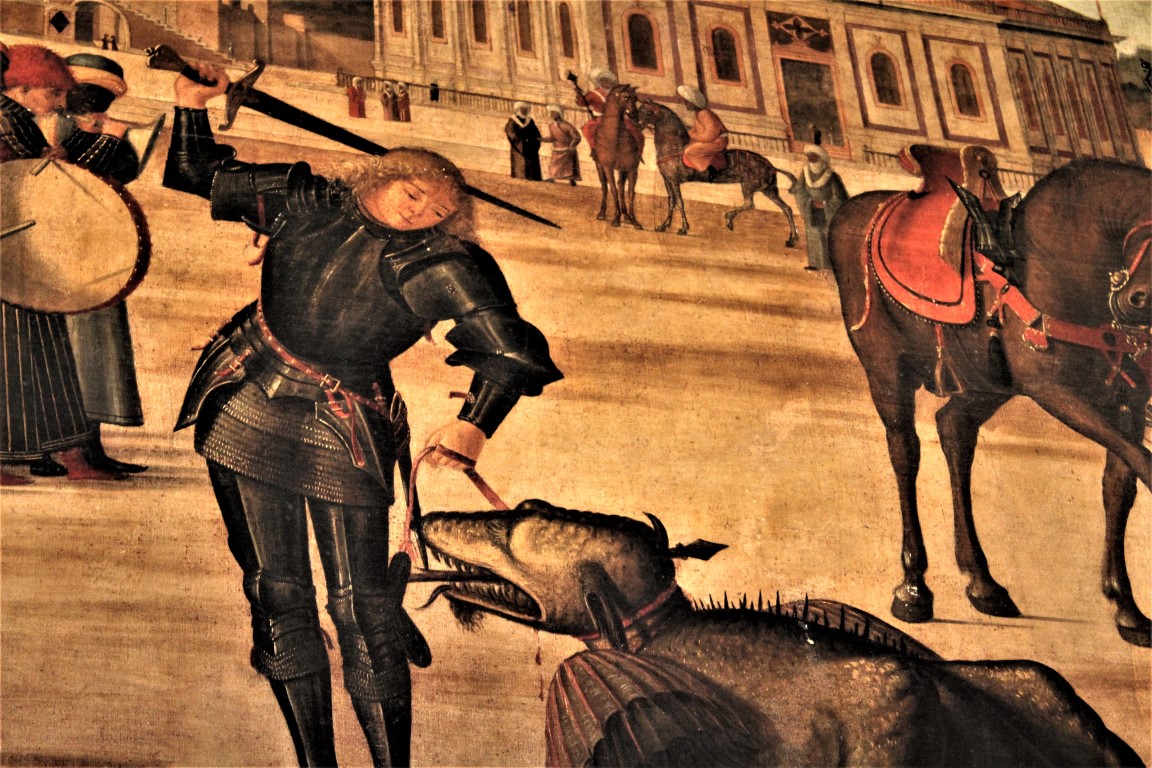 Well, what happens after a brave knight rescues a beautiful princess from a terrible dragon? Obviously, the knight and the princess get married! I am afraid, this is not the case in this story. George did not really long for getting married. Being a soldier of Christ's, he suggested that the Selemites should ask for baptism. The king accepted George's suggestion and had himself, his family and the entire population baptized by St. George. Poor princess Silene! She had for sure fallen in love with handsome George. Instead of a marriage, the happy ending for her was... baptism. 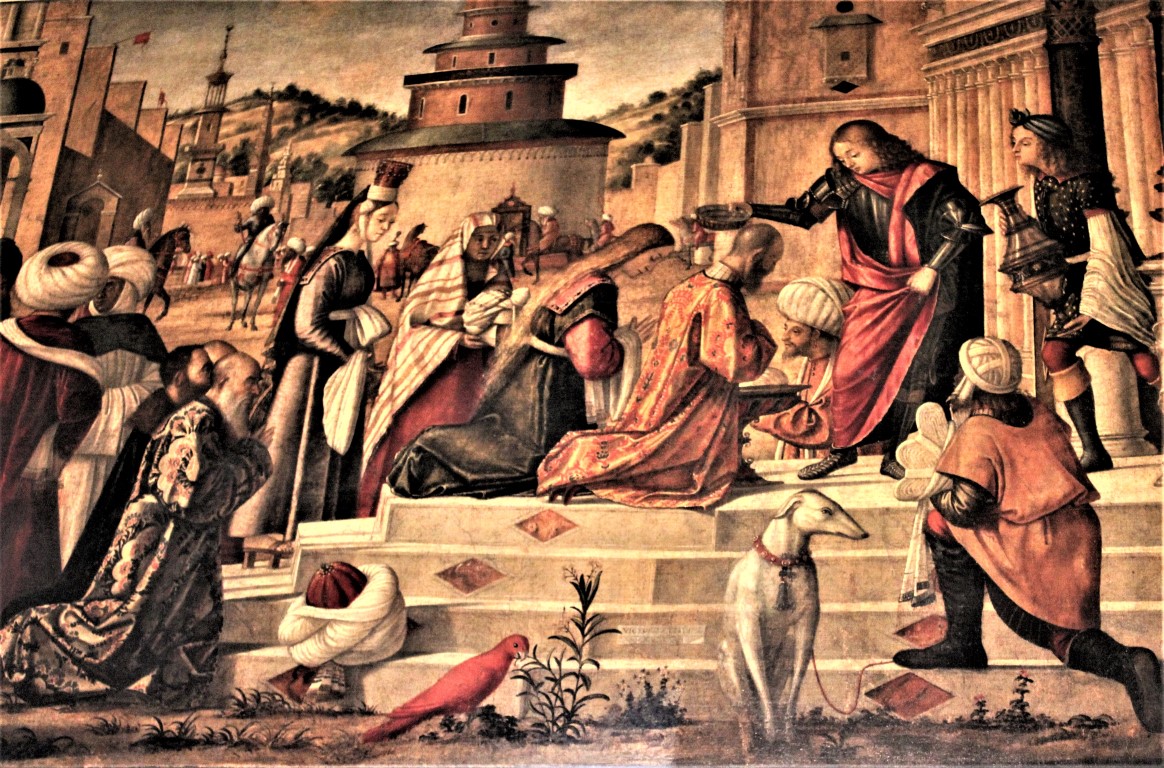 Now pay attention to George! He sprinkles the king's family with water and at the same time he moves backwards, driving away his cloak, as to prevent any drops of water from falling on him. Honestly, I think that only a genius like me could have represented George like that. Would you like to know the reason why I portrayed him that way? 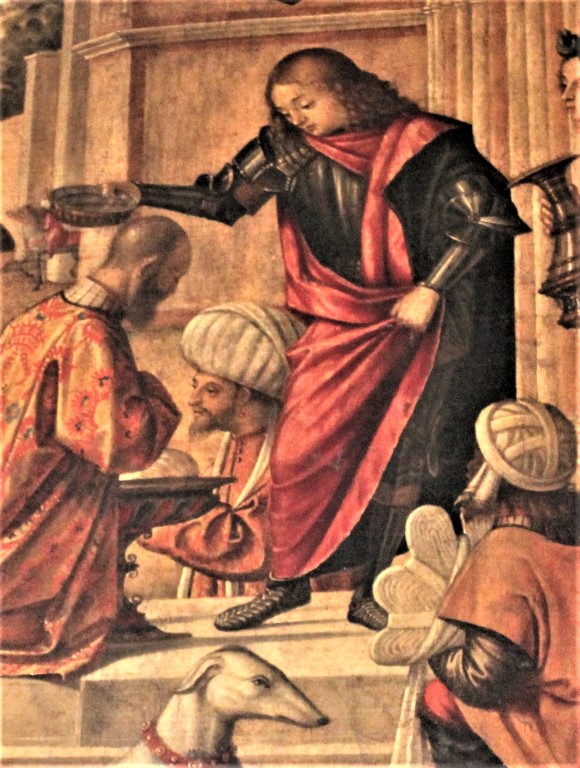 So far I have been telling you the story of George, the dragon and the princess using my paintings to illustrate it. But if we stopped a while to admire the paintings themselves, their colors, landscapes, buildings, characters, clothes, animals, there would be so much to say that I think I would go on talking forever. Modestly,these paintings of mine are excellent masterpieces. 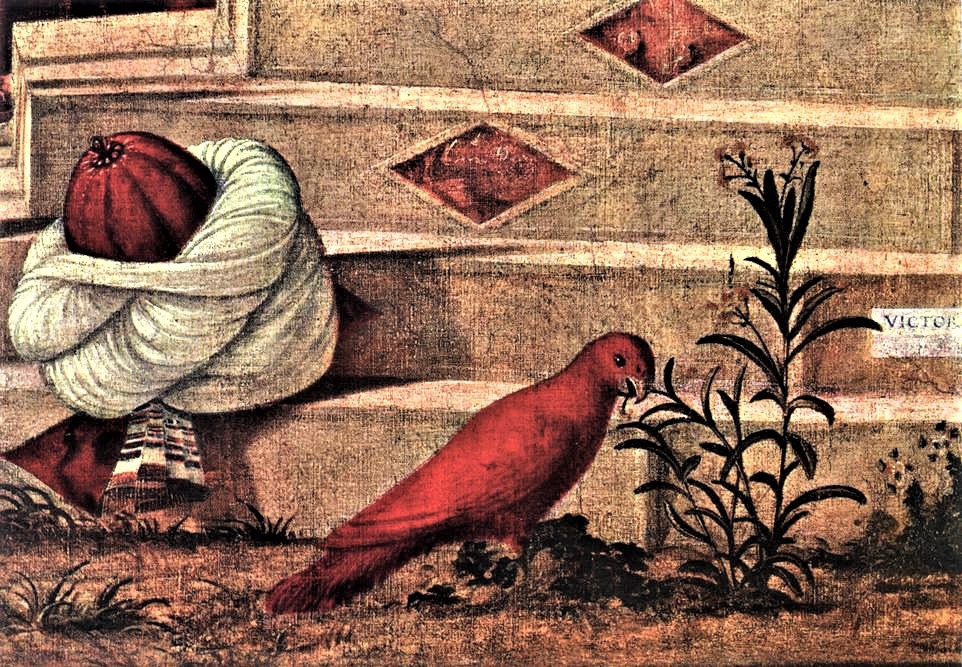 I hope that the above mentioned three Venetian ladies can now explain, shortly and better than I could, all the mysteries that I have not unveiled and all the details of my paintings. I will be waiting for you here, in Venice!"

We would like to thank Messer Carpaccio for accepting our invitation. And we accept his! Would you like to know where his paintings are? Would you like to see them? Do you have any questions about this story and its details? We hope that this story has captured also the parents' attention... Parents, are you planning to take your children to Venice but you are not really sure how to entertain them during your stay? Together with Messer Scarpassa, pardon, Carpaccio, we are waiting for you to help you.

We take now leave with a detail from one of the best masterpieces ever painted by this master, "St. Augustine in his Study".

But this is a totally different story! Bye!
Contacts: info@guidedtoursinvenice.com 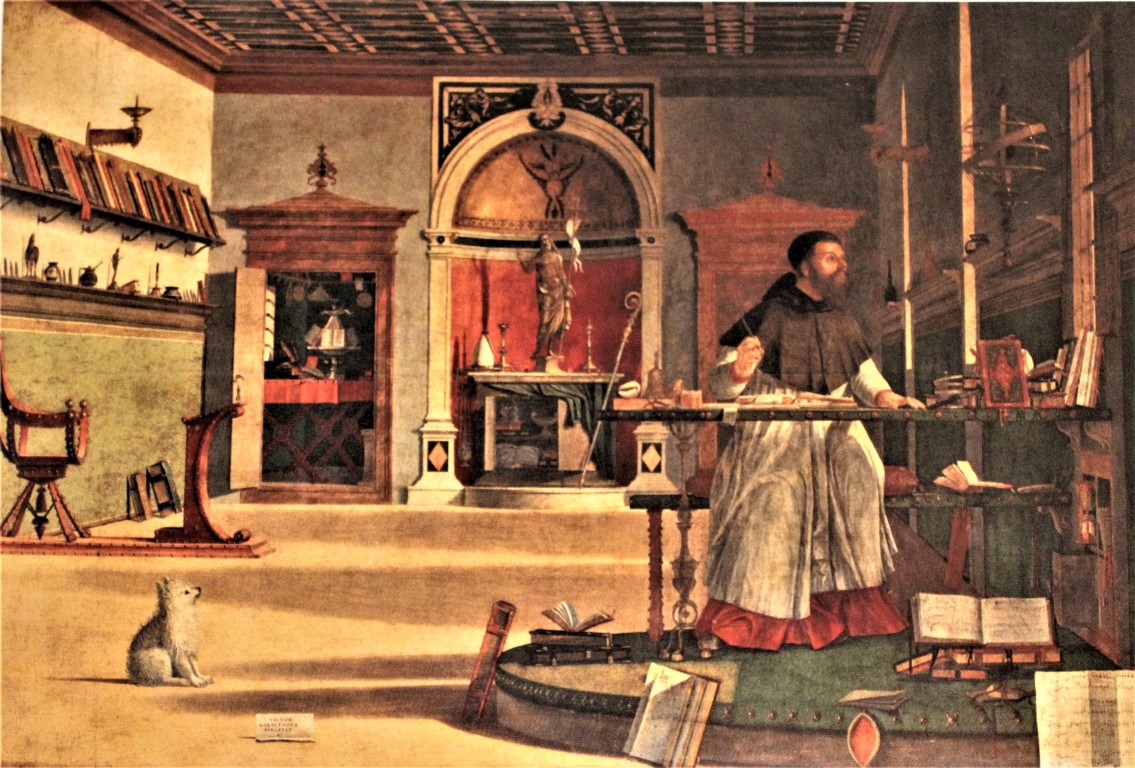 St. Augustine in his Study