Venice and the Red Stone That Stopped the Plague

History, legend, religion, superstition and much more... For those who would like to visit a hidden, unusual Venice, off the beaten path, let us suggest the option of getting lost in the Castello District, of wandering in search of an important stone that has become quite famous: the red stone that you can see in the place called Sotoportego di Corte Nova. 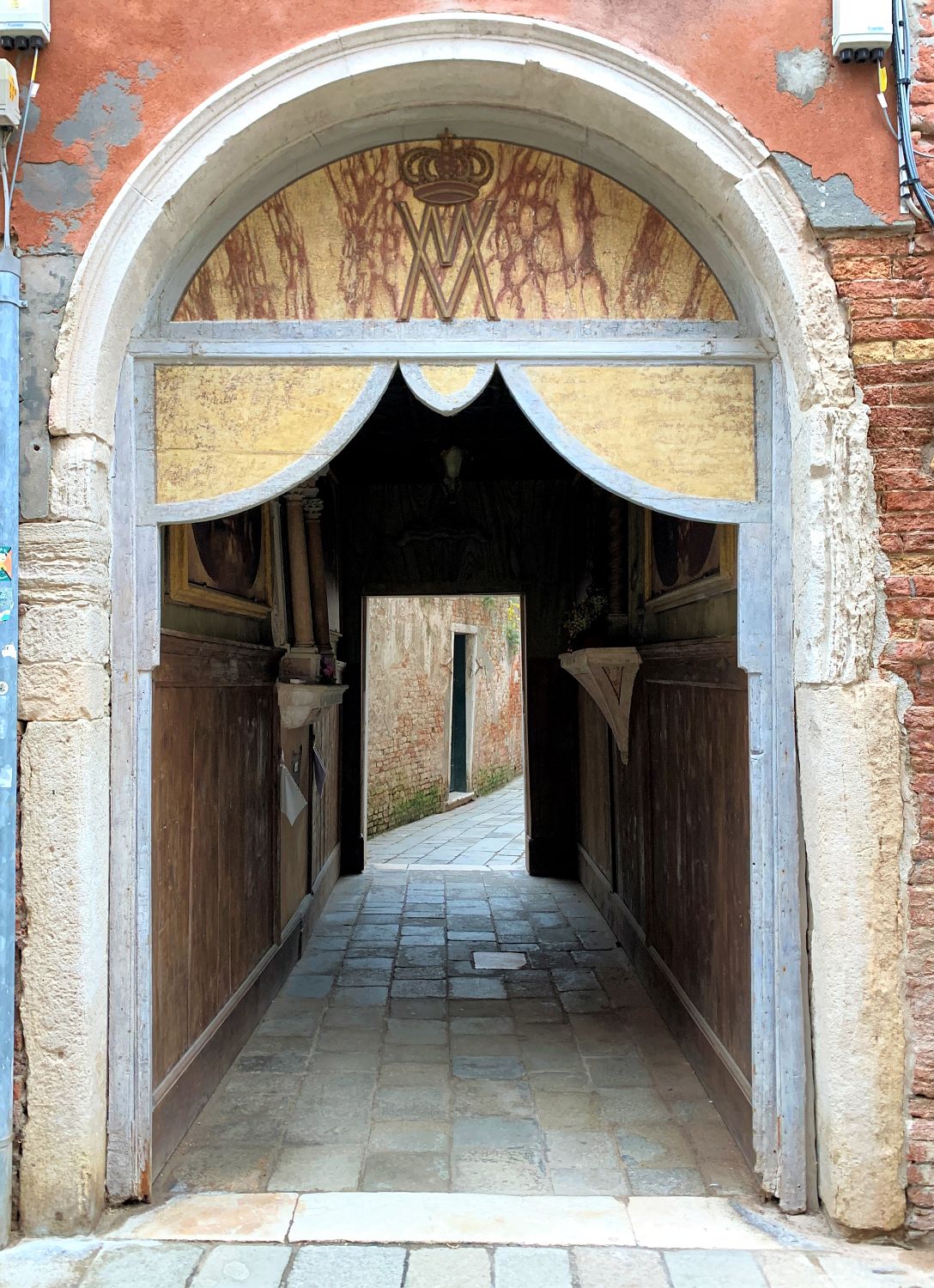 To explain the reason why this stone has become so relevant, we should go back in time to the year 1630, when Venice was stricken by an epidemic of plague that caused the death of thousands of people.
The end of the epidemic has been celebrated yearly since then, on November 21st, with the famous Feast of the Holy Mary of Good Health (Santa Maria della Salute, link to our previous post Venice between sacred and profane: the Feast of Madonna della Salute). 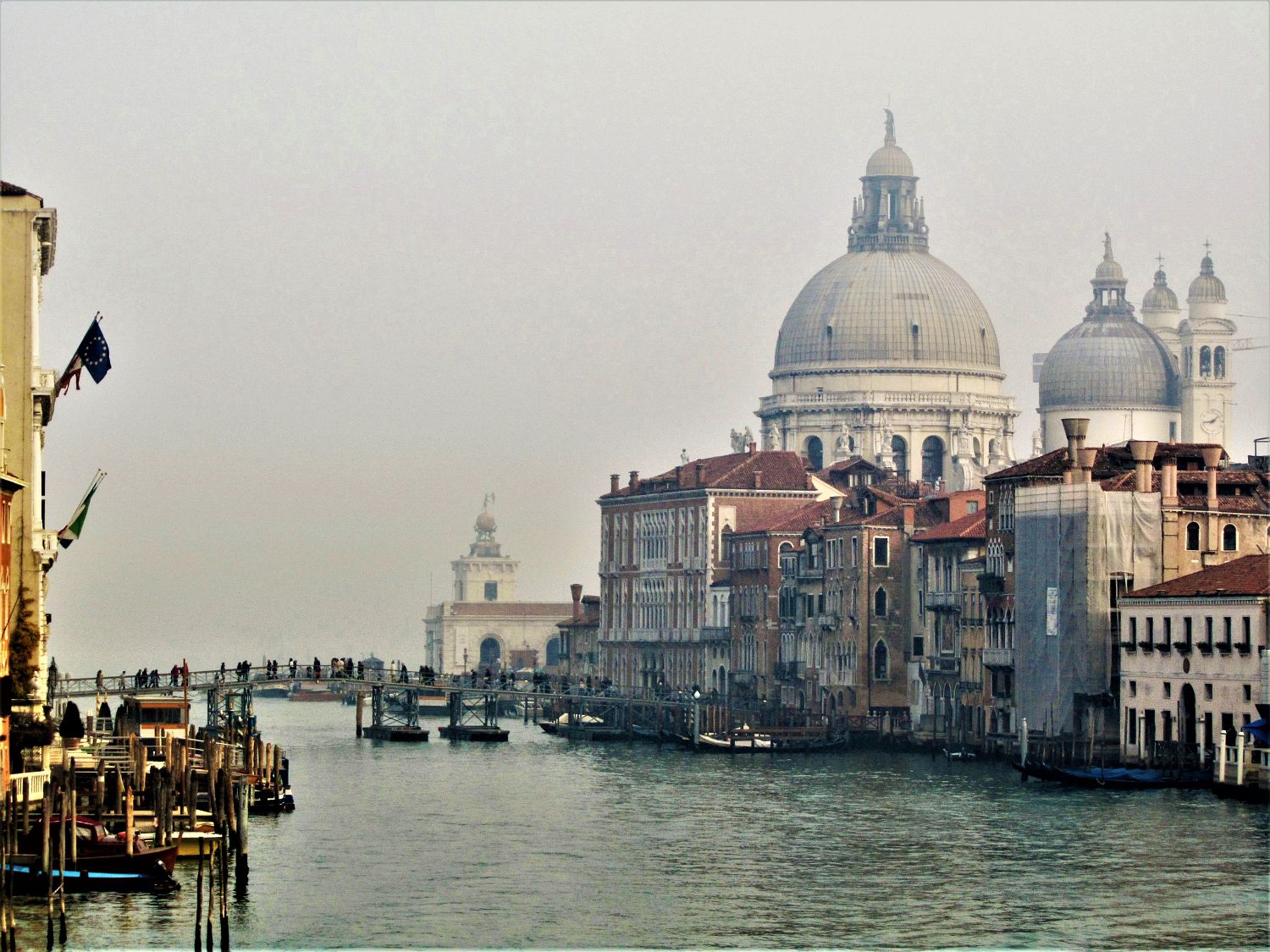 The Feast of the Holy Mary of Good Health

As far as the red stone is concerned, history and legend have merged and have become part of the Venetian popular traditions.
The legend has it that Giovanna, a Venetian woman who lived in that area, dreamt one night of the Holy Mary who told her to paint a little image of the Virgin Mary herself together with St. Roch and St. Sebastian (the two Saints that protected the faithful from the epidemics). The image had then to be hung on a wall of the sotoportego (i.e. passageway).
Giovanna, helped by the other inhabitants of the place, fulfilled the Holy Mary’s demands and everybody started to pray so that the plague would end.
And there happened a miracle: the plague stopped as it reached the holy image, collapsed to the ground and vanished exactly on the spot where today we can see the red stone. All the people who lived in that courtyard were spared from contagion. 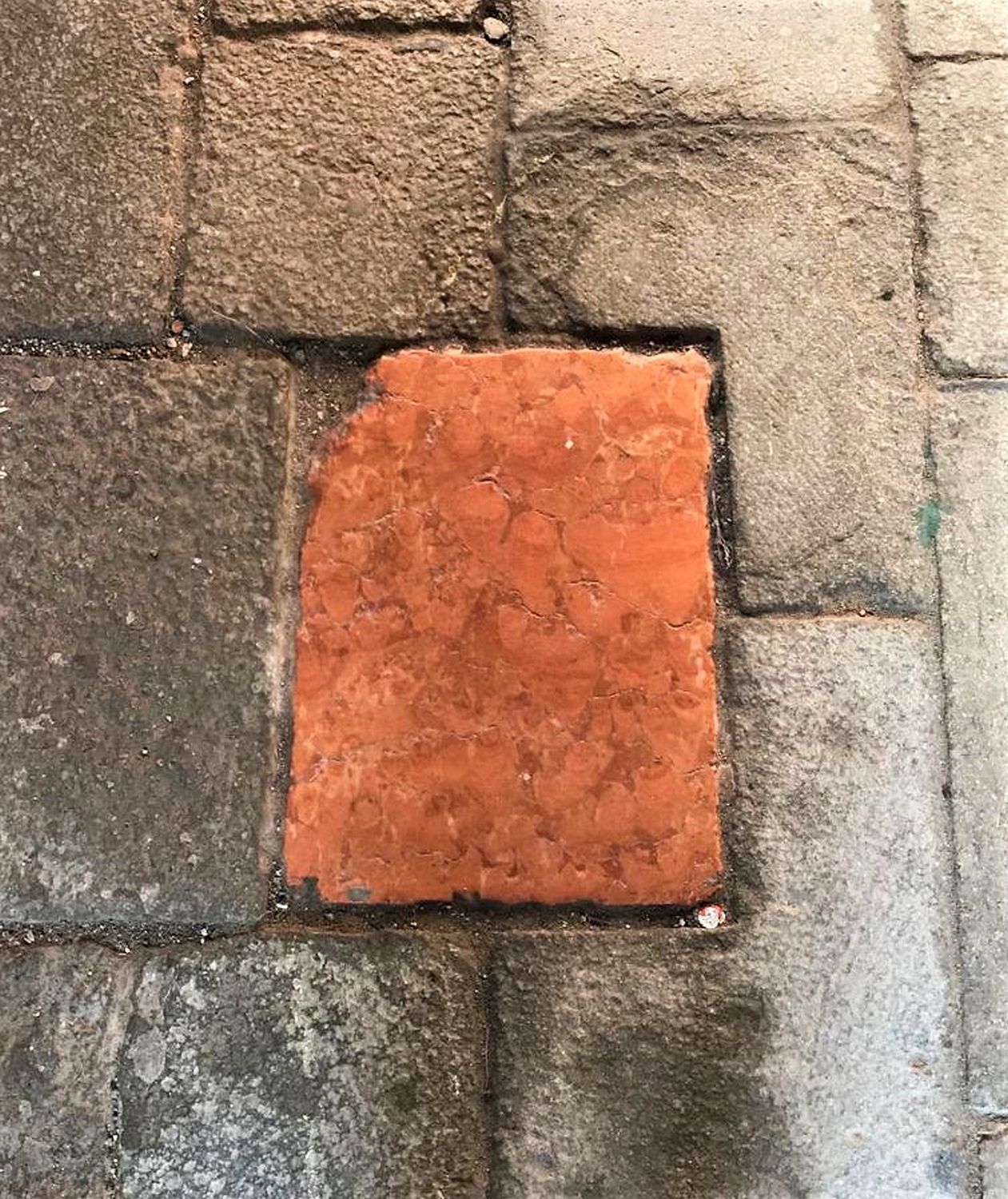 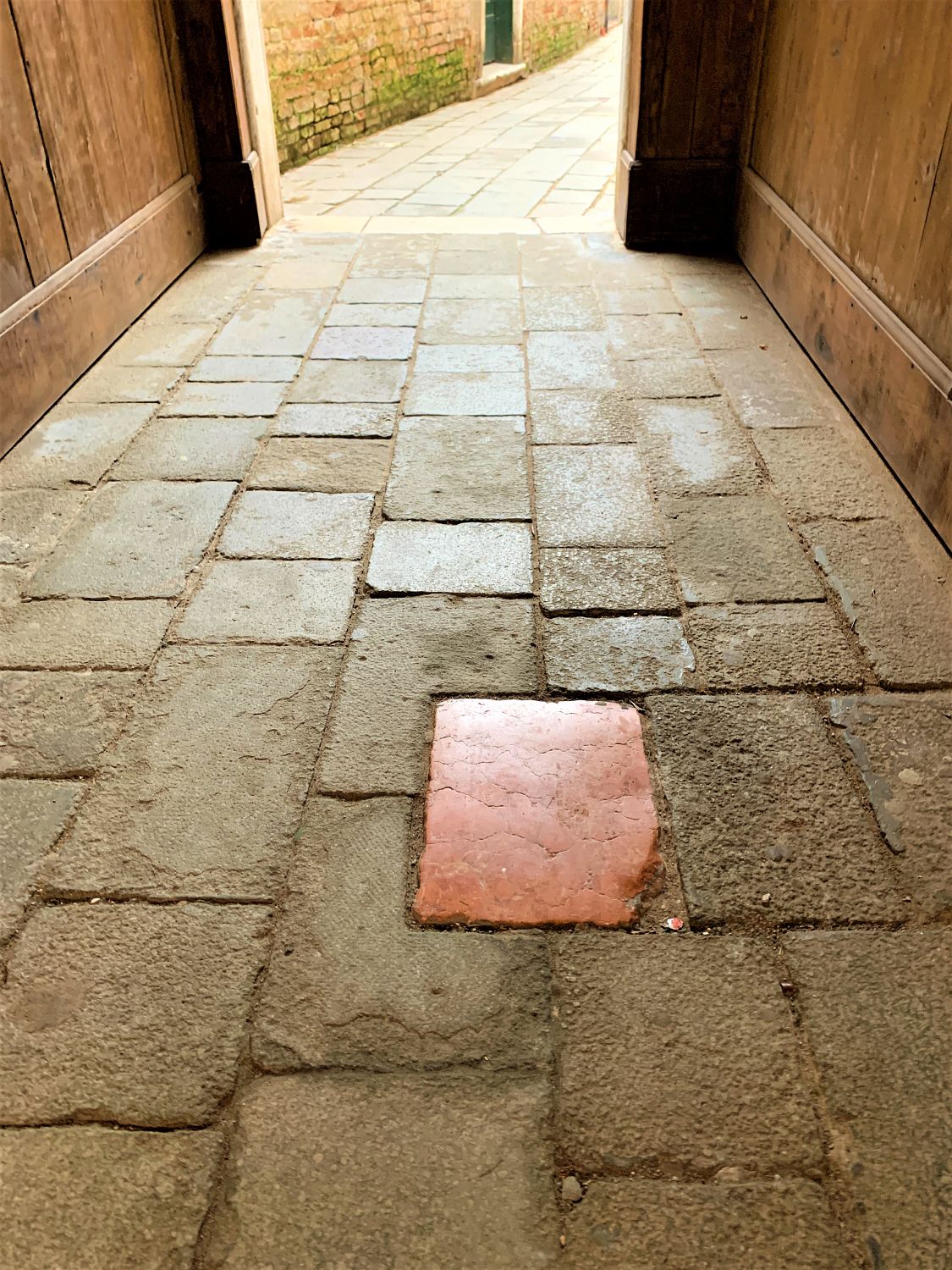 Take a look at this stone, and take a picture of it, but do not step on it: it would be an omen of bad luck. Just think that on those days the mourning color was red.

As a consequence of this miracle, the sotoportego became the symbol of the end of the epidemic. It is a real hidden jewel of Venice. 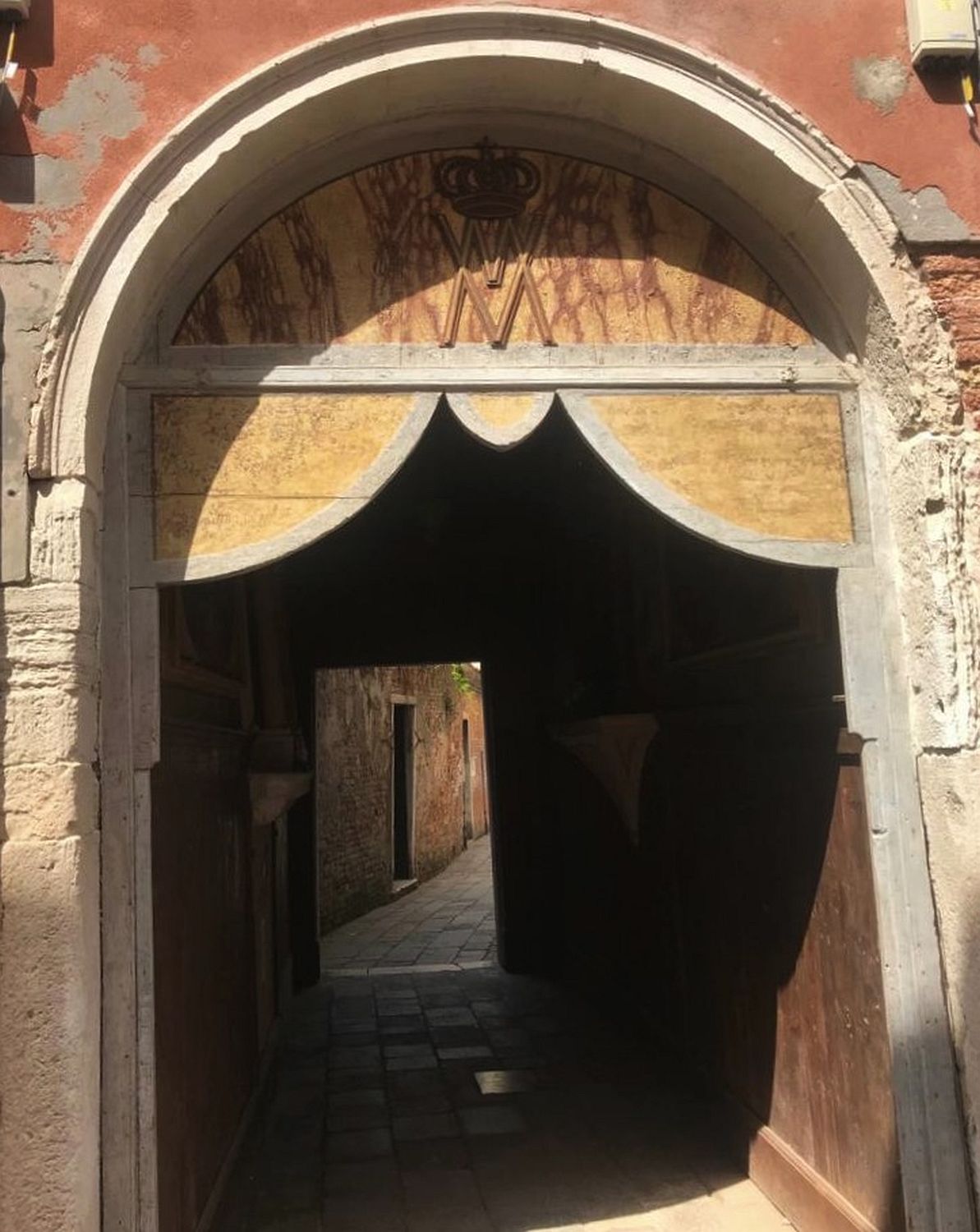 Pay attention to the blue coffered ceiling with silver and gold decorations, that for sure used to be even brighter and more sumptuous in the past. The blue color reminds of the sky where the holy images of the Virgin are placed. 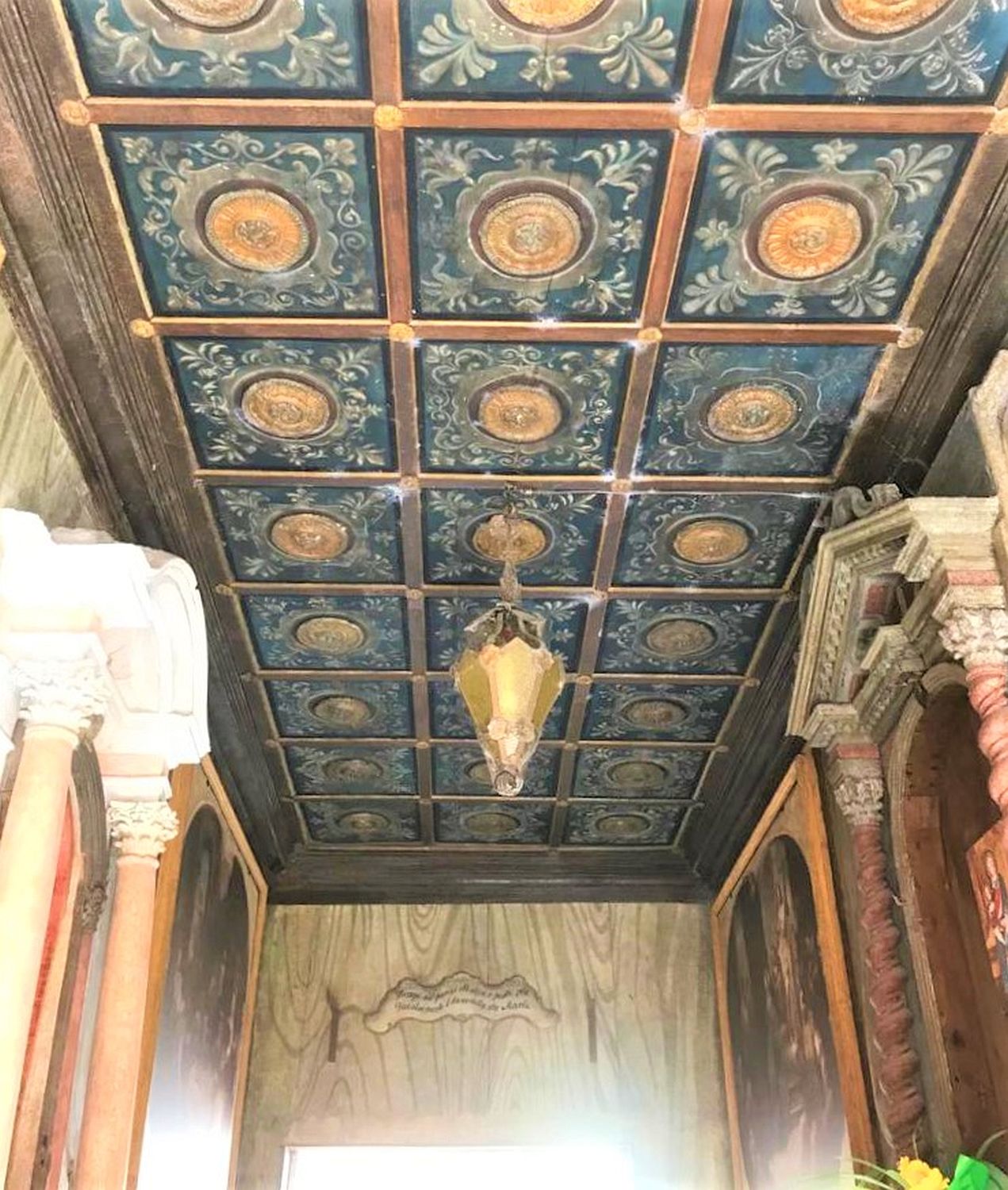 Unfortunately, Giovanna’s original painting is now lost. Today in the sotoportego we can admire two little altars dedicated to the Holy Mary. 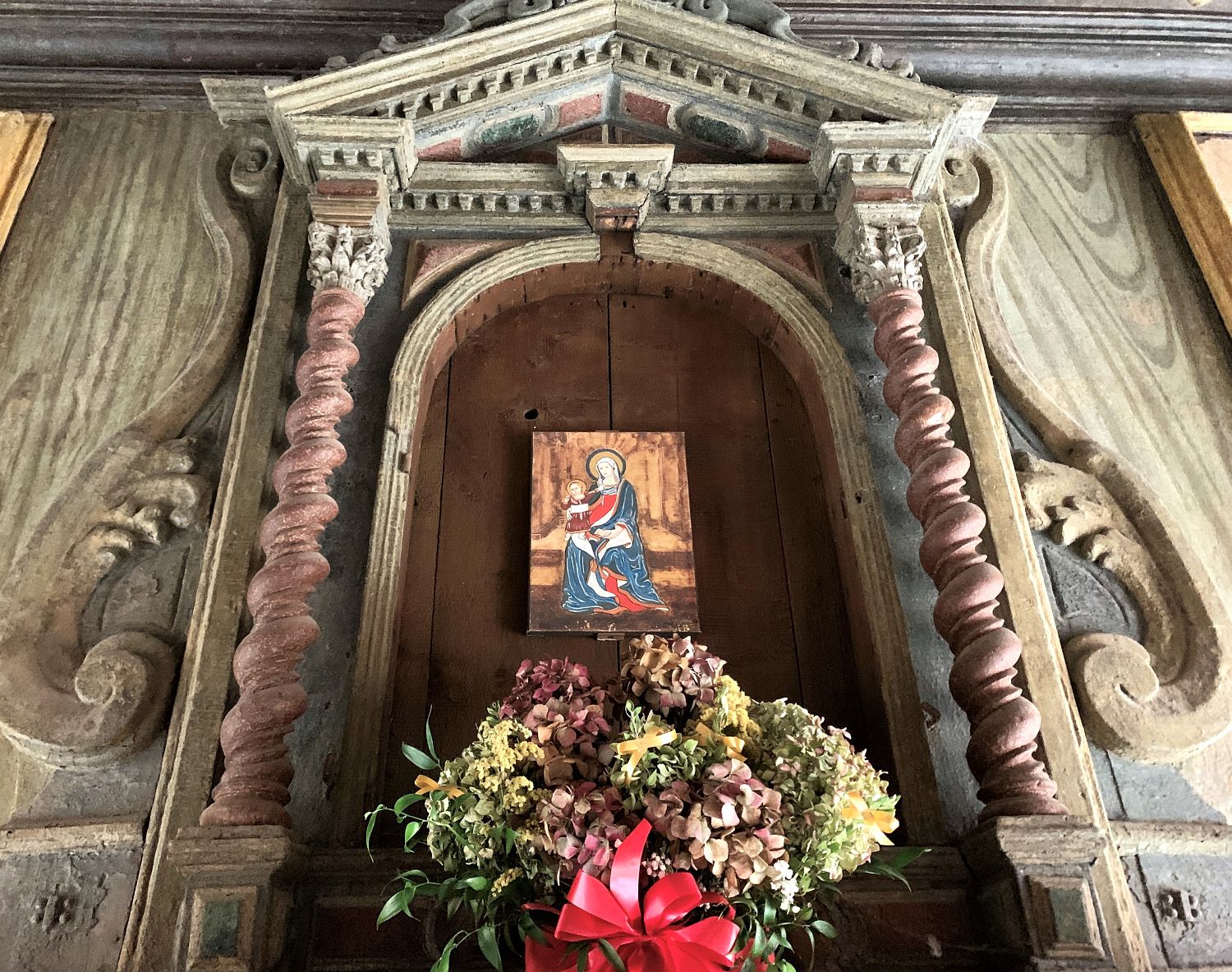 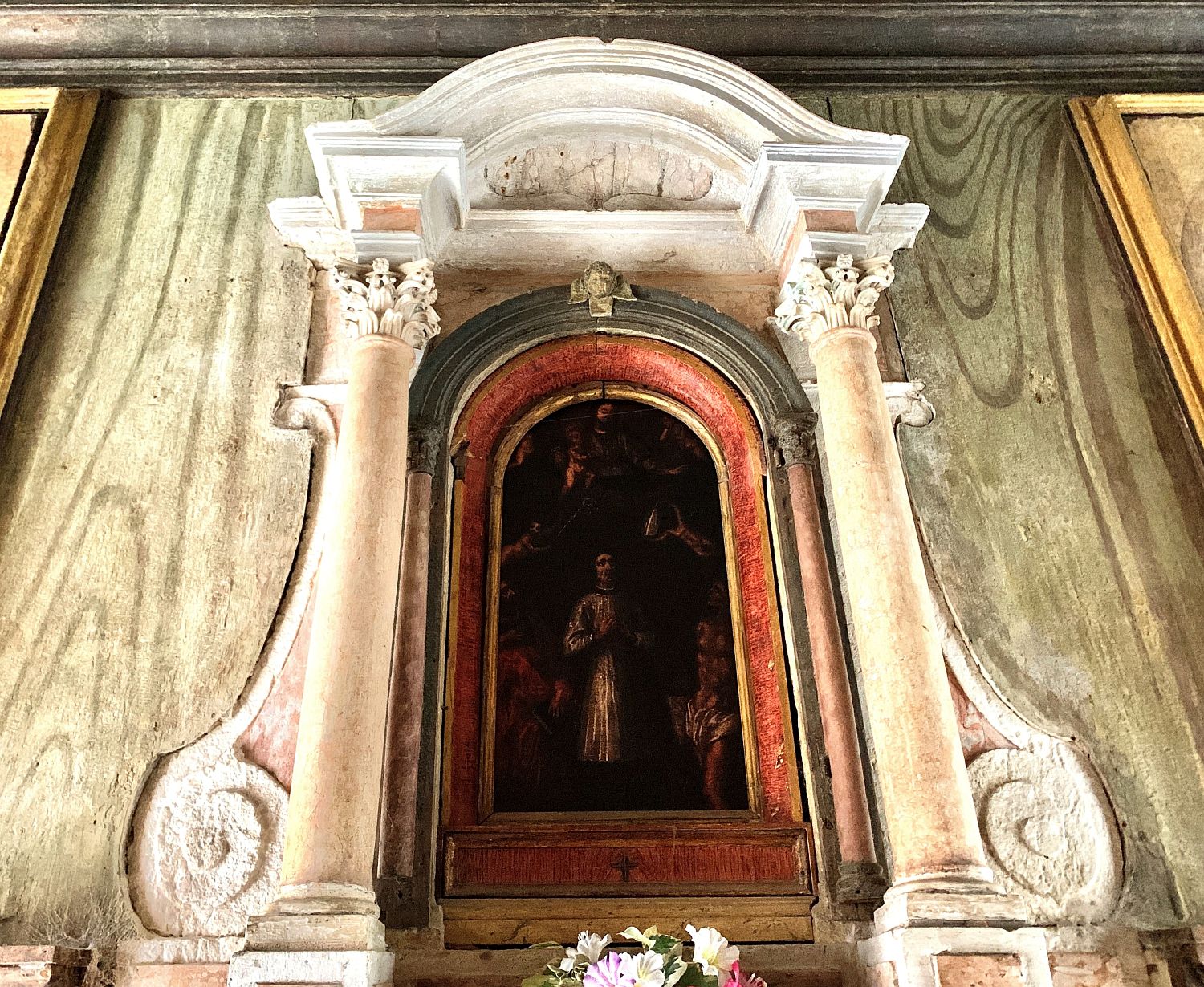 We can also find the reproductions of the four paintings of the 1600’s representing the miraculous event (the original ones are now preserved in the church of San Francesco della Vigna): “The Priest Comforts the Sick with the Plague”, “Venice Enthroned in the Hall of the Great Council Talks to the Doctors”, “Venice Kneels Down in front of Christ and the Holy Mary”, “The Thankful Venetians Pray in front of the Holy Image of the Virgin Mary, St. Roch and St. Sebastian”. 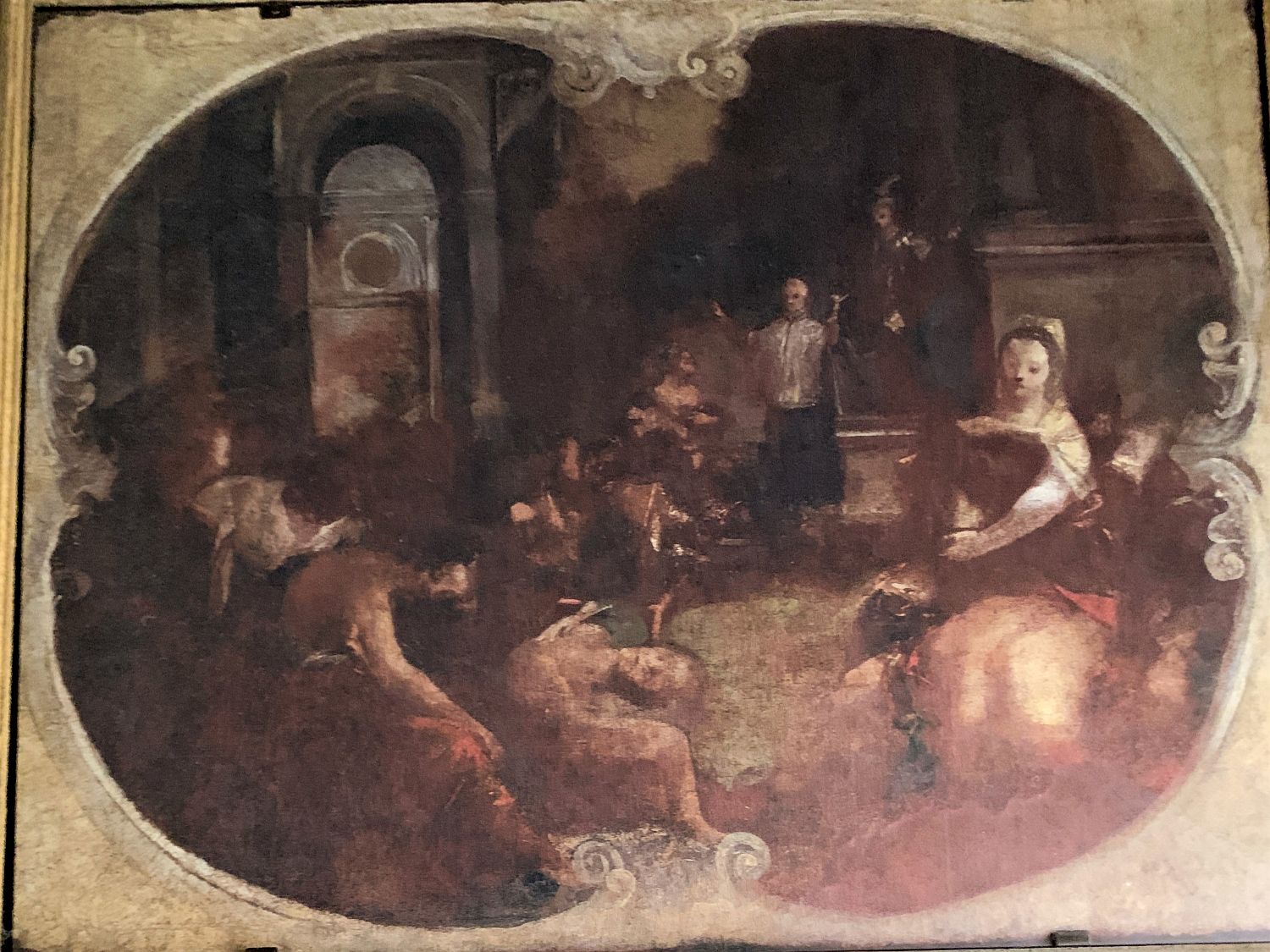 The Priest Comforts the Sick with the Plague 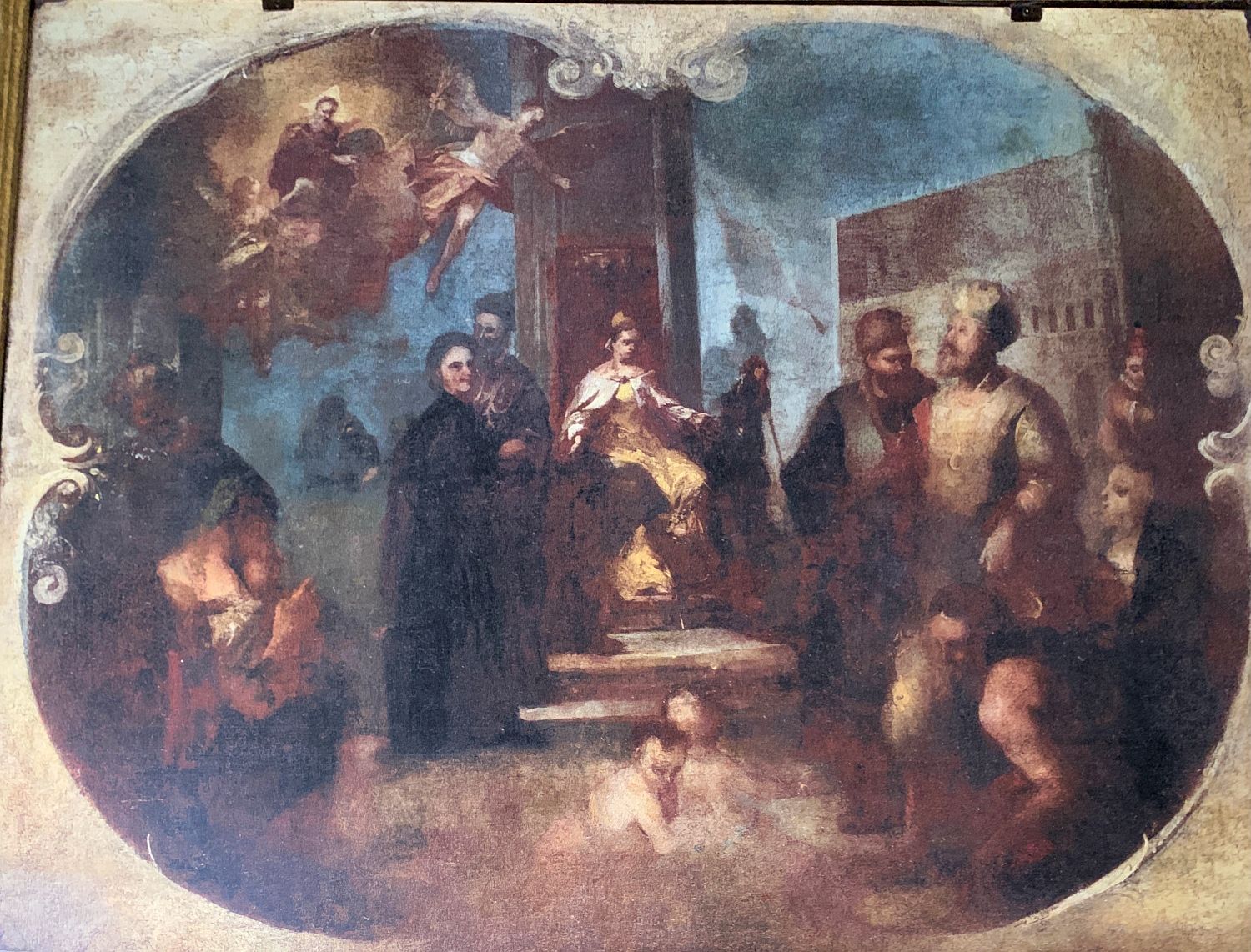 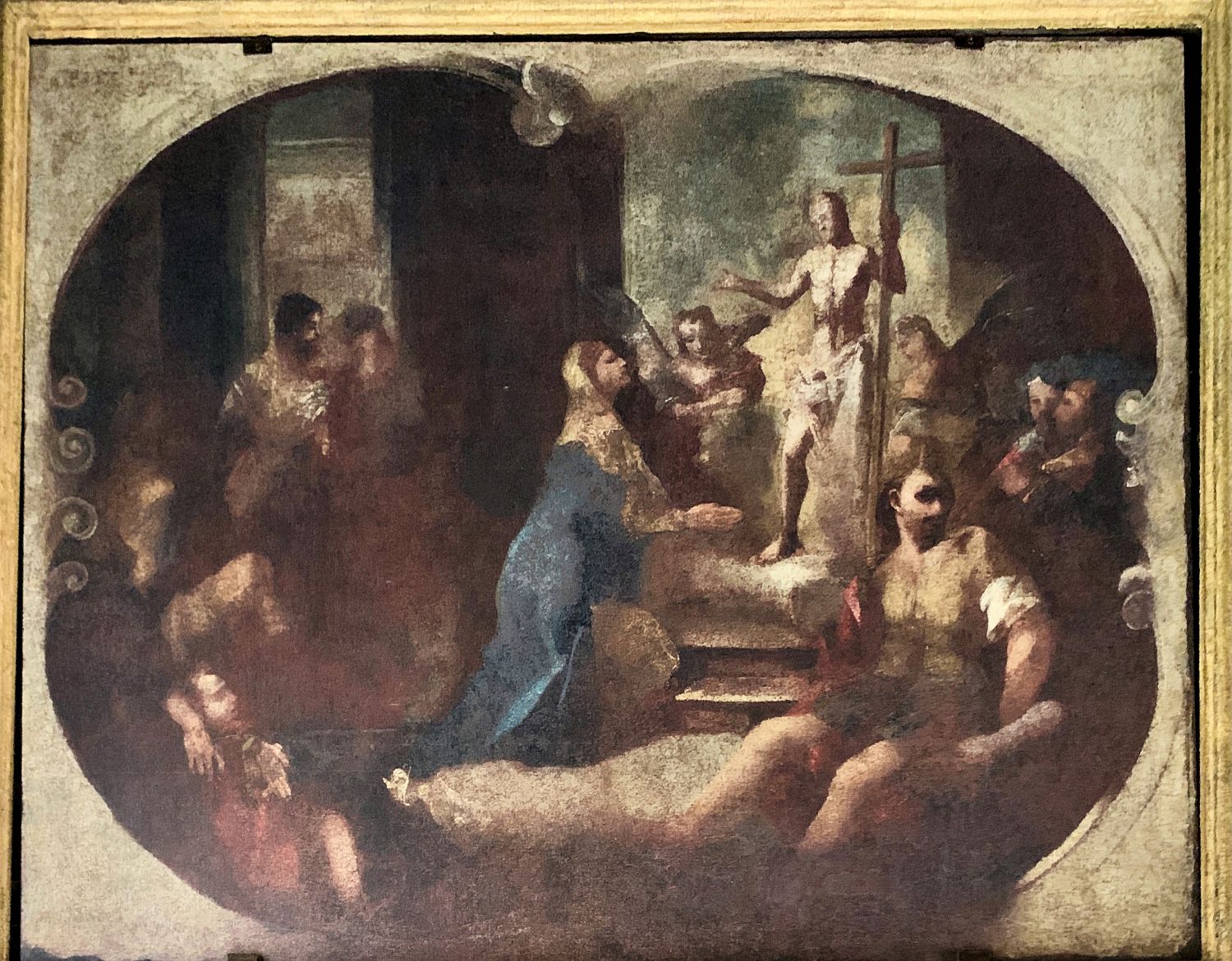 Venice Kneels Down in front of Christ and the Holy Mary 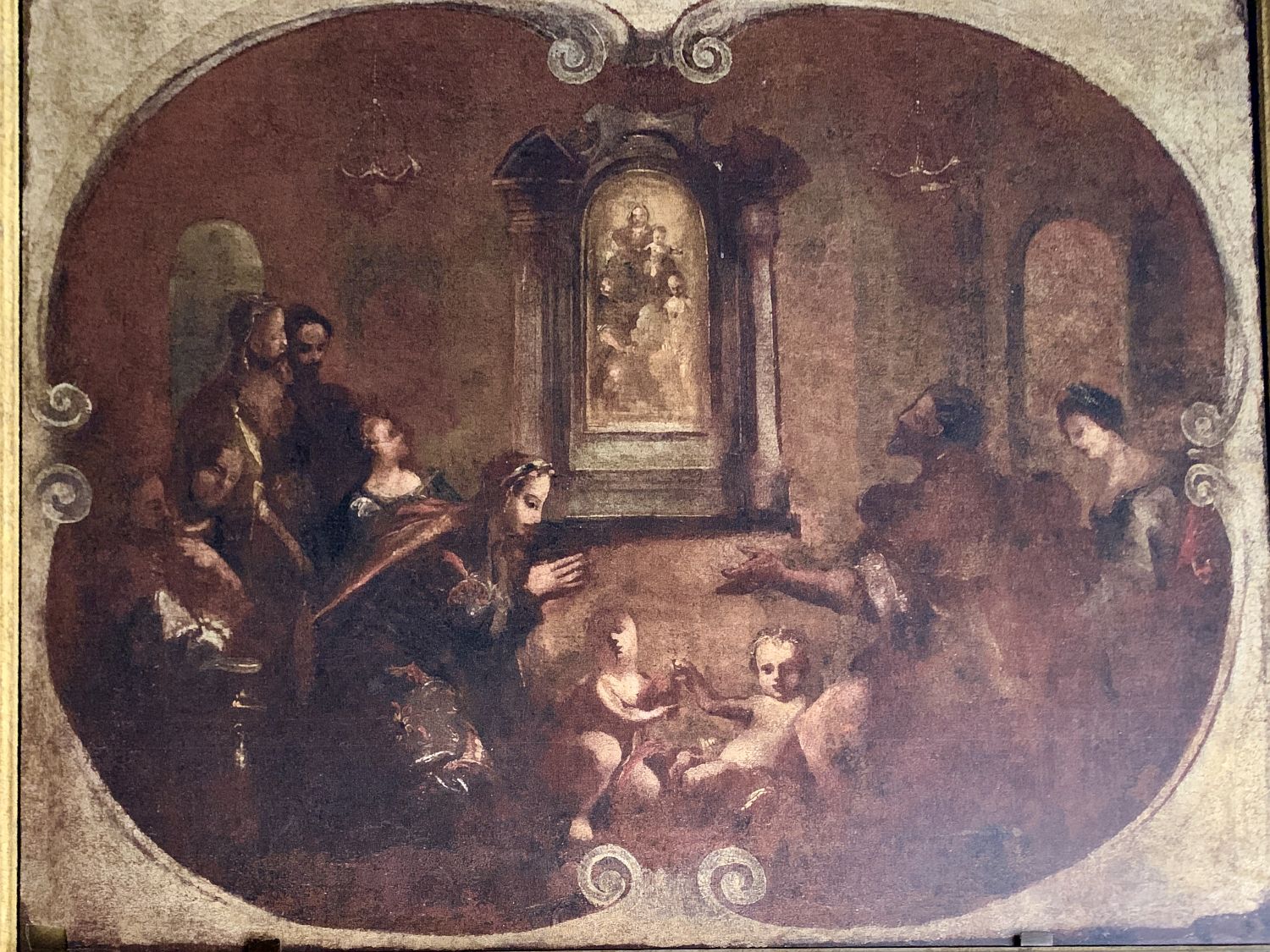 The Thankful Venetians Pray in front of the Holy Image of the Virgin Mary, St. Roch and St. Sebastian

In the sotoportego a memorial writing states: “Keep out, evil plague, and do not dare enter this courtyard, since it is blessed by Mary”.

History, legends, superstition, traditions, religion: they are all present in this little Venetian casket… and if you wish to book a guided tour of the hidden Venice, do not hesitate to contact us! We’ll be waiting for you!
info@guidedtoursinvenice.com 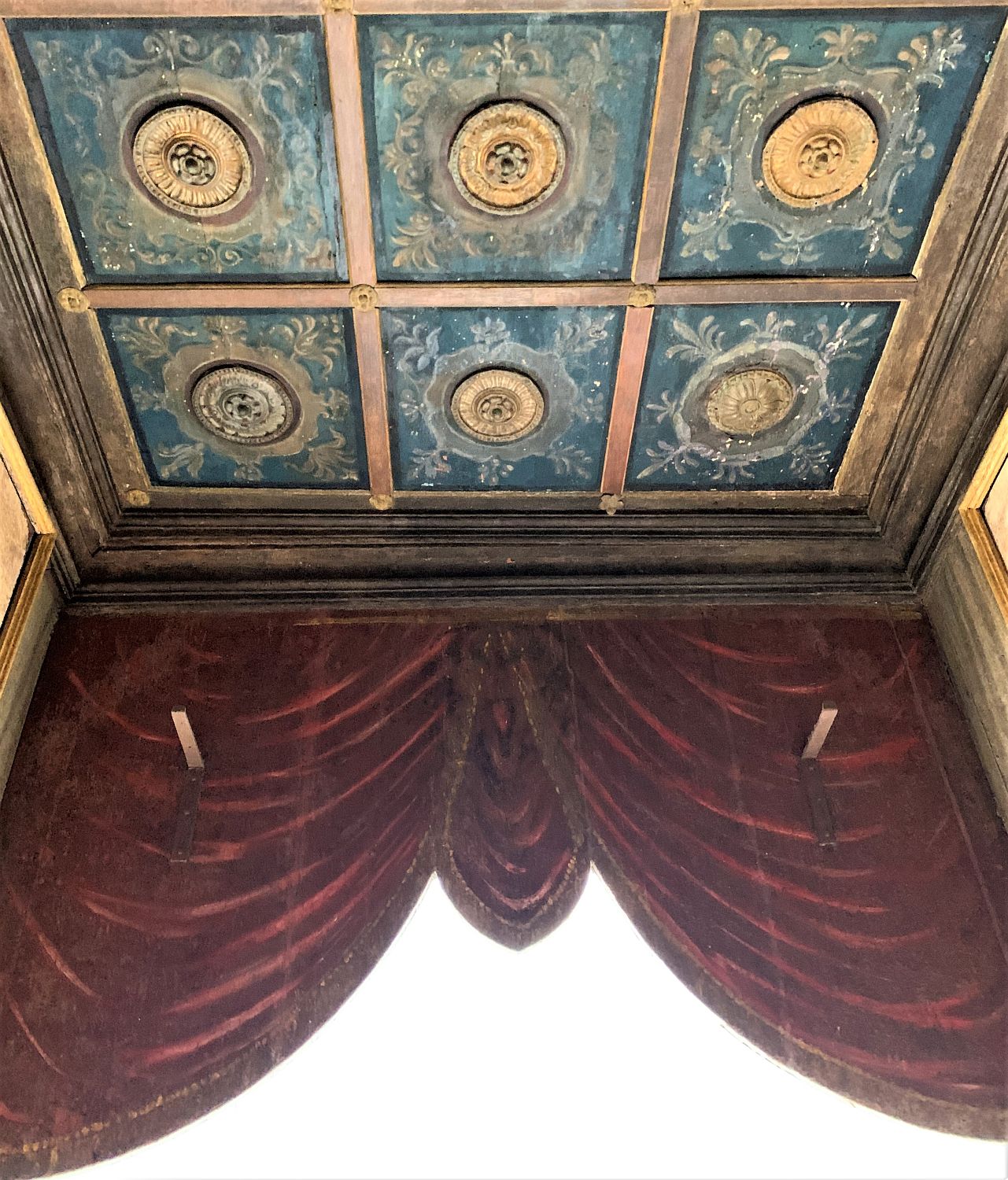