The Palazzo Cini Gallery. Adrian Ghenie: The Battle between Carnival and Feast

The first solo exhibition in Italy of works by Adrian Ghenie, presented in dialogue with the rooms of the Palazzo Cini Gallery, including new works inspired by the history of Venice Following major exhibitions in Europe and the USA, and the artist's participation in the Venice Art Biennale in 2015 representing Romania.
On Friday, 19 April 2019 the new season at the Palazzo Cini Gallery opens with an exceptional exhibition: the first solo show ever staged in Italy by Adrian Ghenie (b. 1977), entitled The Battle between Carnival and Feast.

Following significant projects in prestigious venues, such as the Centre Pompidou, Paris, the Venice Biennale and the San Francisco Museum of Modern Art, the Fondazione Cini hosts a show by the highly acclaimed Romanian painter in an unprecedented dialogue with the rooms and history of the house-museum of the Palazzo Cini.
For the occasion, Ghenie exhibits a series of nine stunning paintings, some on show for the first time, inspired by the history of Venice, but always linked to the more controversial, darker issues of today’s world. The exhibition has been organised in collaboration with Galerie Thaddaeus Ropac. 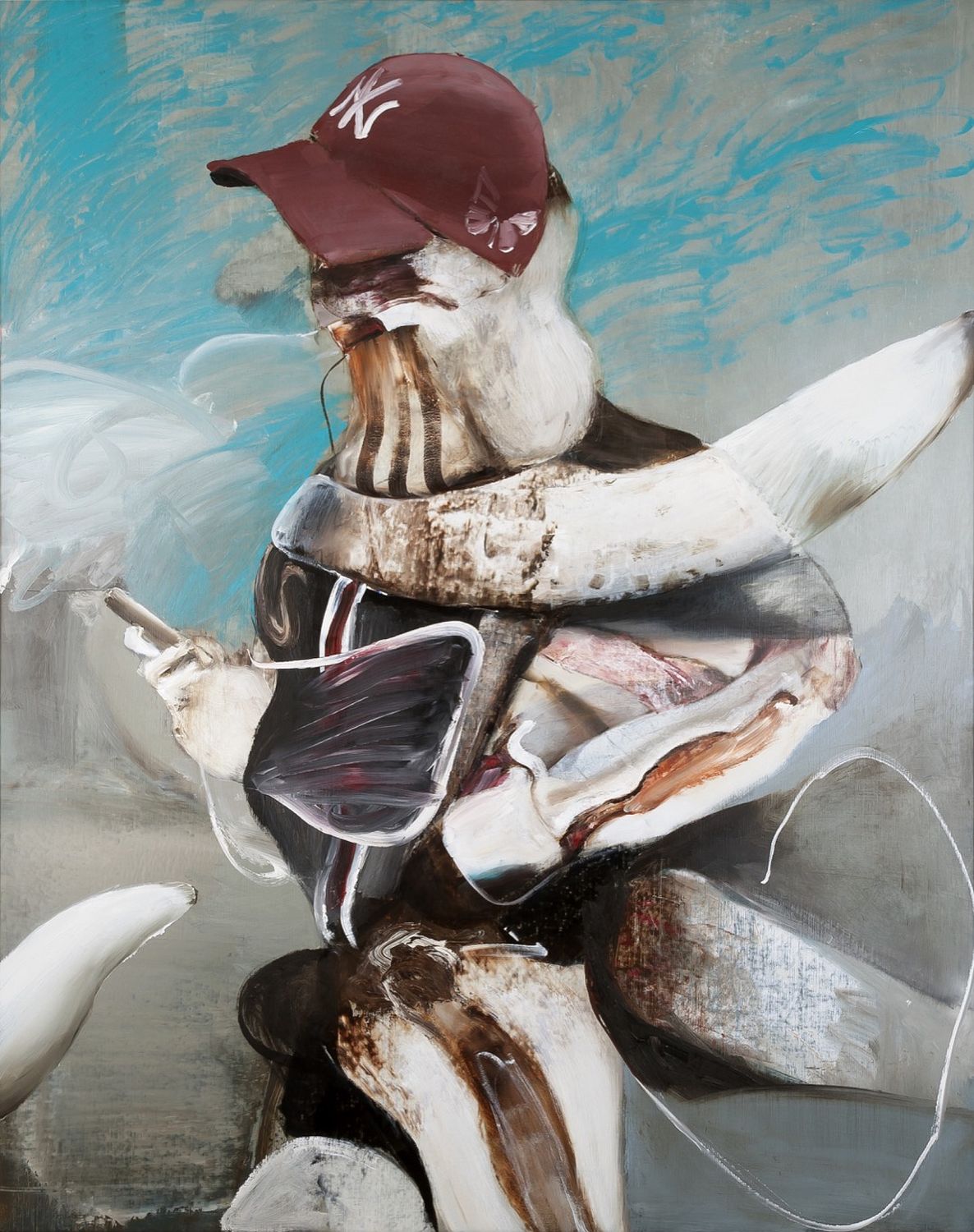 Thanks to Assicurazioni Generali, the Gallery's main partner since it was reopened in 2014, and for many years also a patron of the Fondazione Giorgio Cini, the exhibition season will run until 18 November 2019.

One of the most celebrated painters of his generation, Adrian Ghenie combines in his works personal memories and collective trauma, both past and present. His paintings engage not only with the history of painting, but with “painting the texture of history” and the personalities whose actions have defined its course. Investigating the possibilities of paint as a medium is always central to Ghenie’s practice and by fusing the grand themes and narratives of historical painting with figures from today and current affairs, the paintings become less about the subject and more about the act of painting itself.
The Battle Between Carnival and Feast presents recent paintings, a number painted specifically for this exhibition. On one hand they reflect the rich maritime history of the city with its many waterways, and on the other the conflict and turmoil caused by today’s geo-political issues. The theme of water unites these works, which are painted in an aqueous palette of deep-sea greens, vivid blues and shimmering greys. 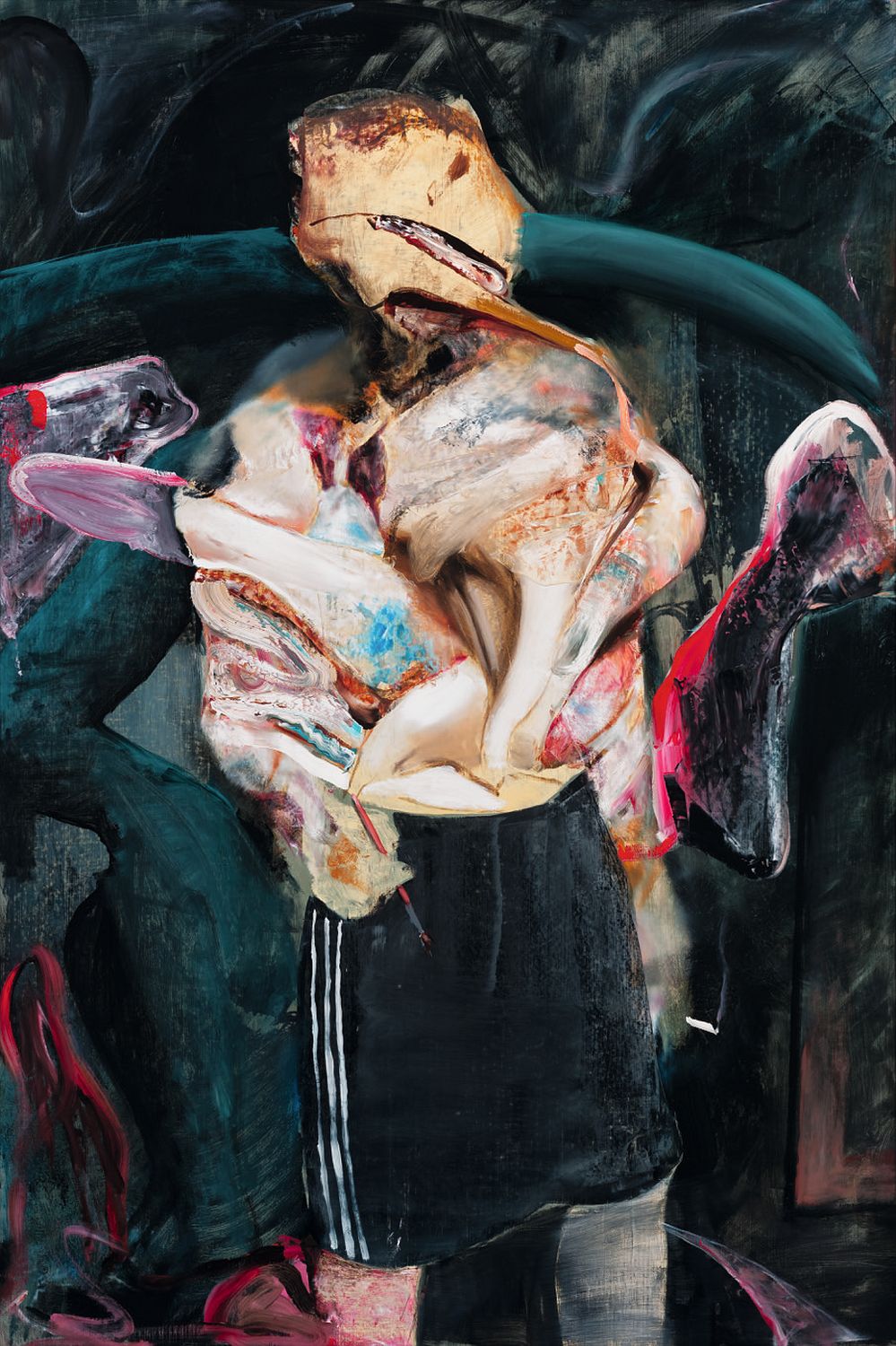 “Once again the Palazzo Cini, in concomitance with the Venice Art Biennale, has revealed a great capacity to pick up on its radar significant contemporary developments by presenting to the public an extract of the results of some of the most extraordinary pictorial explorations of our age”, comments Luca Massimo Barbero, Director of the Fondazione Cini Institute of Art History, who conceived the exhibition series that since 2015 has made such a lively impact on the second floor of the Palazzo Cini. The masterpieces of historic art permanently displayed in the gallery inspired both Ettore Spalletti’s exhibition Palazzo Cini (2015) and Afterglow: Pictures of Ruins (2017), a solo show by Vik Muniz, another internationally renowned artist. “Painting is still an extremely vital force”, Barbero continues, “able to express the great complexity of our time, and in Ghenie’s work it is the medium for a powerful synthesis of contemporaneity, history, beauty and the grotesque.”

The Raft, the largest painting in the group, is a vast ‘Neo-Baroque’ composition that reveals a floating life raft surmounted by a mass of vulnerable, naked legs and feet, set against a tumultuous sea and sky. The painting is reminiscent of the harrowing images we see in today’s news, showing the perilous journeys that refugees are forced to make to flee conflict. It can also be viewed as a contemporary analogue to The Raft of the Medusa (1818–19) by the French Romantic painter Théodore Géricault, which depicts the survivors of the wrecked naval frigate Méduse clinging to a raft after their ship ran aground in 1816.

Another large horizontal painting entitled The Drowning, the most cinematic in the group, initially resembles a huge aquarium but upon closer inspection reveals a partially decomposed body floating above tropical fish and vivid seaweed. Figure with Dog is dominated by an enormous partially clothed figure, standing near a petrified squatting dog and set against a Rousseau-esque landscape. Half woman, half monster, the figure’s enormous twisted mass of flesh and hair simultaneously seduces and repulses the viewer.

Three portraits, smaller in scale, illustrate the artist’s interest in deconstructing the genre of portraiture. In these works, he approaches the face as a landscape, its features obliterated by a textural smudge that hints at the underlying anatomy without depicting it.
At the heart of Ghenie's portraiture is his fascination with the uniquely human ability to anthropomorphise abstract signs and symbols, mentally filling in the blanks so that not only do we read a faceless figure as a portrait, but the subject is recognisable.
Above all, these works are united by Ghenie’s emotive handling of paint, which he scrapes and manipulates on the canvas to create a pictorial palimpsest superimposing the controversial themes of history, politics, ideology and mass media, where meaning always remains unfixed. 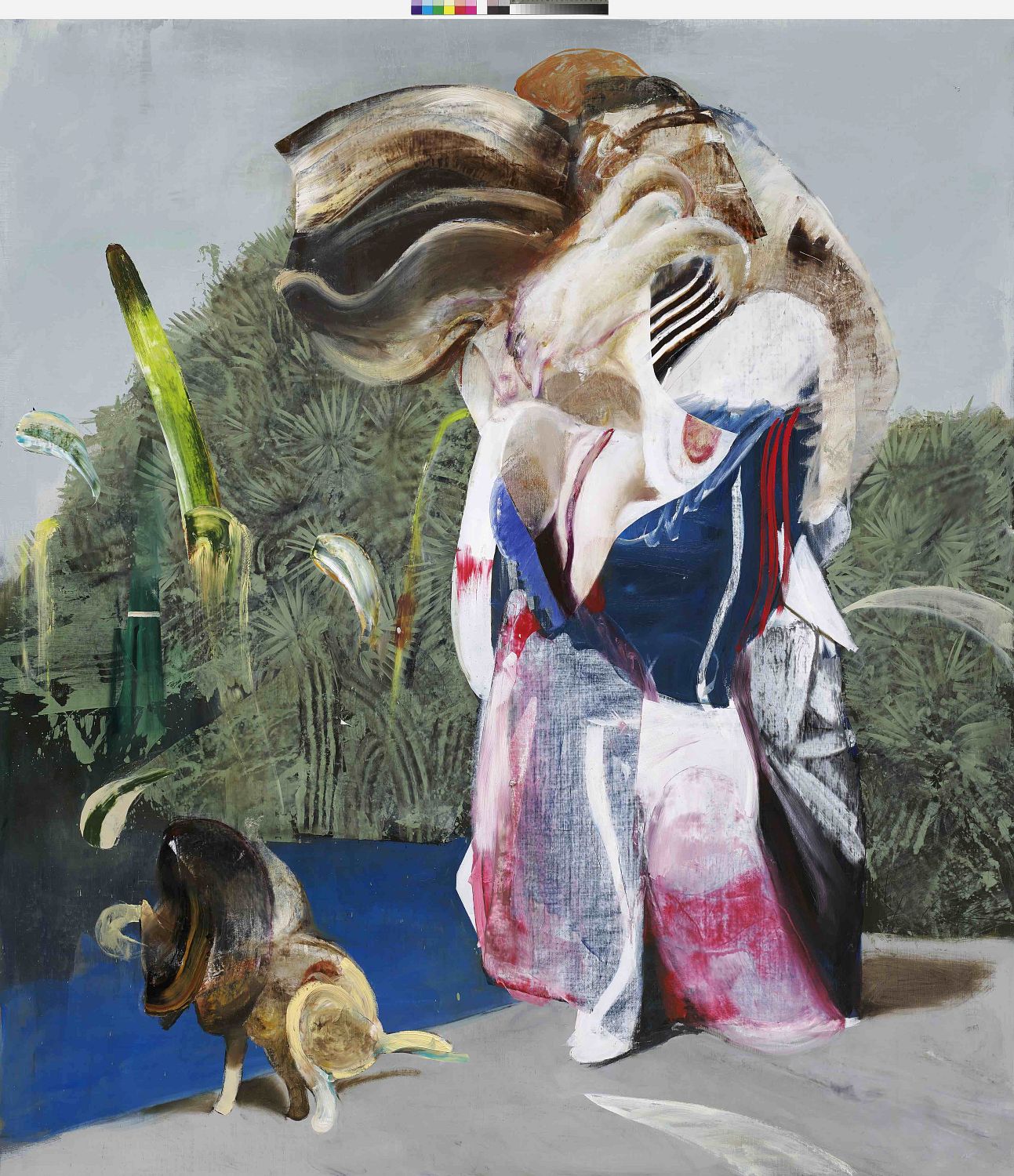 In 2015, Ghenie’s presentation for the Romanian Pavilion at the 56th edition of the Venice Biennale Darwin’s Room cast light on his complex and multi-layered painterly universe. His exploration of the notion of survival drew upon theories of biological evolutionism and the ways in which they have been consciously misinterpreted to transform societies. Lóránd Hegyi wrote in the catalogue: “The paintings of Adrian Ghenie present themselves as a gigantic theatre, an unusually deep, semi-dark, quite inscrutable, and extremely densely arranged stage, enlivened with impressive light effects … His painting is sensuous, immediate, lively, suggestive, and dynamic, despite being simultaneously very structured and balanced.”

The bilingual (Italian and English) catalogue for The Battle between Carnival and Feast includes an introductory text by the director of the Institute of Art History, Luca Massimo Barbero.

Adrian Ghenie was born in 1977 in Baia Mare, Romania. He currently lives and works in Berlin, after having graduated from the University of Art and Design in Cluj, Romania. In 2015, Ghenie represented the Romanian Pavilion at the 56th edition of the Venice Biennale and he has had major exhibitions worldwide. His installation The Darwin Room of 2013–14 is currently on view at Centre Pompidou, Paris until December 2020, the second of his installations presented as a ‘room within a room’. The first, The Dada Room, 2010, is now in the permanent collection of S.M.A.K. Ghent. His previous solo exhibitions include the Villa de Medici, Rome; CAC Málaga; Museum of Contemporary Art, Denver; Stedelijk Museum voor Actuele Kunst (S.M.A.K.), Ghent, and National Museum of Contemporary Art Bucharest. He has also participated in exhibitions at the Palazzo Grassi and François Pinault Foundation, Venice; Fondation Van Gogh, Arles; Tate Liverpool; Prague Biennial; San Francisco Museum of Modern Art; Fondazione Palazzo Strozzi, Florence; Centre Pompidou, Paris, among others.